The Vault of Athena is the second major Vault you’ll come across in Immortals Fenyx Rising, and it’s a pretty tricky one. You’ll have to complete many different puzzles in order to move four statues into the correct places, fighting the hideous Medusa in between each stage. There’s a lot here that can trip you up, which is why I’ve put together the below Vault of Athena walkthrough, which will show you how to complete every part of this Vault and return home safely.

After you arrive in the Vault of Athena, head through the large doorway and you’ll find two pressure plates. To the left and the right are two pairs of cubes. Each pair has one small and one large cube, and the two cubes are linked, which means you can use the smaller cube to move around the larger cube. Pick up each small cube and use it to position its larger counterpart on the pressure plate to proceed.

The next section again has two pressure plates, and there’s a pair to the left and another to the right. This time you have to jump across gaps to reach each pair and bring it back, but the smallest cube on the left allows you to double jump while holding it, which will help you get back. Place both large cubes on the pressure plates to unlock the next section. 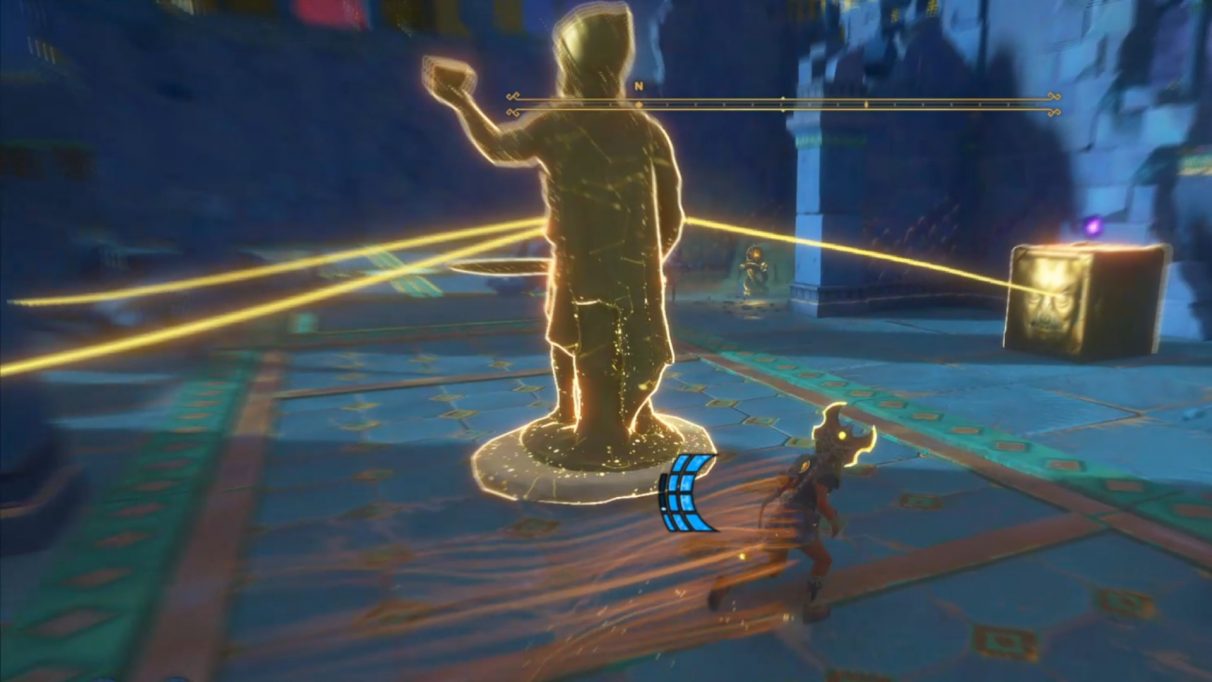 Each of the four statues must be moved via their linked cubes towards the centre of the Vault.

Now you’ll see before you a statue, linked to three different cubes. These cubes can only be pushed forwards, and you must push each cube forwards as far as it can go in order to push the statue all the way to the end. Once you do, you’ll summon the first phase of Medusa, the boss of the Vault of Athena.

You’ll need patience and good dodging skills going up against Medusa. She likes to teleport around after every attack. Try to get those perfect dodges to slow time and get some good hits in. Also watch out for when she turns to stone. While in this form, you can’t damage or stun her, so just focus on dodging her attacks. 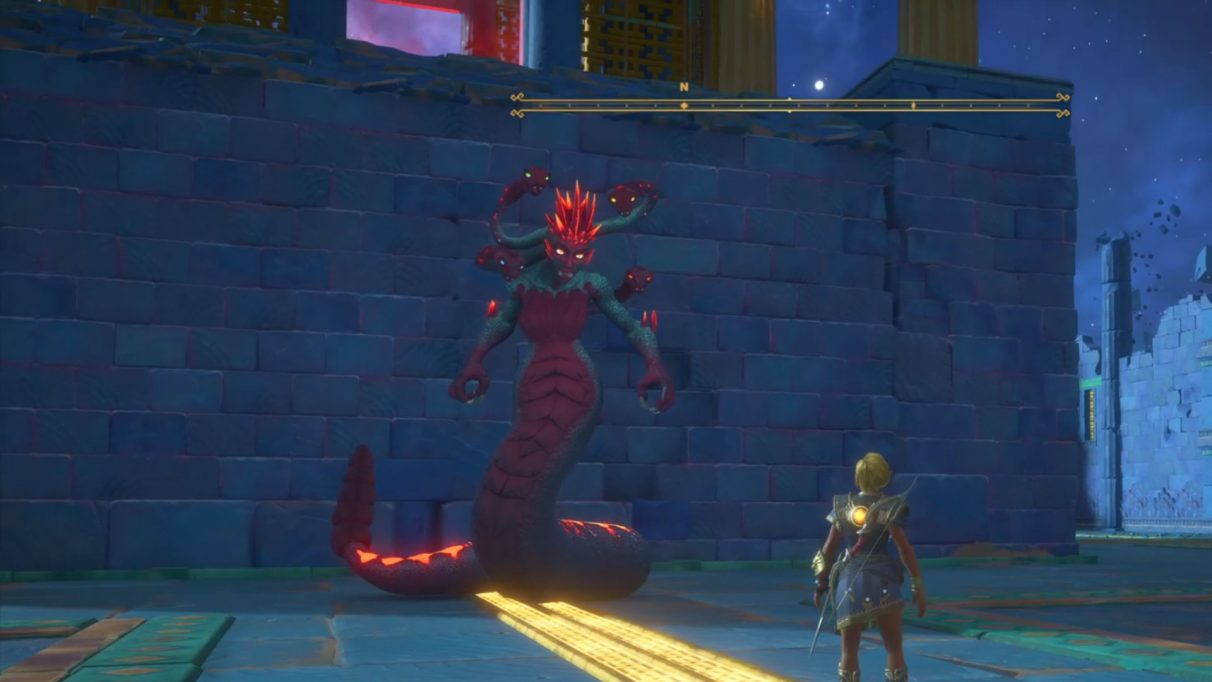 Medusa periodically turns to stone, during which time there’s no point in attacking her.

Looking around now, you should see what you have to do. There are three other pedestals like the one you pushed the statue onto, one for each cardinal direction. You must head in each direction and unlock and move the statue onto the pedestal in order to retrieve Athena’s Essence. It doesn’t matter the order you do them in, so feel free to do these sections out of order.

Continue north until you reach a checkpoint and another pair of cubes. Use the small cube to position the large cube on top of the platform of spikes to the left. Then climb onto the large cube and jump to the next platform. 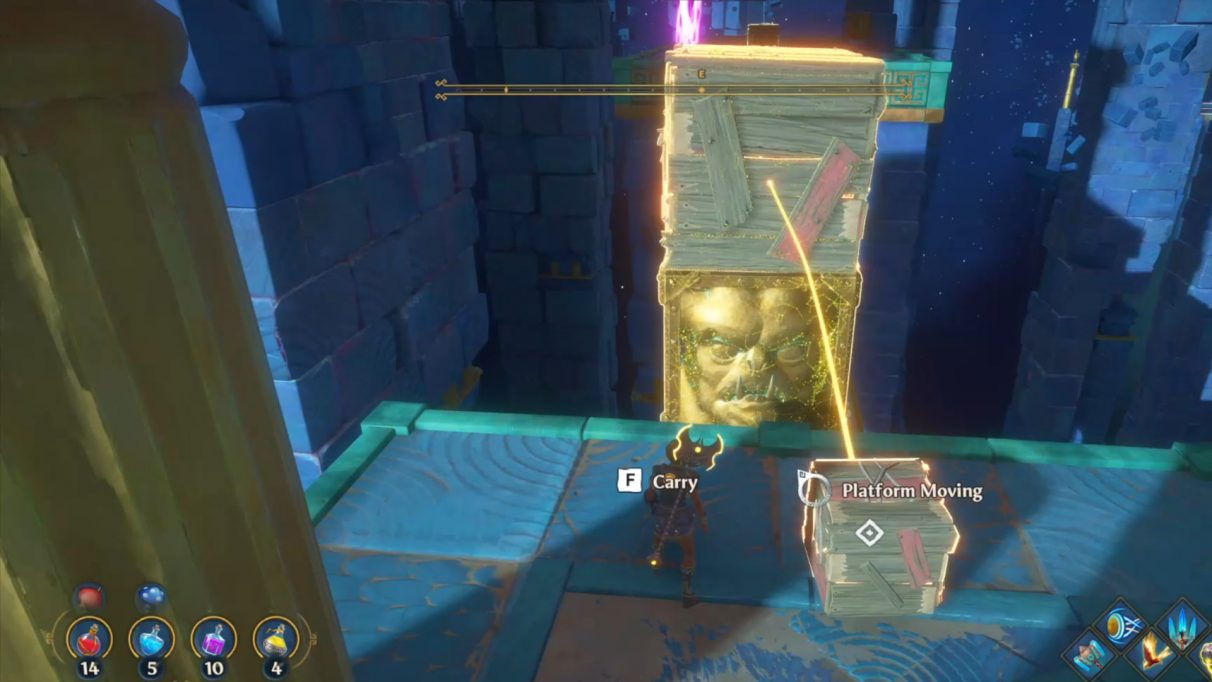 Once again, press the button at the top to spawn the next pairs. For this final section on the north statue, you have to stack three cubes on top of the spikes to get to the very top. Start with the solid cube at the far end, before moving onto the left-hand side wooden cube. With two stacked, you can jump across and reach the final cube you need to get to the very top. 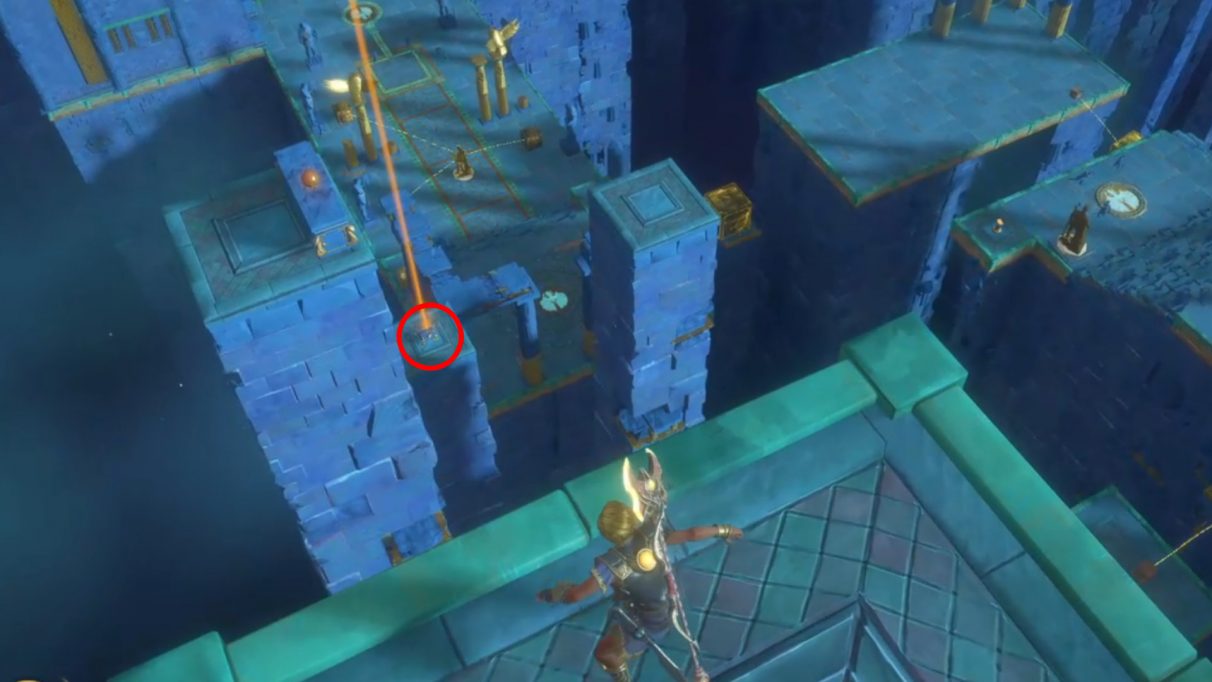 From the top of this section, you’ll be able to see the chest on the platform below (circled in red).

At the very top, press the button to spawn the final cube linked to the statue below. You may also notice that between you and the statue there’s a tiny platform with a chest on it, so feel free to glide down and open it on your way back. Then all that’s left is to push the statue cubes just like you did with the first statue until it clicks into place.

This will spawn the second stage of Medusa. She’s much the same as before, except now she has a potent attack which calls down two large red beams from the sky that move around a bit. Just dodge out of the way and you’ll be fine. 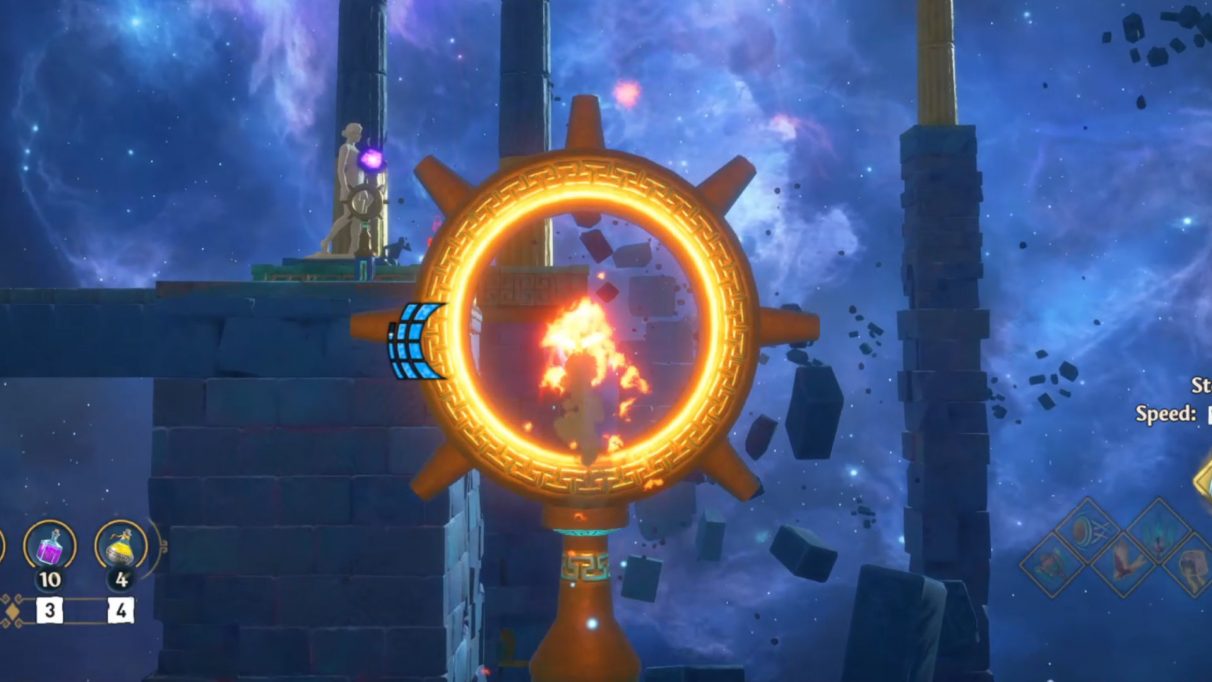 The west side of the Vault of Athena requires you to shoot flaming arrows through hoops to light the far torches.

Now head to the west side. There are three lanes here, and each one is like a mini arrow challenge: you have to shoot a flaming arrow through the hoops and light the torch at the end of the lane. The trouble is there are a load of giant cubes blocking the arrow’s path in each lane, so you have to carefully move the cubes (via their small linked counterparts, of course) out of the way. But make sure the wooden and stone cubes don’t touch the spikes or they’ll be destroyed and respawn in their original position.

Not much more to say with this part, it just takes a little caution. Light the three torches, push the statue into place, and fight the third phase of Medusa. This time she has her nastiest ability yet, which is a three-shot beam that has a large AoE where it hits, and petrifies (read: really really slows) you if it hits you. That attack is pretty damn hard to avoid, but the good news is it doesn’t deal too much damage, and Medusa never capitalises on your vulnerability. 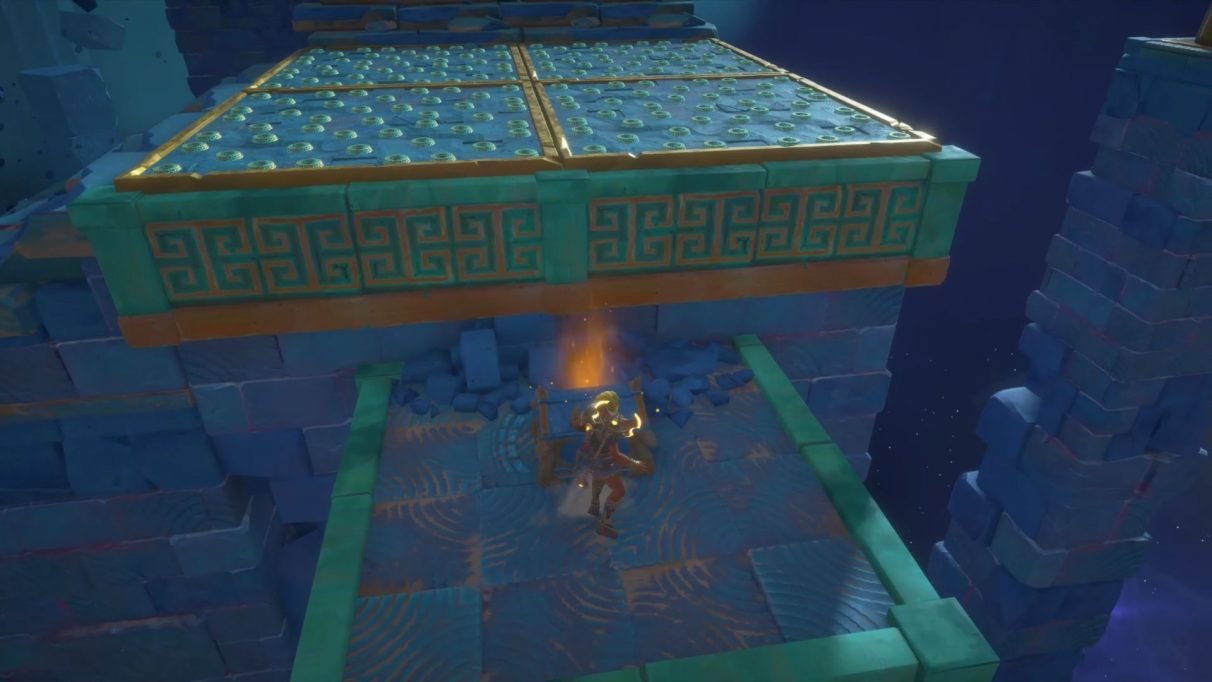 When you see the 2×2 floor of spikes, look around the edge until you find the hidden chest.

The central idea of the east side puzzles is that you have to transport the large cubes carefully through an obstacle course of spikes and lasers which will destroy the wooden cubes if there’s any contact. Once again there’s not much explanation required here. It’s more of a mild parkour exercise. Just remember to put the cubes down when you need to recoup lost stamina.

Two notes here: when you get to the corner with the large floor of spikes, look just beyond the platform and you’ll find a hidden chest that you can open. 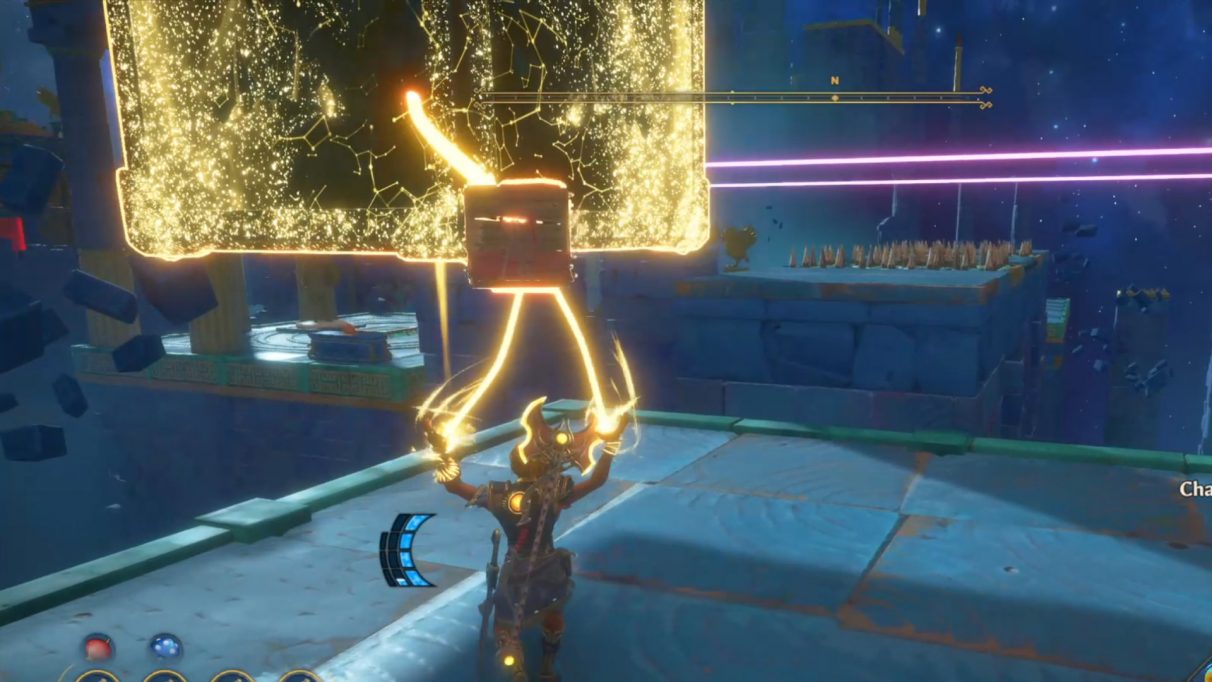 The solid cube can be used to block lasers while you carry it.

The other note is that the final cube is solid, and therefore won’t be destroyed when in contact with spikes and lasers. This is important, because you’ll need to shield yourself from the lasers with the cube while you’re moving it along.

After the cubes are on their pressure plates, you can go back to the start of this section and push the statue into the right position. This will spawn the final phase of Medusa, who’s as angry as ever, but doesn’t seem to have any new moves since the last encounter (or maybe I just killed her too quickly to notice…). This time when you kill her she’ll stay dead. The centre of the Vault will finally open up, revealing Athena’s bottled Essence trapped inside for you to take and escape the Vault.