On December 15th, Valorant will see its first ever Christmas update, and what better way to celebrate than to pelt your pals with snowballs in a new limited-time game mode. Of course, no snowball fight is complete without a grenade launcher and knives, right? In Valorant’s Snowball Fight, you’ll be loading up some snowy doom into a rigged molotov launcher, and you’ll have your trusty knife to finish the job if the frostbite doesn’t take down your enemies.

This new mode is a 5v5 team deathmatch. Players respawn when killed (or, when whacked with snowballs) and the first team to reach 50 kills wins. It takes place on the new Icebox map, which will have its halls decked in all manner of merry ornaments and giant candy canes. 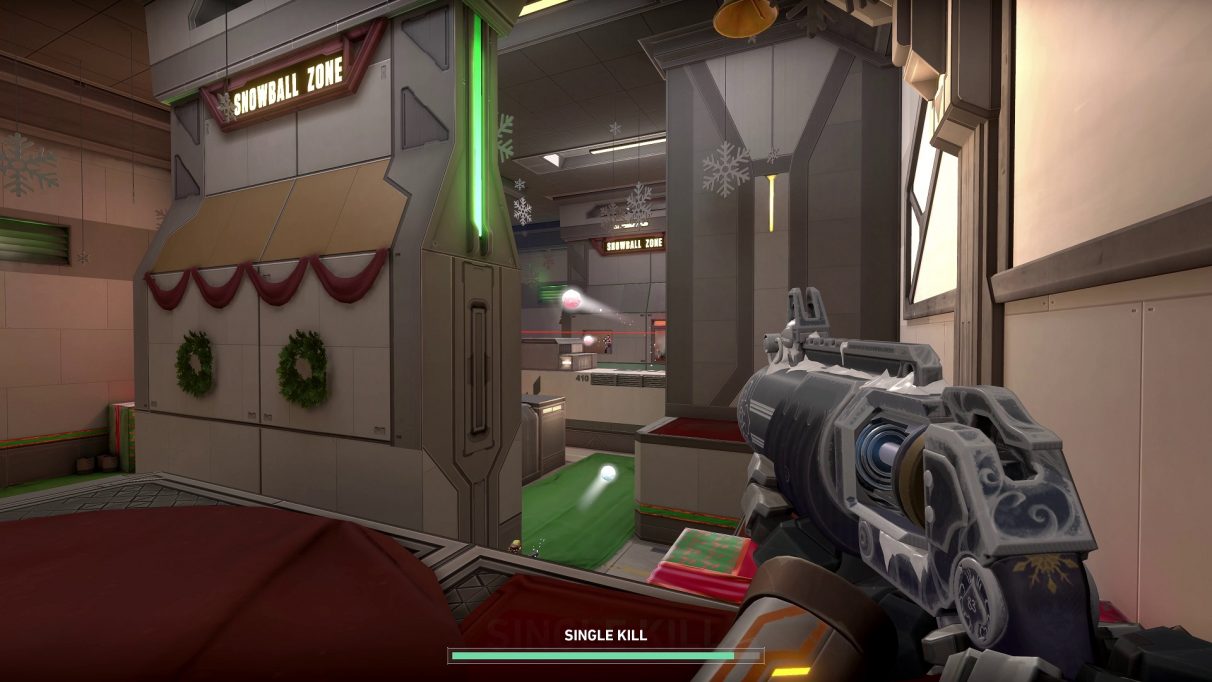 I don’t normally like Icebox… a nice Christmas mode could sway me, though.

Now, you won’t be picking up snowballs with your bare hands, instead you’ll be using an icy version of Brimstones molotov launcher – so you’ll need to lead your shots to actually hit people. Snowballs are infinite, though, so fire as many as you like. Though, uh, you will have your knife as a melee weapon still, which makes zero sense. Please do not bring a knife to a snowball fight.

Similarly to the Spike Rush mode, power-ups will spawn around the map to give you a bit of an edge – things like rapid fire and ricochet, and even some skates so you can zoom around the ice. They aren’t boring little orbs, however, they’re shaped like delightful festive gifts.

I love a good seasonal event, me. Especially in a game like Valorant, where most of the other game modes are super competitive. It’s nice to have something to mess about in, which is something the Valorant devs have wanted to put into the game for a while.

“We want to provide places where players can wind down after a long session, or simply hang out with their friends of all skill levels to have some casual fun. To that effect, we’ll be focusing on these types of modes in the first half of the upcoming year. More to share soon!”

Snowball Fight is live from December 15th until December 29th, and playing a match will earn you a free snowy gun charm, too.

While you’re waiting for the mode to arrive, don’t forget Valorant got a brand new agent last month. Her name is Skye, and she’s a bird-throwing Aussie.