Players of Cyberpunk 2077 will likely have noticed a hacking minigame appear a great many times throughout V’s journey. This minigame will appear when you use Breach Protocol on an enemy, but it can also be used on certain machines and access points to get extra money. It’s a fairly confusing minigame that isn’t well-explained by the game, but our Cyberpunk 2077 hacking minigame guide will walk you through exactly how it all works, so you’ll never be confused again by this strange screen of codes and sequences.

There’s been a lot of confusion around the Breach Protocol hacking minigame in Cyberpunk 2077, because the game really doesn’t explain it very well. So I’m going to make this as simple and easy to follow as possible.

Your aim with this minigame is to use the grid on the left to complete the sequence (or sequences) on the right. There are four parts to look at every time you enter the Breach Protocol hacking minigame: 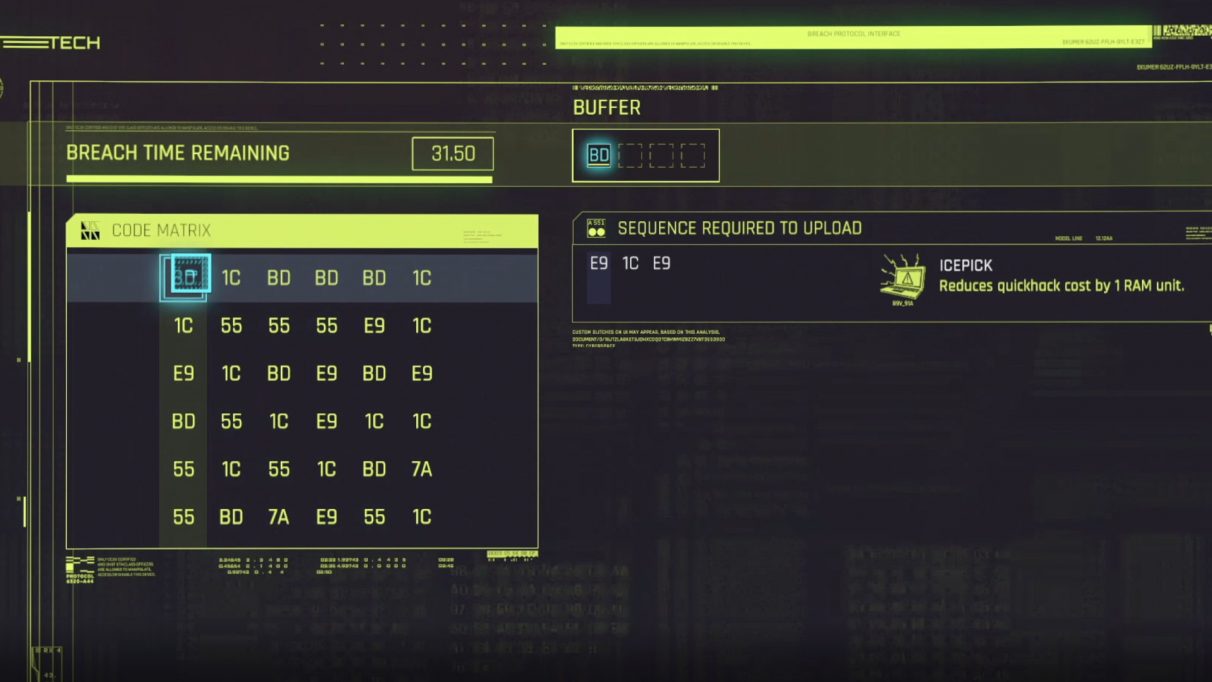 I have to use the grid to create the sequence E9-1C-E9, but I can only work with a single row or column at a time. Every time I pick a tile, I’m also picking the row or column from which I’ll have to pick my next tile.

Let’s take the example in the screenshot above. Here, I have just one possible sequence, which means my aim is to use the grid to create the sequence E9-1C-E9.

You don’t have the full grid of tiles to choose from, though. At any given moment, you can only choose tiles in a specific column or row. With each click, it switches between column and row, and you have to stay on the same line as the previous tile you picked. Think of it like a game of Snake. You have to move in right angles. 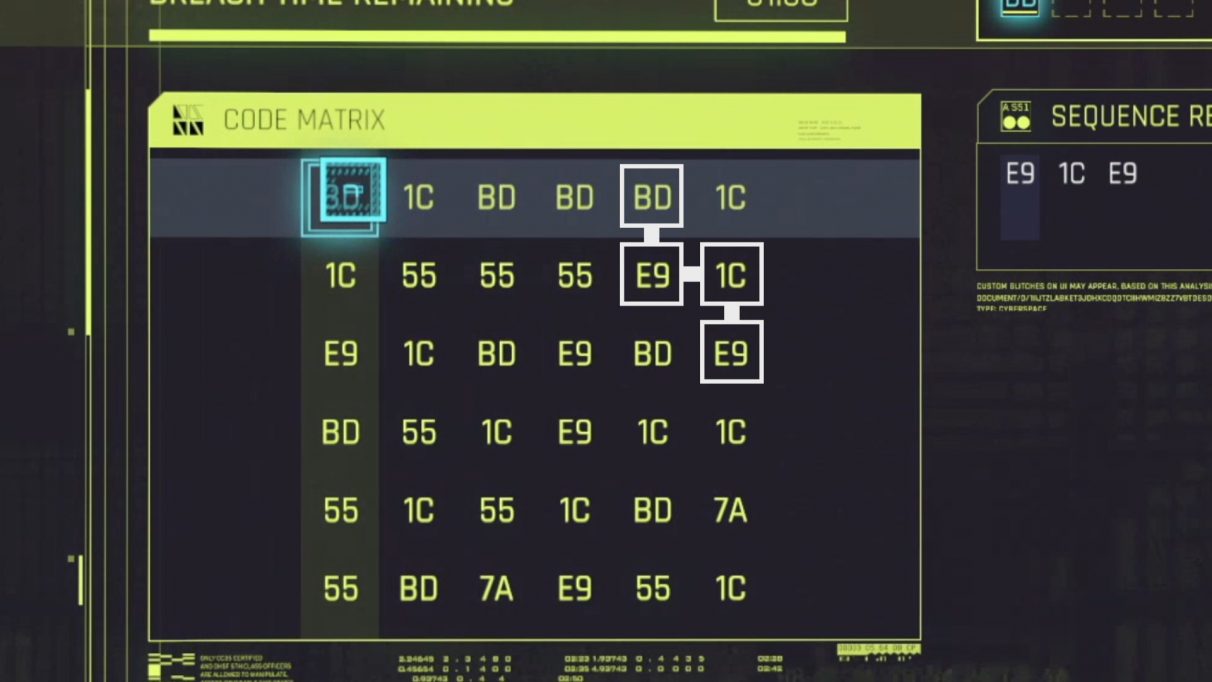 I have to start by picking from the top row. In this case, there’s no E9 in the top row, so I have to waste my Buffer in order to reach an E9 in the 4th column. From there, I can complete the sequence as illustrated.

How does the Buffer work?

You only have a certain number of tiles you can choose, as shown by your Buffer. So in the screenshot above, I have four clicks available. Taking the example in the screenshot, my first tile is allowed to not fit with the sequence, as long as the remaining three are correct.

So if I were to choose BD-E9-1C-E9, then that would still be a success, because I’ll still have completed the sequence E9-1C-E9. And in fact, this is how I would have to do it, because you can see on the top row there is no E9 to pick for my first tile.

But I can’t break the sequence up with an incorrect tile. So if I were able to create the sequence E9-1C-BD-E9, then that would be a failure even though I picked all the right tiles, because I broke up the sequence with that BD.

Sometimes your Buffer size won’t be enough to allow you to solve multiple sequences at once (see below). But you can upgrade your Buffer size by getting Operating System cyberware upgrades from a Ripperdoc. 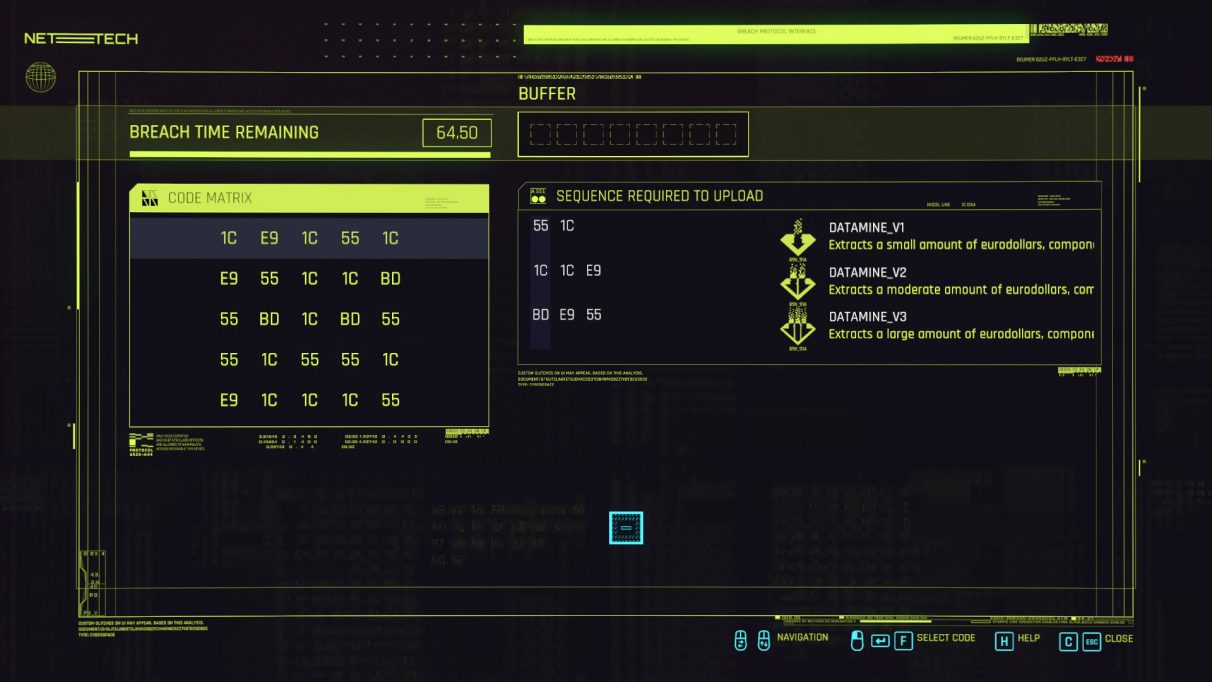 This is a more challenging version with three different sequences that can be completed. Scroll down to see the solution.

The Buffer is how you are able to complete multiple sequences at once. Taking a look at the more complex screen above, you can see there are three sequences that can be completed, each of which gives a different amount of money for your trouble. Ideally, you’ll want to complete all three, which means you’ll want a long sequence comprised of all three smaller sequences. You can overlap these sequences too, so for example the sequence:

…will complete all three sequences. Unfortunately, in this case, there’s no BD on the first row. Thankfully we have a Buffer size of 8, which means we can waste a couple of tiles in order to create this sequence. In fact, we only need to waste one in this case, by starting with the 1C in the top-right. This will allow us to create the following sequence:

…and this will give us all three sequences, and net us a generous amount of cash and components. 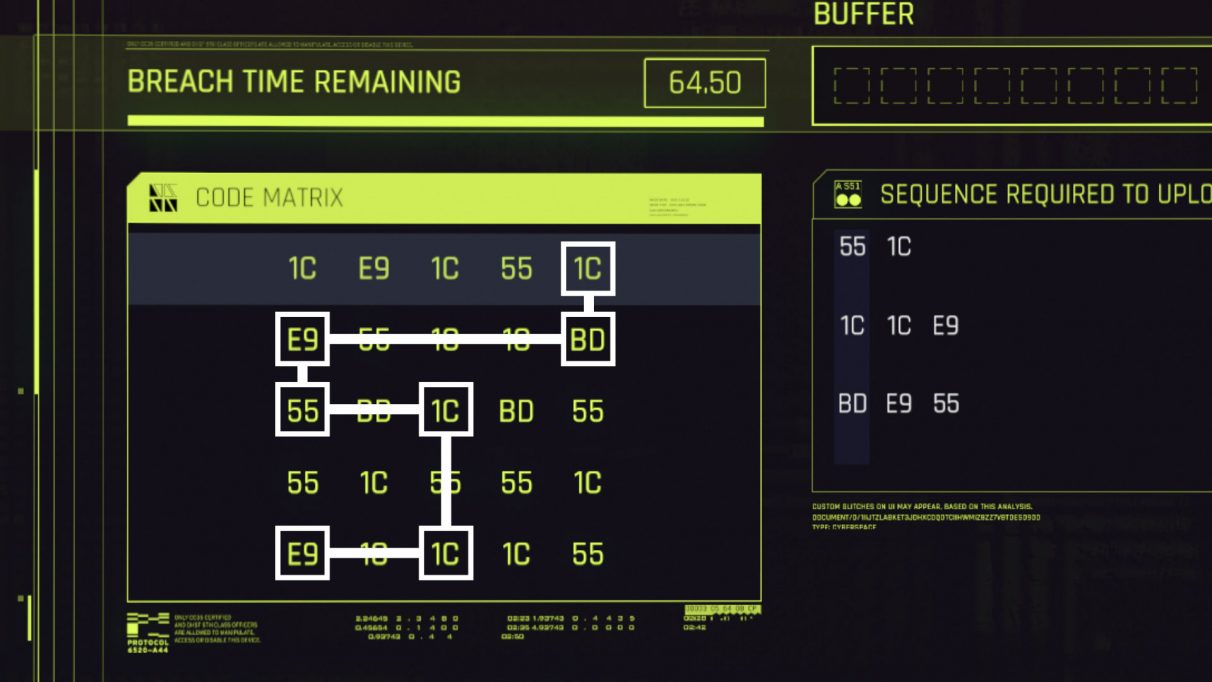 The solution to the above puzzle. You must use up part of your Buffer in order to reach a “BD” to start off your sequence.