Crafting is an often overlooked system in Cyberpunk 2077, and many players will complete a playthrough without so much as glancing at the crafting screen. But once you understand the basics, crafting becomes an extremely powerful (read: utterly overpowered) tool for generating infinite money and giving you the best possible gear. Our Cyberpunk 2077 crafting guide will walk you through how crafting works, how to get infinite crafting components and money, how to farm Legendary crafting components, and more.

Crafting in Cyberpunk 2077 is a pretty simple process – it’s just hard to see its simplicity behind the clunky UI design. Here’s what you need to know about crafting:

Many players overlook crafting on their first playthrough, only to realise its power later on. Crafting not only allows you to keep your favourite gear relevant and powerful, but it is also the gateway to infinite money – as you’ll see below!

How to get infinite crafting components (and money!)

Crafting can get a little broken in Cyberpunk 2077. Thanks to a couple of perks in the Crafting perk tree, you can gain extra components from disassembling items, and you can make use of this to give yourself potentially infinite components and infinite money. There are lots of ways to do this, but here’s one of the simplest methods:

This is an endless loop that gives you more components and money than you started with, in exchange for nothing but a bit of your time. The next time you do this, you’ll be able to buy even more vending machine items and disassemble them for even more components.

For more ways to get rich quick, be sure to check out Jake’s guide on how to make money fast in Cyberpunk 2077! 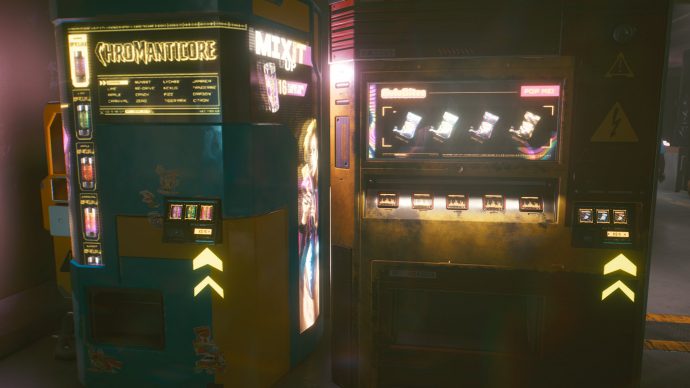 Buy $10 items from vending machines, disassemble them, then use them to craft and sell guns. Rinse, repeat. Infinite money, infinite components.

The very best equipment you can craft in Cyberpunk 2077 requires Legendary crafting components – the rarest kind, distinguished by its gold colour. Thankfully, you can use the same broken crafting perks mentioned above (Mechanic and Workshop) to farm Legendary components. It’s also a good idea to pick up the Ex Nihilo and Cost Optimizations perks while you’re at it, because they will make this method even more efficient.

One more perk that you absolutely need for this method is Edgerunner Artisan (unlocked at crafting skill level 18), because you need this in order to craft Legendary items.

Then, disassemble all those items you just crafted. Thanks to the perks you’ve picked up, there’s a very high chance that you’ll end up with more Legendary crafting components than you started with, and it cost you absolutely nothing. Repeat for as long as you like, to get as many components as you wish. This same method can be used to craft all the different rarities of components.

To expand your library of possible items and equipment to craft in Cyberpunk 2077, you’ll need to procure crafting blueprints. These blueprints can be purchased from vendors across Night City. They’re fairly pricey, often costing thousands of eurodollars, but once purchased you can craft that item as many times as you like from that point onward.

Different vendors stock different crafting blueprints, and the type of vendor generally matches the type of blueprint item. So if you’re after cyberware, you’d best check the trading tab of your local ripperdoc; whereas if you’re after guns, your best bet is to head to one of the nearby gun icons on the map.

Hopefully this guide has answered any questions you may have had about the crafting system in Cyberpunk 2077. If you’re interested in expanding your repertoire, you may want to take a look at our guides on procuring the Cyberpunk 2077 Mantis Blades, or the equally useful Cyberpunk 2077 Gorilla Arms.