Cyberpunk 2077 may not have any aerial vehicles, but thanks to mods, you don’t need them to get V airborne. A modder has created the Freefly mod, which allows players to take off into the air at the touch of a button. I had a go of it and it works pretty well. Seeing Night City from a brand new angle is great – just beware some weird bugs if you try and use it with other mods.

“NexusGuy999’s” Freefly mod works almost a bit like Minecraft’s creative mode. You’re able to jump into the air by pressing your space bar, then control your movement and whoosh around using WASD. To go down you’ll need to point at the ground and hold forward, or let yourself drop gently by tapping the space bar. Check me out giving V little test flight in the video below.

Soaring over Night City is a little jittery with this mod. It’s pretty cool if you wanna get some funky aerial shots amongst the towering skyscrapers though, and offers a nice new perspective of some areas that you wouldn’t see otherwise. Just don’t disable the mod while you’re in the sky, or you’ll cause V to plummet to ground and break her ankles.

There are a couple of weird and slightly broken things about this mod, however. The first is that it makes it so you’re able to zoom through buildings and even underneath the map. Unfortunately, most buildings have nothing inside them so they’re pretty boring, and going out of bounds underneath everything is just pure scary.

I also found that reloading saves breaks the mod a bit, making it so that the second you stop pressing a button to zoom through the sky, V will begin to plummet to ground. Reloading also made V travel faster when doing these zoomies, so beware of that one.

Freefly works with Cyberpunk’s third-person mod too, though V doesn’t really move in the air. She just kinda freezes and looks a bit bored. I wanted to mention this because the third-person mod has a known bug that makes V go headless sometimes. I had never actually experienced it myself, until I used third-person with the flying mod. I don’t know why or how using these together gave me the issue – maybe I just got unlucky – but switching my camera mode only to be met with a headless V 100 foot above the ground did give me a little fright (and made it very hard for me to get a nice header image, uh, literally). 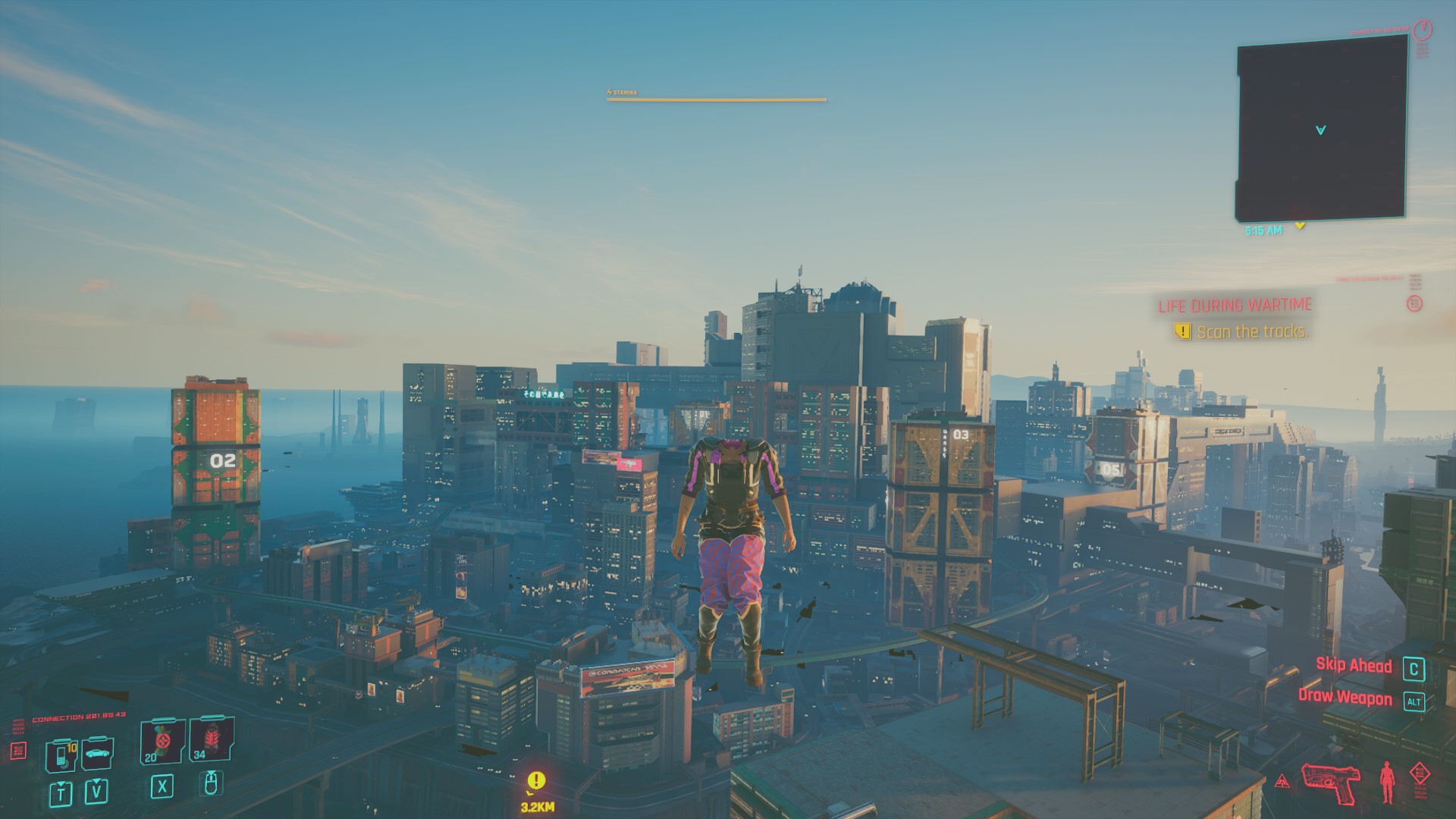 This was nearly my headless header, but I thought it might be nice if V had a face at the top of the article.

If you fancy having a go of all this yourself, you’ll first need to install the Cyber Engine Tweaks mod by “Yamashi” (which also adds some bug fixes and tweaks). You can download the Freefly mod here, then you should extract the files into the path that ends with Cyberpunk 2077\bin\x64\plugins\cyber_engine_tweaks\mods. After that, simply load up your game and press 5 to activate your flying abilities.

In his Cyberpunk 2077 review, Graham called the game “a big, beautiful, broken mess”. CD Projekt Red have already released a bunch of bug fixes though, with more patches to come over next couple of months. Perhaps one day the game will simply be big and beautiful.

For now, at least, fans have made plenty of good Cyberpunk 2077 mods to help fix things up here and there.