Probably the most common woe, for all but the most unnaturally gifted players of real-time strategy games, is the feeling of being overwhelmed. Particularly in games from the genre’s “golden age” in the late 90s, there’s a relentless need to focus on several things at once, and endlessly jump back and forth between combat and economy. Age Of Empires 2, beautiful beast though it is, is certainly no exception, even with the concessions to modernity introduced in its Definitive Edition last year.

However. What if I was to tell you there was a way to play the game, totally unmodded, in a way that eliminates this concern entirely? Well, as the bloke off of Pirates Of The Carribean once memorably said, “you’d best start believing in posts about weird, gestalt-consciousness Age Of Empires sessions; ye’re in one.”

Activating “hivemind mode” is, as it happens, an extremely simple business. First, you’ll want to host a multiplayer game lobby, as you usually would. Then, once you’ve got all your pals in there with you (you’ll need them on a discord voice channel or similar, too, for reasons I’m about to explain), you just have everyone pick the same team, the same civ, and – crucially – the same player colour. Have people select those things in that order, or I think it won’t work. You’ll need enemies as well, and map settings, but I’ve got some suggestions for you on that below. 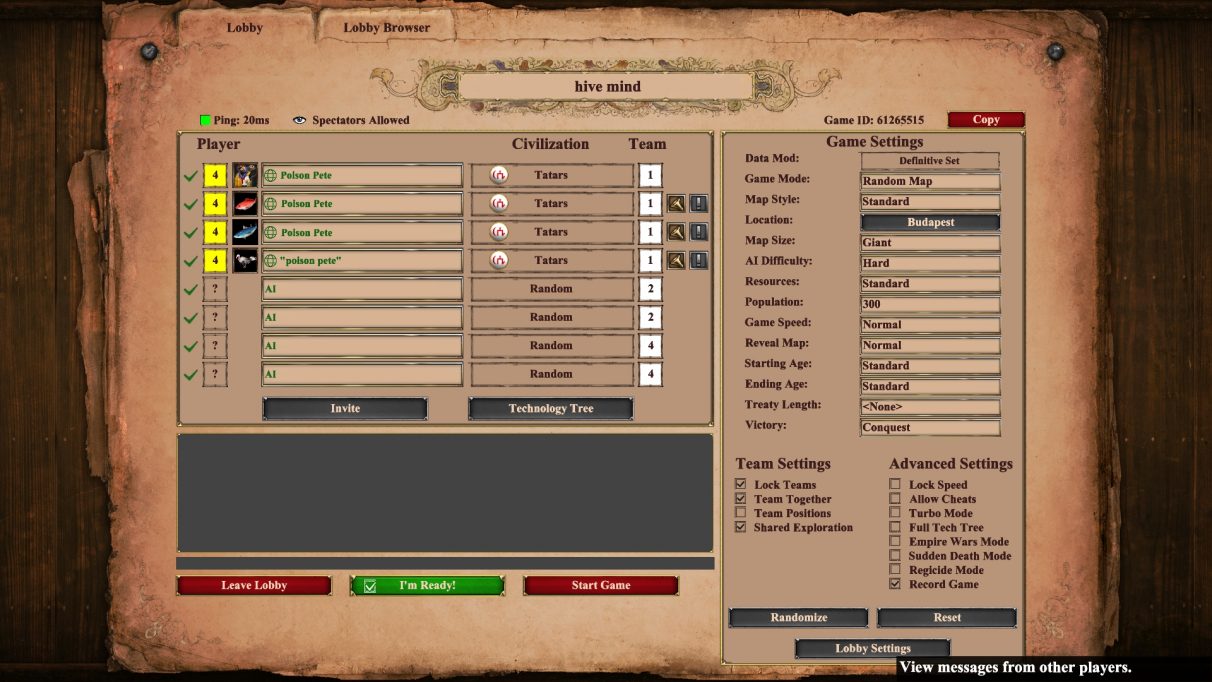 It is also just quite funny if everyone changes their screen name to the same thing.

When the game starts, the poor baffled computer will just dump everyone who’s selected the same colour into one player slot, and the fun can begin. It’s at this point that voice communication becomes vital, because there is absolutely no hierarchy in your collective consciousness. Everyone has full control over every unit and building, and without proper chat, players will end up wrestling over villagers, building multiple redundant copies of things, and never, ever getting to feudal age because some bastard keeps spending all the dinner on brutes.

Nevertheless, with just the smallest conflab before launch as to who’s going to take which responsibilities, you’ll find it works like a dream. With four people sharing a single civ, even a bunch of mediocre players like me can pantomime-horse their way to chillingly efficient play, trouncing several allied AIs with ease. Even with teams of two, where one person controls economy and the other military units, you’ll be astonished at how differently AoE2 plays. Honestly, it’s like being in one of those big lads off of Pacific Rim, only you don’t have sudden flashbacks to your mates’ past traumas. 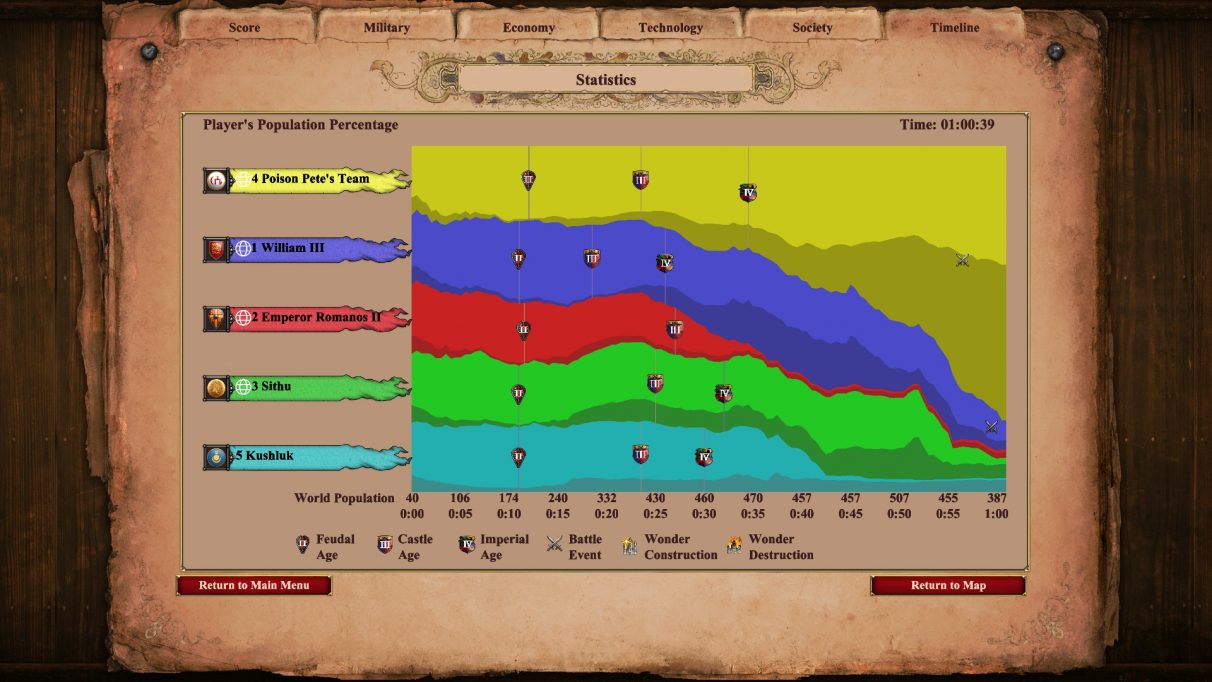 A picture may speak a thousand words, but in this case, a graph will batter your abdomen apart with a halberd.

AoE2’s military units, it turns out, are monstrously effective when someone is micromanaging them constantly, rather than leaving them to fend for themselves like hapless robot toddlers every time they need to sort things out back at base. Usually, high-level micro is something only enjoyed among the olympian heights of pro-level play. But with someone else looking after the town centre, you’re free to make life a nightmare for the enemy non-stop, like you’re the baddie in a weird terminator reboot where the skeletrons have been replaced with aggressive, toothless oafs. 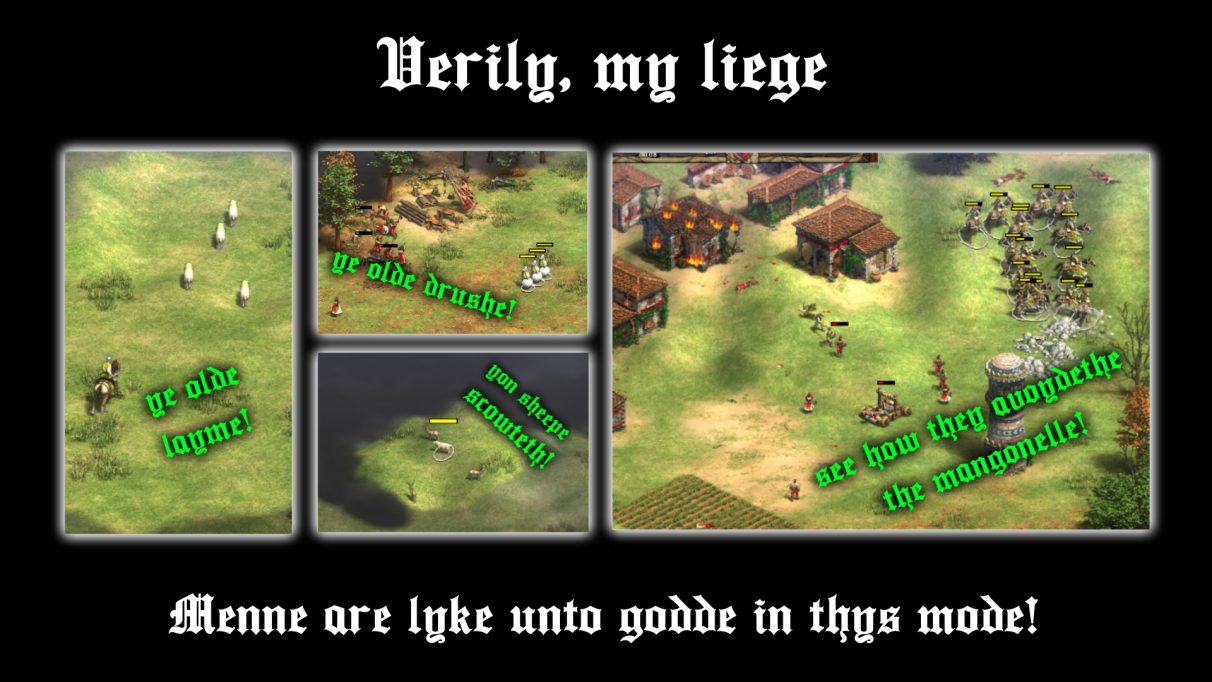 Clearly, this mode of play opens up quite a lot of interesting possibilities for multiplayer matches, and it’s worth experimenting with. But if you’ll allow me to be your AoE2 sommelier, I have a few suggestions for fun setups to try – let me know how you get on:

Would have loved to have called this one the Octopus, but you can only have a maximum of seven players on one team and still have an opponent on the map, so the Septopus it is. Anyway, in this mode you’ll want to play on a tiny map, with seven of you hiving up to take on a single AI at extreme level. This is potentially the only type of hivemind game that’s harder than its 1v1 equivalent, as there’s so much division of labour involved. Your teamwork will have to be top notch to avoid getting run down like a dog in the feudal age, as your villagers spasm helplessly between possession by multiple, selfish demons.

“No man is an island entire of itself; every man is a piece of the continent, a part of the main.” So said John Donne, who was famously shit at Age Of Empires 2. He probably would have enjoyed this game mode, though. TIP uses the Team Islands map, which of course everybody hates, but takes the crucial step of forcing each team into a single, simulated medieval mind. With two opposing hiveminds of two, three or even four players (ideally, each with its own discord channel), this usually-stilted war of attrition becomes an intense, tactically dynamic affair, with boats and horses and everything used to full effect. My AoE2 group has found that on a 4-person team, a split between economy, navy, invasion and defence makes for the best match.

This one’s about pushing everything to the maximum. You’ll want to play with AIs on their hardest setting (the one called ‘hardest’, not the actual hardest, confusingly called extreme), and 2-4 players in the hivemind. Obviously, you can play with this ratio depending on skill level, but the one we often go for is a four-player hive, versus two teams of two AIs. The map used is Budapest, since it starts you with two town centres, and it should be set to giant at the very least. The secret sauce? Setting the population cap from the standard 200 per side, to a mind-melting 500. AoE2’s enemy AI tends to outperform humans more and more as it scales up its resources, so when Gigawar gets to the Imperial Age, it’s a proper horror show. As hundreds-strong Von Neumann swarms of halberdiers rampage across the map with neither pity nor self-knowledge in their hearts, it can take four decent players just to hold back the swarm, let alone pull off a win. Cracking stuff.