The blessed boys and girls of Valve were showing off some VR games for the upcoming Vive Pro at the Game Developers Conference last week. They were encamped near the press room in a large chamber split up into little shacks, each running a game such as the robot-avoiding comedy stealth of Budget Cuts, or the sunbathing relaxation of Vacation Simulator. I went on a rapidfire journey through this shantytown of virtual reality, jacking into game after game, each lasting about 20 minutes. The results: this round-up, and an intense visual migraine that rendered me incapable of reading for a full 5 minutes. I’m being serious. I thought I was having a stroke.

But enough about visual anomalies that float around the inside of your eye like a terrifying optical aurora, let’s talk videogames. Here are the strange worlds I entered and all the ways in which I tried to undermine the developers from inside their own game. Sorry, VR fans!

Museum of Other Realities

An otherworldly art gallery, in which I was guided by one of the curators. He tried his best to herd me in the correct direction while chatting about the artists on display. Look at this monochrome sculpture of hard-working human, he’d say. And here’s a colourful explosion of floating bubbles. And over here, a wide landscape which you can enter by shrinking down to the size of an art-loving rat. But I was only half listening, hopping about using the handheld controllers to warp instantly from one art piece to another, zapping around like a caffeinated Nightcrawler as my poor guide tried to keep me in sight.

“What’s this!” I’d ask, now several feet from where he stood. Oh, that’s by Liz Edwards who –

What’s this! That’s a Danny Bittman piece that –

Boop. And I was off again. But only because it was such a wonderful building, full of multi-dimensional madness and portals to impossible scenery. My time ran out before we reached “the Ghoul room”, which upset me.

Verdict: Better than the Guggenheim. 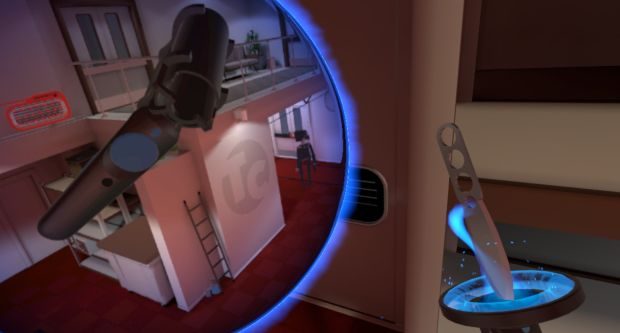 A stealth and knife-throwing game about defeating your corporate robo-masters. Over the years, your office has been slowly laying off all its human employees, replacing them with lovable Portal-esque androids. As the last human on payroll, you must get to the bottom of this. I took on this mission with all the seriousness it deserved, by picking up a broomstick early in the demo and clinging to it it everywhere I went.

Unfortunately, my fumbling hands are not used to VR controls and I ended up stumbling around, flailing the broom at all my quiet robot colleagues, like some drunk janitor. I placed a clipboard and a nameplate atop a secretary bot’s head and asked it to stay very still as I took a swing at the objects, envisioning a moment of William Tell accuracy and triumph. The result was imperfect and the secretary bot soon lay sprawled on the floor. Shortly afterwards, I was murdered by a robot with a revolver.

Verdict: I deserved to be fired.

A blissful holiday from dread reality. This demo sent me to a beach with the purpose of being far from any work, and I imagined this as a kind of unpaid leave from the office I’d just been ejected from in Budget Cuts. Imagine my shock when there were also robots on the beach. But Owlchemy’s bots are happy TV-faced droids with friendly smiles and can-do attitudes. When you wave at them, they speak.

I warped about the beach, splashing in the water with inflatables and building lacklustre sandcastles. But what’s this? Underneath a sapphire blue cascade of water hides a little hermit crab. I spent the remainder of my holiday ignoring the pleas of attention from the bots and instead buying toy seashells from a vending machine as gifts for my new best friend the hermit crab. Then the robots had a party and the crab started dancing. I was very very happy in this world and deeply yearn to return there. 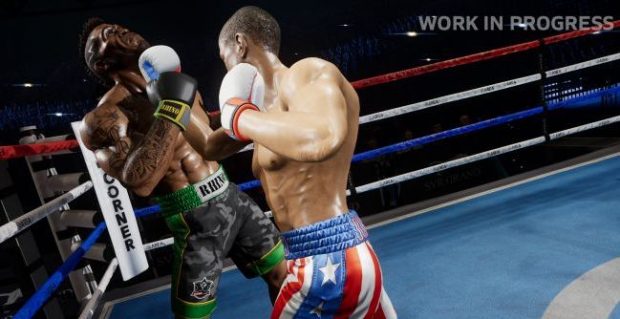 A deeply physical arm-swinging VR fighting game from the makers of Raw Data. I am writing this appraisal two days after having boxed a giant man in the face multiple times, and my back and shoulders are still aching. I couldn’t bring myself to muck around in this one because the developers demo-ing it were very determined that I should become a real boxer, with arms and everything, and they gave me precise instructions so that I would not let them down by eg trying to lick my opponent. So I just concentrated on landing blows on his left temple.

He was a hulking powerhouse with more abs than teeth. It was surprisingly difficult. This isn’t a light spot of shadow boxing. You have to throw fists fast and hard for them to “land”. When I came out of the game, puffing and wide-eyed, the organisers gave me a sweat rag and looked at me with the serious concern of a mother.

Oh no, more exercise. Here they strapped motion detectors to my shins and told me everything was going to be OK. I put on special shoes too, because I was directed to do so by a man with an authoritative voice. Inside this sporty demo, the only visible part of my body was from the knees down, and this made me feel like a leggy ghost. Then the footballs came. They popped out of some cannons, leisurely bounding towards my spectre feet. I did as I was instructed and kicked them at the highlighted mini-goals. 30% of my kicks were accurate. “Amazing!” I thought. “Just like my real feet.” 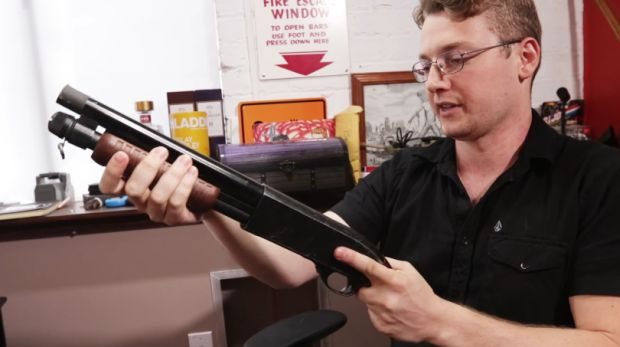 An impressive physics-heavy firing range from the Hover Junkers folks. I couldn't get an in-game screenshot, so here's one I found depicting one of the developers with a shotgun, which fits the mood. This was really more of a tech demo showing off some of the features for their upcoming shooter Hall of the Machine King. I was confronted with a shooting range, where I sampled several of the world’s finest firearms. I inspected a 9mm pistol so closely that my handheld controller tapped against my headset in the real world, a fragile reminder of the horrible meatspace waiting to embrace me once all this was over. I shot some guns, giddily, and discovered the ability to slow down time.

At this juncture it felt only right to watch the shells as they erupted out of my submachine gun, Matrix-style, popping out and flying softly away in time with the slowed “whomp whomp whomp” of the firing mechanism. I tried to eat the floating bullet cases by catching them in my mouth. It didn’t work. My mouth is not in the game, and the bullet cases are not real.

VR is as impressive as it has been for a while. Between the possibility of becoming a slow motion action hero, a wine-sipping museum visitor, or a sun-bathing holiday-maker, I liked the museum and its Strangethink-like galleries the best of all. But the old doubts remain. The Vive Pro will yet again be an expensive piece of kit at $799. A headset for only the most enthusiastic enthusiasts, and not for the likes of non-committal hobbyists such as I. 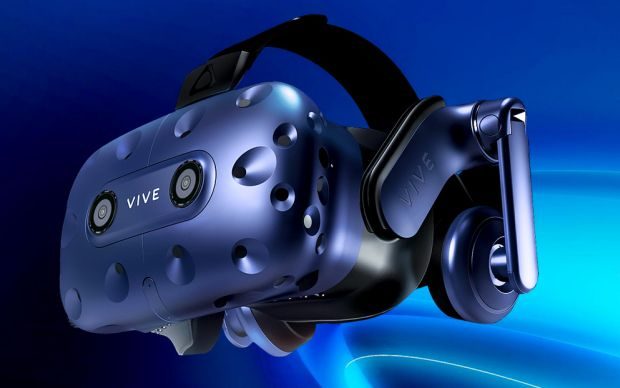 There is also still that out-of-body VR sickness you get from moving around in-game while your body remains stationary. That didn’t affect me in the games that used a “warping” technique to move around, like Budget Cuts or Vacation Simulator. But others (like a sci-fi shooter I didn’t write about because I forgot to take notes on it) stuck dogmatically to letting you wander around in an old-fashioned "twin stick" first-person shooter way – a vomit-inviting prospect. I’ll put my eye problem down to being an infrequent user of VR headsets suddenly exposed to two hours of wildly different virtual tours, but even still, VR this good still seems to me a niche for those wealthy enough to afford it and healthy enough not to feel unwell while using it. A pity, because these strange lands are exciting to explore, even if it’s just for 20 minutes.