My love for building stuff in The Sims 4 continues. I saw today that, in the space of about a month, my custom content folder has hit a gigabyte in size. Whoops. But this is all in service to a greater goal, which is building nice houses. After I showed everyone my tiny desert concrete block, Alice0 said she would like a house with more ferns and moss, and in Scotland. So I have built her a house. It took a long time. Eventually I will build everyone on the team a house.

Incidentally, the Tiny Build Off between Graham and me is still on the cards. Last week it was my birthday and this is what he sent me: 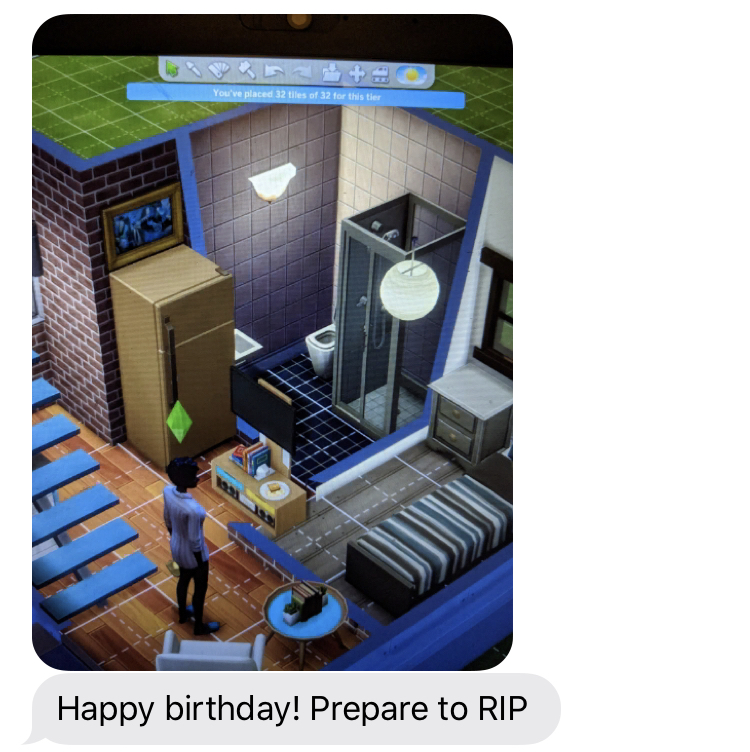 I'm taking this to HR. Anyway, in order to facilitate building Alice0 a ferny gloom house with high ceilings and low light, I used The Sims 4: Vampires, because that had a lot of the plants and foliage I wanted. I got very frustrated when doing this build that there wasn't enough dank European foliage to be had, even in custom content. Fortunately, the CC recommended by Alice L and the VidBud community filled in a lot of gaps. 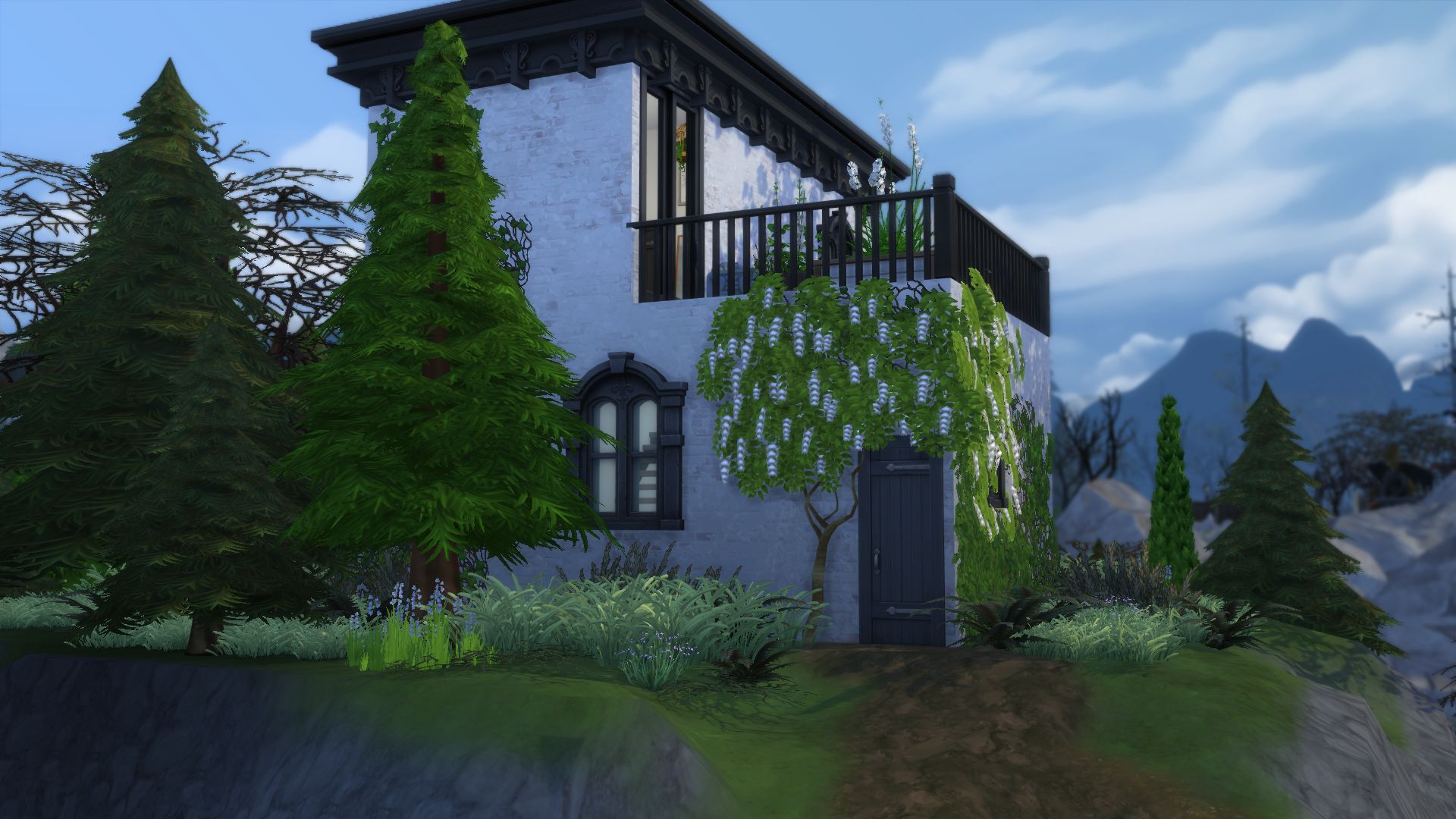 Alice0's house is on top of a hill, so it has commanding views of the mountainous countryside. Figuring out the landscaping took me fucking ages, especially clipping the rocks together at the bottom, but most especially making a slope that sims could walk up without getting stuck. The building itself is a renovated old plaster cottage with black woodwork, and and a wood-slat roof. 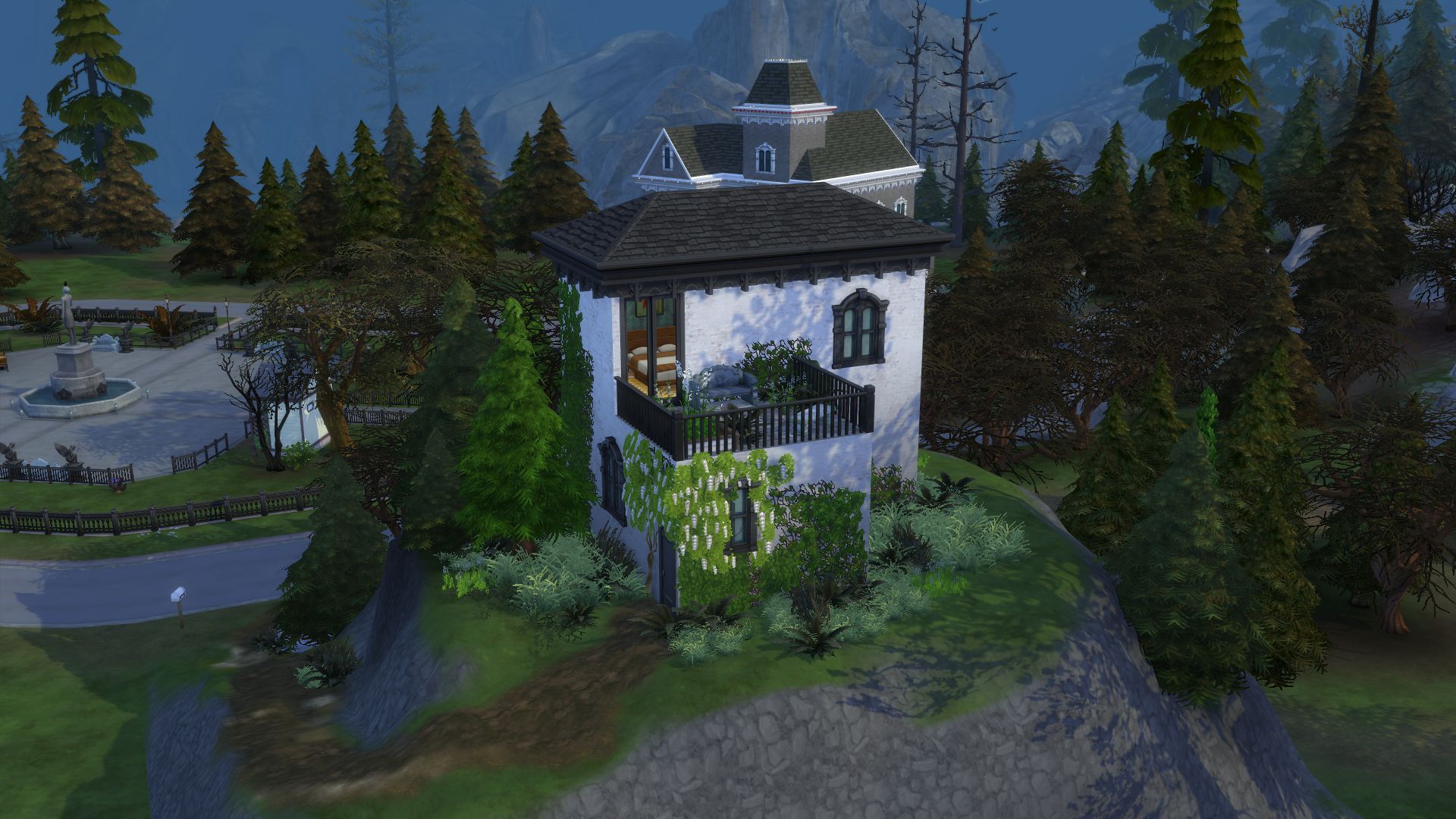 It is impressively ivy'd, and surrounded by trees, including evergreen pines. This means it feels secluded, despite having close neighbours! (It is quite frightening how easy it is to slide into low-rent estate agent patter).

The front door opens into a short hallway, with enough room for a coatrack, that leads to the living area. 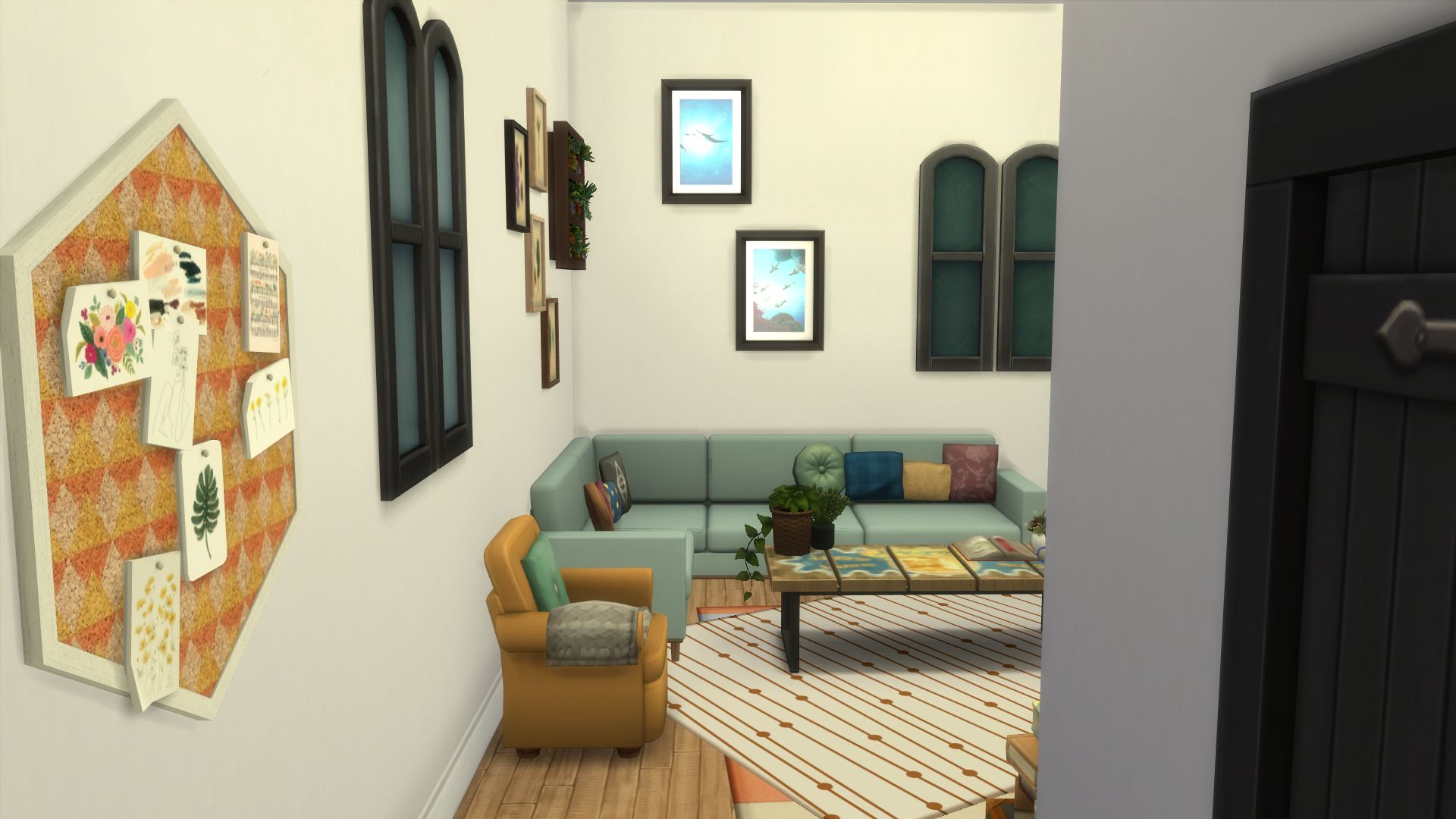 Opposite the entrance is a small room that's been re-purposed as an office. Despite the bold dark walls, the space feels cosy and professional rather than cramped (it does because I'm telling you it does, alright?). 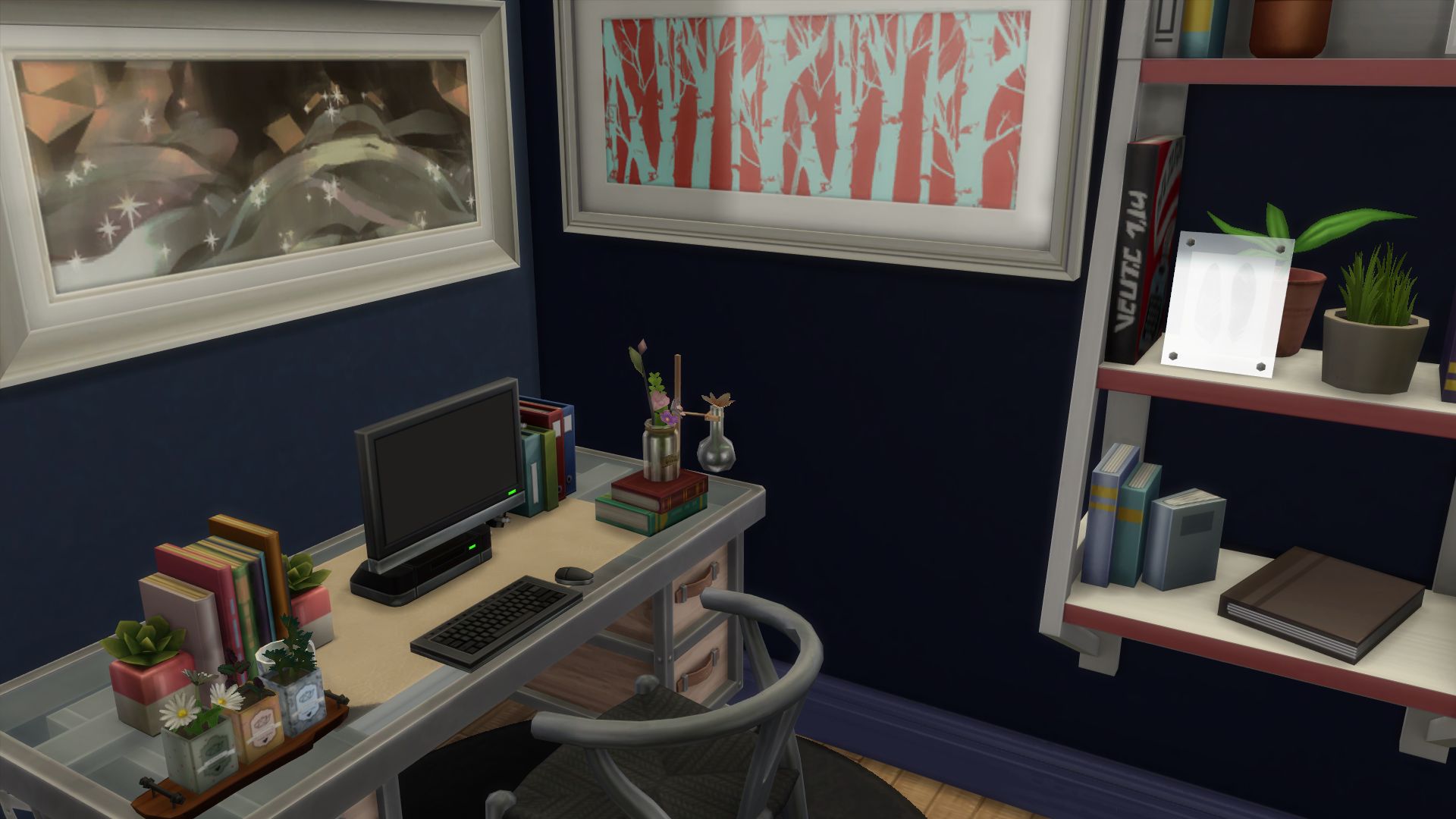 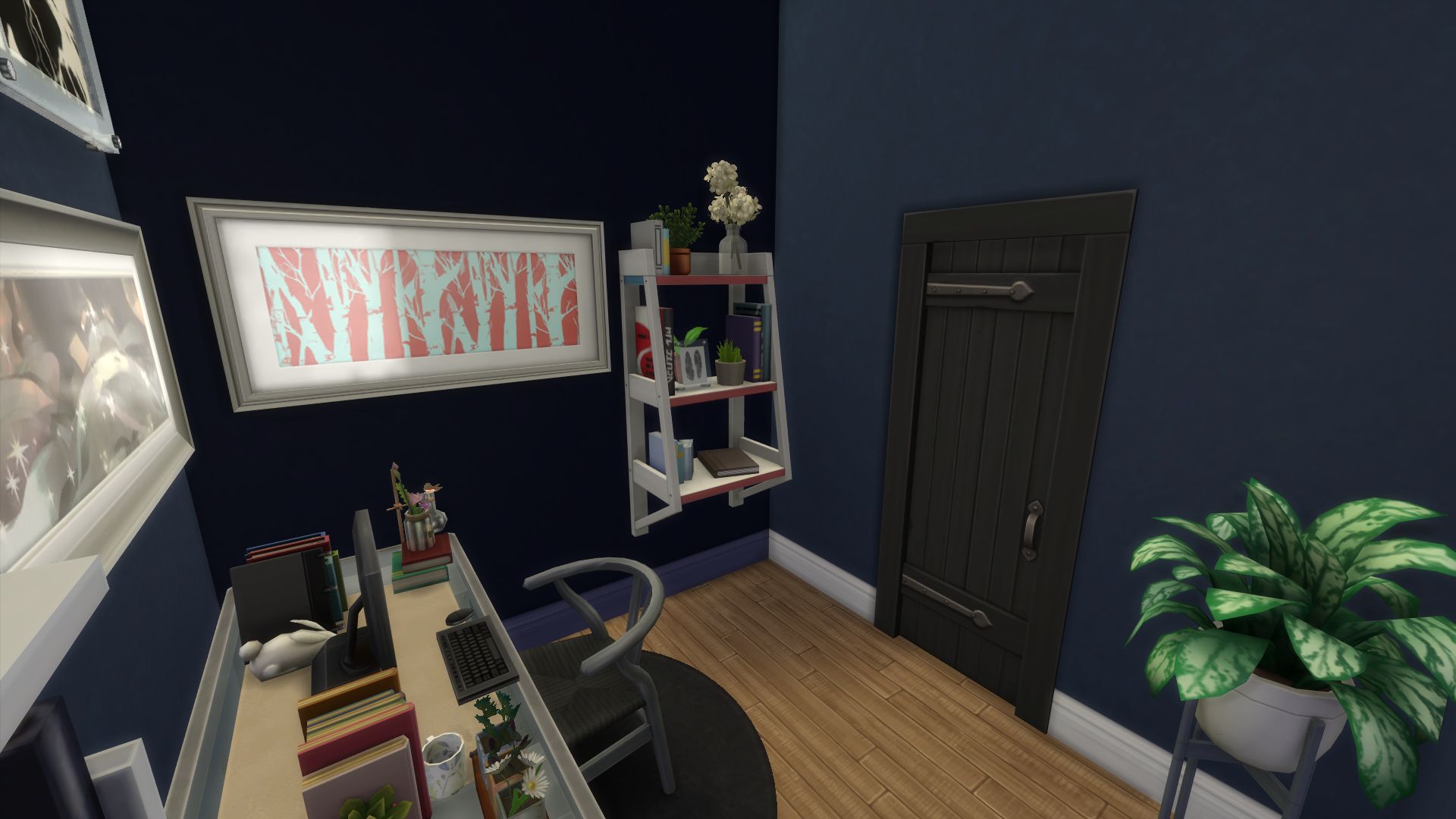 The combined kitchen and living area is modern but still homely, with a lot of room for plants and other little comforts. And, importantly, the high walls mean there's lots of space to hang art. 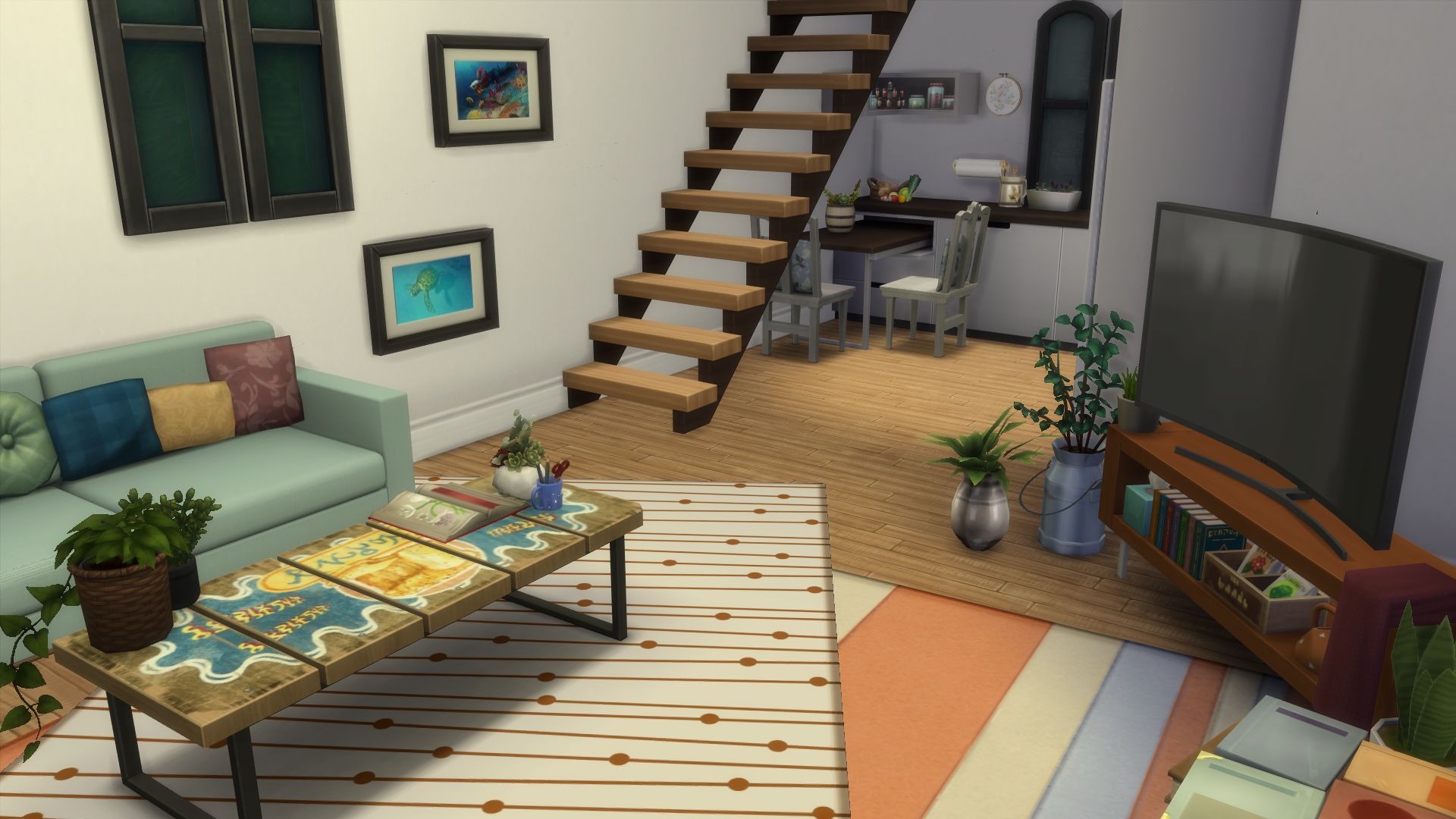 The kitchen itself is small but well formed, leaving more space for the comfy living area. You can see jars there, for some no doubt delicious preserves, and bread from the local independent bakery! 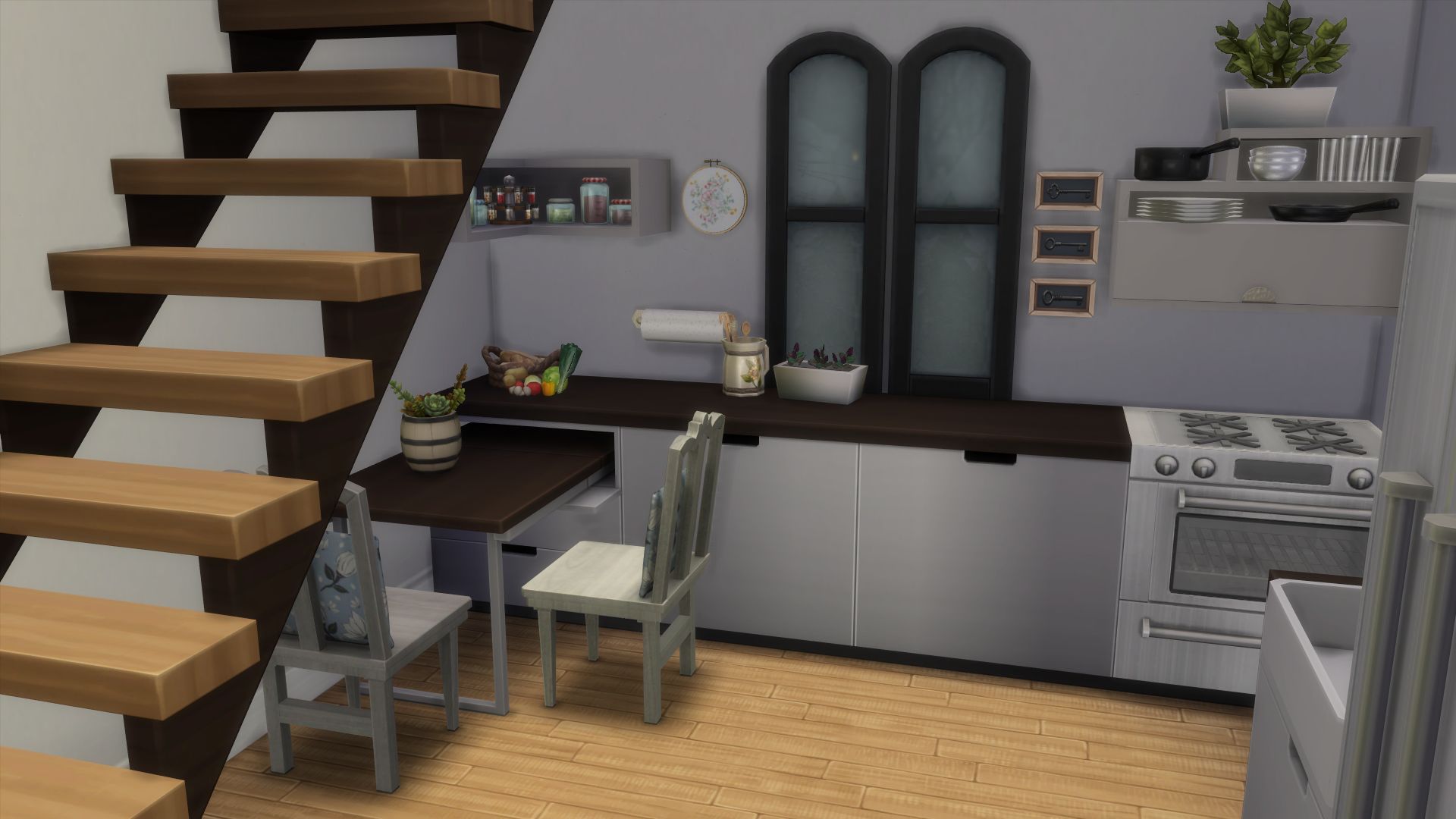 Upstairs there's room for a small but weirdly shaped bathroom, wrapped around by an honestly pretty oppressive corridor. I'm not going to do show photos of those because I am not so pleased with them. But the bedroom is pretty great! 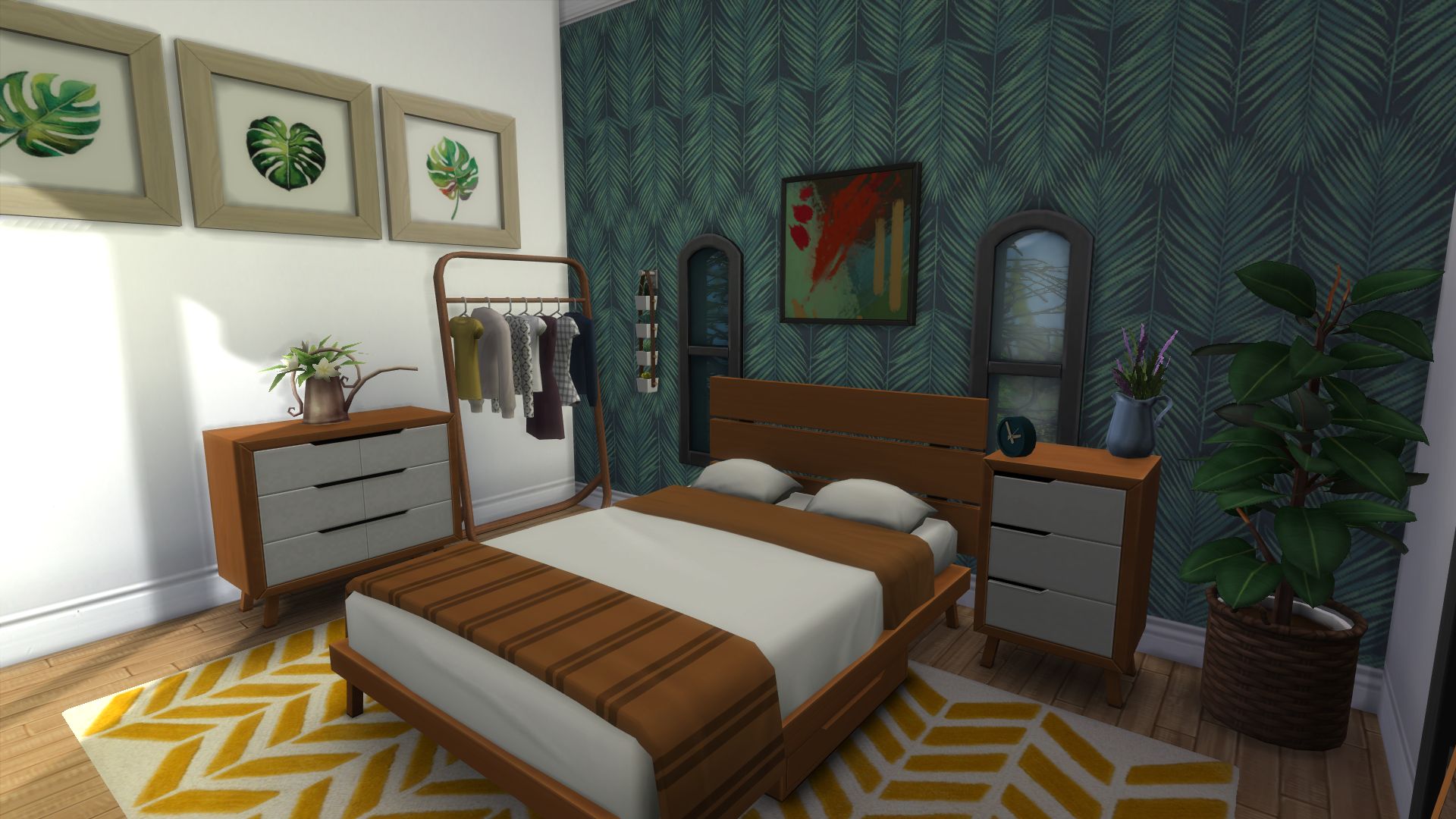 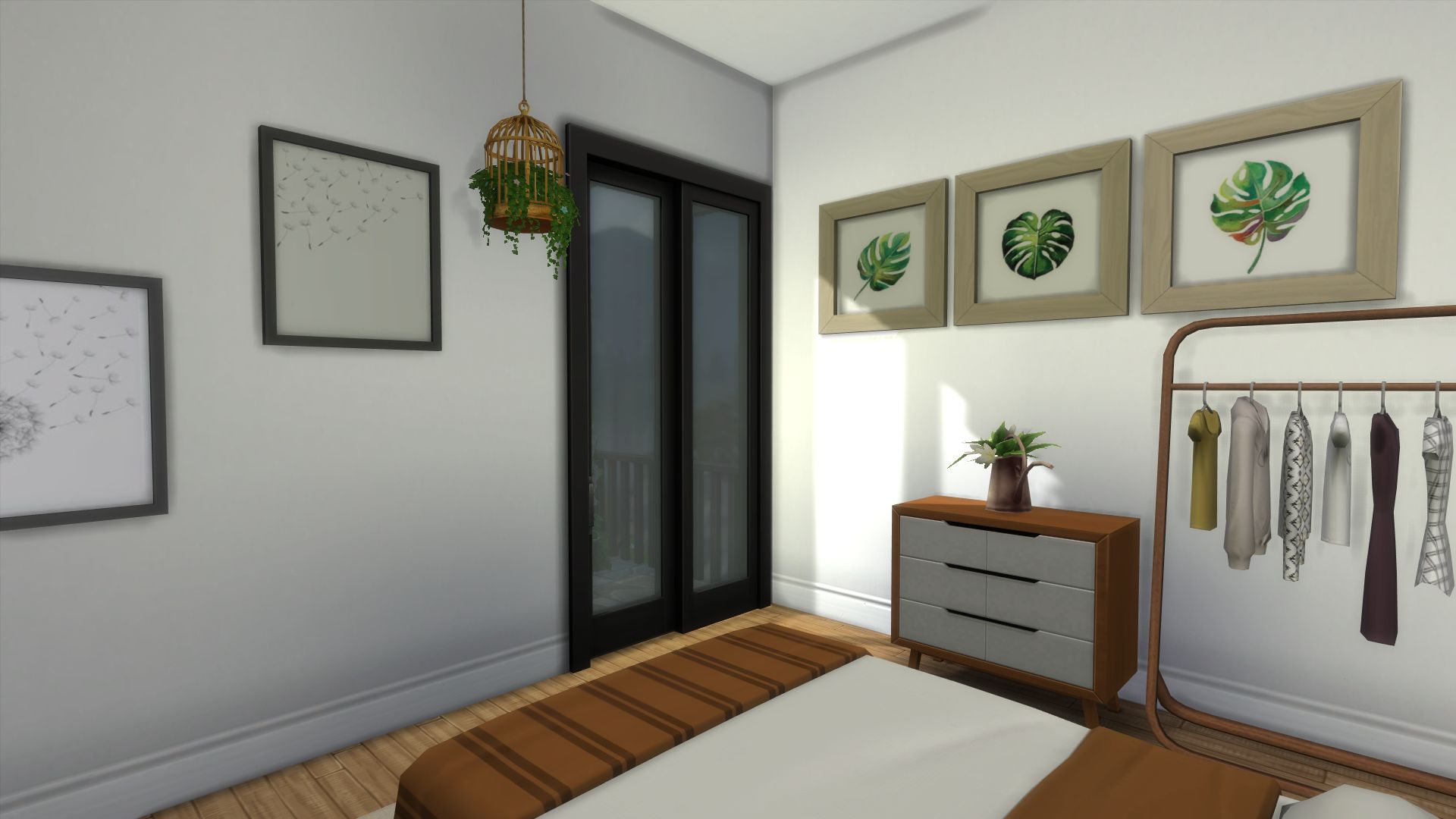 The new sliding doors there open out onto what I consider the pièce de résistance of the Alice0 home - a terrace, with appropriate furniture. There are some flowerbeds, but they're flourishing with wildflowers, and ferns, thistles and flowers have been left to grow naturally in the mud and cracks of the stonework. 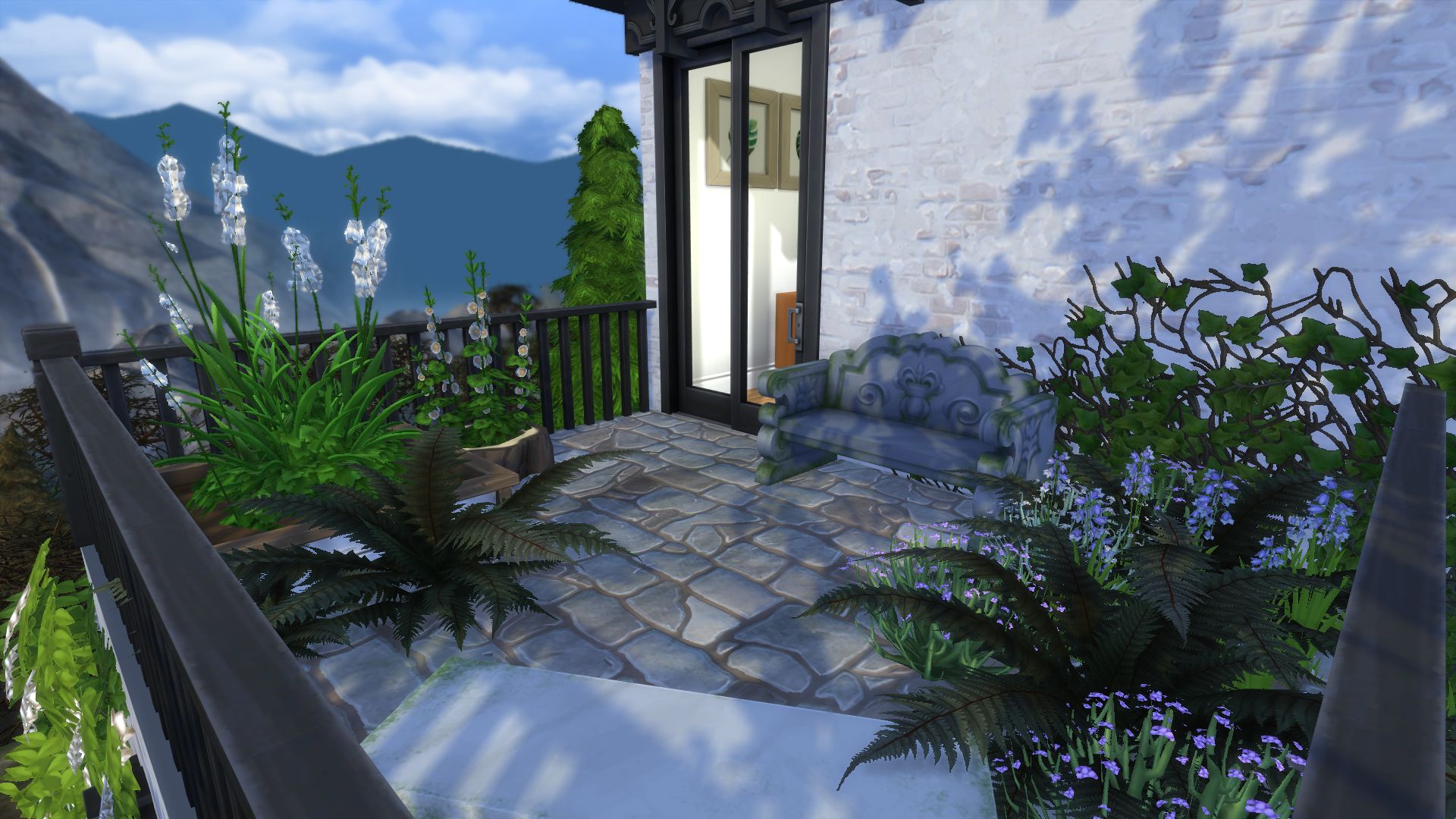 And check out those views! They were an accident and I didn't realise they existed when I started building, but still. 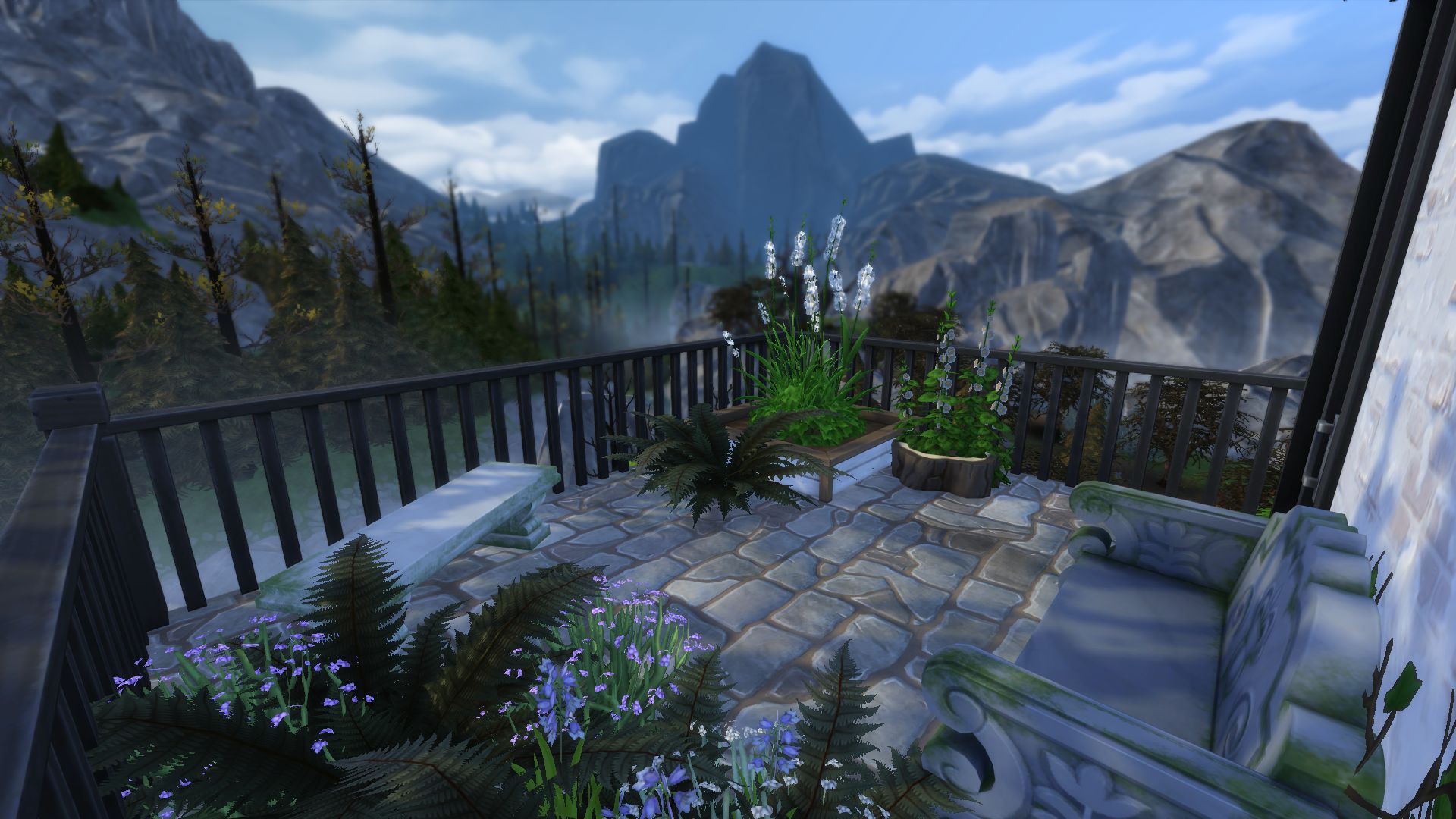 Overall I am pretty proud of this latest build, although a glitch has occurred that prevents the test sim in the house from going back downstairs. She is slowly starving to death in the bathroom; pls ignore. Here is the full footprint, if you're interested. 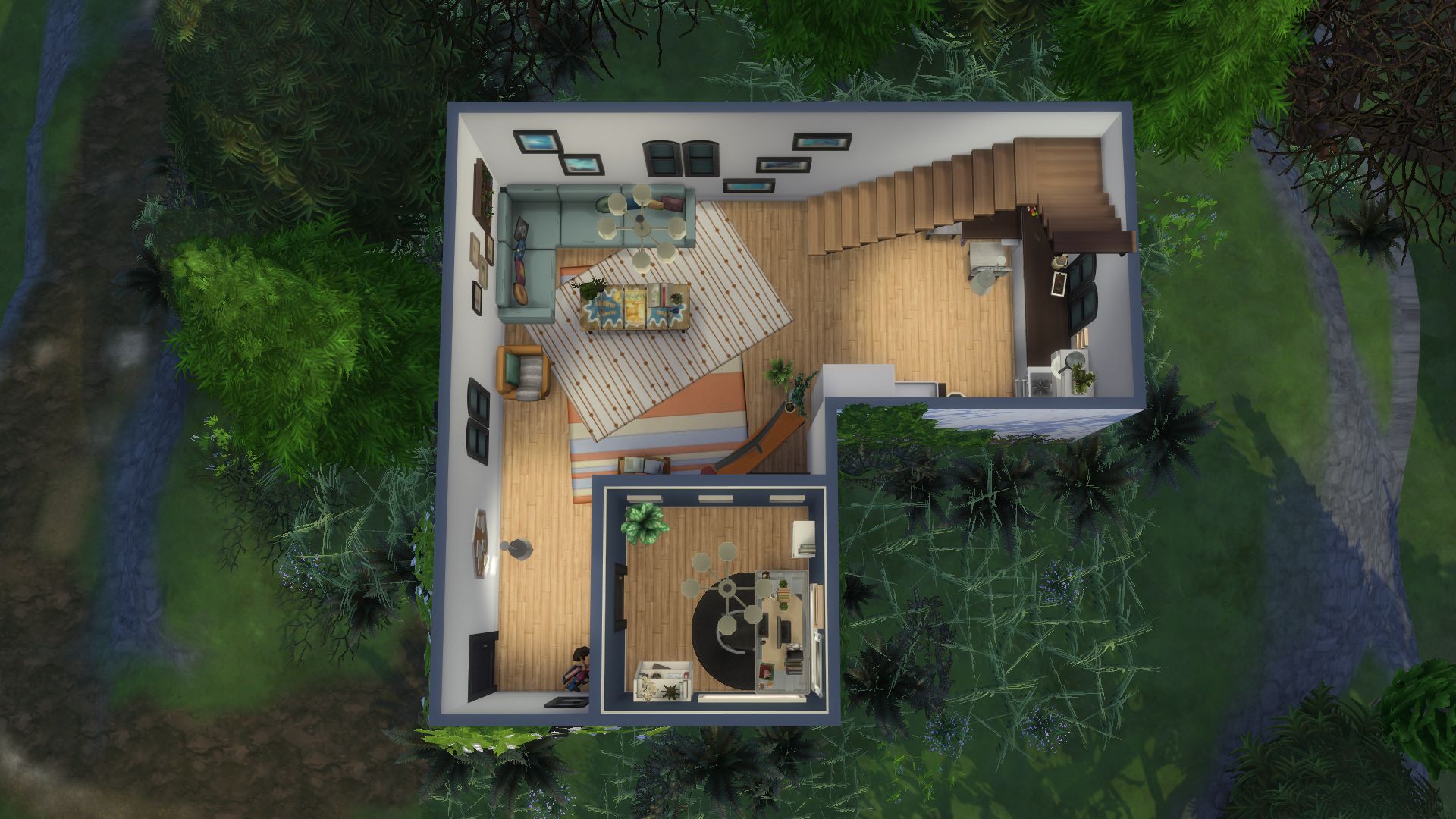 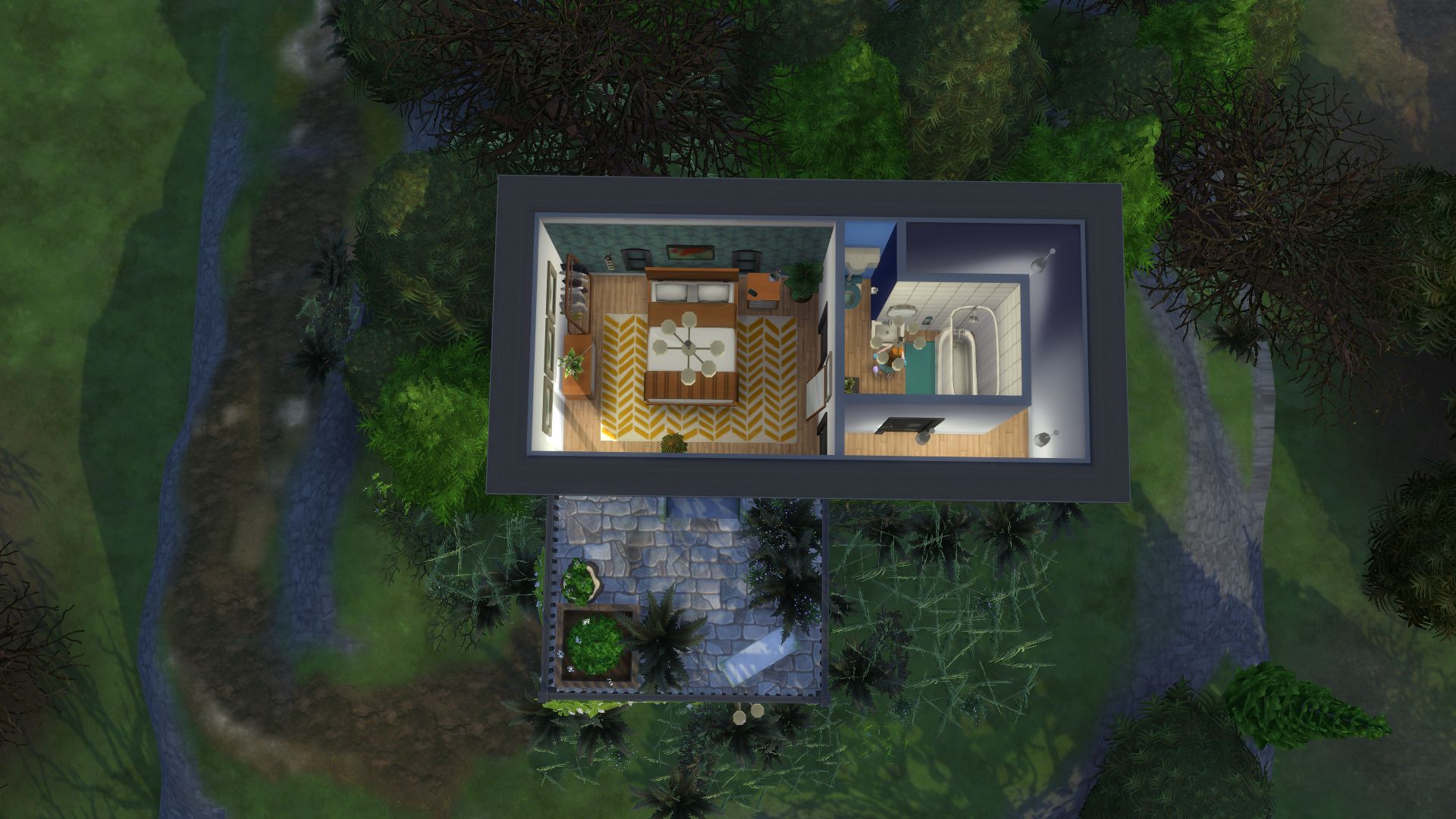 My plan is to make a house for everyone, without consulting them, and then get them to say how well I have designed it. Hopefully this will push me out of my current interior design boxes. I am using a lot of feature walls and that sort of thing, which is a pretty basic bitch move tbh.

Alice0's verdict: I've given my landlord notice and intend to move in ASAP. I will be telecommuting from inside The Sims 4 so you'll need to communicate with me via Origin chat messages. Or I'll just sit here imagining sitting on that bench on a summer's afternoon.