Red Dead Redemption 2 may be a good Animal Crossing substitute for people suffering from AC-FOMO at the moment, but I'd argue that the best PC stand-in for Nintendo's cozy life sim is Adamgryu's A Short Hike, which you can currently get on the cheap as part of Itch's stupidly good value Bundle for Racial Justice and Equality.

Indeed, it made the long wait until Animal Crossing: New Horizons that bit shorter when I gorged myself on it over the Christmas holidays last year, and I often find myself returning to it even now. Despite being infinitely smaller in stature than Animal Crossing, my frequent dips into this cosy island jaunt became a bit like opening a tin of Cadbury Heroes, promising myself I'd have just the one and then an hour later finding the entire box had mysteriously disappeared in a puff of plastic wrappers. I just couldn't get enough of it. So if you, too, are feeling hungry for some Animal Crossing, why not ease that growling stomach with a little Short Hike. I promise it will do wonders for your digestive system.

Aside from the obvious similarities between the two games (there's fishing, digging, everyone you meet is a gosh-darn cute anthropomorphic animal), A Short Hike is a game about discovery and making connections. You start with a clear objective - protagonist Claire is expecting a phone call from her mum, but there's no phone reception on the island except right at the top on Hawk's Peak. Solution? Hike up the mountain. Easy, I thought. I'll be done with this by dinner time. 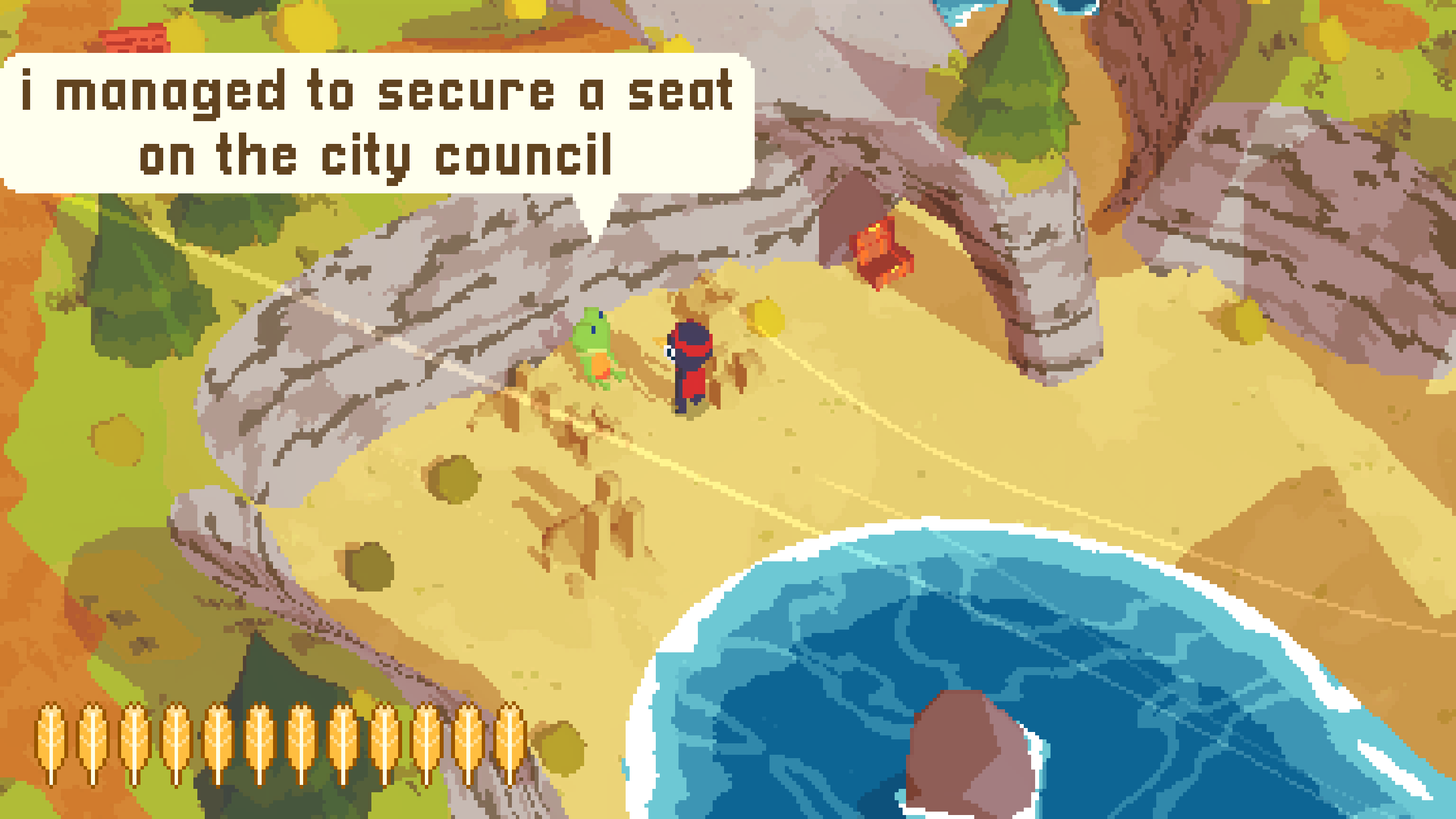 But the world of A Short Hike just kept unfurling, growing larger and larger with every tiny scurry of Claire's little bird feet. Every time I thought I'd seen everything there was to see on the island, I'd go and discover another little patch round the corner, leading me to rainy graveyards, sunny beaches and old (almost) abandoned shipyards. You can probably jog the width of it in a couple of minutes as the crow flies, but when you're making those first, tentative forays out into the unknown, it feels like this ever-rolling cylinder of an island could go on forever. It's a surprisingly large play space for such a short game, putting even the nooks (sorry) and crannies (sorry again) of my New Horizons island to shame.

And gosh, the music, the music of A Short Hike could have been plucked straight out of New Horizons, too. If I didn't know any better, I'd say Mark Sparling's jaunty guitars, tinkling pianos and breezy accordion tracks had been left on the cutting room floor when it came to filling out the soundtrack for Animal Crossing's Switch entry, so similar are they in tone, coziness and general good vibes. Beach Buds, for example, sounds like the perfect 11am tune, while Somewhere in the Woods has a perfect midnight 'till 1am feel about it.

I was so enamoured with A Short Hike's soundtrack, in fact, that I went and bought it straight away after finally tearing myself away from it - and I wish I was able to do the same for my favourite Animal Crossing games. Yes, the K.K. Slider Chrome extension is probably the best I can hope for in this regard, but that's no good when I want those same feel-good tunes out and about.

Plus, everyone you meet is so darn nice. Even the grumpy kid with the monopoly on all the remaining golden feathers you need to buy so you've got enough strength to reach the top of the mountain. They're all as charming as any Animal Crossing neighbour, and heck, I wish some of them were my Animal Crossing neighbours. I want to cheer on Sue the running rabbit and Taylor the racing turtle. I want to write notes of adoration to the stubborn guy at the climbing club. I want to see the turtle on the beach fulfil her dream of getting elected mayor. And man alive do I want to find out if the bird chap who buys your fish is either a friend / relative of Gulliver the amnesiac sailor bird from Animal Crossing.

It is, in short, a lovely place to spend time in, which is precisely why I've spent so many hundreds of hours milling around my various Animal Crossing towns over the years, too. I like each game's easy-going approach to life's problems, how everyone's always cheering everyone on and got something to smile about (even the grumpy ones), and I love that feeling you get when you stumble across a new crack in the ground or a new treasure chest at the top of a strange tower, or you spy a new, fishy silhouette swishing about in the water. A Short Hike may not be designed to eat up as much of your time as Animal Crossing, but from my experience it's definitely the closest a PC game's ever come to capturing its sense of spirit and overall loveliness.

So go and grab it as part of Itch's Bundle for Racial Justice and Equality, because I promise you won't regret it. The bundle itself only costs $5 (or just over £4 if you're buying from the UK) and contains over 1400 games and tabletop RPGs. At time of writing, it's raised close to $5 million, with the proceeds being split between NAACP Legal Defense Fund and the Community Bail Fund in support of those in the United States protesting systemic police brutality against Black people. It's available until next Tuesday, June 16th, so get it while you can.