At its very best, two player co-op game A Way Out explores a counterintuitive truth: that conflict is a necessary step towards good teamwork. It’s a prison break game about two men, Vincent and Leo, incarcerated in an American prison. Vincent is a cool-headed strategist who solves problems using his words rather than his fists, while Leo is a young hothead who would rather strike first and ask questions later.

The most remarkable thing about this second game from Josef Fares, writer/director of Brothers: A Tale of Two Sons, is how it encourages both participants to roleplay as those strong personalities. Vincent and Leo are set in stone; unlike in games such as Telltale's The Walking Dead, you cannot affect their character through in-game choices. You and another player surrender to the narrative, while the game aims to involve you through action rather than intent. It’s a game that sacrifices freedom for character work. Here's wot I think.

A library of two games isn't enough to establish artistic intent, but Fares is clearly fascinated with duos and the interplay between their halves.

In Brothers, he cast a single player in the role of two brothers, one older and one younger, and mapped each brother to a different controller thumbstick. The player needed to complete two tasks in synchronization, one with each hand, to accomplish a single goal. The older brother (left hand) pulled a lever, for example, while the younger brother (right hand) turned a crank, which would then lower a bridge. Because a single brain controlled both brothers, any meaningful debate over what to do was conducted internally, in the player's mind.

A Way Out requires two players. Though it's possible to play online - one can purchase a single copy of the game and share a free Friends Pass with a long-distance buddy - it's a game best played via "couch co-op," in the same living room. And after completing it with my wife (the two of us took approximately eight hours to finish it), I wouldn't recommend playing it without your co-player by your side, should you have the option. Couch co-op makes the decision process as messy, personal and fraught as possible. And it also makes the resulting teamwork that much more gratifying. The greater the effort, the sweeter the reward.

As the two prisoners, you and another player progress through a series of mini-tasks, from bypassing metal detectors to crawling inside hollowed-out walls to sneaking past absent-minded security guards. The prison serves as a tutorial for a wide variety of co-op tasks. The most basic is the classic 'two-man ledge boost,' where one guy climbs on the other to get to the high ground, and then pulls his buddy up behind him.

But of course, it gets more complex than that. In one scenario, Vincent and Leo are recuperating in the same prison hospital room, and Vincent must distract the nurse while Leo creeps out of bed, retrieves an object, and returns to bed. At one point in this scenario, Vincent has to knock on the wall behind his bed to distract a guard, so that Leo can sneak past.

These mini-tasks are sometimes clunky in their implementation. Take sneaking around for instance; it's often cumbersome, and at times, you're overly "sticky" to the barriers you hide behind. When you're struggling to get out of cover as a security guard heads towards you, it breaks the immersion. Though to be fair, there’s nothing in the game challenging enough to require more precision.

The weakest sequence of the game is an extended action set piece where Vincent and Leo get their hands on weapons, and the game devolves into a numbing gun fight against 30-40 bad guys. Vincent provides cover, while Leo runs around the enemy to flank him. And repeat. And repeat.

At its worst, the game tries to be too many things - a driving game, a stealth game, a shooting game, a racing game - and ties your success to how well you navigate a series of underdeveloped control schemes, rather than how well you work with your partner. 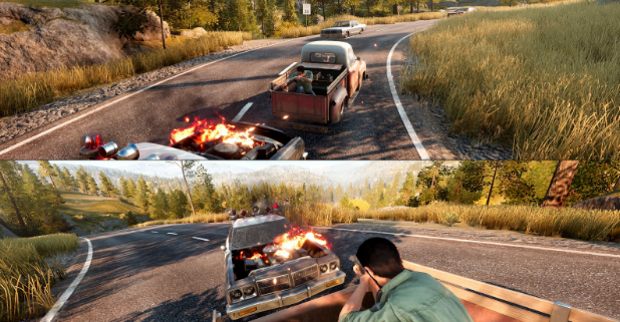 The good parts of A Way Out -and there are more good parts than bad -come down to timed, simple button pressing and situational awareness. These are the times when Fares trusts his innovative co-op concept to stand on its own, without piling different genre archetypes on top of it.

In one memorable sequence, both men sabotage their cells without the guards noticing. They take turns. For example, Vincent keeps watch for the wandering guards and Leo starts scraping the wall. If the guard starts down the corridor, Vincent can distract him for a few seconds while Leo hides the evidence.

Control-wise, all Vincent has to do is move the right thumbstick to look down both ends of the hallway. All Leo has to do is tap square to scrape the wall. But this basic sequence is far more entertaining than the protracted, overwrought 40-man gun fight, because it explores the nature of teamwork in a simple, elegant manner without fussing over cover mechanics and knowing when to reload. 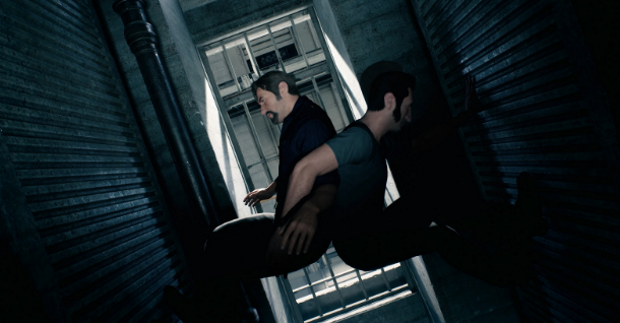 And the co-op dynamic affects the interchanges between the characters as well as the stealth and action sequences. Fares forces player-to-player arguments in a handful of scenarios, where you accomplish a goal using either Vincent's way or Leo's way. For example, Vincent and Leo must cross a bridge that's swarming with police. Vincent wants to sneak under the bridge, but Leo wants to steal a police car and ram his way over the bridge. The choice is yours, but you must both agree on a single course of action for the story to move forward. During these instances, my wife and I would debate the merits of our choices, face-to-face, while the characters debated the choice in-game. 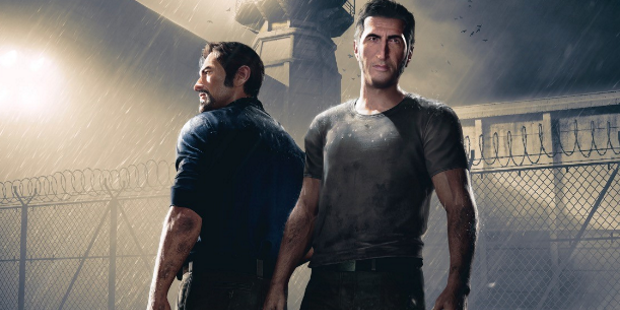 And it's this unique mirroring - this counterintuitive 'life imitating art' - that is A Way Out's finest innovation. At first, my wife and I discussed the scenarios apart from the characters' motivation. Which option would be the most logical course? Which tactic would have the highest rate of success? These were discussions of objective practicality rather than emotion.

But the deeper we delved into the game, the less we were debating as Barbara and Kevin, and the more we were debating as Vincent and Leo. We had identified with our characters, and we were advocating for their respective views and wants. Usually, in the course of gameplay, a game's character becomes an avatar for you. But A Way Out accomplishes something far more subversive and bold. Eventually, for better or for worse, you become an avatar for your character.