Abomination: The Nemesis Project could never be mistaken for a good game. Hothouse Creations’ 1999 real-time X-Com-like was plagued by wonky, unresponsive AI, poor controls, opaque and unclear campaign progression and a vast slew of bugs. The UK retail box described and showed major scenes that never appear in the game, so add ‘deceitful’ alongside ‘busted’ to the list of Abomination’s sins.

Broken, perhaps, but a fascinating game. It holds a special place in my heart, even if I’ll never shake the enthusiastically repeated combat bark of “It’s Freak-Splittin’ Time!” from memory.

Perhaps it was the ever-so-90s ‘X-Men Battle Lovecraftian Horrors’ story, with your starting recruits each having a defining superpower? Maybe it was the brooding ambient & industrial soundtrack? I’m sure part of it was the horrifically beautiful way the UI itself broke down, then grew increasingly infested with biomechanical awfulness as the campaign dragged on. 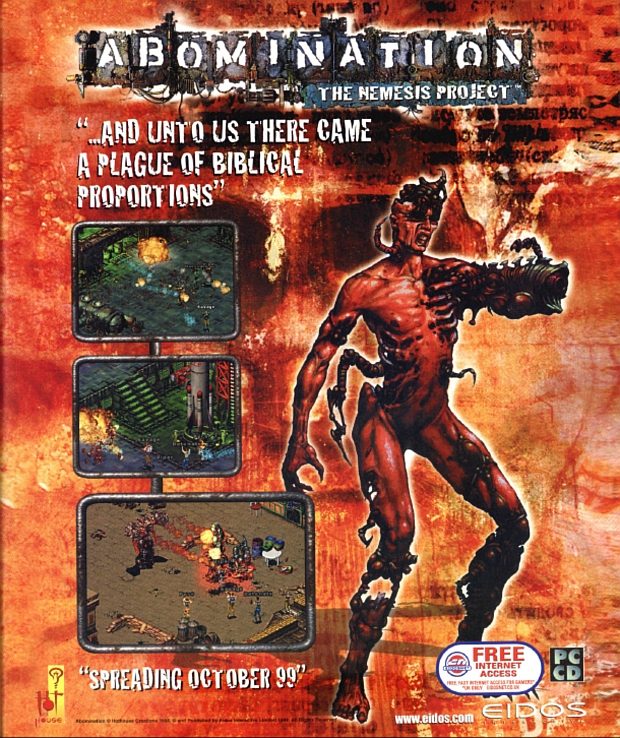 Entropy was a core part of the atmosphere. Early phases of the game had you assisting local police & military forces against cultists, but as the city died, so did human resistance, replaced by biomechanical monsters and towering flesh-ziggurats lined with twitching bodies. Against all odds, it sold the comicbook body-horror aesthetic.

Abomination was busted, but it deserves a chance to get it right, and more fame than a lone YouTube Let’s Play. Maybe Firaxis are looking to revive another strategy franchise?

RPS is out of office today. We asked our friends to write short posts like the one above on subjects of their choosing. Read them all here.