AMD have announced the first batch of processors in their upcoming Ryzen 4000 family of desktop CPUs today, but you're going to have to wait a while before they're available to buy as standalone chips. Instead, the six APUs making up AMD's Ryzen 4000 G-series (the ones with built-in Radeon graphics, in case you've forgotten) will only be available in pre-built PCs initially, with a full launch for enthusiast buyers to take place at a later date.

Alas, AMD weren't able to provide an exact date for when these APUs would be available to buy separately so existing users can slot them into AMD's existing 400 and 500-series motherboards, but with APUs ranging all the way from entry-level Ryzen 3 chips right up to powerful Ryzen 7s, the Ryzen 4000 G-Series is definitely worth keeping an eye on if you're a budget PC builder.

First things first, despite these APUs bearing the Ryzen 4000 name, the six G-series chips announced today are still based on AMD's existing Zen 2 CPU architecture and 7nm manufacturing process, just like the rest of their Ryzen 3000 family. They're not the next-gen Zen 3-based Ryzen 4000 CPUs that are meant to be coming out before the end of the year.

That said, these are still the first G-Series chips to be made with Zen 2, and the improvements they make on AMD's existing Ryzen 3000 G-Series chips (which are still technically 2nd Gen APUs based on AMD's 12nm manufacturing process) sound pretty substantial, with AMD claiming up to 2.5x more performance compared to the previous generation.

It's also the first time AMD's made a Ryzen G-Series APU with eight cores. Previously, the most powerful G-Series chip was the Ryzen 5 3400G, which topped out at four cores - even when the rest of AMD's Ryzen 5 3000 chips all had six of them. This time, however, AMD have introduced a new tier of octa-core Ryzen 7 G-Series chips, which, when combined with their onboard Radeon Graphics, should make them pretty formidable. Indeed, AMD claim that the Ryzen 7 4700G should be able to replace the need for an entry-level graphics card if you're on a really tight budget, and you can see a little bit more about their claimed gaming performance below.

Before that, though, let's take a look at the specs for each Ryzen 4000 G-Series chip:

As you can see, there are three, super energy-efficient 35W models and three, beefier 65W models in AMD's Ryzen 4000 G-Series family, and it's the latter group that will be most appealing for budget PC builders. Compared to AMD's previous G-Series chips, the Ryzen 5 4600G offers a 21% improvement on single core performance over the Ryzen 5 3400G, according to AMD's benchmark figures, and a 94% increase in multicore performance. The Ryzen 7 4700G, on the other hand, is 25% and 152% faster respectively compared to the 3400G, thanks to those four extra cores.

In terms of how they stack up against their Intel competition, AMD said they expect roughly level single core performance and substantially faster multi-core speeds compared to Intel's 9th Gen Coffee Lake chips, as the ongoing stock shortages of Intel's new 10th Gen Comet Lake CPUs means that AMD have apparently still been unable to do more up to date testing than this. Still, their results put the Ryzen 3 4300G just 4% behind the Core i5-9500 in their internal Cinebench multi-core test, while the Ryzen 5 4600G's multi-core performance is actually a couple of per cent ahead of the Core i7-9700. The Ryzen 7 4700G, meanwhile, is streets ahead of the Core i7-9700 on multi-core, but until I get a chance to test them properly against Intel's newer, 10th Gen CPUs, none of these performance figures really give us the full picture.

The same goes for AMD's gaming performance figures, too. According to AMD, the Ryzen 7 4700G will be able to play games at 1920x1080 without the need for a dedicated graphics card, but frame rates will naturally vary according to the game. "What we're looking at here is playable games, we're talking 30-40fps+, sometimes into the 70s and 80s - this is at 1080p Low," said AMD's director of technical marketing Robert Hallock during their press briefing, which is apparently 2-3x faster than the 10fps you'll get with Intel's onboard graphics around - although again, their figures were based on the Core i7-9700, not their newer 10th Gen chips. 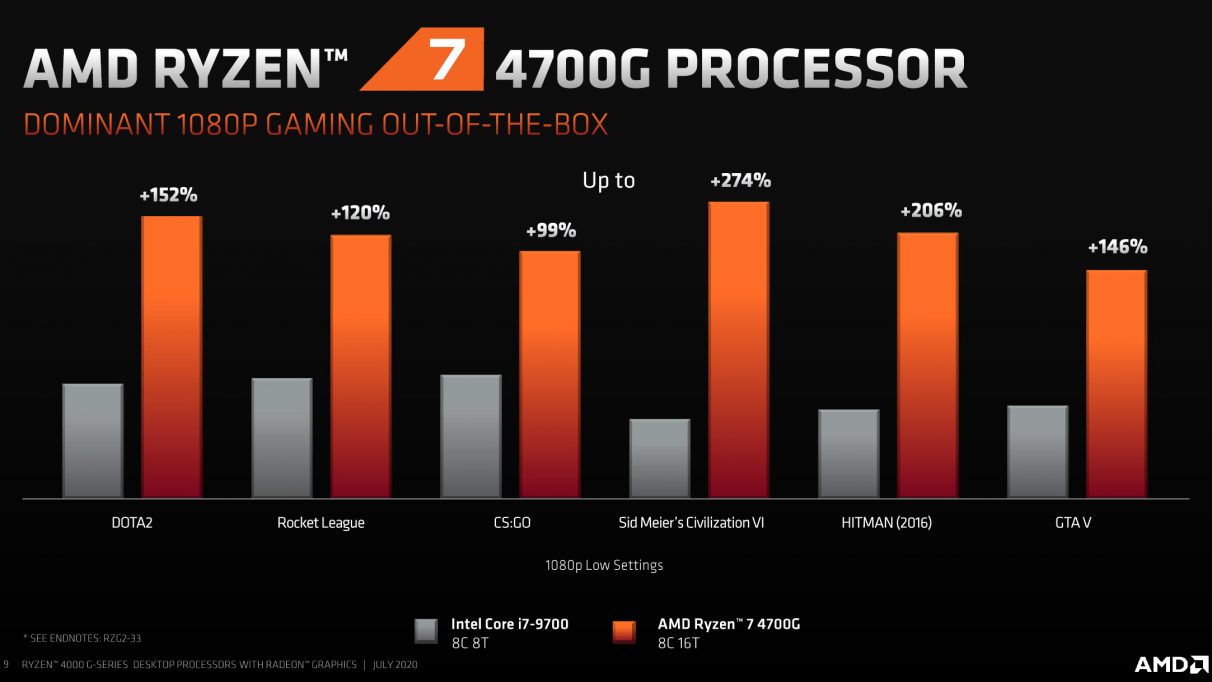 As for the Ryzen 5 4600G, this will also offer a "playable" gaming experience on 1080p Low in the same games listed above compared to the allegedly "unplayable" experience on an Core i5-9500, AMD said, but they didn't mention any specific frame rate figures.

Still, while "playable on Low at 1080p" might not sound massively impressive to those of us used to playing games with dedicated graphics cards, that's still an intriguing prospect for any one looking to buy (and eventually build) a small media PC or a tiny barebones systems. Plus, given that the last G-Series APU I looked at, the Ryzen 5 2400G, was able to hit playable frame rates in games such as Doom (2016), Skyrim and Wolfenstein on High at 1080p, I'd imagine that the Ryzen 4000 G-Series chips will be able to do a lot more than what AMD talked about in their presentation. Still, we won't know for sure until review systems are available, so watch this space.