After years of playing catch-up to their Intel rivals, AMD have definitely come out swinging with the launch of their new Ryzen 3000 CPUs. Their high-end Ryzen 7 3700X, for example, made a pretty good impression when I reviewed it a couple of weeks ago, and as an overall value for money play is probably well worth considering over Intel's Core i7-9700K, even if its gaming performance isn't quite up to the same level. Now, AMD hope to repeat the trick with the Ryzen 5 3600X, their top mid-range gaming CPU that has its sights set squarely on Intel's Core i5-9600K. Does AMD's new 7nm processor have what it takes to be the new mid-range champ in our best gaming CPU line-up? Here's wot I think.

On paper, it doesn't look like much has changed since its 2nd Gen predecessor, the Ryzen 5 2600X. After all, the Ryzen 5 3600X is still a six-core, twelve thread CPU with a 95W thermal design point (or TDP), and it even comes with the same AMD Wraith Spire cooler in the box. It's had a little clock speed bump of 200MHz, taking its base speed to a nippy 3.8GHz and its max boost clock up to 4.4GHz, but otherwise they're both pretty similar.

In practice, however, the Ryzen 5 3600X couldn't be more different. Jumping from a 12nm (nanometer) manufacturing process to a 7nm one for AMD's 3rd Gen Ryzen chips has hugely benefited the 3600X here, giving both its gaming chops and general desktop performance a sizeable shot in the arm over its 2nd Gen predecessor, and even gives its 2nd Gen Ryzen 7 2700 / 2700X cousins a run for their money as well - so much so, in fact, that I wouldn't even recommend buying either of those 2nd Gen Ryzen 7 chips any more, as the 3600X offers a lot more for almost exactly the same amount of money. 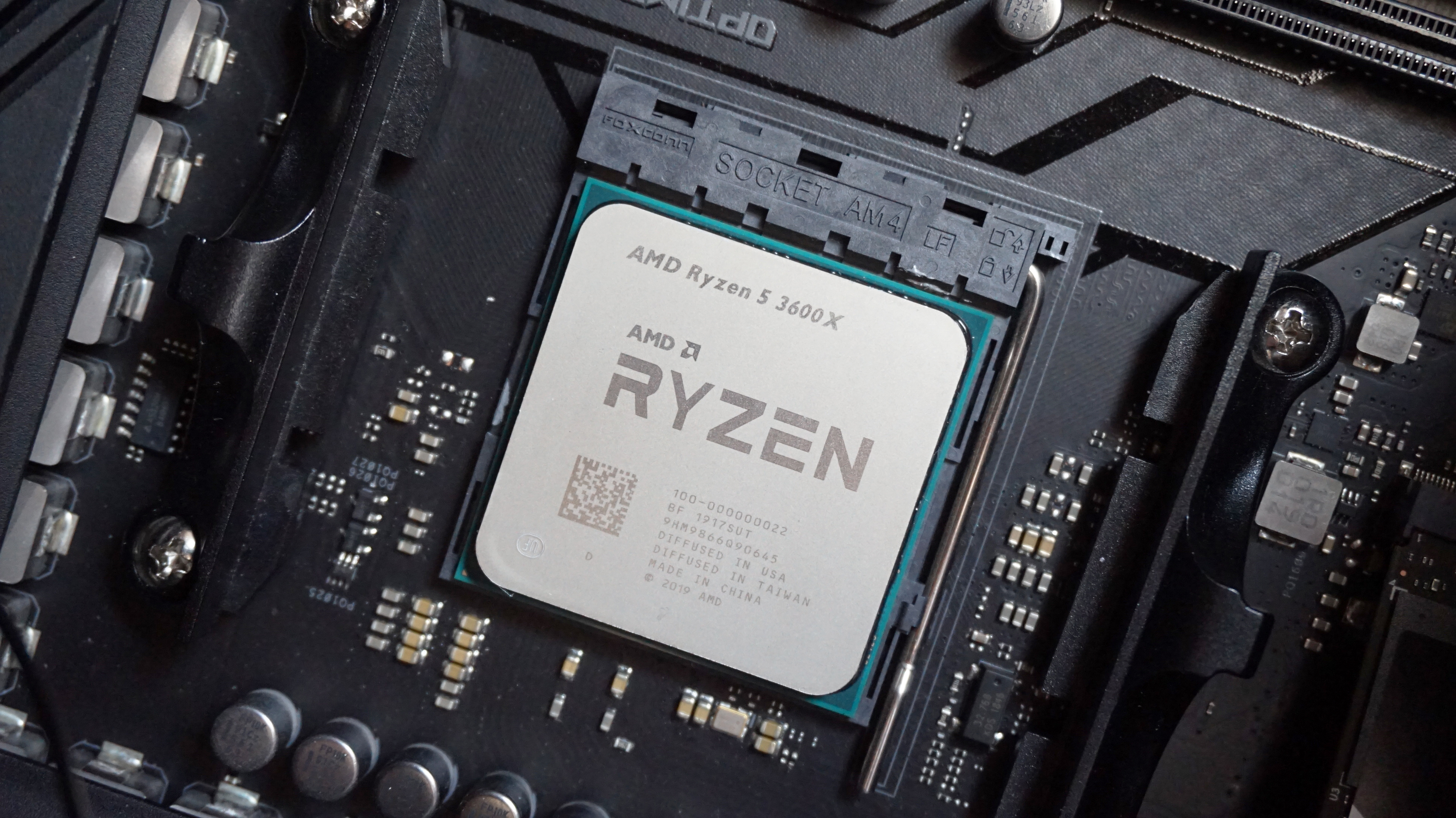 As I've noted in all of my other gaming CPU reviews recently, though, getting an accurate picture of a CPU's gaming chops is still a somewhat difficult exercise. As our friends at Digital Foundry have explained in the past, a lot of PC benchmarks either don't test your CPU properly, or simply aren't very accurate in the first place.

Fortunately, a handful of gaming benchmarks have got a lot better at this recently, with the likes of Shadow of the Tomb Raider, Forza Horizon 4, Assassin’s Creed Odyssey and more all providing an in-depth look at your CPU's performance as well as what your graphics card's doing. That said, there are also several other factors that can impact gaming performance, such as your graphics card, the type of RAM you've got, and even what type of storage you've installed the game on. As a result, getting a truly accurate picture of a CPU's gaming performance is tricky, but I've done the best I can with the equipment available to me.

Now, eagle-eyed readers will notice a couple of big-ish changes to my testing setup this time round, namely that I've tested the Ryzen 5 3600X on a different X570 motherboard compared to the Ryzen 7 3700X and Ryzen 9 3900X, and I've used a different cooler. That's because the Ryzen 5 3600X arrived separately to my initial Ryzen testing pack, and I've since had to send all that stuff back to AMD.

I'm confident my results should still be pretty comparable, however, as my motherboard benchmarking results show the Asus Crosshair Hero VIII is pretty much on par with the Gigabyte X570 Aorus Master (reviews coming soon). I'm also not too bothered about having a different cooler, as I suspect the vast majority of people will use the one that comes with the Ryzen 5 3600X in the box (the Wraith Spire I've used here), rather than spend even more money hunting down the higher-end Wraith Prism that comes with the 3700X and 3900X. 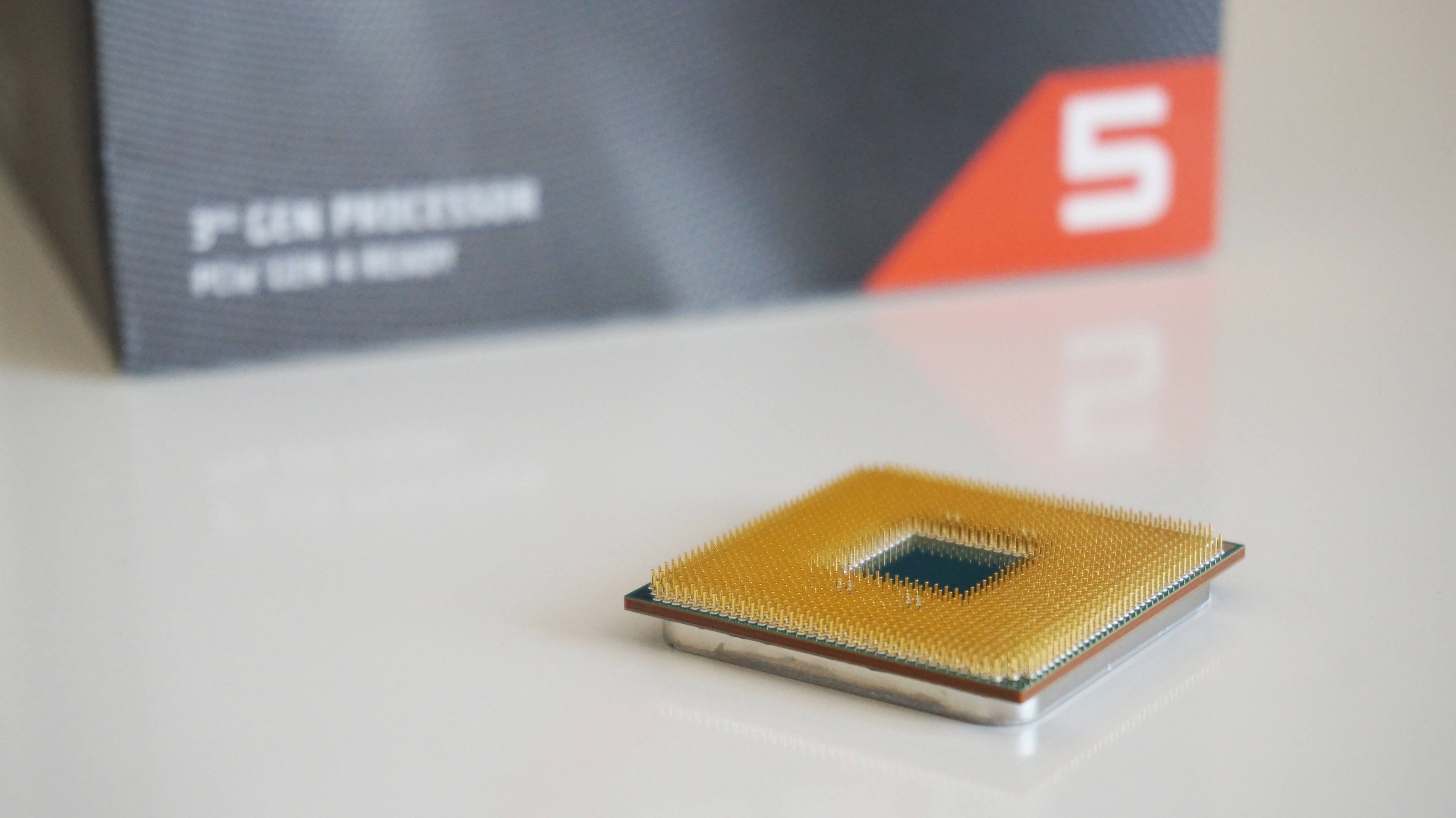 Taking a look at said results, then, the light purple Core i5-9600K still has a clear lead over the dark red Ryzen 5 3600X in everything except the Ryzen-friendly Assassin's Creed Odyssey when it comes to playing games at 1920x1080. Admittedly, it's harder to say whether you'll see exactly the same kind of performance gap on a more mid-range-level graphics card - the kind you're more likely to be pairing with a CPU like this, such as Nvidia's RTX 2060 or AMD's Radeon RX 5700, for example - but if I'm being honest, I'm not sure my eyes are really good enough to notice the difference between, say, 113fps and 104fps. Some people will (or think they will), and if that's the case, then by all means snap up the Core i5-9600K.

However, when we shift up to 2560x1440, the gap becomes a lot narrower - even with an RTX 2080 Ti at my disposal. At this resolution, the Ryzen 5 3600X is pretty much neck and neck with its Intel rival, and even gives Intel's Core i7-8700 a run for its money, too. Here, the Ryzen 5 3600X becomes a lot more compelling than the i5-9600K, even if it's a smidge more expensive than i5 for those buying in the UK. That said, it's also worth pointing out that whereas the Ryzen 5 3600X comes with its own pretty decent cooler bundled in the box, the Core i5-9600K does not, so it's likely to end up as the more expensive CPU by the time you've factored in the cost of a cooler. 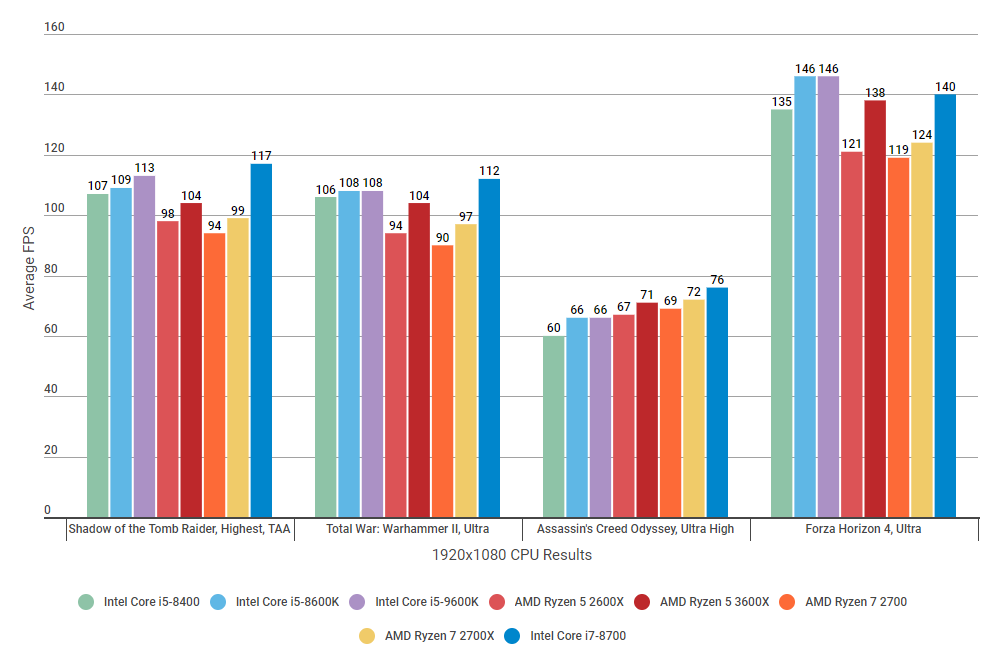 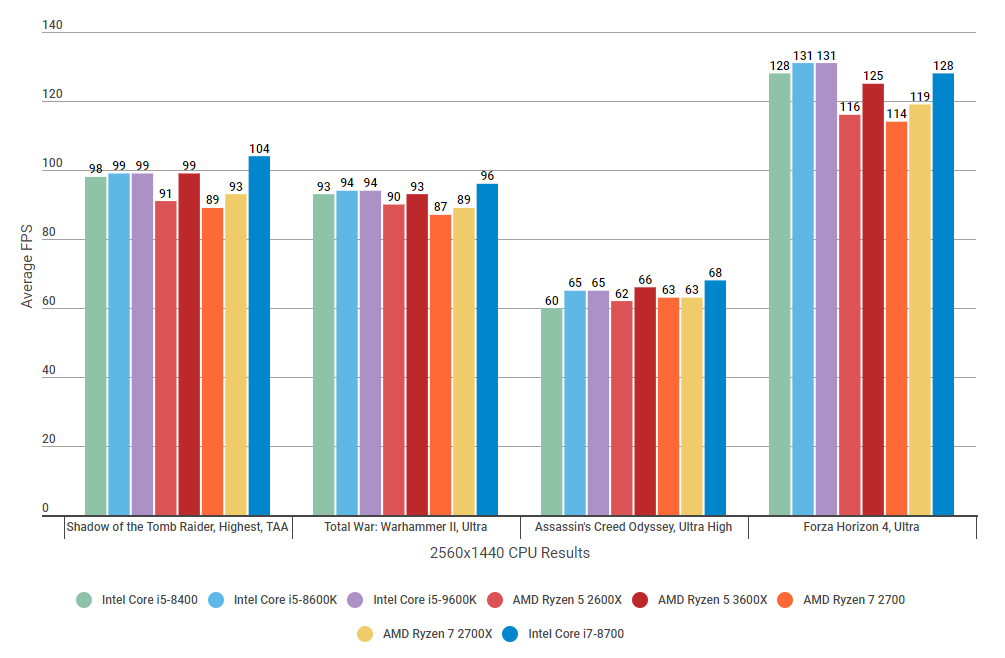 The Ryzen 5 3600X also makes a very strong case for itself over in the general desktop department, too. Again, as I've stated in previous CPU reviews, I'm not really that bothered about how good a CPU is for creative applications and the like. My PC is for gaming and gaming alone, and my top priority is finding something that will give me the fastest frame rates, not the fastest rendering times for programs I don’t own or will ever use.

And yet, when I put it through Cinebench R20's single core test, the Ryzen 5 3600X put in a surprisingly decent showing compared to the i5-9600K, offering a 10% increase over the i5's stock, out of the box speed, and falling just 6% behind compared to its overclocked speed. For the record, I didn't tinker with the Ryzen 5 3600X's overclocking settings, for despite being unlocked just like its Intel rival, it would also have disabled some of the clever things going on under the hood of the 3600X, such as its SenseMI gubbins, Precision Boost 2 tech and XFR (or Extended Frequency Range). 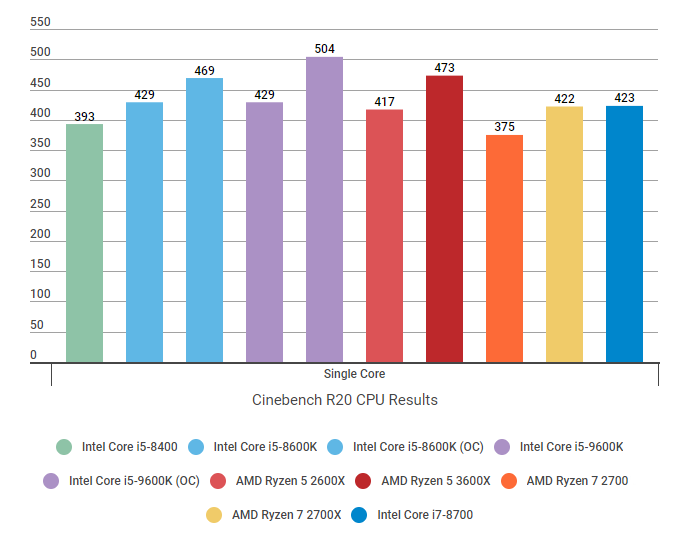 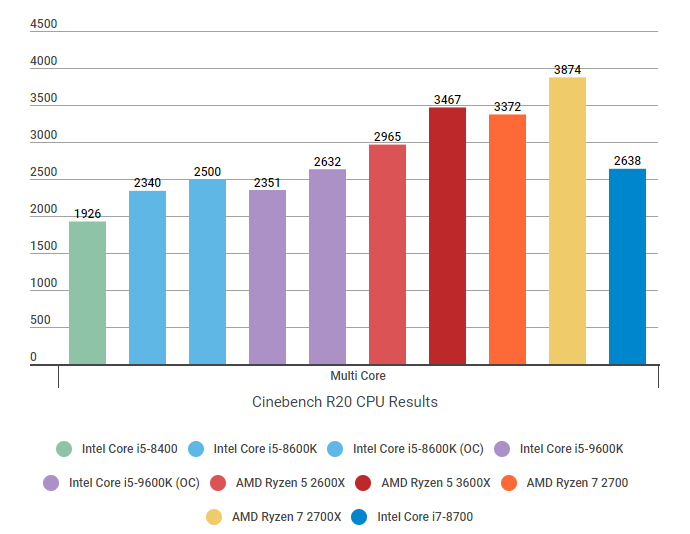 As for its multicore performance, well, AMD have always been miles ahead of Intel in this respect, and the Ryzen 5 3600X is no different. Not only does it sail past the Core i5-9600K's Cinebench score, but it's even nippier than the Ryzen 7 2700, which is pretty darn impressive.

All in all, then, yeah, I reckon the Ryzen 5 3600X stands up pretty well against Intel's Core i5-9600K, and is probably the gaming CPU you should buy in this particular price range if you'd rather not have the hassle of buying an extra cooler and want to save a bit of cash in the process. Plus, you get a free three month subscription to Xbox Game Pass for PC with it, too, making it even better value overall. I'd probably still recommend the Core i5-9600K if you want the absolute bestest best gaming speeds around in the mid-range CPU category, particularly if you're playing games at 1080p, but for 1440p gamers and above, the Ryzen 5 3600X is a tough act to beat.