If a big reveal of two new Big Navi GPUs wasn't enough this evening, AMD also announced the world's first 16-core gaming CPU in the form of the Ryzen 9 3950X. The monstrous gaming CPU is now the top dog of AMD's Ryzen 3000 series, sitting above the previously-announced Ryzen 9 3900X, which made its debut back at Computex a couple of weeks ago. The bad news? This 16-core, 32-thread beast is almost twice as expensive, costing a whopping $749 as opposed to $499.

The rest of AMD's Ryzen 3000 family, on the other hand, are all due to arrive on July 7 - just as AMD outlined during their big Ryzen 3000 reveal back at Computex. Can't remember what's coming? Here's a quick recap of the five Ryzen 3000 CPUs that will be arriving next month:

Admittedly, there weren't many new details to report with regards to AMD's upcoming Ryzen chips this evening, but they did show a rather amusing streaming demonstration that put Intel's Coffee Lake top dog, the Core i9-9900K, to shame. Demonstrating what kind of advantages their 12-core Ryzen 9 3900X brings to the table, AMD put both chips through The Division 2's benchmark and showed what kind of performance you'd see as a viewer on YouTube if a streamer was broadcasting using OBS's Slow quality preset at a resolution of 1080p at 10,000 Kbps CBR.

The results were pretty astonishing, to say the least. Whereas the Ryzen 9 3900X managed a very smooth 59fps, Intel's chip crawled along at a disastrous 1.6fps. Previously, both CPUs had managed a steady 90fps average at 1440p without being streamed, but throw those extra processes into the mix and AMD's chip outperformed Intel's by a clear country mile. 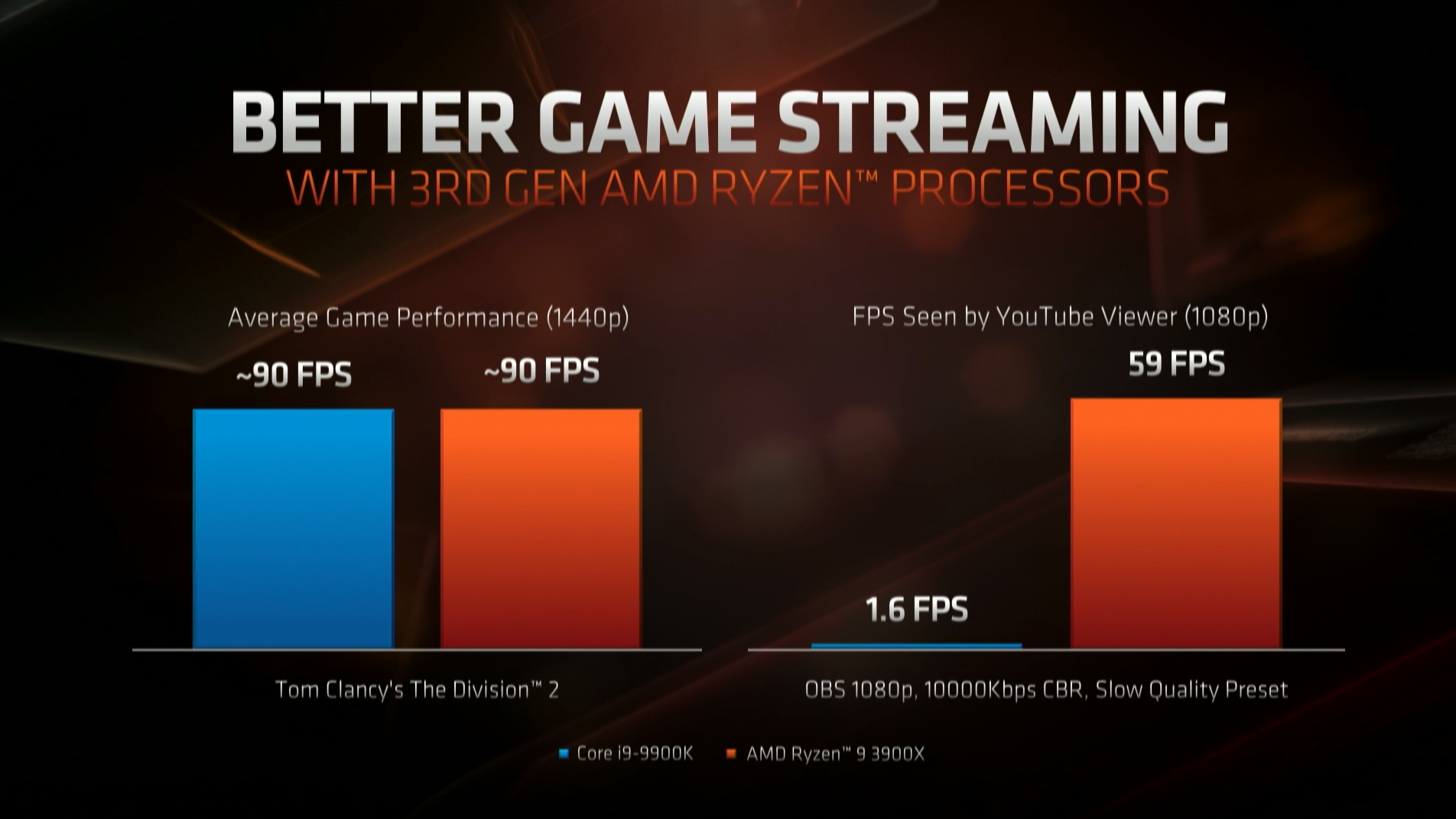 Elsewhere, however, there was much less to shout about. With benchmark results across a spread of games, both processors were pretty much neck and neck across the board, as you can see from the image below. AMD had the edge in CS:GO, and a very tiny lead in Call of Duty Blops III and Plunkbat, but otherwise it was Intel who was just about sneaking in front when it came to 1080p gaming performance. 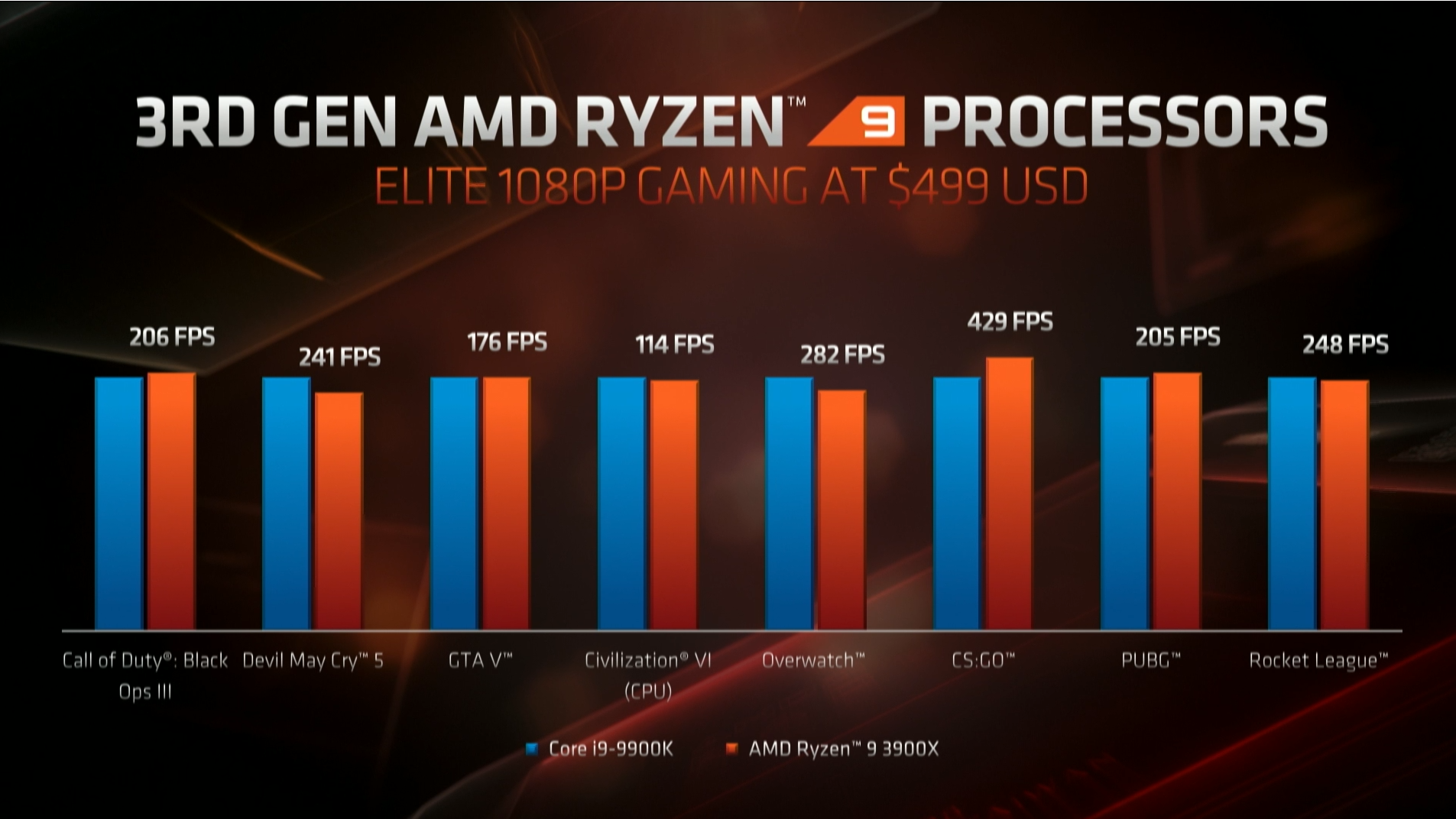 In fact, things looked even worse for AMD's top-end Ryzen 7 CPU, the Ryzen 7 3800X. Here, Intel's Core i7-9700K had a much clearer lead over its AMD competitor, and to be honest I'm not really sure why AMD showed this graph at all. Sure, the Ryzen had the edge in Blops III again, but its Plunkbat lead was much smaller this time round, and it lost its CS:GO advantage completely. 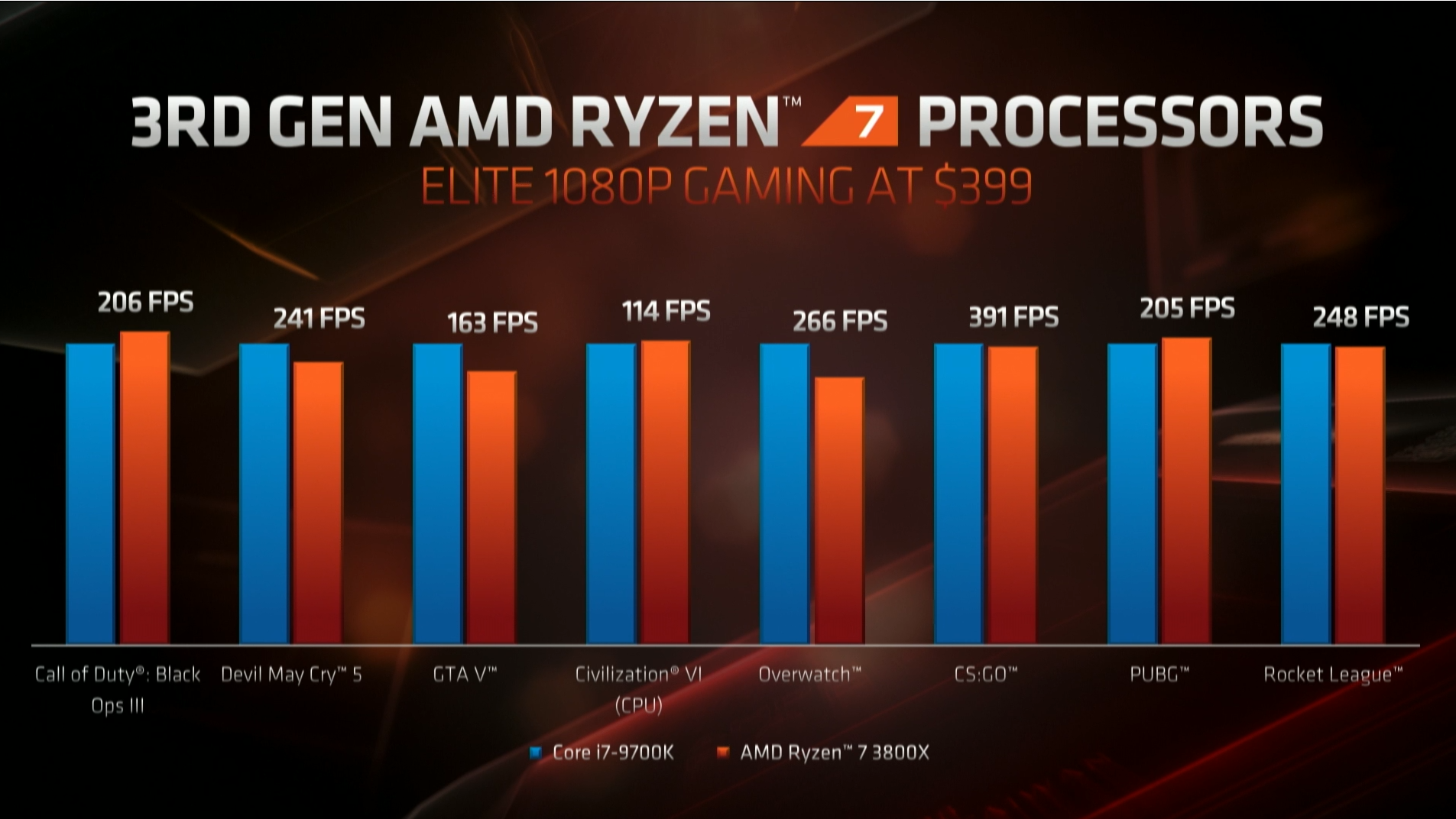 Things looked a bit better for AMD's pair of Ryzen 5 CPUs, thankfully, but even there it wasn't a straight and obvious win for them. You'll have to excuse the slightly dodgy screenshot here, as AMD's Mixer stream failed just at that very second, but hopefully it's still fairly clear that only in a couple of instances does AMD offer a tangible advantage over Intel's Core i5-9600K when it comes to gaming. 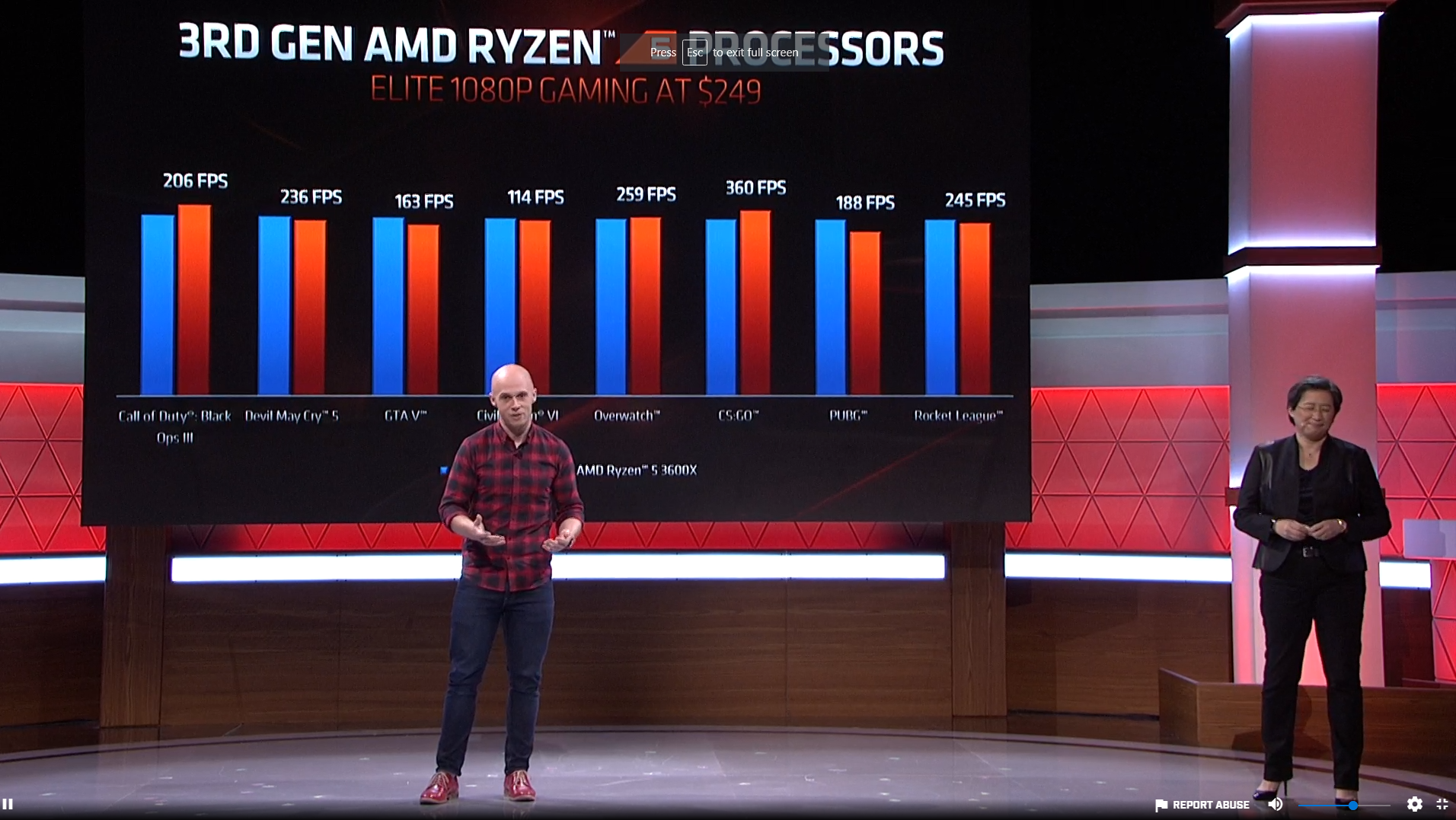 Of course, AMD's always had the added advantage of superior multi-tasking performance for more general CPU tasks, but I'll be interested to see how they perform across more demanding games once I get my hands on some review samples. And with their launch date set for just a couple of weeks time on July 7, we shouldn't have to wait long to find out.