American Truck Simulator - New Mexico is the latest and first paid expansion for SCS Software's remarkable fusion of dreamlike roadtrip game and business simulation, which is one of my favourite videogames of all time despite my having almost no interest in motor vehicles. New Mexico adds one of the largest but least-populated states into the mix, with cities including Albuquerque, Santa Fe, and Roswell. I've been playing it ahead of its release tomorrow.

This New Mexico is not the America of the movies - at least not all those cowboy movies and 60s road movies that are evoked by American Truck Simulator's initial California/Nevada/Arizona stomping grounds. New Mexico is more the America of modern television. There's the Breaking Bad connection, of course, given that Albuquerque is one of the major cities in this latest, state-sized expansion, but it's more than that. This is anyplace America, not a cinematographer's America. 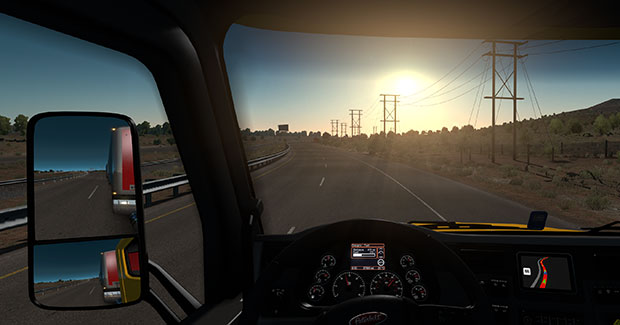 There's a shortage of widescreen romance in this New Mexico, and instead a quiet sense of not quite desolation, but certainly something lost, something less straight-backed and self-confident. The sort of America we see in contemporary television dramas that flirt with existential angst in modern America - starker places, nowhere places filled with nowhere faces and oppressive, lifeless architecture.

For instance, though Washington State is doubtless several expansion packs away from release, New Mexico most evoked the recent, incomparable season 3 of Twin Peaks for me. (Or perhaps I have been programmed by that show to respond to on-the-road experiences very differently than before). Which is to say, haunted and lonely rather warm and celebratory.

I did not pursue sights as I did in the other states, but instead followed the trail of a sad murmur that haunts everything from the tacky inflatable roadside aliens in Roswell to the sporadic tumbledown farms amidst the endless, scrubby desert to the almost deadening blankness of places like Las Cruces, Raton, even the weirdly one-note, semi-industrial sprawl of Albuquerque itself. 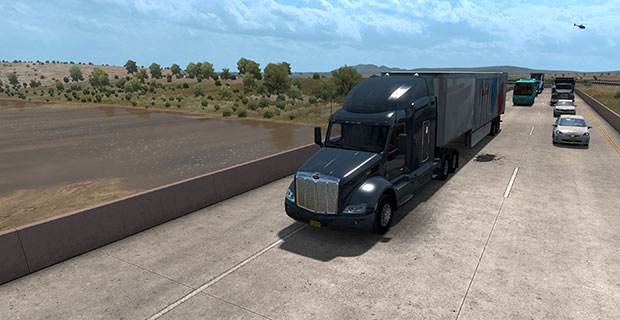 The famous Rio Grande river, for instance, was not a dramatic flourish of crystal water, but a brown scar across a concrete land. The New Mexico DLC is not out to impress in that way: it is there to be modern America.

These are not places that make you sigh and long to be, but places you drive through with a slight shudder, relieved when you have left them and have returned to the dramatic telegraph poles and satellite dishes of the vast, abandoned-feeling land outside.

Does that sound like I enjoy my time in New Mexico less than I do my time in ATS' other states? Not a bit of it. When I drive, I drive in search of a mood. In California-Arizona-Nevada, that mood is one of a yearning for freedom: the open road, no masters, no simple life. In New Mexico, that mood is one of almost savage introspection. I don't want to stop in any of these places, I don't have anywhere particular I want to reach: I just want to drive, and think, and mourn for lost things and lost people both real and imagined. It is purgatorial rather than a liberty song. 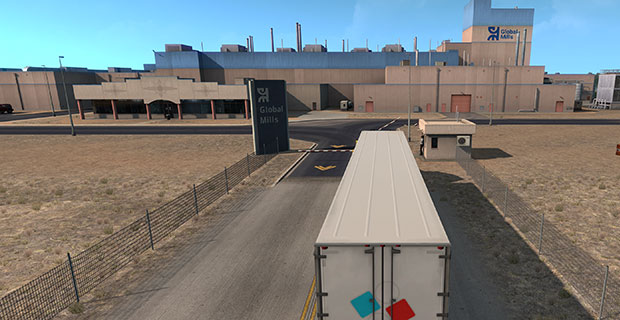 This is not to say that New Mexico (or, at least, this rendition of it - I can't speak to how accurately it has recreated the feel of the place) is ugly, or without beauty. Many of the towns and cities are deeply dour places - too stark, too uniform, and without a personality of their own - but the land around them is grandiose and changeable, if forever fairly arid. There is, I think, a little more detail and variety than in earlier states (this expansion brought with it many new art assets in addition the land and road itself), and it feels much more like somewhere I want to explore than the other zones did.

I turn off down side roads and unwisely stare out of the window out of curiosity, whereas before I tended to unswervingly A-to-B it. Again: I have seen little that awakens real-life wanderlust in me this time, but I am grateful for the chance to see it here, and doubly grateful that ATS now has an "ooh, I wonder what's over there?" element that was previously lacking. And, if you do want levity, Roswell's oddball mix of tackiness and civic blandness is a treat for the wry eye. 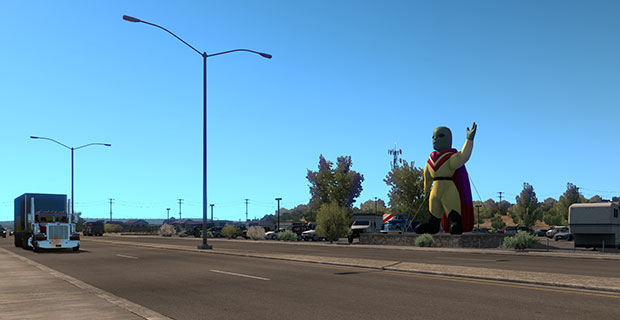 The downside of this small step up in a sometimes slightly sterile game's sense of life is that it reveals other limitations too keenly. All this world they've made, all these wonderful/bleak sights, but I can only really see it from within a cab and after extensive fiddling with camera modes. I don't want ATS to evolve into some kind of city sim, because to undermine the purity of its road might just destroy it, but as it slowly looks better and better, it feels increasingly absurd that there isn't some kind of first-person, on-foot mode.

I don't ask for interaction: I just want to get a better look, and to evoke that other critical element of the road trip, which is getting out to stretch your legs and take the air in a strange new place. It's not a small thing to ask for, I know, but by this point, with so much world and, if you travel the length of the game, trips this long, it feels by now necessary.

I'll also raise a call for a better lighting system. Under the hood, American Truck Simulator is still 2012's Euro Truck Simulator 2, and sometimes it shows. Sunsets and night time look great, the wash of colour or dark hiding a multitude of sins, but in full daylight there is an abiding plainness to those shrubs and skinny trees and acres of beige dust. A little more shadow, a little more variety to the light: again, not a small request, but it could achieve great things.

As such, New Mexico is paradoxically both everything it needed to be and at the same time merely a roadside motel halfway to some better destination. Its combination of heightened detail and less iconic, therefore more authentic-feeling scenery makes it an essential puzzle piece for what this game will one day presumably/hopefully become.

I.e. not just the greatest hits of America, but all of it, the rough with the smooth, the desolate with the thrilling, the places you want to escape from with the places you want to move to. Already, New Mexico makes ATS significantly different - that much more varied, more of a place to explore, rather than just one to tick tourist traps off the list.

And that drive, the big drive, from opposite extremes of this new map? Now that drive is an afternoon-long odyssey. Just imagine what it will become. Next time around, American Truck Simulator could go to Oregon, Utah, Idaho, Colorado or Texas. I pray it will leave the sand and rock behind for a spell and go North next, to the mountains and the forests and lakes. Show me different things, yes, but also give ATS the spur it needs to really, truly do trees right.

Do Oregon and then Washington and I will do my Twin Peaks road trip, and I shall need no other game.