Last week I played the prototype demo of Among Ripples: Shallow Waters, and although it was in fairly basic shape, I was both enthused and touched by it. Enthused, because it proved that tycoon games don’t have to cheerlead for the idea of the natural world existing only to fuel exponential financial growth. And charmed, because it chose European freshwater fish - a lifelong, inherited obsession of mine, woefully underrepresented elsewhere - as its subject.

Even though the demo was barely an hour long, I was still thinking about it days afterwards, so I got in touch with Martin Greip, creative director at developers Eat Create Sleep, to chat about it. We ended up in a long discussion of how management games can subvert capitalism, conservation in the Baltic region, Star Trek, BioShock, and (of course) crayfish. The best bits are below. And if you want to know more, Among Ripples has is going live with a Kickstarter this Tuesday, so you can join my unreasonable pressure campaign to have eels put in the game.

The game is about ecological repair. You’re trying to reclaim wilderness that’s been chewed up by human activity, and make it flourish again. There’s not a lot of story in the game at present, but the player seems to be involved in some kind of wider organisation. Is this about local cleanup, or an academic thing?

Bigger, actually! The backdrop is Earth around 2040 when we've cleaned up our attitude and, in desperation, banded together. The organisation in Among Ripples: Shallow Waters is modeled on a supranational union of sorts, similar to the EU, or the UN. But imagine a UN that has some actual support behind it. So I guess the Federation from Star Trek might be a better example... ‘90s Star Trek, mind you! And the player is part of the "Freshwater Biome Restoration Divison", which is just one of, say, 200 teams around the world. I know this sounds like fanfic at this point since it's not really in the game yet, but we want the story to actually matter in the final game.

What kind of story do you want it to be?

A sort of sombre story, akin to Kentucky Route Zero's delivery. Not a hopeless one, though. The game is built on the mindset that the current economic systems just can't support this kind of rehabilitation. If you tried to fix things under the current system, you'd just end up destroying them again before long, unless you also fixed the underlying systemic problems.

We don't aim to come up with a better economic or political reality through game mechanics - if we could, we'd be revolutionary leaders instead of developers.

Still, it’s good to see a game with a utopian vision for once, rather than another neon dystopia.

Yes, it kind of is a utopia. Or at least, it’s optimistic. I was very inspired by Robert Yang's call to action on RPS a few months ago, actually. Personally I'm too pessimistic to expect a perfect world - and so while this is a world that actually is sane and will survive, it’s not like it won’t have problems. With the title "Among Ripples" we wanted to communicate the cause and effect present when it comes to ecology. Every decision ripples outwards: “the mess was yours, and you're in it”. That's what I meant with 90's Star Trek, by the way - look at the complications in series such as Deep Space Nine, and you’ll see that even a federation can go astray. So yes, we want conflicts and struggles to persist. In fact, I believe humans can't be without them.

Can you think of other games that have inspired you by subverting default capitalist/expansionist narratives?

Several games have examined the problem of relying on endless growth on a finite planet, but mostly through narrative. I love the Oddworld game setting - especially Abe's Exoddus. As an 11-year-old, dismantling industrial meat farms and bone breweries built on the exploitation of ancient burial sites, and seeing indigenous people fighting back, was eye opening, especially compared to most of the games I played as a kid in the 90's. But as Chris Franklin (Errant Signal) touches on in this fantastic talk, there's only so much you can explore in ‘spatial’ experiences, like Abe's Exoddus, compared to systemic ones.

So it’s a topic better dealt with by management/strategy games, you think?

I think different genres or ways of play are better suited for different questions, but since the management genre is systemic in nature, it lends itself to "systemic narratives", like our problems with climate change and ecology. At Gamescom in 2017, I argued that BioShock would've been a much better critique of objectivism if you’d played as the manager of Rapture, having to build and hire people to sustain that place.

One thing I noticed playing the demo, is that the use of money in the game feels a bit… arbitrary, given everything else it does to break away from conventional tycoon games.

The economy right now is pretty abstract, yes. As you can understand that has been the most difficult task, as the management genre is sort of entrenched in the capitalist/expansionist system. For the final game we will model the economy more on public funding, similar to how ecologists work in the real world. Depending on the performance of the player they'd receive different amounts of funding, reviewed each season.

Are you working with any scientists or orgs doing this sort of work IRL?

Yes, we're situated on the island of Gotland in the middle of the Baltic Sea, in the town of Visby. The Baltic Sea has big problems with pollution and over-fertilisation, and it's actually one of the most polluted oceans in the world. Gotland also has problems with freshwater reserves, so there's a local organisation called "Blått Centrum" or "Blue Centre" that specialises in that. We do fact checks with them, to keep our simulations within the range of possibility.

How complex do you want to get in terms of modelling different kinds of pollutants, and different water chemistry variables? It would be interesting to see nitrogen cycle stuff, for example, or algae blooms from fertiliser runoff.

We haven’t looked into the nitrogen cycle specifically, but we plan on having algae being affected by the quality of the water, plus pH values, toxins and nutrients. There are many more factors, but we wanted to keep the game accessible to a general audience. It's not always easy to make something an engaging game and a simulation at the same time - but even the ecologists say the models they use are usually simplified as well. Regarding algae, yes. That will be an issue, as players will need to find a balance between keeping it as a food source for primary consumers (like dace in the demo), and experiencing a full algal bloom which can cause a collapse of the ecosystem. We plan on having game levels with various themes and create a different challenge for the player. For instance, a body of water close to a farm or an abandoned factory. 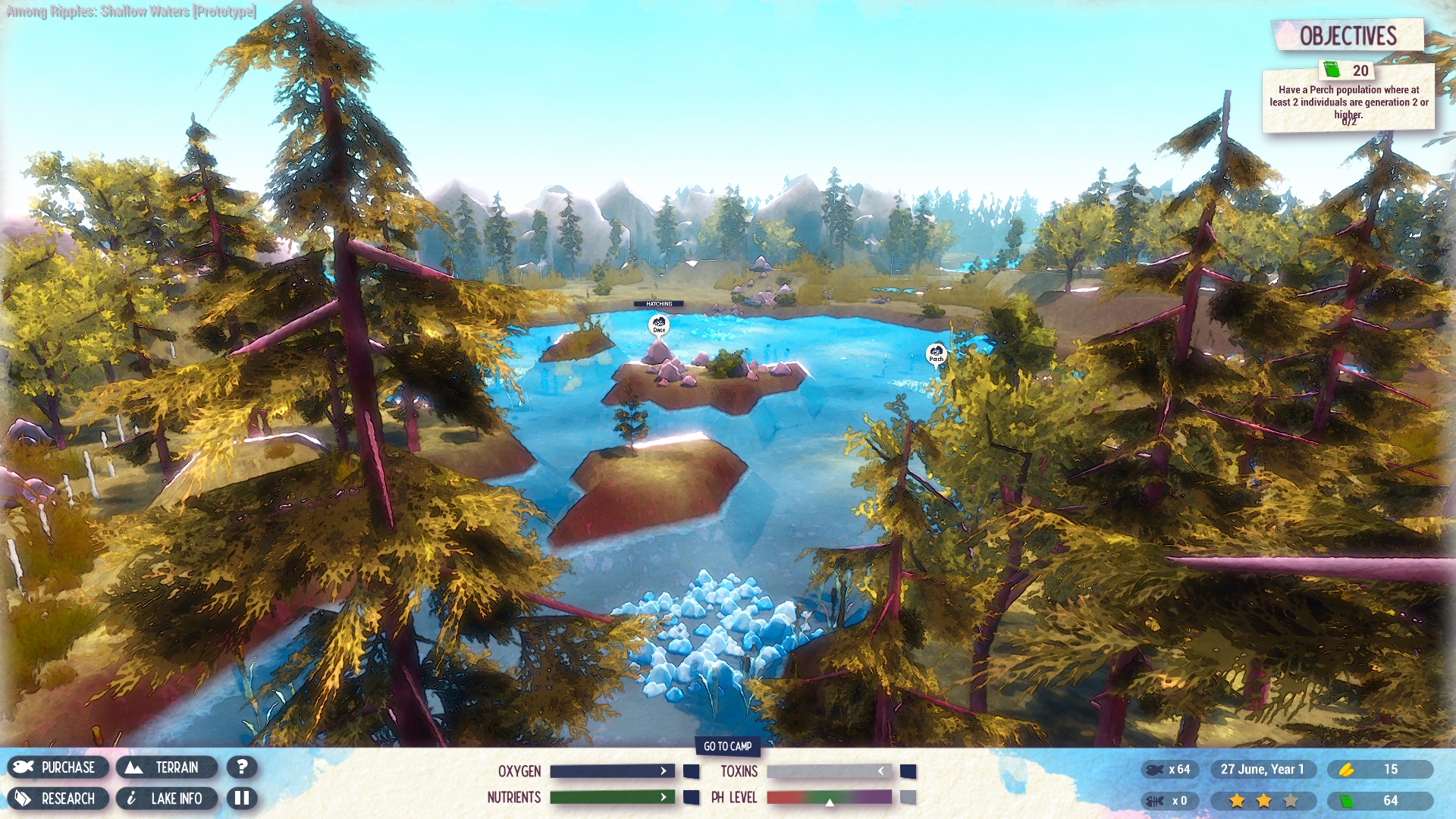 I often argue conservation narratives shouldn't just focus on "big name" environments like the Amazon etc; clearly they're vital, but there's so much that could be done if people looked to their local environments more as well. I’m guessing you agree?

I remember when I showed the first iteration of our prototype to Gunilla, one of the local professors in ecology. She just exclaimed "[...]people just want to save the cute animals!". Actually, that moment really made me start thinking that the game shouldn’t just be about the animals themselves, but the ecologists on the frontlines. Their unique perspective is as interesting as any simulation, and it gives a much-needed human connection to this difficult topic.

How many species are you aiming to get in the game?

In our planned design (not present in the prototype) there are 23 different species of animal, plus 12 different aquatic plants and 4 different trees. It’s limited by our ability to implement it all together, but it’s a great starting point from which to add more if needed during the development.

Will you be looking at smaller organisms - daphnia, insect larvae etc?

We have thought about it, but decided against it, since it’s going to be difficult to simulate it in a way where the player can actually see them and manage them. We made the decision to have the algae represent all of the “smaller” entities, instead making them more tangible. It's a reasonable abstraction in my opinion.

I guess I can live with it. I mean, I can’t complain, given you put my beloved crayfish in. Crayfish are a big deal in Sweden, right?

Exactly the same situation in England, actually - only our native species is austropotamobius pallipes. Funnily enough, some lakes near me are also home to some of our last few resilient populations.

If there's one thing I'd appreciate people understand from the game, it's the crayfish situation.

Amen! Now: what is your personal favourite freshwater fish?

I think I'd go for perch. As a kid I used to spot them in local lakes, swimming ponderously in small shoals close to my legs, sometimes curiously nipping my feet. Most freshwater life in Sweden looks kind of muted, but the perch is like a striped little tiger - I'm an artist by trade, so I like expressive colours and patterns! Second place is the pike. As a kid it felt like a mythological beast, like a dragon. I had heard stories of an aggressive pike in our local lake that had bitten my friend's big brother. In Sweden we have a sort of animistic/folklore belief about a "Gammelgädda" or "Ancient Pike", which inhabits each lake. It has survived other fish and even humans, and is too clever to be caught. It might even be dangerous to adults!

Believe me, I’ve heard the stories. Dad genuinely used to read me bedtime stories from The Domesday Book of Mammoth Pike. Have you ever seen a Gammelgädda?

Sadly, I have never encountered an ancient pike or any other pike.

You knew this was coming, but: are eels coming to the game? I will pay if I need to, in order to ensure their inclusion.

They are sadly not planned at this moment. But since you brought it up, our game designer Emelie has been intrigued by its potential and what it might be able to add to the game. No promises, but it will be considered.

I’m living for it! What else is planned to go in, other than the eels that are definitely being included?

When Among Ripples: Shallow Waters is a thing, we want to expand the story to other parts of the world. We also want to do an ocean game, and a game with forest management as well, all in the same setting we loosely refer to "Among Nature". There’s only seven of us at present, but when we've got some well needed funding we want to grow the team to around 10.

What do you hope to achieve from this game?

The core belief behind it is that we feel like we can actually make a difference. These are really hard questions, and we go for the angle: "alright, we've already established that it's a problem, so what should we actually DO?". To me, one of the most fascinating and important aspect of games is to ask questions, I think it's a very healthy way to re-examine the world, and to go all-out pretentious, I'll finish by quoting Frank Herbet's Dune books: "Irreverence is the only way left to us for testing our universe." I want players to test the universe in our games.

Fear is the Mind-killer. Thank you!