The Game Devs of Color Expo - an inclusive celebration and showcase of the work of developers from a broad spectrum of backgrounds - took place this weekend. As well as talks from different developers, GDoCE put on Gradient Convergence, showcasing a collection of cool games on Steam.

I was fortunate enough to jump into one of these and visit a universe built by Xalavier Nelson Jr., and it has left me with a big smile on my face, but also with a strong desire to spread the good word of the dogs that I met on my travels. You see, I am talking about first-person adventure An Airport For Aliens Currently Run By Dogs. A fine place. The finest place.

It got me thinking. Airports are bizarre ecosystems where everyone’s only reason for being there is to escape, but this one, I am reluctant to leave. Even though my purpose is to find my fiancé out there in the galactic beyond, she is now the second, or in fact least most important thing in my life. The dogs are what’s important. They are trying their hardest to run things smoothly, and sure, it is total, utter chaos, but it’s adorable. Sometimes unnerving, but mostly adorable.

I’d like to introduce you to a few of the best dogs. I was going to ask if that was okay, but you don’t get a choice. Trust me, it's very important. 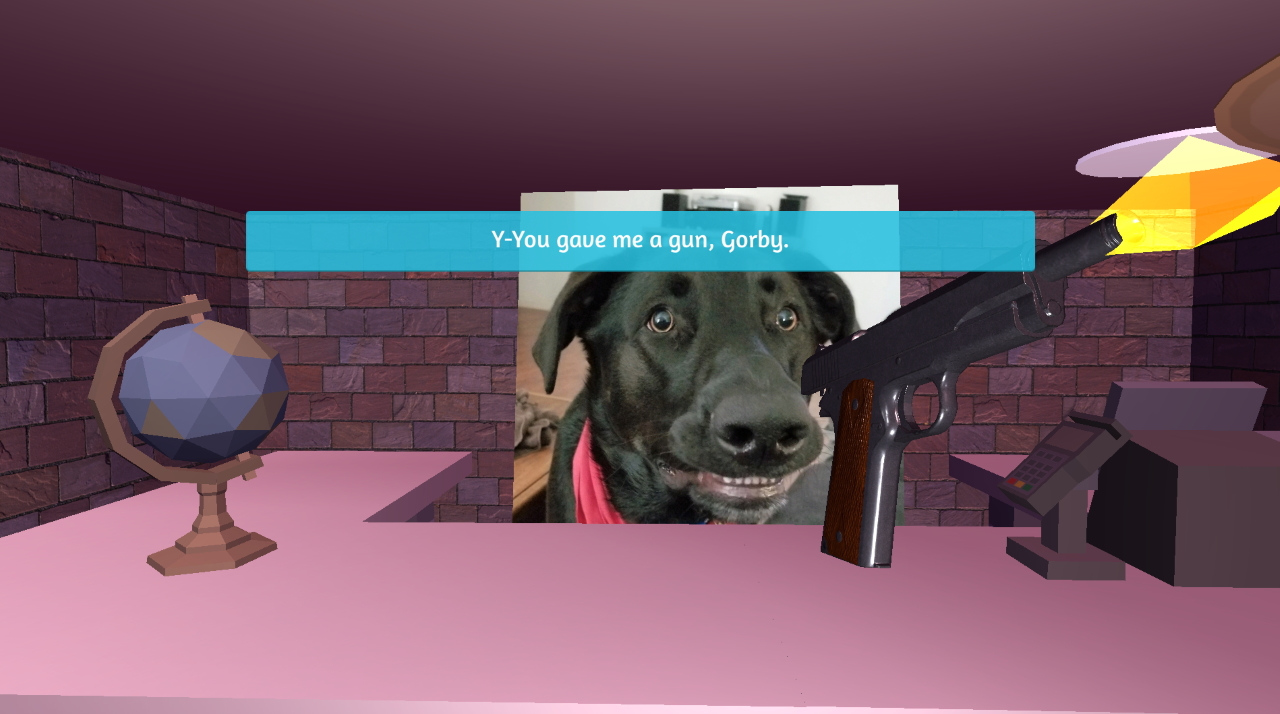 My favourite pooch is called Gorby. He runs a souvenir shop in the airport and he’s lined the shelves with model rockets and space shuttles and all things starry. There’s even a little globe on his desk. It is quaint and unassuming. Behind the counter he smiles - sort of. Actually no, it’s more like the flap of his gums are being peeled back by a cosmic force. I can see it in his eyes, which radiate fear, but also recognition. Gorby knows something we don’t. 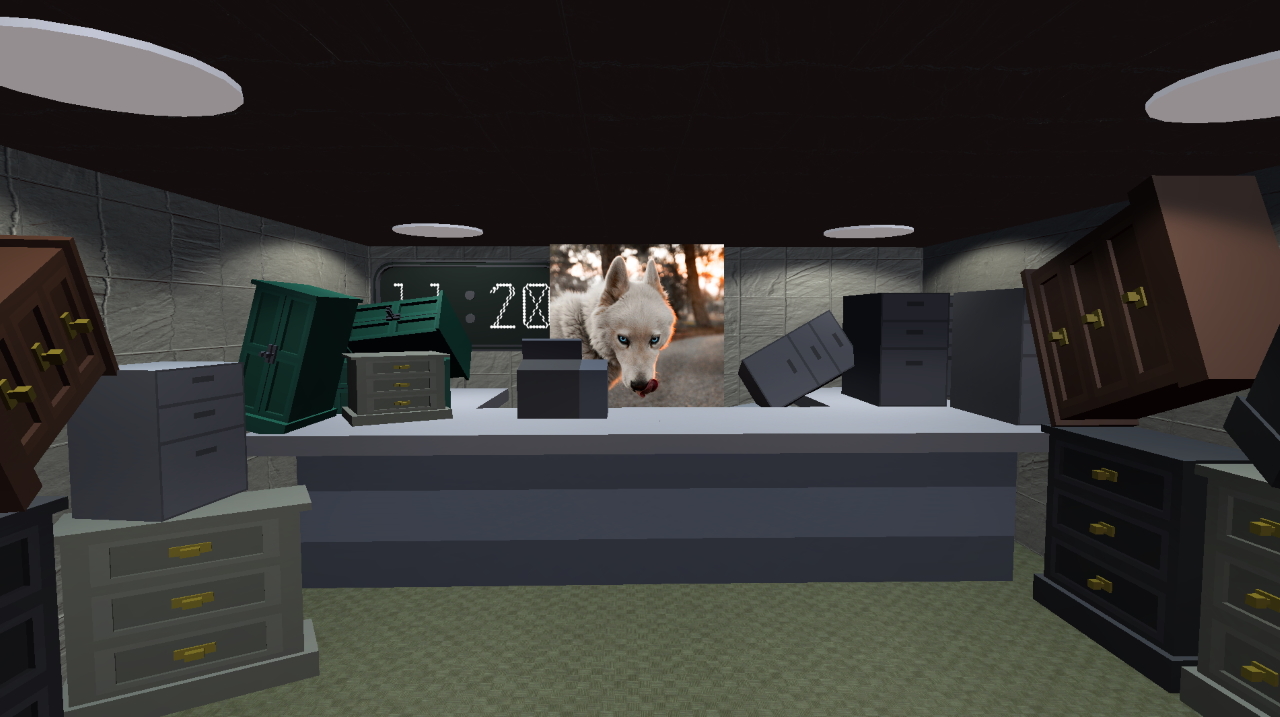 Next, say hello to Cabinet Dog! Okay he might look a bit sinister, but rest assured, he only has one thing on his mind - cabinets. I mean, he’s bought every single cabinet in the galaxy! It’s actually a bit of a problem, though, as he tells me he’s “drowning in cabinets”. Still, if you need a cabinet, this is the place to be. I recommend you go and buy one. Take a few off his paws. Save him, please. 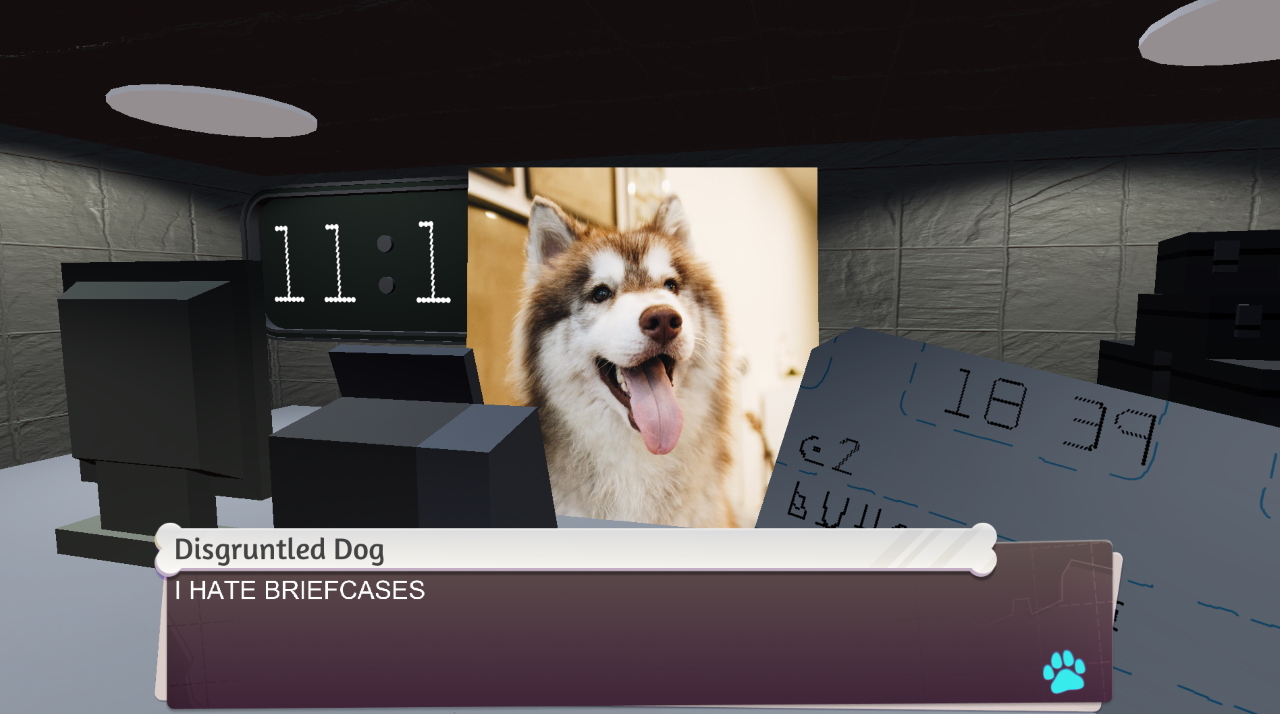 Ah yes, Disgruntled Dog. Now, here’s a responsible mutt who is trying his best to support his family by selling briefcases. Aliens need briefcases to do business and he has capitalised on this demand. I’ve heard he’s the “best salesdog in his division” and a “compassionate husband”, I believe both of these things. One thing you’ll struggle to believe is his hatred for briefcases. He despises them, hates everything to do with them. 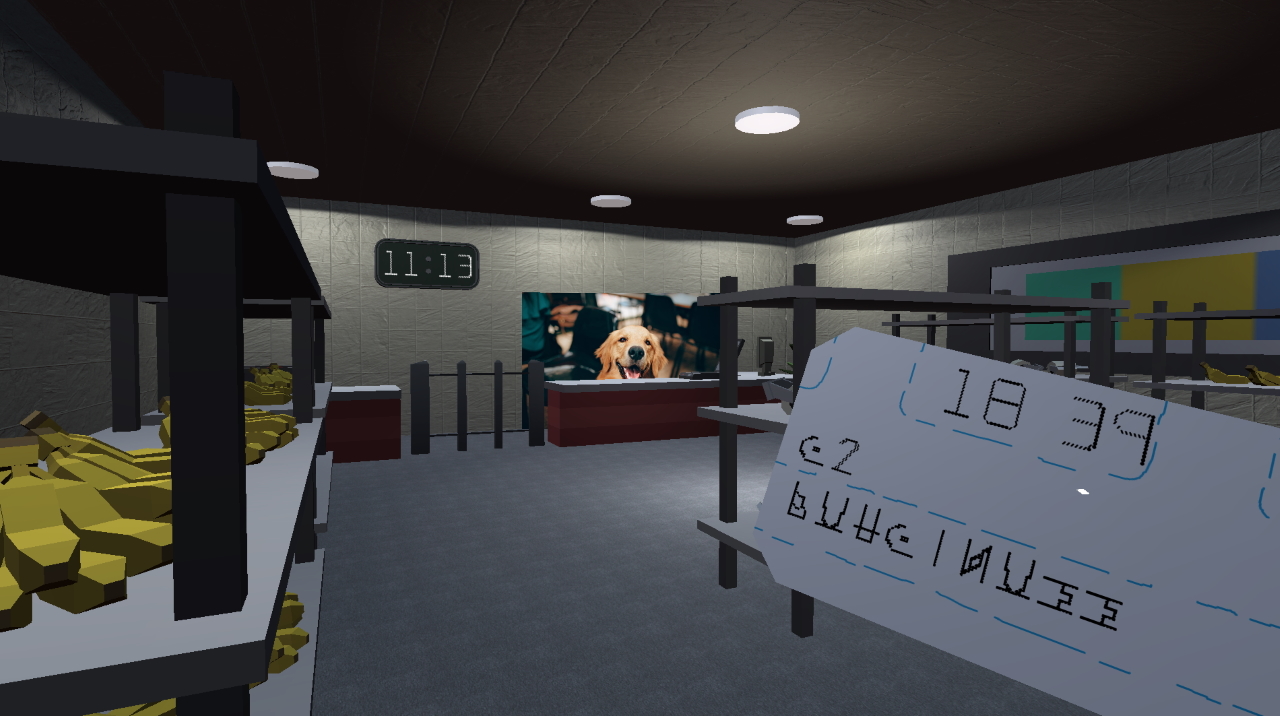 It’s all getting a bit serious, so let's raise the mood. Friendly Business Dog’s a ray of sunshine, a golden retriever with boundless energy and a foolproof business plan. He runs the airport’s toilet paper and banana store. This might not make much sense at first, but if you think about it, it clearly makes perfect sense. Customers eat the bananas; the toilet paper is for cleaning up the mess. God, these dogs have such excellent business acumen! 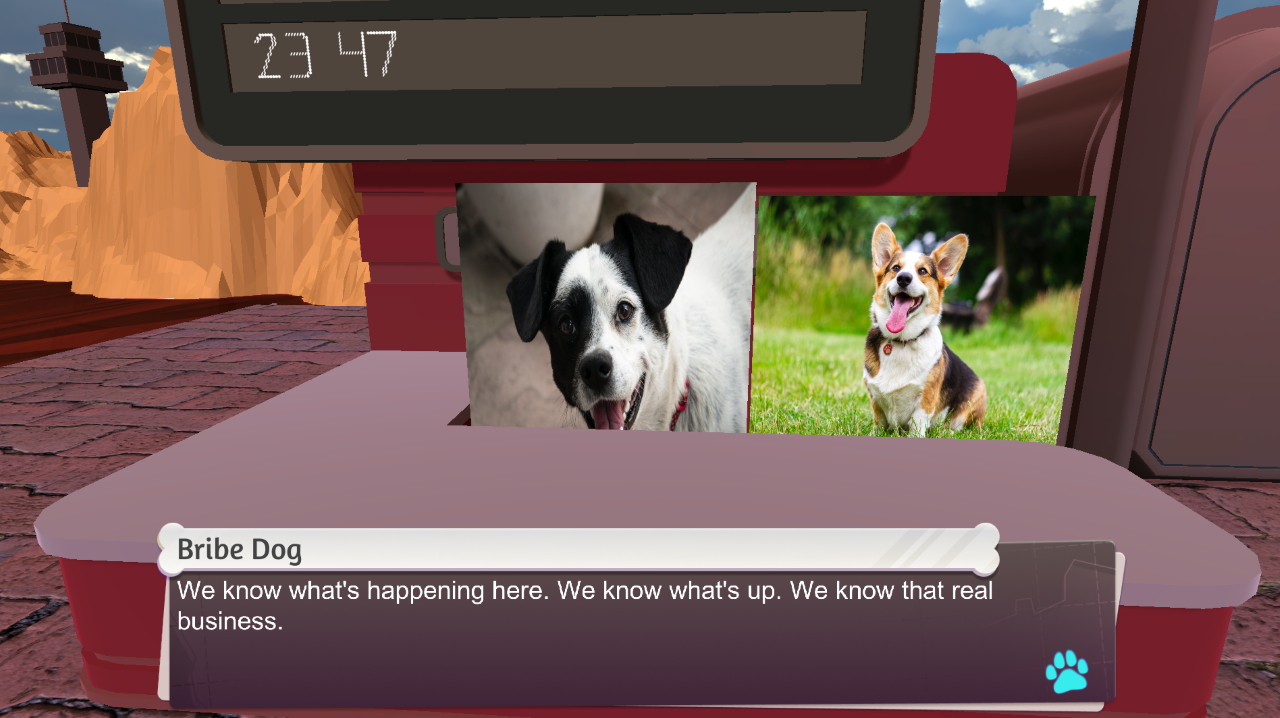 Mischievous dogs are lovable creatures, and Bribe Dog is certainly a naughty boy. Here’s a little diary entry from when I ran into him:

"I’m a bit early for my 19:34 flight to an alien planet, so I whip out an entire bed and sleep for a few hours to pass the time. I hand over my boarding pass to the Boarding Pass dog, who happily announces the GATE IS OPEN!!!, but the gate doesn’t open. Ah! Who’s this at the desk? I talk to Bribe Dog, he has a crazy look in his eyes. He demands money, so I give him a stack of dollar dollar bills - I don’t question his motives. I know he’s corrupt, but he’s ever such a good boy. Plus, he’s now opened the gate for me. It’s time to fly?!" 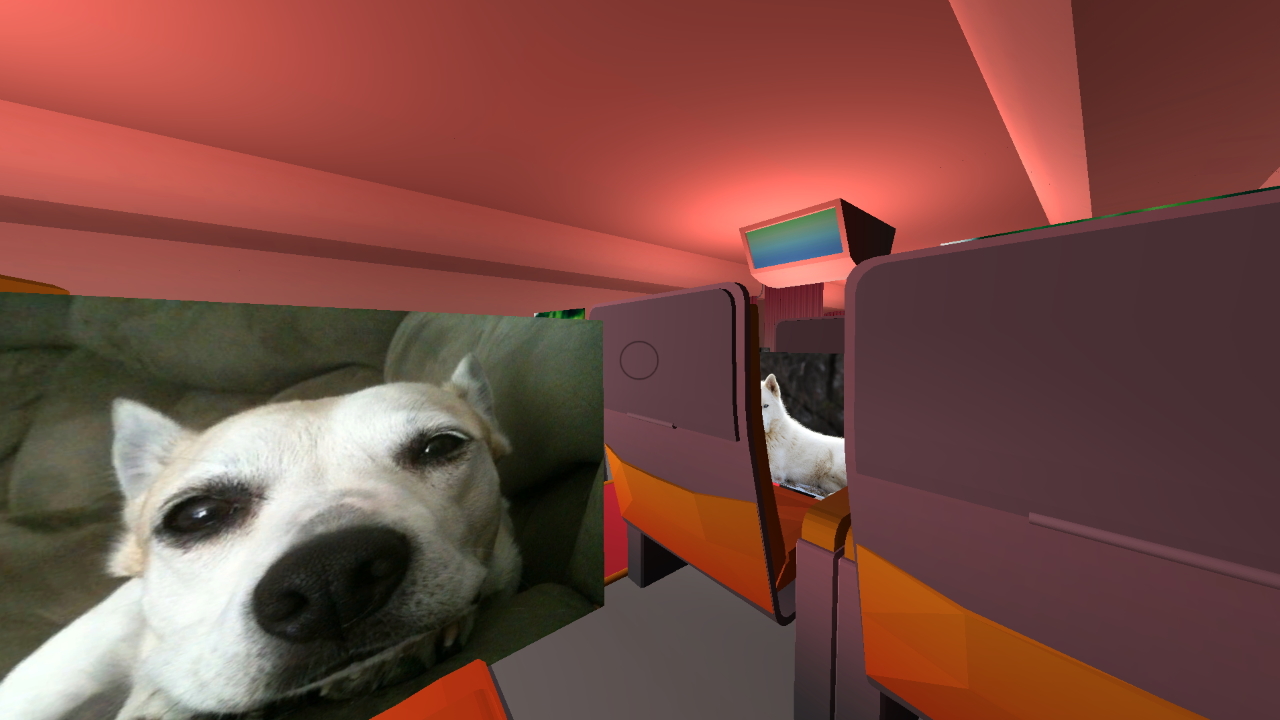 I encountered Surgeon Dog on my first flight, sitting to my left, staring at me like a toddler. At first I was a bit apprehensive, but I thought I’d make the first move, see what his deal was. Turns out he’s a lovely, intelligent canine. We had a sleepy chat about life, about how I’d been feeling a bit aimless, like I’d been in limbo. He then came out with something quite profound about how it’s quite nice to not have responsibilities sometimes or have a bunch of them at once. He compared it to college, and I thought about my time at university. It brought back a flood of memories, both of long nights trying to hit the word count and coming home to a house littered with pizza boxes.

Thank you Surgeon Dog, I hope wherever you are now, you get a well deserved break.

You can wishlist An Airport For Aliens Currently Run By Dogs on Steam. It is currently predicted to release some time this decade.

Disclosure: Xalavier Nelson Jr. has written a bunch of articles for RPS over the years, but this doesn't have a bearing on the goodness of the dogs.