Omikron: The Nomad Soul was one of the first games I remember properly playing. This means it’s inevitably one I remember fondly; it is the reason I hold out hope, every time, that Quantic Dream’s next game won’t be a well realised but absolutely complete disaster. Incidentally, you can get it in the current Steam sale for like a quid. I replayed it to get screenshots for this piece, and of course realised that actually it might be a complete disaster as well.

The controls are an abomination, combined with a Cagian, I-am-an-auteur style camera that snaps to a new angle every time you enter a room, usually in a top corner (the better to evoke constant CCTV monitoring by a dystopian deep state). There’s a scene where you can have sex with a lady whilst in the body of her husband, and she doesn’t know you’re not him. Come on, mate. That's not on. But there’s one thing of undeniable quality that Omikron does have, and that is David Bowie. 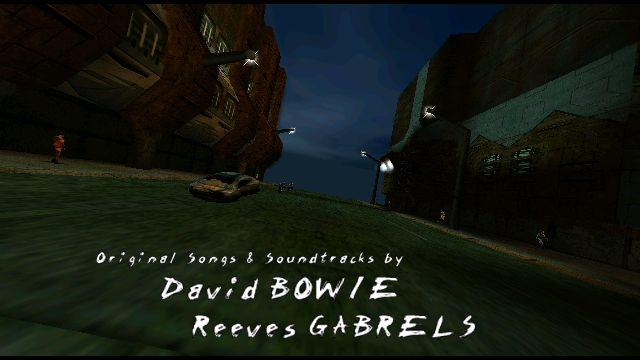 I’m a big fan of Bowie because my older brother was, and musical tastes got handed down in the same way that old books and the nicest bedroom did. Omikron was his first and only video game role. Bowie not only wrote a lot of the music for Omikron (the opening credits are a movie-style zoom over bits of the grimey megacity set to New Angels of Promise -- a bunch of the songs he wrote for Omikron ended up on his album Hours), but is in it as a sort of messianic revolutionary leader called Boz. His likeness was also used for the unrelated lead singer of an in-game band called The Dreamers. Sometimes you walk into a bar and are essentially party to a five minute long Bowie concert that you weren’t expecting.

Omikron’s framing is that Kay’l (pronounced Kyle), a police officer from another universe, has managed to break through to ours through, er, your computer. He wants to swap places with your soul so that you can carry on his investigation and save the world and so on. Given that he’s caretaking your body while you’re off playing Omikron, one hopes that he’s more respectful than you, the sneakfuck wife shagger. If Kyle’s body is killed, your soul migrates into a new host in the game, which is a kind of literal transhumanism -- not to mention the fact that you’re canonically experiencing this because your soul was able to migrate through a computer.

It’s Bowie’s character Boz that is the purest expression of cyberpunk shenanigans in the game, though. Omikron is ruled over by a hyper-intelligent AI called Ix. The world of Omikron is essentially a post-apocalypse and cyberpunk setting all in one; following a famine and a civil war, Ix was put in charge as it was decided that a human leader would not be able to make the correct decisions to avert further disaster. Ix watches over everything using security cameras and even assigns you your relationship. Boz was a hacker, adept at hiding his identity and escaping the clutches of Ix -- until one day, some of the demons from the game's A plot tracked him down. At the last moment, Boz was able to transfer his very soul into the Omikron network.

Meanwhile, in what I believe the kids call meatspace, there are spirited arguments for Bowie himself repping as a transhumanist cyberpunk. Bowie was already the king of transformation, having already migrated through being Ziggy Stardust, Aladdin Sane, The Thin White Duke, and the pop hits of Let’s Dance. In the 90s he was diversifying with stuff like touring with Nine Inch Nails; Omikron came out in 1999, the same year as peak 90s hacker vibe movie The Matrix. The Ashes to Ashes album Scary Monsters came out nearly 40 years ago now, and here is a very convincing essay classifying it as “David Bowie as a cyberpunk”, where the Spaceman is “coming to grips with a darker, more unpredictable future than he could have possibly imagined.” 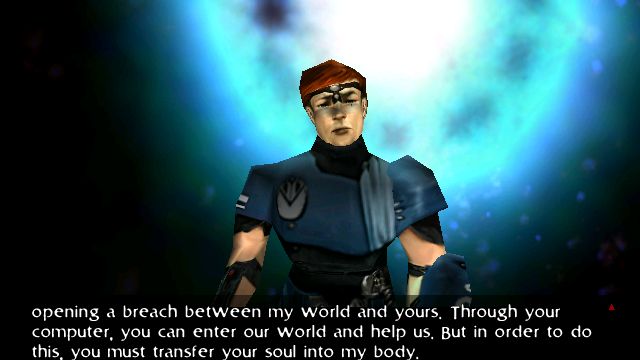 Boz’s total screen time in the game amounts to about five minutes -- you can watch them all in a single compilation video -- but they are undoubtedly the best five minutes of the game. Bowie is so effortlessly good, and so convincingly a transhumanist virtual rebel by just being David Bowie, that he makes David Cage’s dialogue about demons and ancient legendary wars convincing.

In the game, Boz existed on the network as a purely virtual lifeform. With no physical form, he was able to transport himself instantly anywhere the wires went. Any information stored on the network was at his metaphorical fingertips. When you see him in game, he manifests as a blue and gold code ghost, kind of a sexy Gustav Klimt painting. Time and space meant nothing! He had become a truly transcended being in what is ultimately quite an ordinary game that has aged terribly. It was probably Bowie’s stardust I was remembering all along.