Have you heard the good word about Angelina? It's the spawn of AI researcher Mike Cook, which he describes as "an artificial intelligence-powered research project that designs videogames". He's been tinkering with different versions of the system for eight years now, and yesterday he uploaded a collection of Angelina's best hits to Itch. They're all free to check out, and for my money that's definitely worth doing.

I wouldn't say Angelina has made many 'fun' games so far, but it sure has made some interesting ones.

Here's the collection, though I should warn you that you might have to jump through some hoops before you can play anything.

Appropriately for a news post about technology I don't understand, I couldn't get most of the browser games to work at first. They use Unity Web Player, which Chrome doesn't support by default. I was met with the same message about downloading Unity Web Player even after I'd done that and tried loading the page in Firefox, but I finally got them to run using this Chrome extension. Computers are weird.

Angelina's making them weirder, mind. I played 'Wheel and Steal' because Mike describes it as "one of the most coherent designs [the 3D game-building] version of the software ever produced", and because I wanted to know what Angelina made once it had "discovered that people feel hated by thief sometimes". Mike also mentions that Angelina came up with the game based on an interview with Pip, though sadly I can't find any online record of that.

I wandered around a maze for a few seconds, then chased a small floating model of a fort into a corner. You beat the game by reaching a yellow cylinder, so when I spotted that five seconds later I strolled up to it and won. 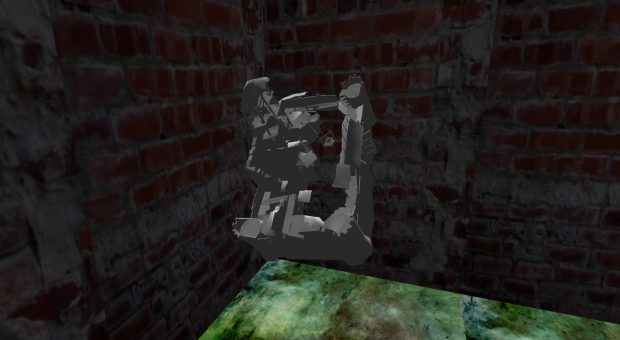 It's not a good game, but it is a neat accomplishment for a learning algorithm that began with extremely limited knowledge about the components that constitute a game - let alone a compelling one. As Mike points out, the music that Angelina selected does fit the unsettling vibe given off by the textureless grey guards that roam about stuck in T-poses. Plus, most of the textures that weren't afflicted by a texture-stripping bug do indeed seem appropriate. Apart from the nuts.

If you were at Rezzed, you might have spotted Angelina in the RPS room. As Mike says below, that was the first time a live audience got the chance to ogle the latest iteration of Angelina, which shines light into its previously black box and displays (some) of its decision making process.

There's a quirky joy to the destinations Angelina arrives at, but it's the routes it takes to reach them that really fascinate me. That post is well worth a read if Angelina's piqued your interest too, because it describes Angelina's new direction and a "philosophical shift" in Mike's work.

I asked Mike if he could give me an update on Angelina's progress, and got a mildly unsettling response:

"The last year has seen the beginning of a new phase for Angelina's development - we did our first live Twitch stream that let people watch the system design games; we had the system design games in front of a live audience for the first time, at Rezzed; and most importantly Angelina is now a 'continuous' system - it doesn't start when I tell it to, and it doesn't stop when it releases a game. It's always on, always designing, always thinking, and hopefully, in the near future, always learning and playing too."

Lewis Denby took a look at what Angelina was up to way back in 2012, when it was busy making platformers based on Guardian articles and coming up with puns.

I'm looking forward to looking back on this post in twenty years, once Angelina Corp has flooded the industry with a billion games that exceed Skyrim in size and quality.