If you click on a link and make a purchase we may receive a small commission. Read our editorial policy.
Developer: Big Ant Studios
Publisher: Bigben Interactive

Dennis Brawl was crap at tennis. She could barely tell her flats from her tennis elbow, which she had not played nearly enough to develop, but nevertheless felt afflicted by on a deeper, more spiritual level. Shots sailed passed her unwitting eyeballs. Lobs confused her, spin perplexed. Nobody would explain what an Inside Out was.

I wish I could tell you she got better. That this floundering blossomed into mastery, and that the nuances of net and racket revealed themselves like a streaker during the Wimbledon 1996 final. Alas, she quit before she ever won a match in AO Tennis 2. Or even a set.

She won a game, at least! Katherine Dietrich kept falling for her drop shots, leaving herself open to lobs into the far right court. Then that stopped working, however, and Dietrich ran away with the set, smashing shot after shot with unreasonable precision and speed. Brawl took her meagre tournament participation money, and left tennis for good. 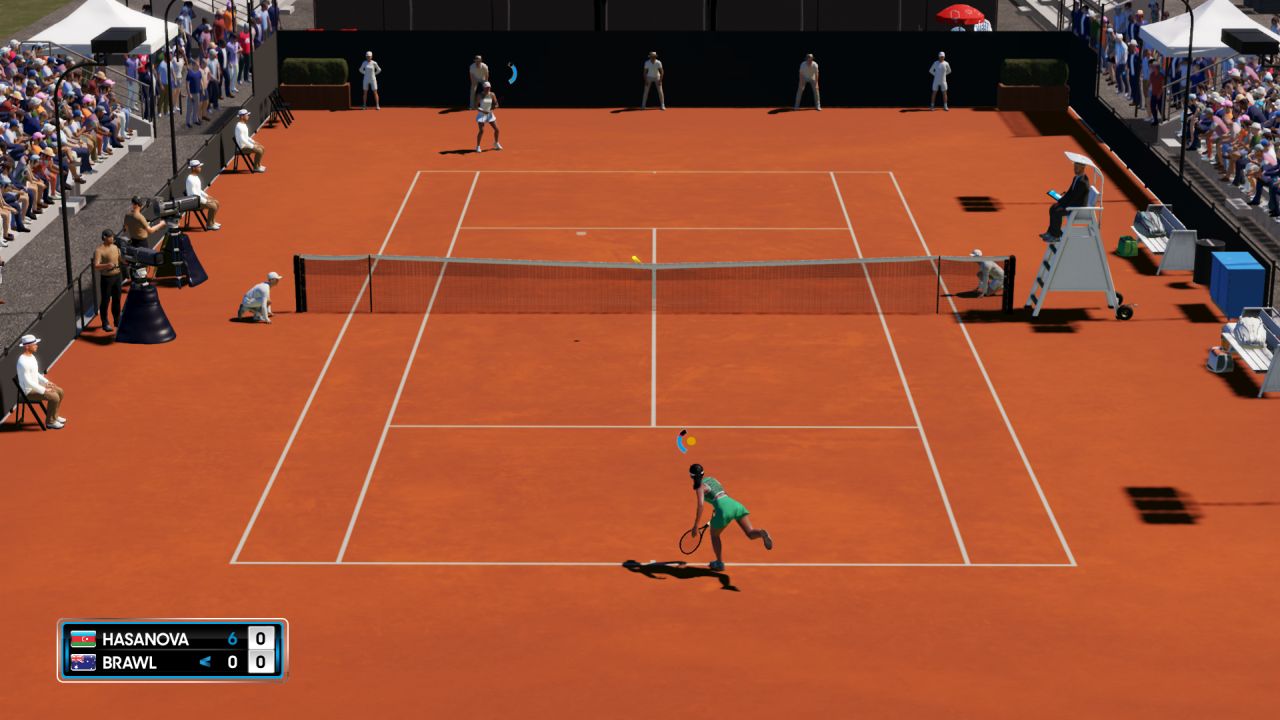 Thus ended my first and only foray into AO Tennis 2's career mode, the sequel's main and possibly only addition to AO International Tennis. I booted up the first game to check, and the tennis itself felt indistinguishable - though as you might have deduced, tennis is not my forte. I know there are intricacies I don't understand, and almost certainly more I'm not aware of. There's a very real possibility that AO Tennis 2 becomes a much better game once you have progressed passed being terrible at it. But I can't speak to that. I can only tell you that playing it badly for five hours has left me tired and frustrated, albeit with a gentle urge to go outside and play some actual tennis.

In the real world, I've at least figured out the controls of tennis. On the virtual courts, though, Brawl sometimes stands stock still, as if afflicted by the sudden and paralysing realisation that her chosen sport is primarily the realm of posh wankers. I still can't tell why this happens, but it has undermined more rallies than I can count. For every smug shot I've snuck past my opponents, they've had three or five that Brawl just gawped at. 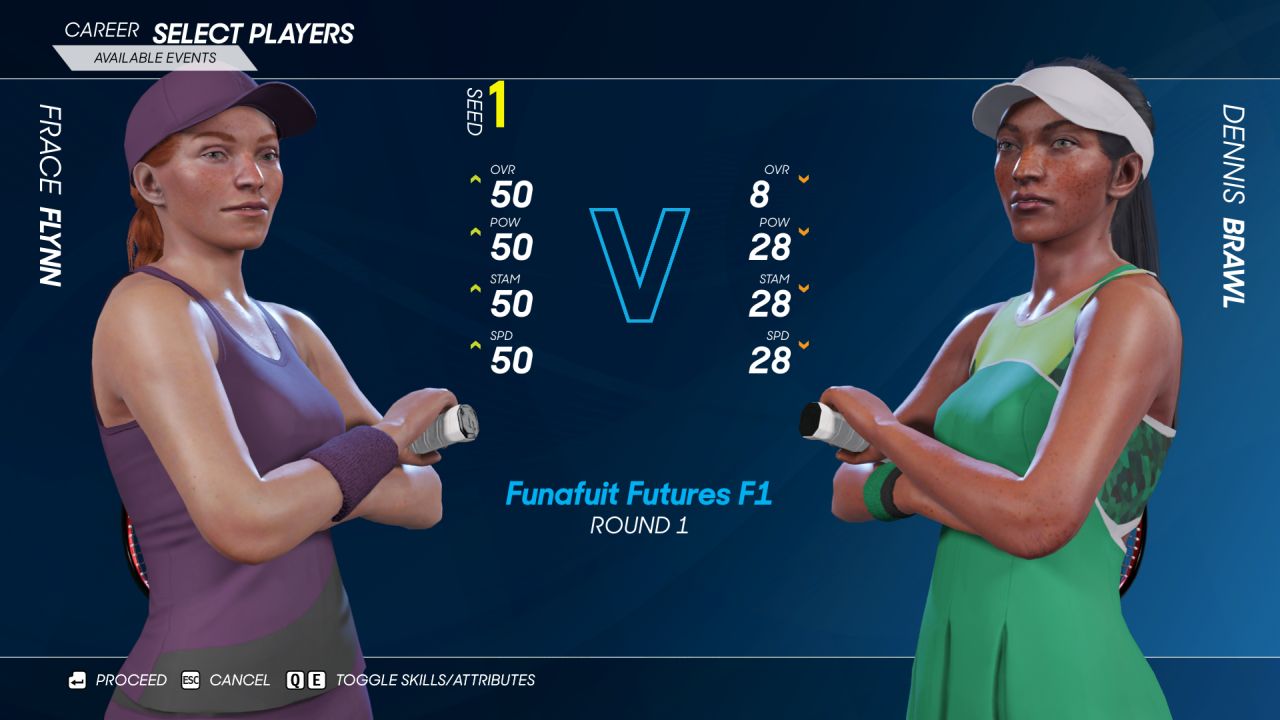 For a game about repeatedly whacking a ball over a net, there is a lot to think about at once. There are five different types of shot, each supposedly superior in different situations. At my level, I only do worse from trying to engage with this. Drop shots seem clever, forcing my opponent to run right up the net - but then they'll volley my next return, powering it into a spot I've got no hope of hitting back. There must be ways around this, but as Dietrich demonstrated, they're beyond me. I'm still struggling with simultaneously managing shot type, aiming, and timing. That's without worrying about the stamina bar, which drains as you perform more powerful shots. Or the Inside Out button, which none of the tutorials explain.

I'm left with basic strategies that don't always work, but for reasons beyond my understanding, and a reluctance to go through the gruelling process of figuring out new ones. I've tried running up to the net and attempting volleys of my own, but I don't have the patience to persevere when that goes wrong ten times in a row. On the other hand, doing basic shots is boring, turning rallies into endurance tests that get further spoiled by those shots which inexplicably bounce past me. It's at once overly simple, and completely impenetrable. Fucking tennis. 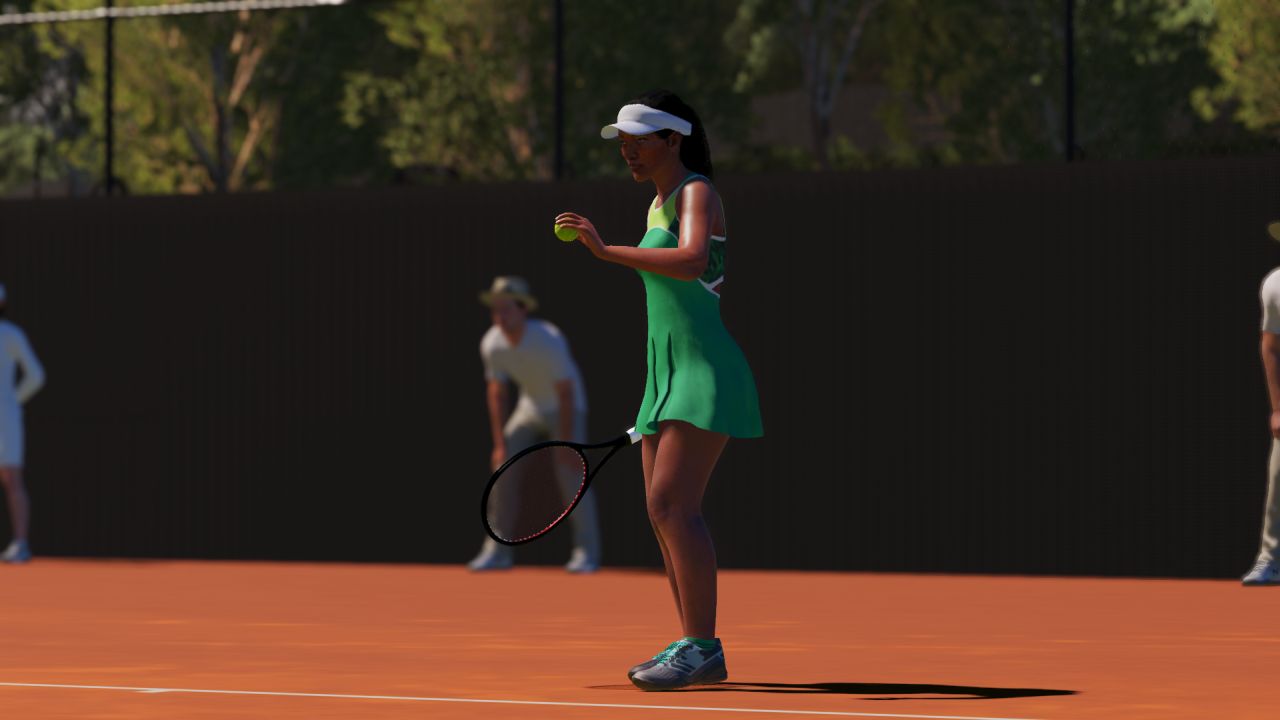 I can't help but find tennis itself too pedestrian. AO Tennis 2 lets you activate game modifiers to tweak ball speed and response times, but I want more. I want to turn the gravity off. Replace the rackets with truncheons. Transform the net into ants. Every moment feels too similar to the next, and becoming skilled enough to sense and manipulate the nuances that might assuage that feeling seems like a long and arduous process.

Sometimes, such learning curves are justified. I've played Dota 2, the king of long and arduous processes, for years. But Dota involves wizards, and the constant promise that they'll interact in new and novel ways. In that context, tennis strikes me as fundamentally barren, especially once it's been digitised and stripped of the tangible joys that come with physical exertion.

Straight-up sport simulations will always highlight what they can't, in fact, reproduce. They remind me of what I could be doing instead; of that buzz you get when your muscles do something clever without conscious effort. Because that's such an intuitive, tactile thing, it's hard to mush into a simulation that doesn't end up as a wanting facsimile. In other words, it would be unfair to single out AO Tennis 2 for replicating the banality of tennis when every sports 'em up has the same conceptual flaw.

What's the way round that? Perhaps it's a case of leaning into the absurd, at least a little, on top of straight simulation. Certainly, the non-tennis bits are still my favourite parts of AO Tennis 2. I came across some in career mode, which lets you step into the shoes of either a star player or (far more appealing) someone who's just begun their career. I like the idea of taking someone from rags to tournament riches, even though I'm incapable of doing it. There are clumsy but charming cutscenes where your coach tells you how proud he is, although so far all he's done is frame a photo of my first crushing defeat. I'm three months into my career, and that's the only thing on the wall. I don't think he has the heart to tell me to give up. 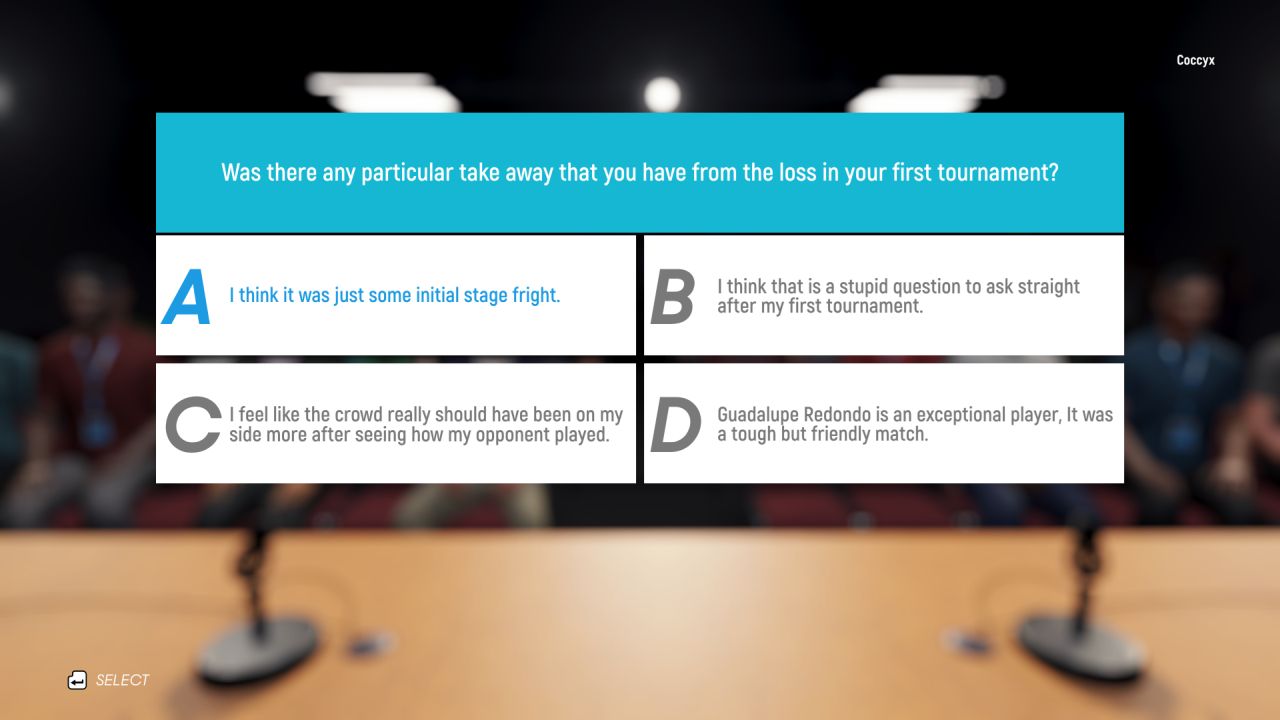 There are press conferences, too, where you get to be rude to people. I've been warned the press are now hostile to me, but demanding one of my critics play me if he thinks my technique is so poor was worth it. Sin, magnetically drawn to videogame rudeness and watching over my shoulder, told me she'd consider the game a ten out of ten if the conference had then pivoted into a match where I played against the critic. She is correct. Give me a Frog Fractions type career manager, cloaked in sincerity. Post-game screens where you see people tweet bad tennis puns don't quite cut it.

Sadly, that was my only conference. I wish there were more of them, and more opportunities to wring out some silliness. At least I got to give Dennis Brawl the voice of Belenda Bencic, a real life Swiss player whose in-game tennis grunts sound like ghost noises. If you're reading this, Bencic, I am sorry. AO Tennis 2 hasn't done you justice. 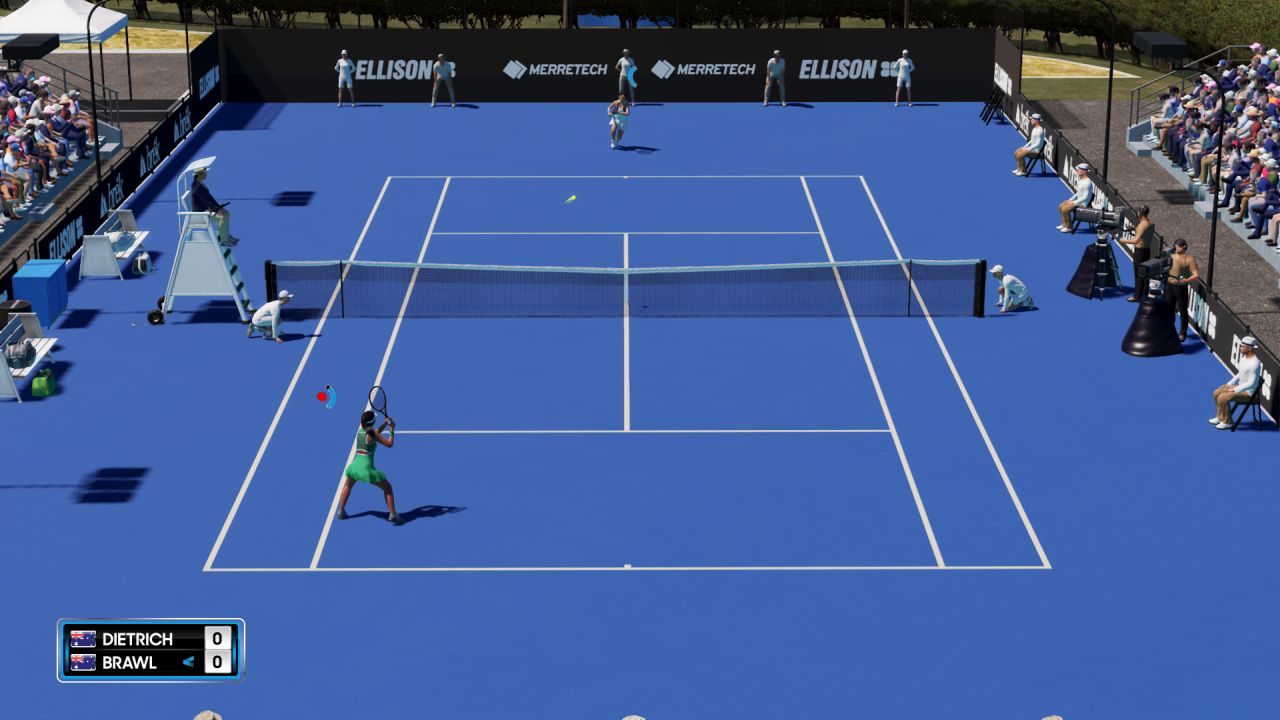 In my experience, AO Tennis 2 doesn't do justice to tennis either, even though I wouldn't exactly give tennis itself a glowing review. Beyond my ability, it might be a game where the technicalities become second nature, where I don't get hung up on fiddly execution, and where repetitive struggles are replaced with cunning strategy. I've seen glimpses of that, I think. But the road there is too frustrating, and I'm only guessing as to where it leads. I've already thrown in my racket.