Until recently, anyone looking to buy a 240Hz gaming monitor had to make do with a 1920x1080 resolution. That's fine if you're buying a screen that's 24in or 25in in size, but when many 240Hz monitors stretch that resolution all the way to 27in, many of them become ill-suited to heavy desktop work due to their low pixel densities. Fortunately, the tide's beginning to turn in this respect, as we're now seeing an increasing number of 27in, 240Hz monitors with proper 2560x1440 resolutions - a much more agreeable figure for those after a screen that can pull double duties as a work and play monitor. The AOC Agon AG273QZ is one such gaming display, offering a slightly cheaper (and flatter) alternative to Samsung's similarly-specced Odyssey G7.

Naturally, 240Hz monitors with a 1440p resolution still command quite a premium over lower refresh rate 1440p screens, but at £469 (US pricing TBC), the AOC Agon AG273QZ is still quite a bit easier on the wallet than Samsung's £540 / $700 Odyssey G7. A large part of that is likely down to the AOC's choice of panel, which uses a flat TN screen instead of Samsung's curved, VA-based Quantum Dot technology. The Odyssey G7 also has a slightly higher HDR rating than its AOC rival, meeting VESA's DisplayHDR 600 specification instead of the entry-level DisplayHDR 400 standard.

I haven't tested Samsung's Odyssey G7 yet to see how it compares, but there are several things about the AOC that make a great first impression considering its lower price. For example, its TN panel has excellent colour accuracy, covering a near-perfect 99.3% of the sRGB colour gamut straight out of the box on its default settings (that's its Standard Eco mode preset, Warm colour temperature setting and its Gamma 1 option, in case you're wondering). That's pretty darn rare for a TN panel, and is just as good as, if not better than, what you'd expect to see on more expensive IPS and VA displays. 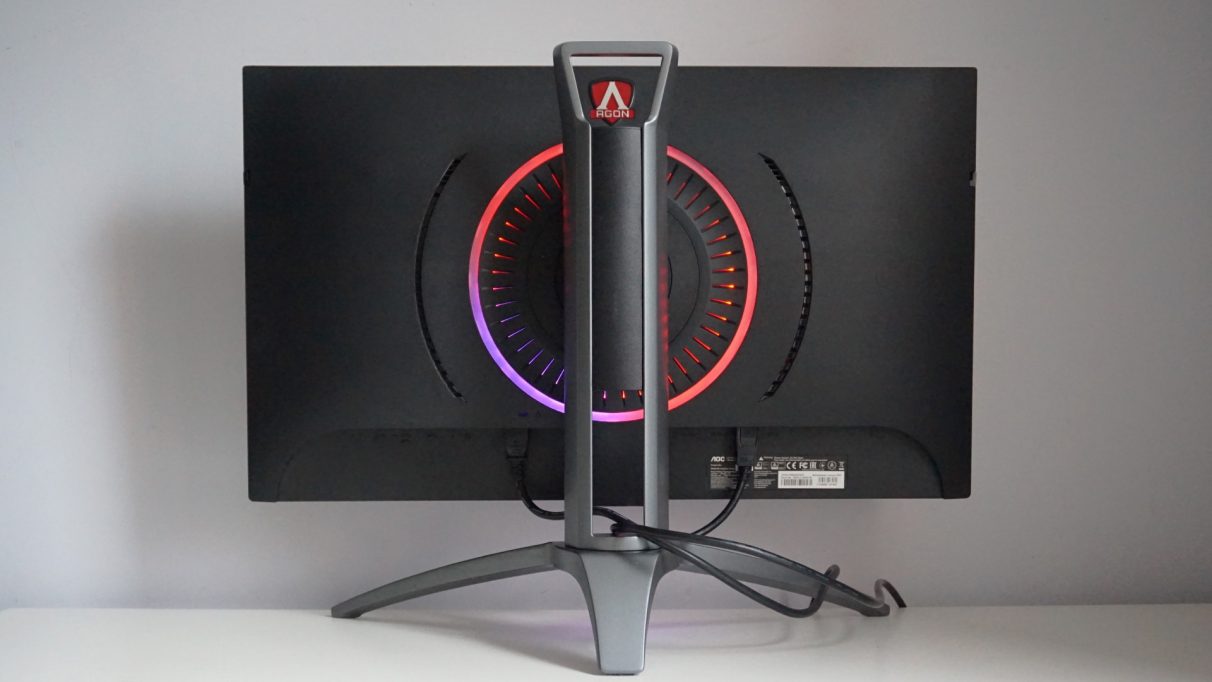 The AG273QZ's DCI-P3 coverage was pretty good, too, covering 85.4% out of the box. The DCI-P3 gamut is what's used to measure a monitor's HDR chops, and while 85.4% isn't the highest figure I've seen (indeed, VESA's DisplayHDR 400 specification doesn't actually require a monitor to have a particular gamut coverage in this respect), it's still pretty decent all things considered. Even the very best HDR displays only have to hit at least 90% of the DCI-P3 gamut to meet VESA's more advanced DisplayHDR requirements, so 85% is still pretty good going.

It's also very bright, hitting a peak white level of around 460cd/m2. That's more than enough for everyday use. Indeed, in low lighting conditions, I found that setting its brightness to just 10 (out of 100) was plenty - anything more would strain my eyes. I do wish it went a little dimmer, all told, but at least there's a low blue light mode built into the monitor's onboard menu system to help prevent your eyes from getting too overwhelmed at higher brightness levels.

That said, even a peak brightness level of 460cd/m2 isn't really enough to make much of an impact when it comes to switching on the screen's HDR support. Admittedly, this is often the case with VESA DisplayHDR 400 monitors, as there are plenty of non-HDR monitors that can also hit similar brightness levels. Indeed, when I booted up Assassin's Creed Odyssey, my go-to HDR game, I could barely tell the difference between its HDR and non-HDR settings. The game looked equally bright to my eyes, so this isn't a monitor I'd recommend for a stonking HDR experience. To appreciate the full whack of what HDR can offer, you really need a monitor that's even brighter, and I'd probably consider VESA's DisplayHDR 600 standard to be the absolute minimum you should be aiming for here.

Alas, despite the AG273QZ's excellent colour accuracy, there were other aspects of the display that left much to be desired. It had quite a high black level, for starters, coming in at 0.65cd/m2, according to my X-Rite DisplayPro i1 colour calibrator, although I did manage to get this down to a more agreeable 0.50cd/m2 with a bit of fiddling. It wasn't so bad that blacks end up looking noticeably grey, per se, but there was a noticeable red tinge to them on its default settings. Combined with its poor contrast ratio of just 704:1, and this often made shadow areas very hazy and indistinct, making it difficult to discern a lot of detail in darker game scenes.

I was able to make the screen look darker and less red by switching over to its sRGB colour temperature setting and downgrading its Shadow Control option form 50 to 40, but this actually resulted in an even worse contrast ratio - just 491:1. Thankfully, its colour accuracy, brightness and its black level stayed about the same on these new settings, but try as I might, I couldn't find any way to improve the monitor's contrast.

Making these changes also didn't resolve my other main issue with the AG273QZ, and that's its poor handling of text and word documents. While my desktop looked pleasingly sharp thanks to the bump in resolution, the monitor's low contrast ratio still made text difficult to read against a pure white background. It was almost like I was reading off a 1920x1080 display again, which rather defeats the point of getting a screen that can do 2560x1440. 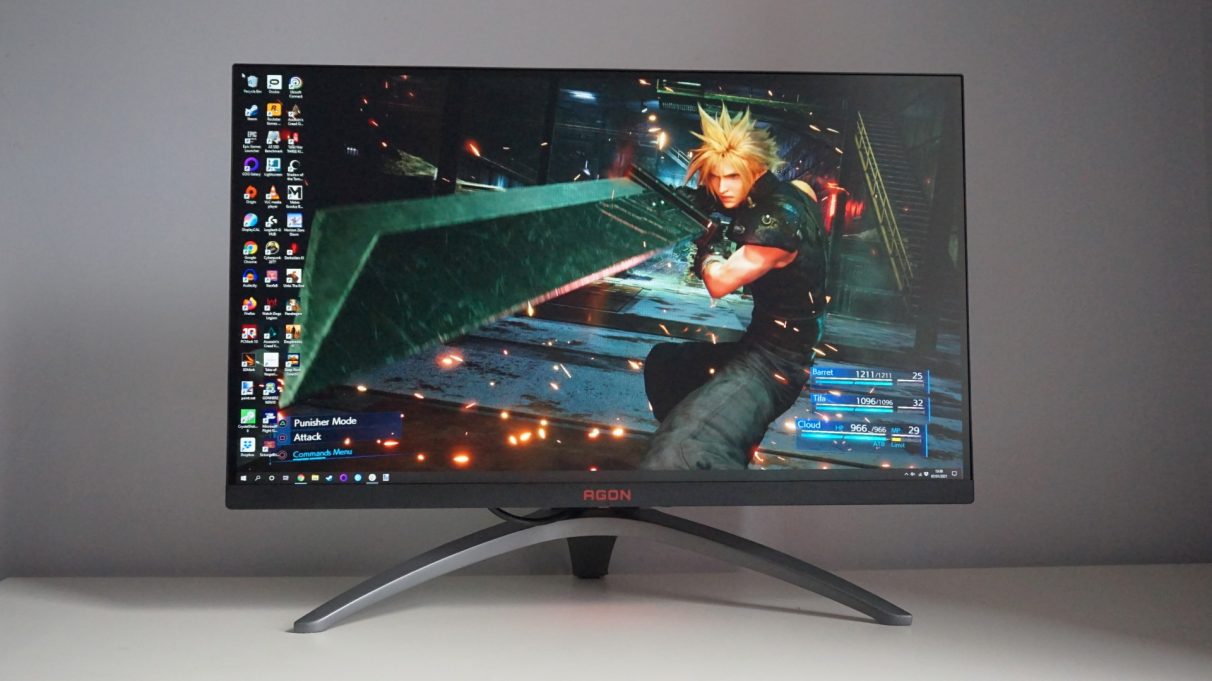 As on those 1080p screens, this readability issue was less obvious when playing games. HUD and menu text stood out perfectly well when presented against a colourful background, and was easy to read at a normal viewing distance. And that's fine if you're buying a 240Hz screen that's going to be used purely for playing games. But as I said at the start of this review, the main attraction of these 1440p, 240Hz displays is that they should be a better fit for work and play alike. Alas, I can't say that's particularly true of the Agon AG273QZ, which puts quite a big dampener on it.

The AG273QZ is a perfectly good gaming screen, combining a high refresh rate with great colour accuracy, but its poor contrast ratio means you just don't get the full benefit of its higher resolution. In truth, you'd be better off getting a cheaper 1080p, 240Hz gaming display like AOC's C27G2ZU (currently my top 240Hz monitor recommendation) instead of this, or indeed opt for AOC's superior (and very similarly-named) Agon AG273QX if you're determined to stick with a 1440p resolution. The AG273QX only has a 165Hz refresh rate, all told, but that's still more than enough headroom for high refresh rate gaming in my eyes, and its just as accurate VA panel also has infinitely better contrast, viewing angles and black levels.