HDR on PC (or high dynamic range) is all well and good when it actually works, but let's face it, no one wants to shell out north of £2000 / $2000 on one of Nvidia's fancy G-Sync HDR monitors like the Acer Predator X27 or Asus ROG Swift PG27UQ when it's still so damn fiddly to get right. Admittedly, things aren't any simpler over on the AMD side of the HDR pool either, with the GPU giant's FreeSync 2 tech offering an even woollier approach to nailing down a decent HDR experience.

The advantage of going down the AMD route, however, is that you've not only a wider pick of monitors to choose from, but they're also a heck of a lot cheaper, with the AOC Agon AG322QC4 on test today costing literally a quarter of what you'd be forking out for one of Nvidia's screens. Is AOC's curvy, 31.5in, 144Hz, 2560x1440 monitor made of sterner best gaming monitor stuff than its flat, 27in, 4K, 144Hz competition? Let's find out.

It goes without saying, of course, that in order to make the most of this £415 / $550 FreeSync 2 monitor, you'll need an AMD graphics card. You'll find a complete list of FreeSync 2-compatible GPUs over in my What graphics card do I need for HDR? round-up, but for the purposes of this review, my PC was equipped with Sapphire's Radeon RX Vega 64 Nitro+ card.

It's also worth noting that you'll have to use one of the AG322QC4's two HDMI 2.0 inputs in order to enable HDR, as the pair of DisplayPorts on offer rather annoyingly only support the regular DP 1.2 standard instead of the HDR-ified DP 1.4. Still, I can't begrudge it when there are so many other ports on offer here (including a two-port USB3 hub, a VGA input and a headphone output, the latter of which can be neatly hung on the monitor's built-in, extendable headphone hook round the back), and it even comes bundled with an HDMI cable in the box, which is more than can be said for some other monitors these days.

Once it was all setup, the AG322QC4 makes for quite the imposing gaming screen. Measuring 31.5in across its gently curved diagonal, this 2560x1440, 144Hz VA panel takes up quite a significant portion of your overall peripheral vision. The curve didn't make a huge amount of difference to my overall sense of immersion, all told - probably because its relatively compact stand allowed me to shunt it further back on my desk than other curved screens I've tested in the past - but you can always inch it closer to make it feel like its FreeSync 2 magic is wrapping round your entire face.

FreeSync 2, you may remember, is an extension of AMD's already-existing adaptive frame rate technology, FreeSync. It's essentially exactly the same thing as regular FreeSync (which gives you low latency, tear-free gaming among other benefits), only with added HDR support. Initially, AMD said that FreeSync 2 monitors would be held to a higher standard than regular FreeSync monitors, and that only the very best screens would ever be classed as FreeSync 2.

The only problem is that, unlike Nvidia's clearly-defined G-Sync HDR standard, AMD haven't actually confirmed what a monitor has to do in order to win that coveted FreeSync 2 badge. Instead, we have to look to another standard, this time from VESA, to help make sense of it all (which is exactly what you want to make things absolutely crystal clear for your typical consumer).

The AG322QC4, for instance, is also certified as meeting the VESA DisplayHDR 400 standard. This is the lowest VESA standard (the others being 600 and 1000) for HDR, and essentially boils down to three things: a maximum brightness of 400cd/m2 (hence the 400), at least 95% coverage of the rec.709 colour gamut (which is what the regular sRGB gamut is based on), and a maximum black level of 0.40cd/m2 (the closer to 0.00cd/m2, the better). By comparison, the 600 and 1000-level tiers also demand 90% DCI-P3 colour gamut coverage in addition to a higher 99% sRGB, as well as lower black levels (0.10cd/m2) and, naturally, higher brightness requirements.

Clearly, then, FreeSync 2 isn't so much a 'gold standard' for HDR as it is a sign of 'vague competence'. Indeed, with VESA's standard (thankfully) now becoming much more widespread among PC gaming monitors, the DisplayHDR 400 mark is the absolute bare minimum you should be looking for when it comes to buying an HDR-capable display.

That doesn't mean that FreeSync 2 is the same as VESA's DisplayHDR 400 standard, oh nooo. That would be too easy. Instead, the only thing AMD have actually said on the matter is that a FreeSync 2 DisplayHDR 400 screen would exceed the specification required for just DisplayHDR 400. DisplayHDR 600 screens, for example, could also be classed as FreeSync 2 displays, as could DisplayHDR 1000 monitors. Presumably, the latter two would offer a lot more than what's technically required for FreeSync 2, but the point remains that the bar looks to be quite low for FreeSync 2 monitors compared to their 1000cd/m2, 90% DCI-P3 Nvidia G-Sync HDR rivals.

On paper, then, the AOC AG322QC4's HDR capabilities don't exactly sound particularly promising. After all, a high peak brightness is one of the key things that gives HDR its eye-searing wow factor, and there are plenty of other non-HDR monitors out there (SDR, or standard dynamic range screens, if you will) that can already do well in excess of 400cd/m2 brightness right off the bat.

Indeed, there's no denying the AG322QC4's brightness level is one of its biggest weaknesses. During my regular SDR tests, for example, I recorded a maximum white level of 380cd/m2 with my X-rite i1 DisplayPro calibrator. Admittedly, that's still more than enough for regular desktop use, particularly if you're sitting in direct sunlight, but when it came to testing the monitor's brightness in HDR, I only ever saw a peak of around 350cd/m2 - and that was when I plonked my DisplayPro over the white hot Grecian sun in Assassin's Creed Odyssey.

That's not brilliant if you're hankering for some proper virtual Mediterranean sunshine as the winter months start to draw in, and I was left feeling distinctly less impressed than when I watched the same scene play out on Nvidia's pair of G-Sync HDR monitors, the Acer Predator X27 and Asus PG27UQ.

That said, while the AG322QC4 might not deliver on the brightness side of HDR, I'd argue that its colour accuracy looked just as vibrant as its Nvidia rivals. In truth, it's hard to put a definitive figure on this, as my testing patterns don't produce their own HDR metadata, which is what tells the screen that, yes, this is indeed HDR content so please show it in HDR. As such, the only thing I can really judge it by is how it looks to my own eyeballs - which in this case, was pretty damn near perfect.

Going back to that Assassin's Creed Odyssey sunrise again, I saw the same warm light casts its pinky, purple glow over the mountains of Cephalonia on the AG322QC4 as I did on the Predator X27 (albeit with HDR turned on this time instead of being forced to leave it off due to the Acer's strange HDR implementation), and if you put the two screens side by side I think I'd have a hard time telling them apart.

The same goes for Final Fantasy XV and Forza Horizon 4 as well, whose colourful, vibrant worlds looked just as rich and vibrant in HDR on the AG322QC4 as they did on the Asus and Acer. So yes, the AG322QC4's brightness may not be all that, but when it comes to the colour side of HDR, this is a screen that punches well above its weight - even if, ironically, Assassin's Creed Odyssey's specific FreeSync 2 HDR support doesn't look nearly as good as using its regular old HDR settings. Final Fantasy XV and Forza Horizon 4, by comparison, don't have special FreeSync 2 support and just worked from the get go once I'd made a couple of very minor adjustments to its in-game brightness sliders.

The AG322QC4 impressed as a regular SDR screen for plain old desktop duty as well - once I'd got my head around AOC's improved, but still rather fussy onboard menu system. On its default settings, for example, my i1 DisplayPro showed the AG322QC4's VA panel was already displaying a very respectable 95.2% of the sRGB colour gamut, and 69% of the wider DCI-P3 colour gamut, which is used as a measure for those aforementioned premium HDR screens (including Ultra HD Premium TVs).

That's pretty good for straight out of the box, and I wasn't able to get much more out of it during calibration, either, so you can pretty much use it as is and still get a great picture. When I switched over to the User colour temperature profile (keeping its Eco mode on Standard and its various gaming modes switched off), for example, I managed to nudge those figures up to 96.5% and 70.1% respectively, but in practice the difference was practically negligible. Switching on the monitor's DCB (dynamic colour boost) mode to Full Enhance made a more noticeable impact, instantly making my desktop appear much more vibrant, but even then you're only looking at figures of 96.9% and 72.7%. 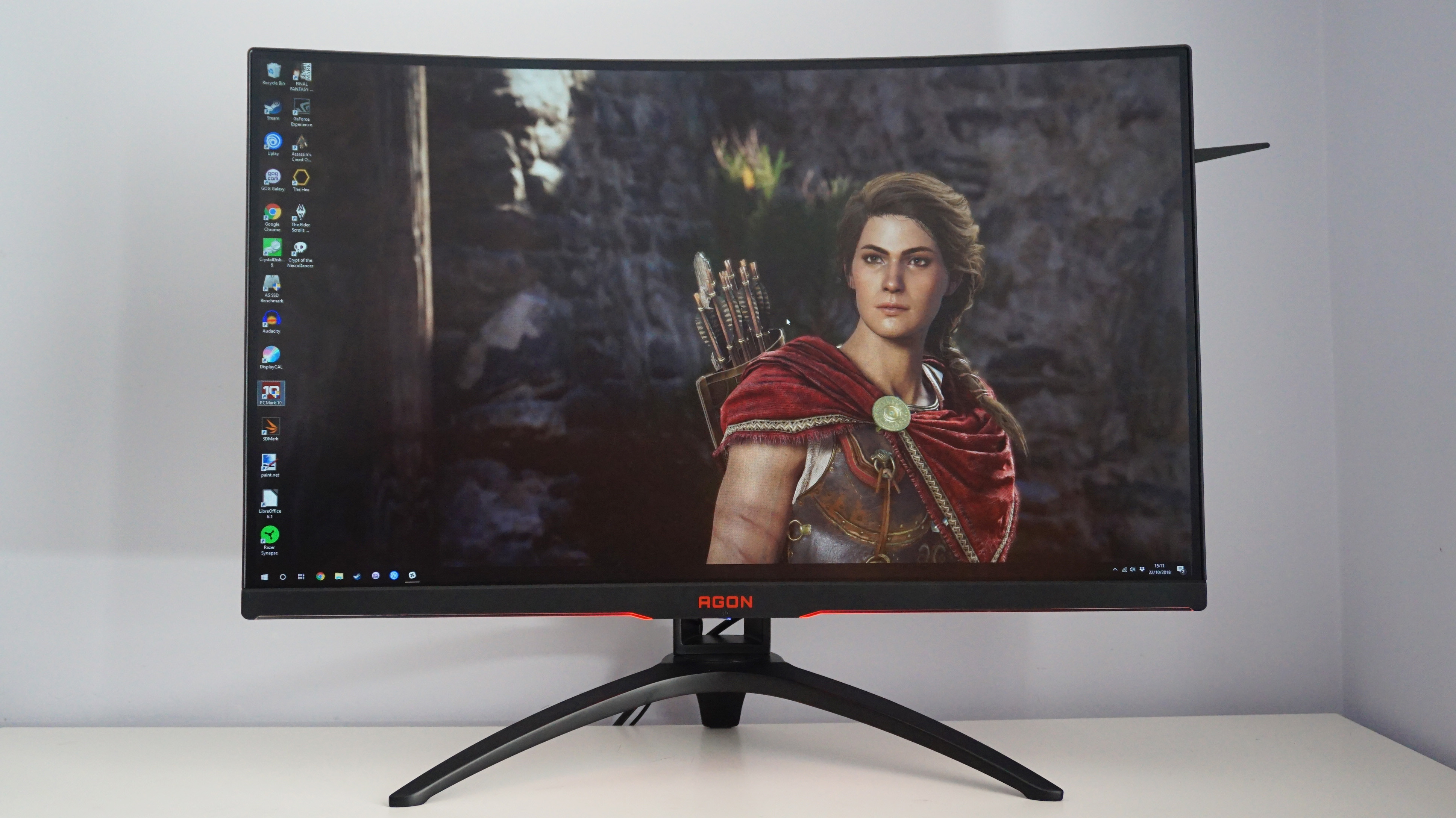 Sure, there are other monitors that give you a couple of extra per cent of sRGB coverage, such as the similarly-priced and similarly-specced, non-HDR Acer XF270HUA, but few manage to combine this kind of coverage with such an excellent contrast ratio of 2726:1 and a black level of just 0.14cd/m2. With figures like these, the AG322QC4 really stands apart from other 1440p 144Hz screens you'll find in this sort of £400-500 / $500-600 price range, and that's before you start throwing HDR into the mix as well.

I do wish AOC would make its onboard menu system easier to use, though. Despite opting for a far more convenient five-way button on the monitor's lower bezel this time (or, indeed, its accompanying menu control pad) instead of a confusing row of horizontal buttons, the fact that you have to press the button in to select a particular menu screen, but then press right to explore a individual setting is just mind-bogglingly infuriating - especially when the button on my particular review sample was a bit wobbly and insecure in the first place, so even if I thought I'd pressed it inwards, it actually ended up doing something else. Just make it one or the other and have done with it.

I also wouldn't recommend using its three preset gamer modes (FPS, RTS and Racing), as these locked off several settings, including the colour temperature options, and looked worse for it. The Shadow Control feature might come in use if you're playing something particularly gloomy and don't want to be scared out of your wits when something jumps out of the shadows at you, but otherwise I'd say you're better off leaving its 'game settings' well alone.

Fussy menu aside, though, the AOC AGON AG322QC4 is nevertheless a fine FreeSync 2 monitor. Despite its modest HDR specifications, this £415 / $550 screen is more than capable of matching monitors four times its price when it comes to overall HDR colour reproduction, and while it may not wow you with its maximum brightness, it still offers a perceptible upgrade in visual quality over its non-HDR competitors. Likewise, even if you're not in the market for an HDR gaming monitor, the AG322QC4's excellent contrast ratio, deep blacks and wide range of ports make it a tough act to beat at this price, making it a strong pick for HDR and non-HDR PC peeps alike. If you own an AMD graphics card and want to give your gaming library a bit of a boost in the old image department without spending an absolute fortune, the AOC Agon AG322QC4 won't disappoint.