Many of the attachments in Apex Legends have several variants, each of which differ in colour and quality. White attachments are the least valuable, superceded by blue attachments, then purple, and finally gold. As with games such as Fortnite, there's never any reason to not to upgrade an attachment to an identical attachment of higher quality. 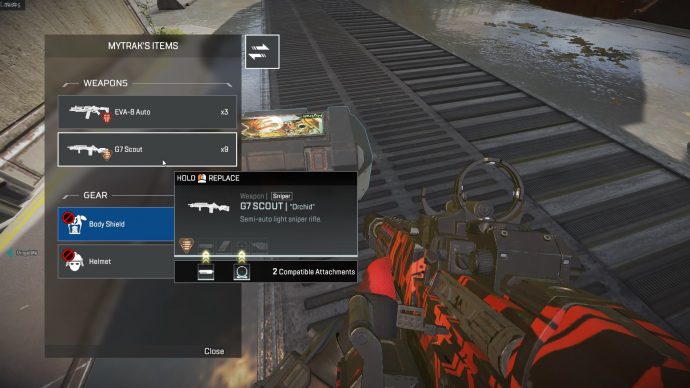 Certain attachments, such as the Digital Threat scopes, are only ever found in gold colours. Certain others such as magazines and stocks do have golden equivalents, but these are only found as part of a "fully-kitted" gold weapon (the kind usually - but not exclusively - found in the Hot Zone of each match) and are identical in function and stats to their purple equivalents. The only exception to this is the Gold Barrel Stabiliser, which provides even greater recoil reduction than purple, and reduces the flash on your gun.

All the attachments in Apex Legends are broken up into five different categories, and you can only fit an attachment on a gun if that gun has the correct type of attachment slot available. For more information on the different attachment slots that each weapon has, take a look at our detailed Apex Legends guns & weapons guide. All attachment types have different benefits, but as a general guideline this is our order of most valuable, from highest to lowest (though they're all still useful):

Now, let's take a look at each of the attachments and what they can do for your weaponry and killing potential. I've marked as bold the new Season 7 attachments so you can see exactly what all the fuss is about with these powerful new augmentations.

Hop-Ups are special attachments which are only accommodated by a select few weapons. Each individual Hop-Up has a specific gun or small selection of guns to which it can be applied, so you can't fit any Hop-Up into any Hop-Up attachment slot; it has to be the right weapon for that specific Hop-Up. But they often grant an excellent benefit for their weapon of choice, and as such they are rare finds available only in purple or gold colours.

The gold optics are unique in that they provide Threat Highlighting, which highlights enemies in red, allowing you to see them more clearly through smoke or from a distance.

The primary benefit of most Mag attachments in Apex Legends is to increase your magazine size so you can fire more bullets before having to reload. But the rarer types also provide a decrease to your weapon's reload time.

Barrel attachments are purely for reducing recoil on your weapons, and thus are best suited for fast-firing, high-recoil guns such as LMGs, SMGs, and Assault Rifles. The Barrel Stabiliser is also the only non-Hop-Up, non-Optic attachment with a gold variant that differs in function from purple, and the only such gold attachment that can be found on its own rather than as a package deal in one of the "fully-kitted" gold weapons.

Bolt attachments are purely for Shotguns, and significantly increase the fire rate of the gun - making a good Bolt the top priority for kitting out your shotgun.

Stock attachments reduce the draw time of your weapon, and also helps to reduce the amount of aim drift you receive while aiming down sights - that is, the way your aim will automatically sway on its own in order to make hitting your target more challenging.

And there you have it! You've just been through every attachment it is possible to find in Apex Legends. Keep referring back to this page for all the most up-to-date info on the myriad attachments in this massive battle royale hit. Until then, see you on the battlefield.