If you click on a link and make a purchase we may receive a small commission. Read our editorial policy.
Developer: Respawn Entertainment
Publisher: Electronic ArtsRelease: February 4, 2019
On: Windows
From: Origin
For: Absolutely nothing

Apex Legends is a dumb name. There. There goes the hat of criticism, back into its box. On goes the hat of unreserved praise. That name is just about the only foot the Titanfall devs have set wrong here, and I expect to be stretching my Apelegs every evening for the foreseeable future.

This is the best battle royale game we’re going to see for a long, long time. So much so that we've even include it in our round-up of the best free PC games.

If you've been hiding under a rock, then you might already have a good strategy for battle royale success. You also might not know that battle royale games are last-man-standing murderfests where combatants battle in a gradually shrinking arena, whacking away at each other with kit they find on the floor. Each Apelegs match has 60 players, always grouped into teams of three.

Oh, what to celebrate first? The movement? The bumslides? The ping system, which transforms silent strangers into bastions of cooperation that make me dread the idea of launching any other multiplayer game? The respawns? The diversity? The chirpy robot with a goddamn *claps, spins round, generally dances* grappling hook?

Yes. Him. Every eight seconds, the Pathfinder gets to swing up to a nearby building, or across ground that takes his miserably land-bound teammates five times as long to cover. That grapple is his regular ability, which each champion packs alongside a passive and an ultimate. 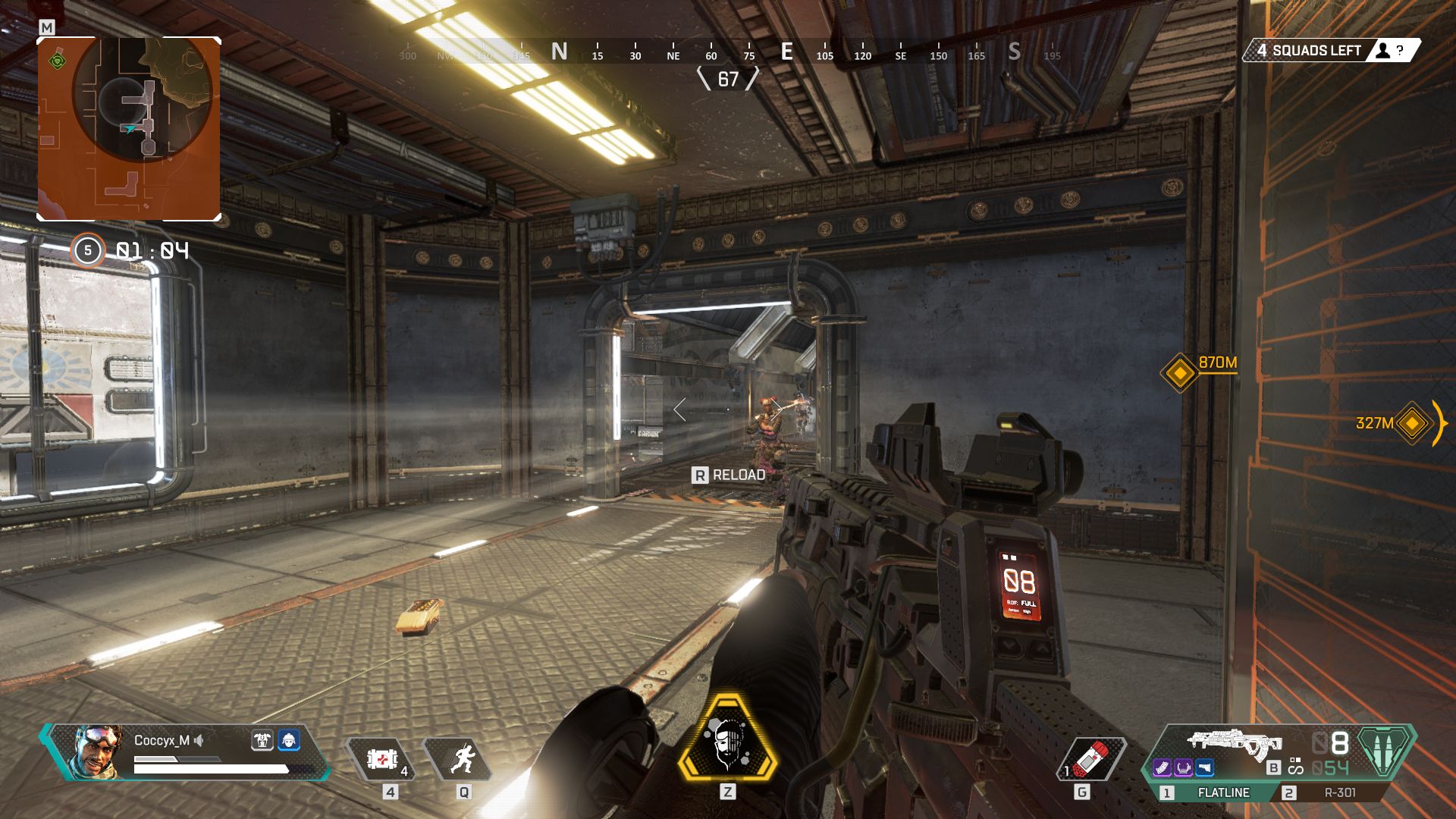 It's one of my favourite picks from a toybox that's got something for everyone. Bangalore brings smoke grenades and artillery, Lifeline a drone that heals up allies. But through those robo-eyes, I get to see the map from a different perspective, an adventure playground where I can ambush people from the skies. I got the final kill in a match doing that, once. It's the best feeling in videogames.

The Pathfinder isn't even my proper fave. That would be Mirage: a cocky, bumbling fool who likes to get the better of people with decoys and mind games. He's basically who I would be if I had access to holograms.

His toolset harks back to the skulduggery I remember in Team Fortress 2, when I'd exclusively play the Spy. Combat ebbs and flows around the threats each champion brings to the table, a tactical layer over fluid movement that already imbues fights with a depth that other royales lack. It's the kind of fighting that's right up my alley - tricksy and mobile, intricate and tactical. 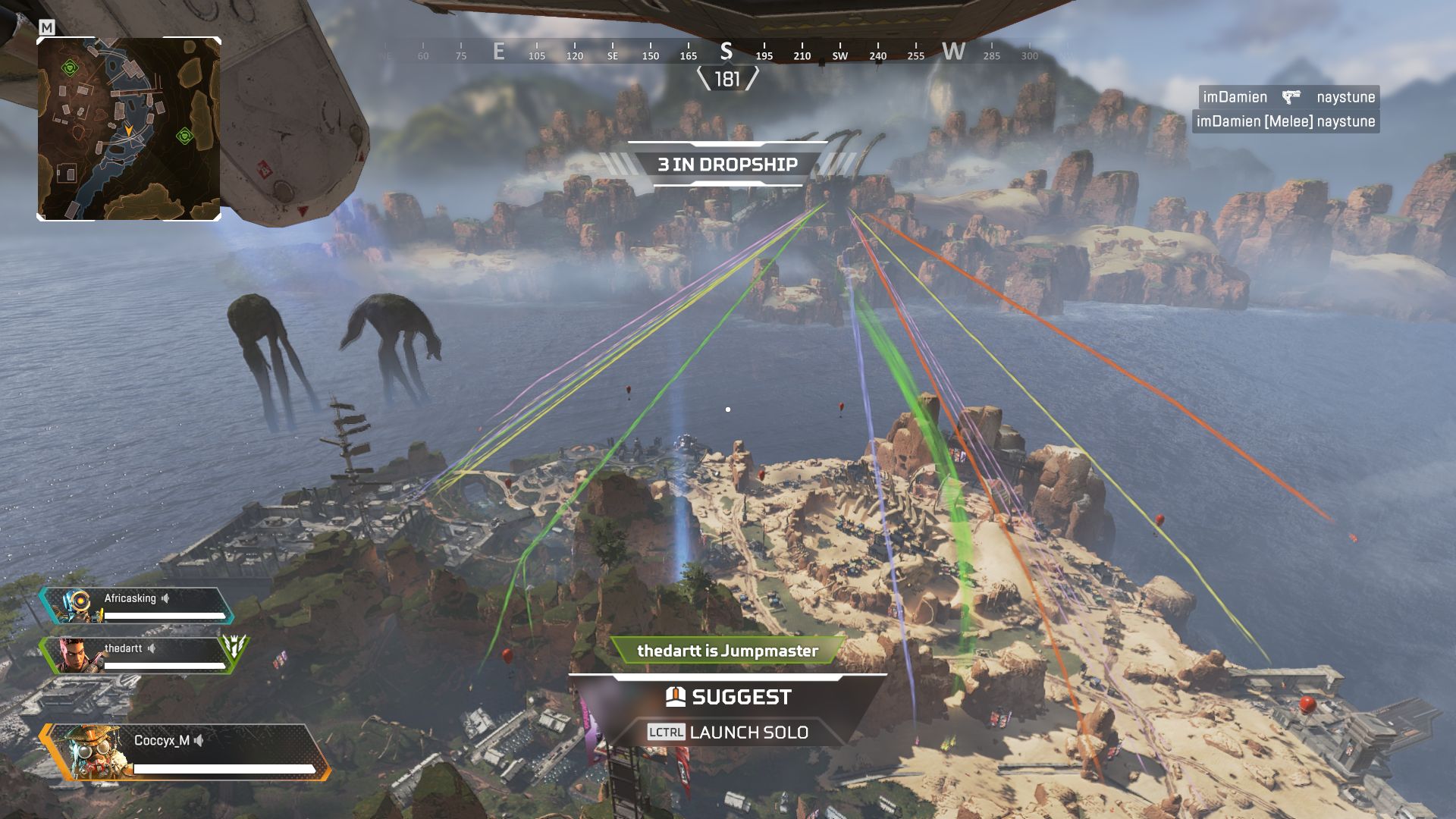 We're getting breathless. Let's slow down, even though that's anathema to Apelegs. While the wall-running and double jumps of Apex's predecessors are gone, each character can still scramble up a generous amount of wall. It makes every ponderous clamber in PUBG look worthy of a geriatric. Climbing is almost as fast as running, all round an environment set up to give an edge to whoever can use it most creatively. You dance around, you and your enemies, a landscape where every angle becomes a possible avenue of attack.

I stopped battling royalely, pretty much, because I got fed up of matches ending in a heartbeat. I'd loot, I'd run, I'd get killed out of nowhere. The abilities and escape routes here let me survive situations I otherwise wouldn't, but Apelegs also tackles that problem by simply giving everybody more health. It's true, some tension leaks out when doom looms further than a headshot away. But that's a trade I'd take a thousand times over when (nearly) every death comes with a cry of "if only I'd done that!", rather than a howl at an uncaring void. Or a streamer with a sniper rifle.

If that was all there was to Apex, I'd be happy. I'd still have my marriage of Overwatch and Plunkbat, my creative arena where unique ability-sets give each player their moment in the spotlight. I'd still have that memory of when I placed two tele-portals as Wraith, setting my team up for an ambush that turned disaster into triumph. I'd still get to crow about my Mirage plays, cackling as I flank around opponents who I've sent chasing after holograms. 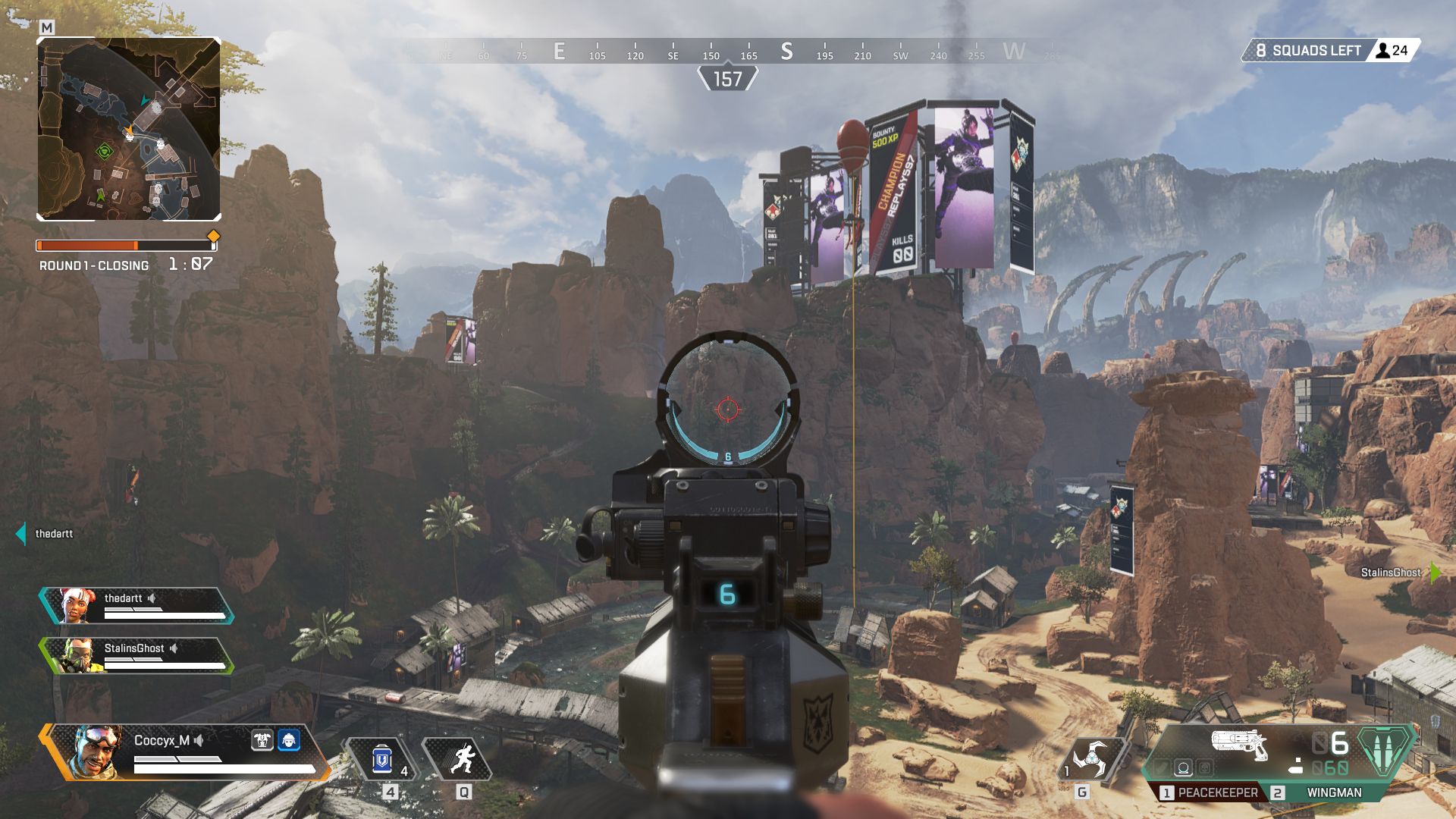 But Apex goes so much further, reaching into every corner of a well-trodden formula and lavishing it with saucy new ideas. When you leap out of the starting plane, for instance, every squad squirts out their own trail of coloured smoke. That brings clarity to a phase that's usually a mess, and an opportunity to smartly plan your movements - if you can be bothered. You might just drop directly down onto the roving supply ship, guaranteed to be brimming in loot and opponents who want to fight you for it. Spicy starts can also be found in a randomly determined high-loot area, luring down squads with the promise of a gun that comes ready stocked with top-tier attachments.

There's always something to do, something to aim for. New ships trickle into the map each game, swooping in to hover over areas where they lay down zipwires that invite everyone to a murder party in the sky. Those are independent to the supply drops, which have a chance to contain super-rare guns that come with their own unreplenishable ammo source.

Those drops are nearly always within reach of the determined, thanks to zipwires that criss-cross the map and balloons that you can zoom up to and glide from. Plus, lest we forget, every slope is an opportunity for joyful bumsliding. If you don't do that at every possible opportunity, you need to take a long hard look at your priorities. 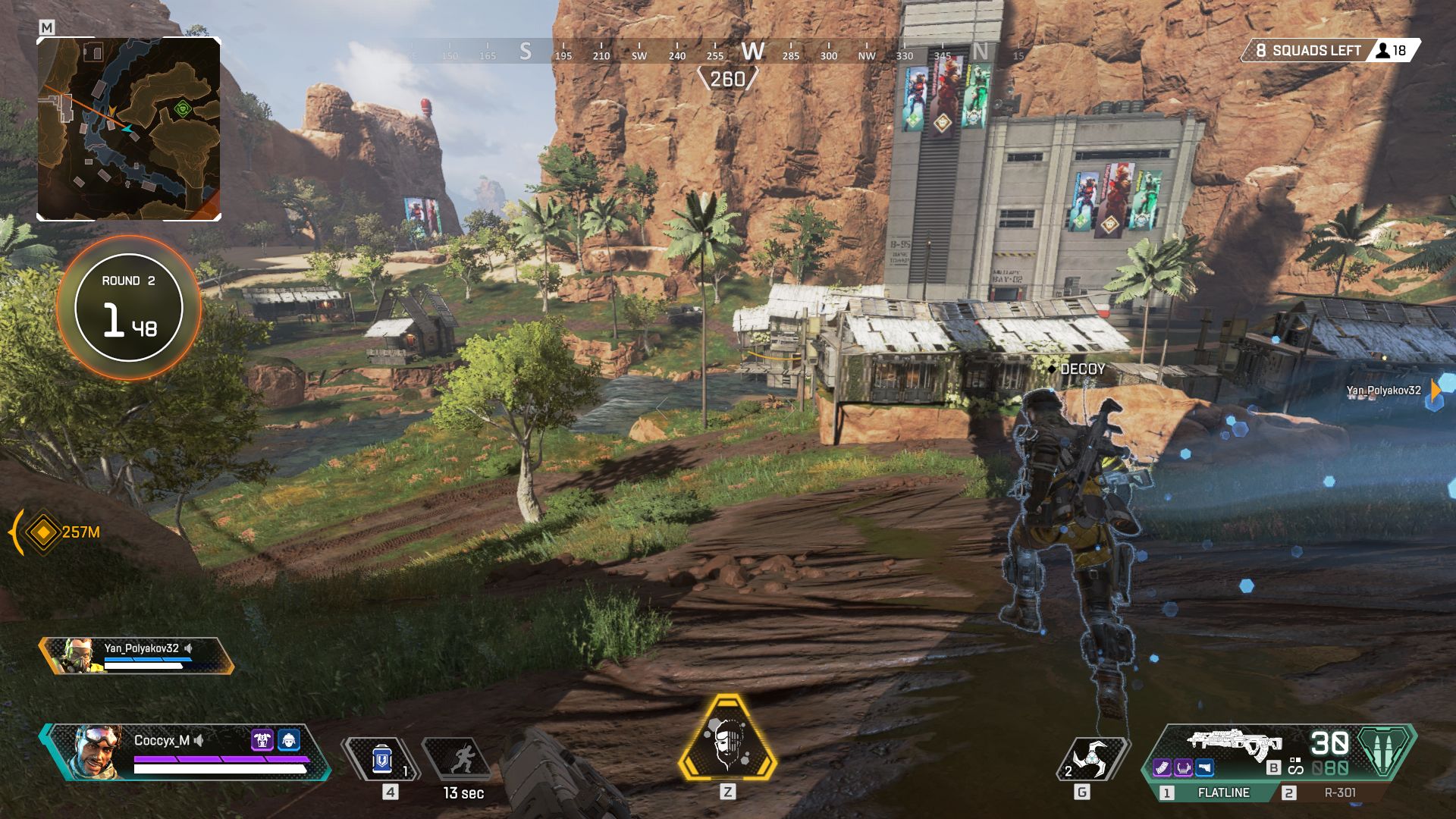 There's so much more. When you're knocked down, you get a directional shield that lets you absorb damage from the direction you're facing. You're still helpless, but you at least get some say in your survival. Brilliantly, if someone does manage to finish you off, you might not be out for good. Your surviving teammates can zap your soul into a handheld gadget, then jog over to a respawn point that plops you back into the match, albeit without any gear. I've already mentioned how abilities allow everyone to feel important during a fight, but even they can't match the high of saving the day with a heroic dash to those respawn points. I'll find it hard to go back to a battle royale game that lacks them.

That goes doubly for the pinging. It's a new benchmark in jolly cooperation, a system that sets the bar so high that I'll be shocked if every multiplayer game doesn't try to ape it. Everything you could want to communicate is a context-senstive button press away - gear requests, intentions, spotted enemies. It all works so well that I'm left with appropriately little to say. 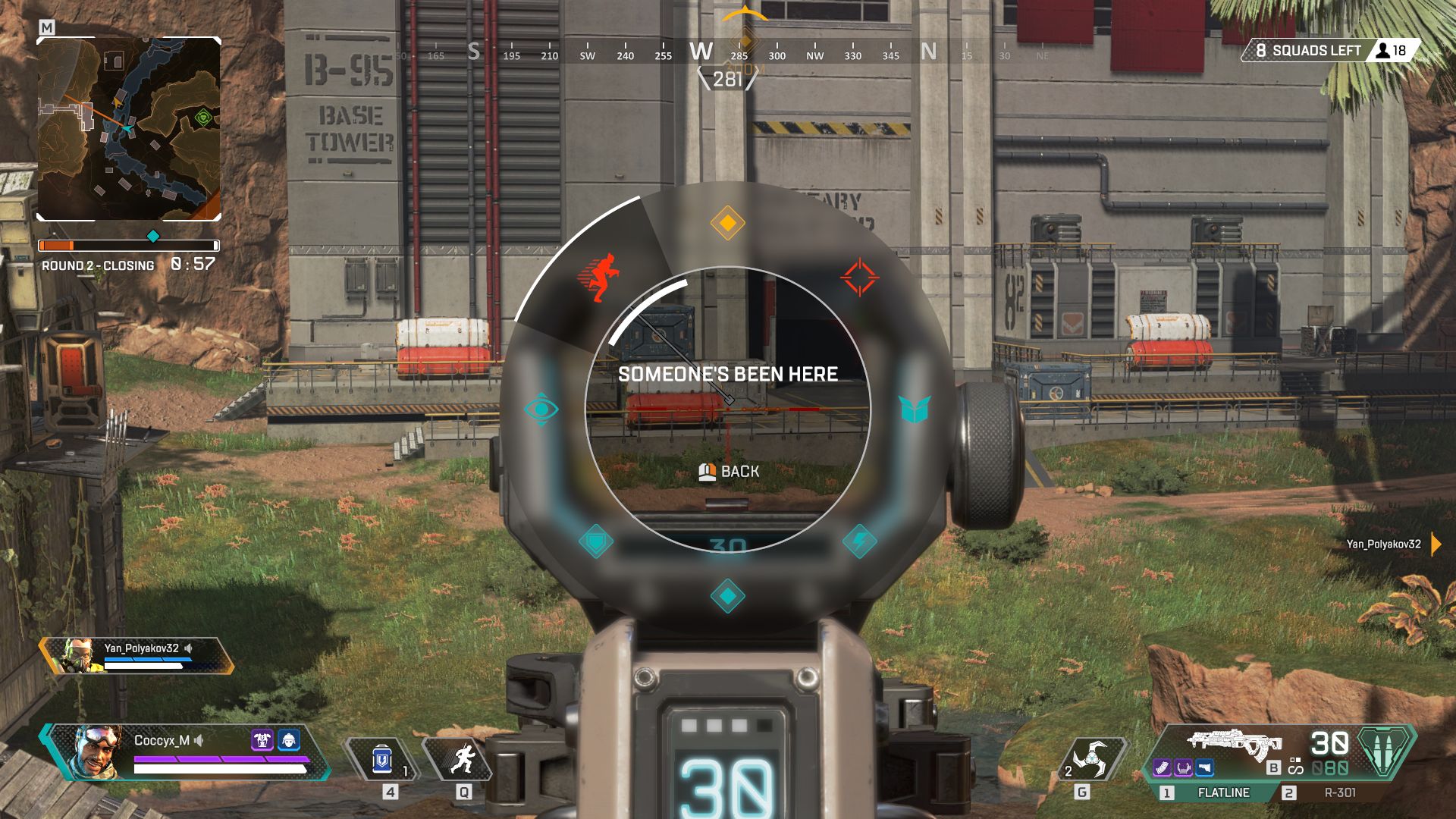 There is just one more thing. An important one. There's only a single white male character in the game, and he is a dick called Caustic who sprays toxic gas. You can't even play as him when you start, unless you choose to buy him outright rather than save up in-game cash (the only other character that applies to is Mirage, who it took me 20 hours to unlock.) If you want in on the fun, you've got no choice but to play as one of three women, a non-binary person, a gay man, or the robot. Two of the women are black.

In other words, Apelegs is exemplar in every way that matters.