Before the Su-17s showed up, the defence of Großenlüder was going like clockwork. Dug in behind wire and minefields, my Chieftains were dominating. Their poppy-brushing 120mm guns had barcoded the eastern horizon with pillars of black smoke. Nothing of Soviet manufacture had made it as far as the village, and nothing looked likely to. But then the napalm came. Tumbling canisters of molten lava delivered by low-flying, thunder-trailing Fitters. Tumbling canisters of molten lava that burst on impact, turning protective vehicle scrapes into Hadean pools of flame.

All along the front, scorched and suffocated Chieftains began quitting untenable hidey-holes. For a few minutes chaos reigned, and, probably more by accident than plan, the enemy chose this moment to commit the bulk of his MBTs. From the woods towards Lütterz a company of pine straw-sprinkled T-72s emerged watchful and hungry. The creeping line of Red armour made short work of the shaken inferno refugees. Before I knew it, my clockwork was in pieces.

Armored Brigade, a real-time wargame that invites comparisons with Combat Mission and Close Combat but is very much its own animal, is now less than a month away from a Matrix Store release (Steam and GOG releases are being considered). The preview code suggests the publishers of this gem are on the verge of delivering another Cold War winner, albeit a Cold War winner vulnerable to criticism in certain areas. 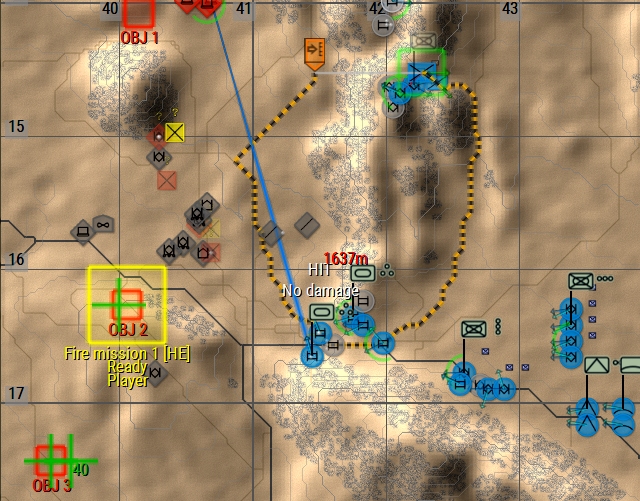 At AB's core is a peach of a battle generator with a surprising shortcoming that seems less and less significant the more I play. Unlike its free predecessor the coming incarnation can't or won't randomly-generate real estate. What it offers instead are vast, reality-based master maps (Fulda Gap, North German Plain, South-East Finland, and Fort Irwin National Training Centre. Modders are bound to supply more) from which venues are chosen. 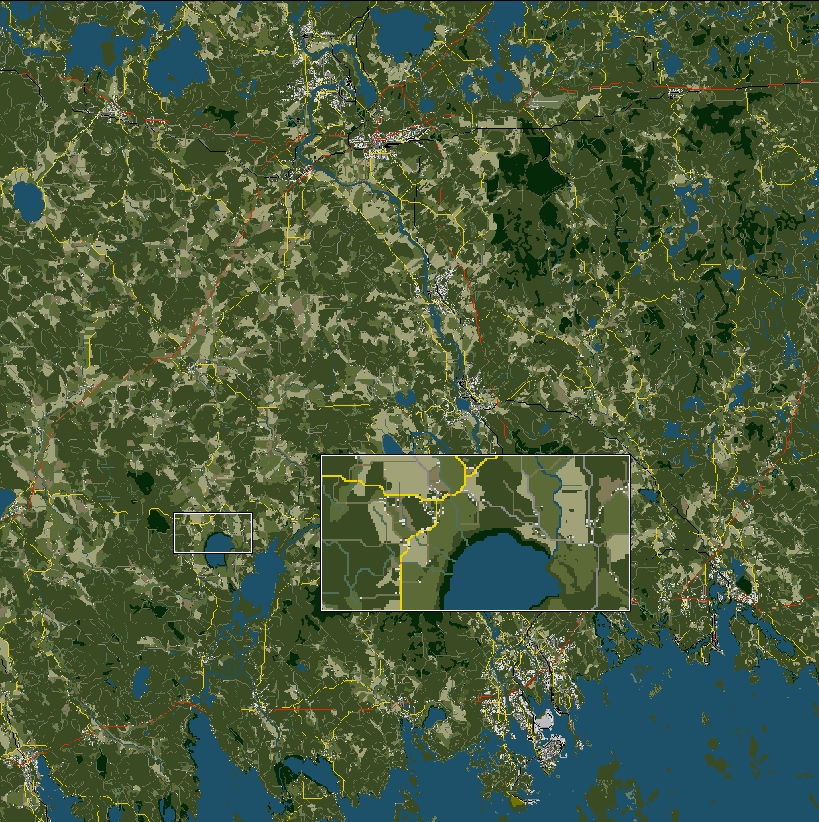 After long sight lines and uncomplicated pathfinding? Stretch the battlefield selection rectangle across that chunk of farmland over there. Fancy a claustrophobic knife-fight? Position it on that dark green area or that grey one where all the highways converge. The novel pick-your-own-slayground mechanic guarantees plausible topography and, combined with the different battle types (Defend, Advance, Meeting) and things like hand-placeable and dummy objectives (both optional), dynamic AI, and cutomisable weather, ensures distinctive ding-dongs.

An impressive unit roster encompassing seven countries (USA, USSR, UK, West Germany, East Germany, Finland and Poland) also contributes generously to combat colour. If it's tracked, wheeled, or booted and roamed about close to the Iron Curtain between 1965 and 1991 there's a very good chance you'll encounter it in-game*. The range of helicopters and CAS-capable aircraft is pretty comprehensive too. 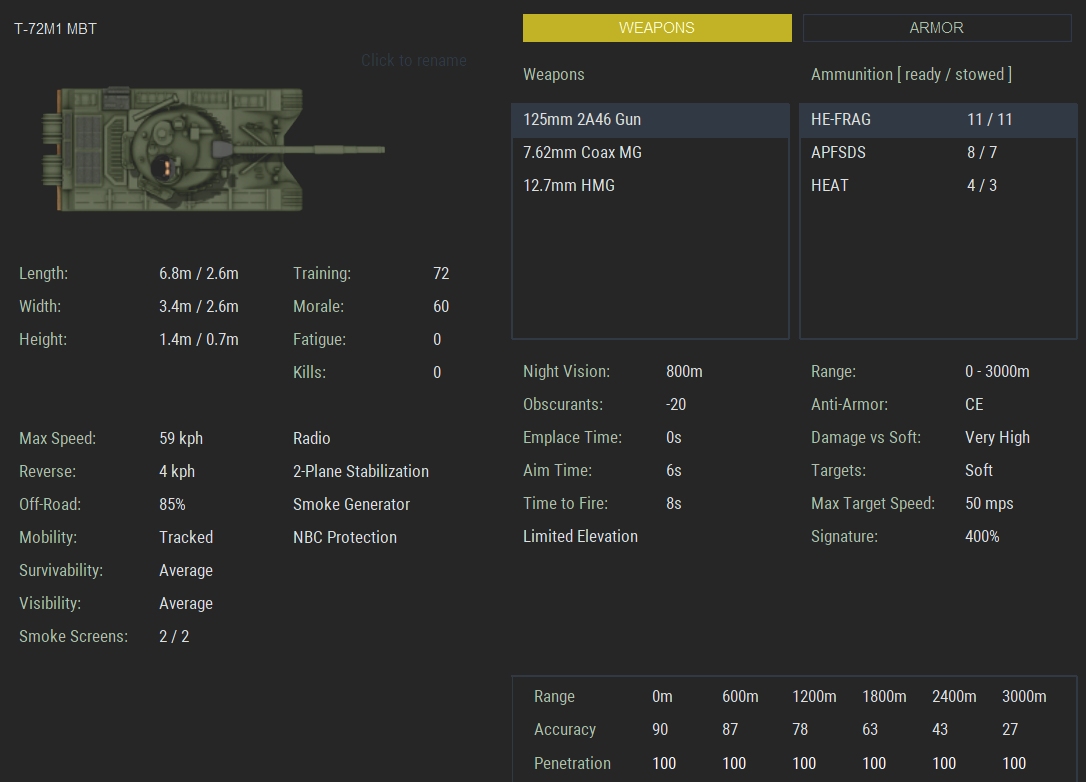 Although your camera is generally too high in the sky to make out roundels, hatches, camo patterns and the like, selected units appear in the GUI so the love and artistry that has gone into the sprites isn't completely wasted. A quick dab of a unit's info button brings up a mass of data, much of which gets pasted into algorithms the moment the vehicle or squad in question opens fire or finds itself cross-haired. 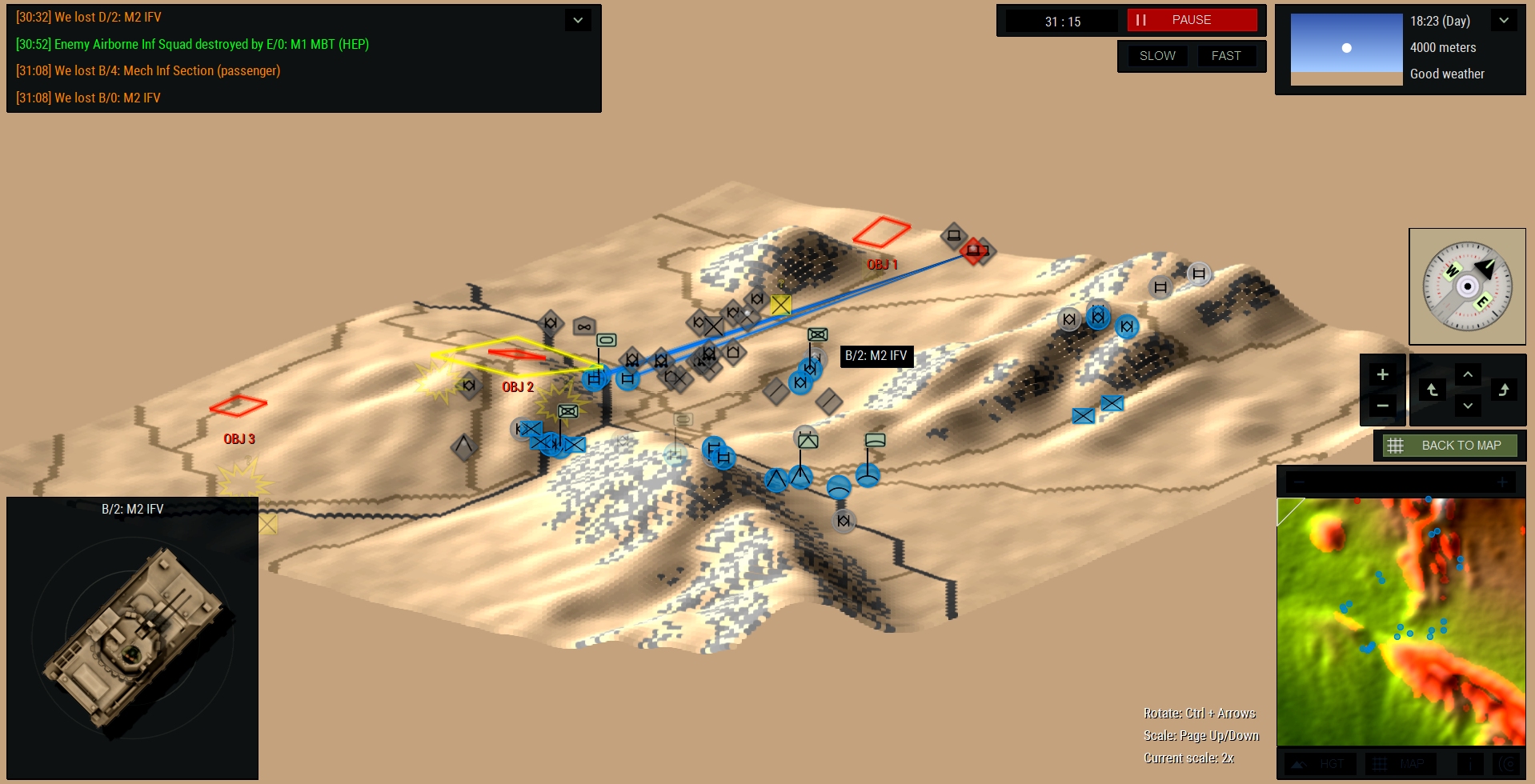 When munitions meet metal, every millimetre of steel and degree of trajectory/facing matters. AFVs have four different armour thickness stats (hull/turret front/side/rear/top) and a 'shape' variable (simple or complex) which adds a pinch of randomness to impact angles. Shells, missiles and bombs that fail to kill outright may maul. I think I'm right in saying that, except for mobility, damage is always multi-system and incremental – vehicle performance deteriorating across the board rather than flatlining in specific areas. Don't expect to see tanks with jammed turrets, out-of-commission gun stabilizers, or KIA commanders. 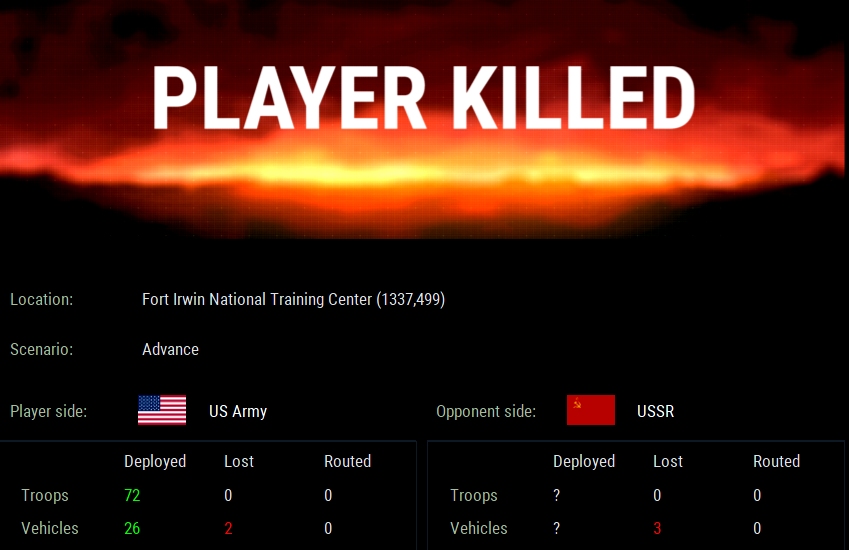 TC health might not be separately tracked, but Finnish developer Juha Kellokoski is definitely interested in leadership. Keeping HQ units close to your fracas flock is vital as it ameliorates panic and reduces the deliciously maddening command delays that accompany every order. If you choose to play with an avatar unit on the field then a single leader demise (yours) can bring a battle to an abrupt halt. 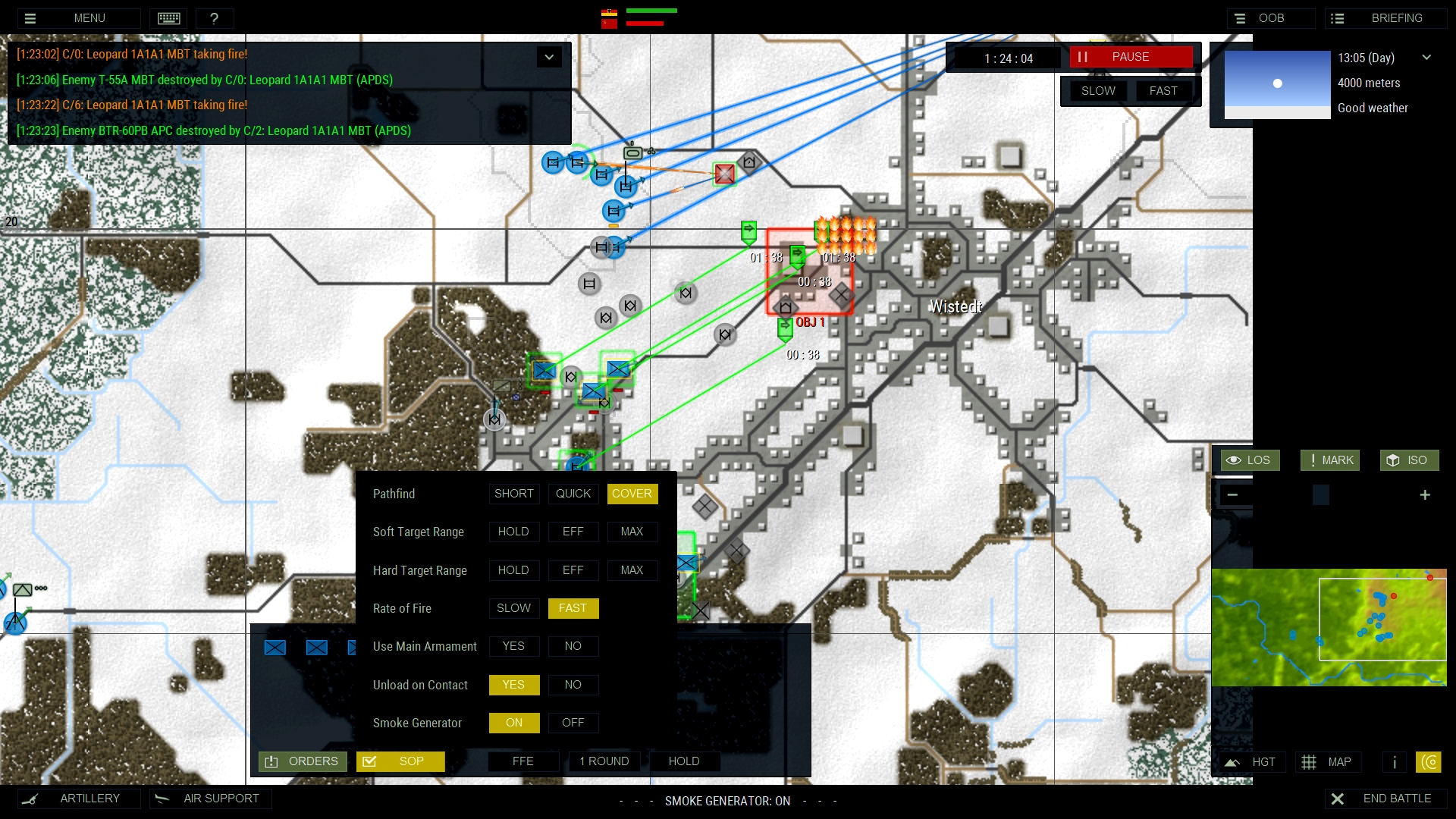 All ground units are manoeuvred with the help of Close Combat/Combat Mission-style waypoint chains nuanced with Command Ops-reminiscent behaviour modifiers. Hey, you, Simon Scimitar down by the river, I want you to REVERSE back to the junction then SCOUT southward to the railway, following a COVERED route of your own devising. Oi, Charlie Challenger in the cabbage field, be a dear and travel FAST to the bridge using the QUICKEST possible route. On arrival, ROTATE to face south-east and wait for trade, ignoring all soft targets. The second Charlie arrives at his destination* I want you, Fergus FV432, to advance to CONTACT down this lane. At the first sign of infantry UNLOAD your passengers and open-up with your MGs at maximum rate-of-fire.

There's no manual targeting or explicit assault command, but the SOP order modifiers do a pretty good job of filling the gap. The lack of a speculative fire option is more difficult to work around and may therefore prove more controversial. All orders can be issued while paused and given to configurable formations and drag-selected clusters as well as individual vehicles and infantry sections. 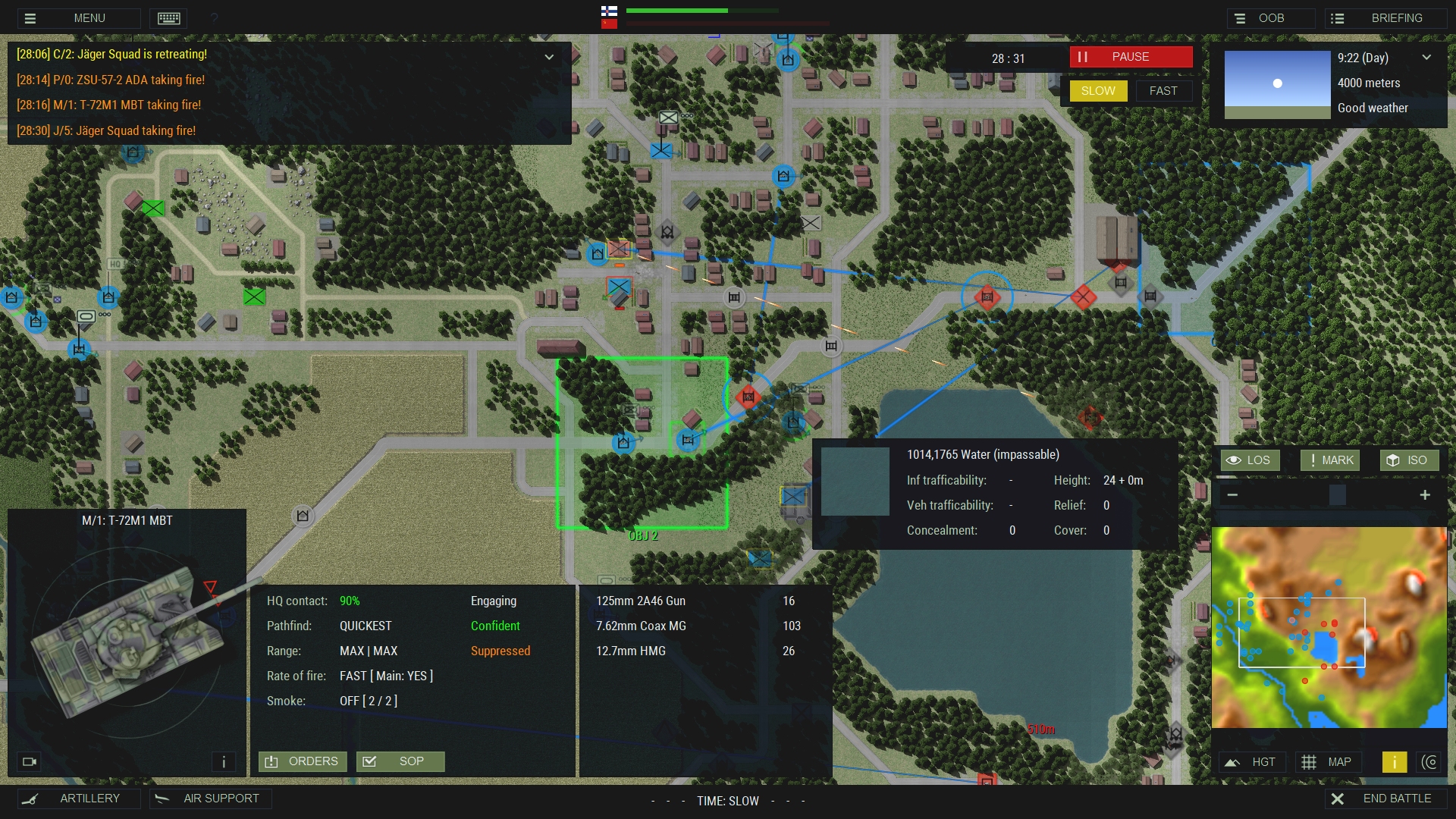 It's when you're zoomed in fussing with singletons that AB's terrain-related abstractions are most obvious. Because, counter-intuitively, 30m x 30m terrain squares can only hold one unit at a time*, and building squares are strictly out-of-bounds to vehicles even if the depicted structure appears not to occupy the entire square, urban warfare can require a little extra care and imagination. 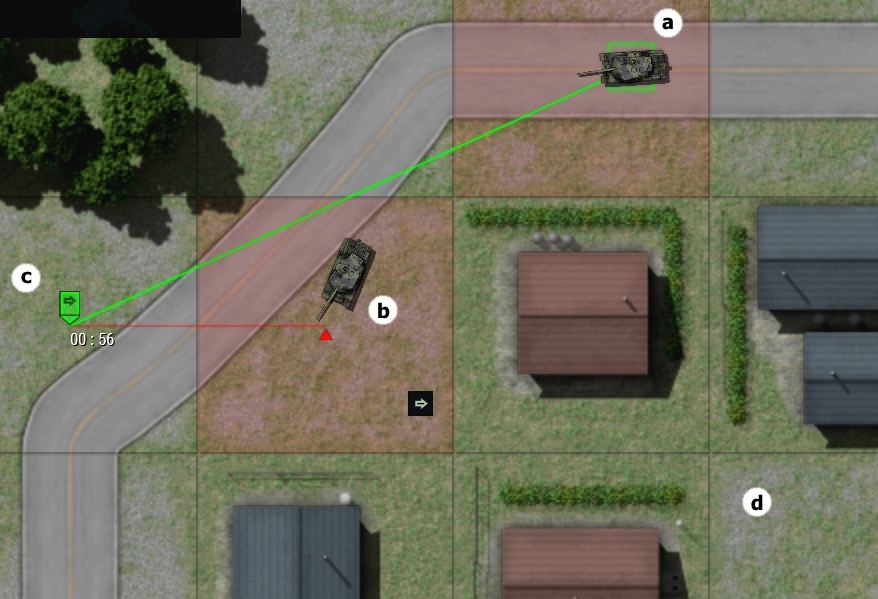 An example. The highlighted tank at (a) in the above screenshot will happily pass through the "occupied" square (b) on its way to (c) but won't accept (b) as a destination. And if I was to ask it to travel to (d) from its current position, it would shun the enticing hedge-lined alley directly south of it because, as far as it's concerned, that alley doesn't exist. 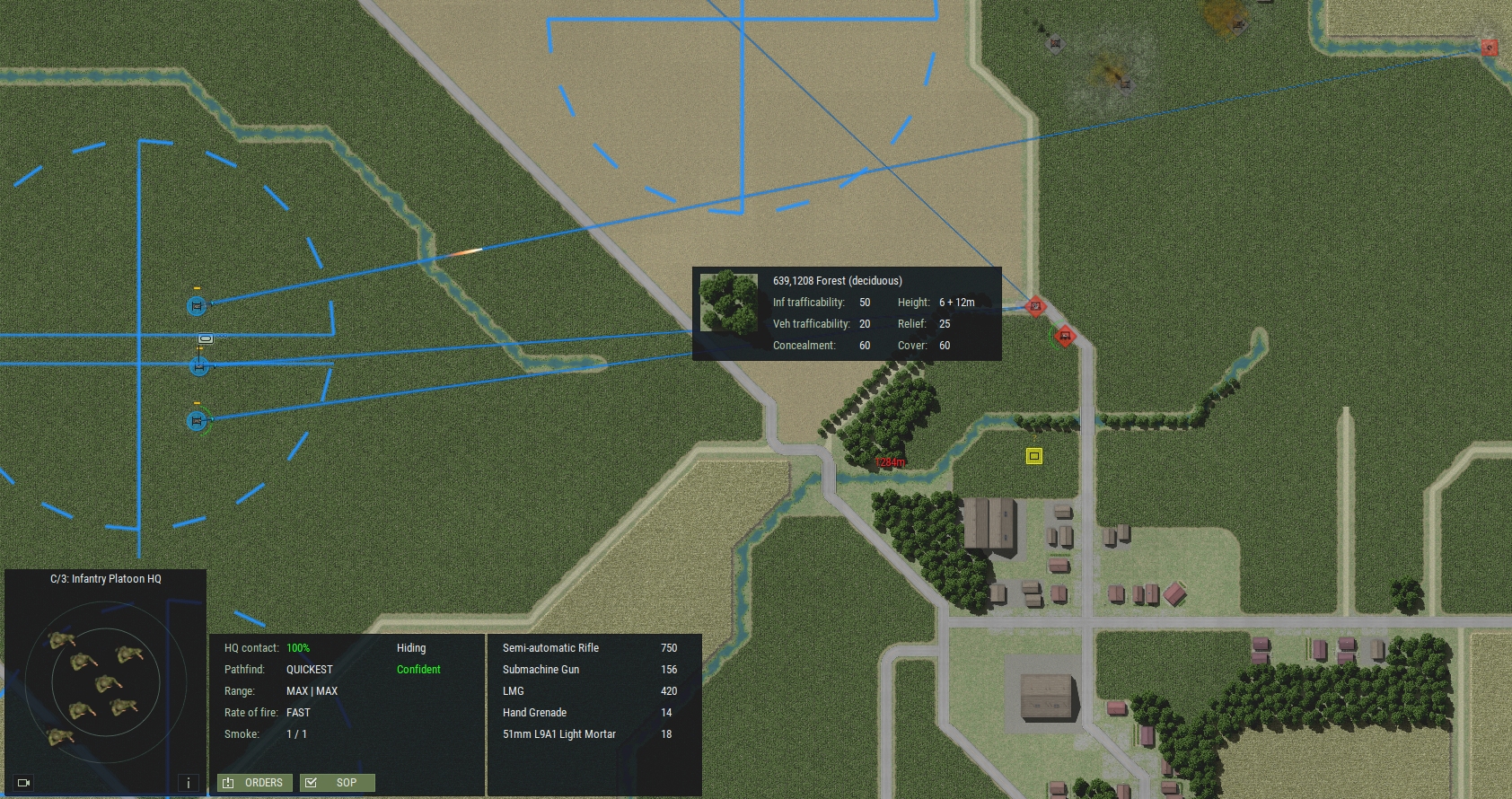 Don't be put off by the compromises. Most of the time your trundlers will be churning mud and turf rather than grinding cobbles and tarmac, and your camera will be much too high up to notice single-occupancy squares. While AB can do Combat Mission-tense 1-vs-1 tank duels (slow motion mode + individual shell sprites = sweaty moments) it's forte is regiment-scale ruckuses conducted in spacious* settings. Spend an hour finding perfect ambush spots for all of your MILAN teams with the help of the LOS tool if you like, but, honestly, lining them up along a couple of propitious forest edges might prove just as profitable in the long run.

Two excellent features that Close Combatants will eye jealously, are the isometric view and the post battle replays. I'm not sure yet whether those raised on or accustomed to alternative tactical fare will end up coveting AB's AI routines, but it's not out of the question. Fully dynamic, the game's silicon commanders are capable of identifying and avoiding dangerous map areas and seem to scout, smokescreen and soften-up reasonably competently. I gave the CPU a tough challenge in my last scrap – an attack across open ground against a fortified force – and, although it ultimately lost, it didn't disgrace itself. Any weaknesses I discover in coming days will be described in a future Flare Path and should be easy to mask with the help of the battle generator's numerous advantage/disadvantage-bestowing sliders and buttons. 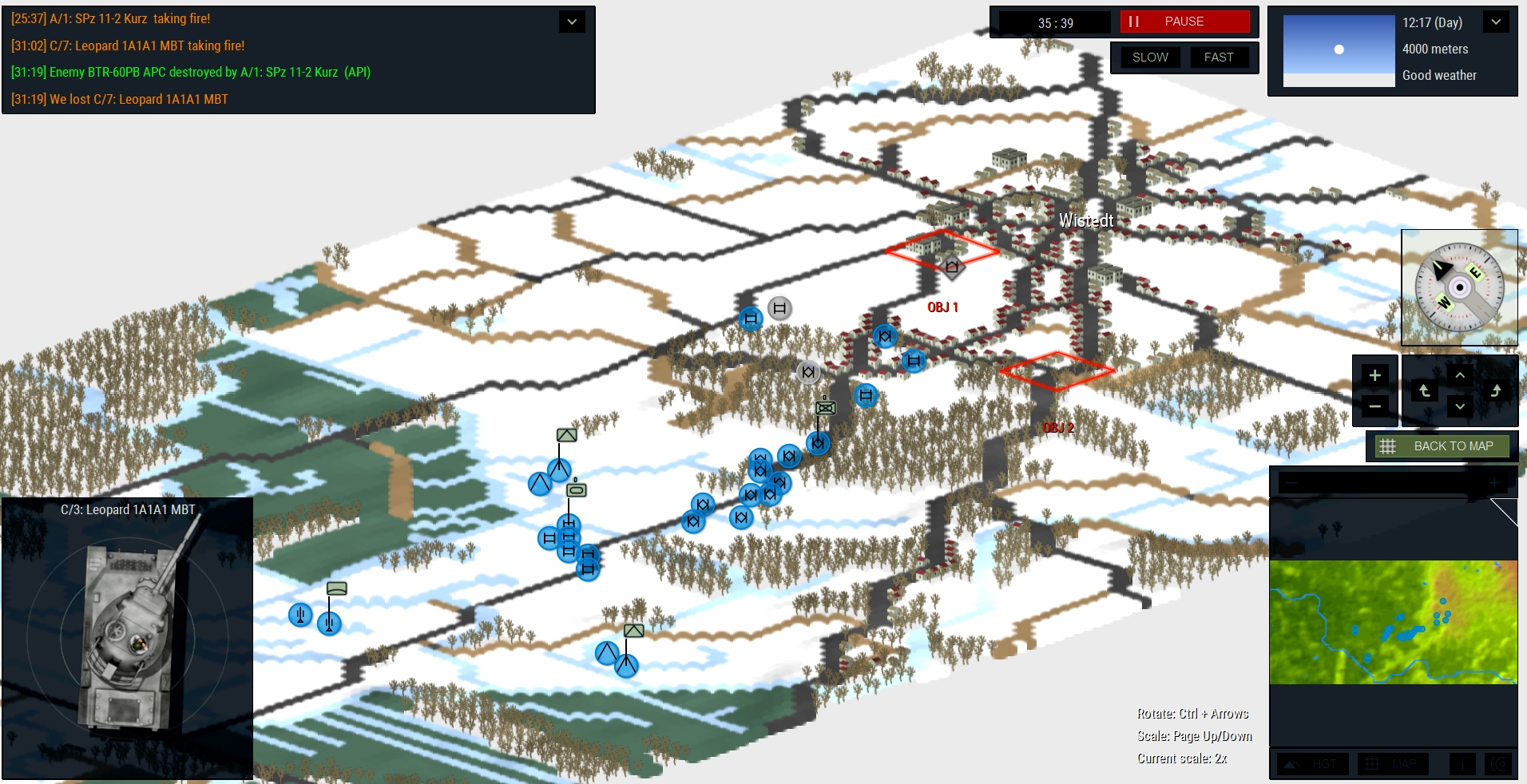 Unfortunately, the preview code is campaignless so I can't tell you anything about that side of things at the moment except what I've read in the forums...

“There will not be an operational layer where you move your units around, and when they meet enemies there will be a tactical fight. A system like that can be fun to play, but it's very hard to try to match the level of realism we have in the tactical level.

Our system will be a branching tree system, where the player is taken from node to node between the battles. The system selects the next node depending on the outcome of the previous scenario.”

Asked yesterday how many scenarios the campaign would contain, a Matrix representative was unable to provide a firm answer: “We don't have a number yet as we haven't finished making them :)”. With the release so close, this state of affairs is surprising. As strong as the battle generator is, a well-crafted story-spiced battle sequence is not unimportant, especially as multiplayer appears to be completely absent.

I doubt Veitikka have time to finish/test their campaign and overhaul their GUI before November 15, which is a shame as the latter has a utilitarian first-draft feel that does the game few favours. Ugly black boxes impinge, panels that should toggle don't, and order buttons that should be colour-coded aren't. The friendly tools and easily understood displays required to control and follow Armored Brigade's gripping tussles are always close at hand, but seem to have had no art input from the folk who created the lovely loading screens or the stylish unit sprites.

I seem to have got this far without commenting on accessibility (admirable) or audio (decent but more ambient sounds, please) or describing how spotting, artillery and aircraft work. Expect more on these facets, together with a campaign assessment and some bolder statements on AI, in November's Wot I Think. In the meantime, if you've any questions related to what I've covered today, park them in the comments section and I'll do my best to provide answers over the weekend.