Assassin’s Creed Odyssey will let us play as either Kassandra or Alexios, both Spartan warriors, but creative director Jonathan Dumont told Reddit that it’s the former who is considered the canon protagonist, at least in the upcoming official novelisation. It won’t affect the game, however, as whoever you play as will be treated as the one, true hero.

Responding to a question about there being a definitive, canon story, Dumont responded: “Yes, there will be a canon represented in the novel featuring Kassandra and her journey. But in the game you decide your path. There is no right or wrong way.”

Ubisoft’s come a long way from using animation difficulties to excuse the absence of playable female characters in Unity, though it’s not hard to raise the bar when you start at the bottom. It quickly changed its tune by letting you play as both Jacob and Evie in Assassin’s Creed Syndicate, and while Assassin's Creed Origins (review) returned to a single, male protagonist, at least he wasn’t yet another boring white fella.

This is significantly undermined by the fact that Ubisoft is treating Alexios like the main protagonist pretty much everywhere else. The Pantheon and Spartan editions both feature Alexios statues, while the physical edition’s cover, though reversible, treats Alexios as the default. 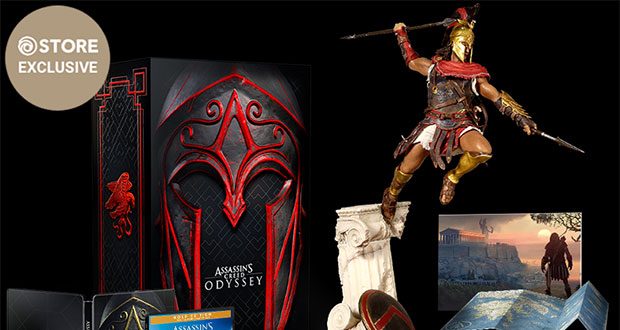 Kassandra statues are available, but they have to be bought separately - i.e. no version of the game comes bundled with a plaster recreation of its one true hero (as according to the book).

It’s unremarkable, unfortunately, but the choice to display Alexios more prominently is especially disappointing at a time when misogynists are kicking off about women in ‘historical’ games, such as Battlefield V. God forbid some guy doesn’t get in the spotlight. Of course, nothing's to stop you from visiting your local video game den and quietly flipping covers to ensure everyone knows who the game's real hero is.

The Assassin’s Creed Twitter account has posted highlights from the AMA, or you can sift through the whole thing here.

Assassin’s Creed Odyssey is due out on October 5.