Assassin's Creed Odyssey is a massive game. In fact, you can't zoom out all the way to see just how big it really is. Encompassing Ancient Greece into a game is no small feat, so when you first visit the map on the pause screen, you may feel overwhelmed. I know I did when I first looked at it. But for those who want to have a handy reference, this guide will simply go over how big the map is, and what the icons mean.

Since there's so much to do, it can be rather intimidating to know where to go and what to do next. To that end, I highly recommend heading to our Assassin's Creed Odyssey guide for more information to get you up to speed on every single attraction available within the boundaries of Ancient Greece. With the amount of stuff to do in any Assassin's Creed game, mostly killing things if I'm honest, it can be somewhat daunting to explore a new region. So, just how big is Assassin's Creed Odyssey? 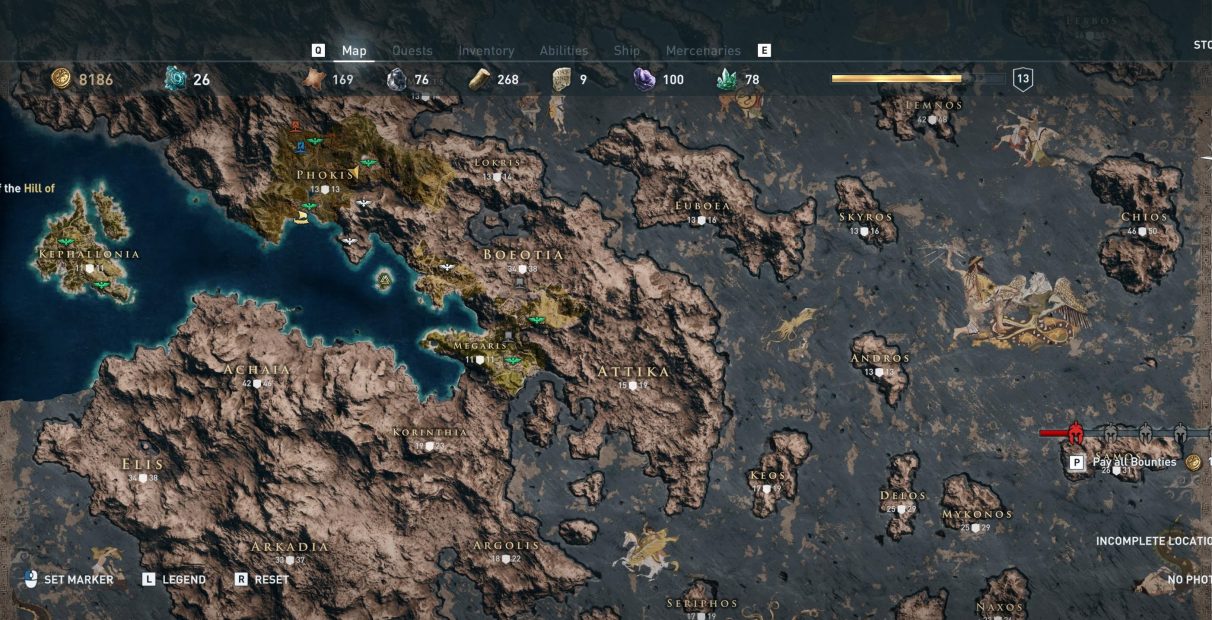 In a few words: Really ruddy big! So big that the map screen can't apparently contain the entirety of the region in one screen. Spanning the vast majority of Ancient Greece, even the smallest island can take at least a couple of minutes to traverse from one side to another.

Larger regions can take several minutes to ride a horse from one end to another as well. Accessing the map is as simple as going into the pause menu, but you'll need to move the cursor all around to view everything. Each of the regions have their own sub-regions, of which all have a viewpoint. You can zoom in and out to see more detail on a specific sub-region, including a blue or red border to show which allegiance that territory currently has.

You can of course change that by participating in conquest battles, more on that in our Assassin's Creed Odyssey conquest guide. Put simply, you won't see all of Greece in a day. You'll be looking at several hours dedicated to just riding around and checking off the viewpoints in each region. If you want to see the map in all its glory, Reddit User "RinoTheBouncer" has posted a full image of the map itself so you can see the entirety of Ancient Greece in all its glory.

But there's another way to travel with minimal input. While riding the horse - Phobos, you'll be able to automatically set it to ride on roads. If you then push the key or button associated with travelling to a specific way point you've marked, or a quest you're on, then your horse will go there instead. Be careful though, as Phobos and any other horse you commandeer are incredibly dumb. They'll essentially have blinkers, running over every person in their way, including hostile soldiers that can attack you.

With every Assassin's Creed game comes a lot of things to do and places to explore. You can filter each of the icons by things you've completed, stuff you've not completed, or even if you just want to look at the historical locations exclusively. Those that would like to share photos with the world, there are exclusive options to filter what you can see by either seeing everyone's, your friend's photos, or just your own. Since there's all those icons littering the map, part of the problem is working out what each of those things even mean.

Well the best thing I could possibly do is just have all the icons on display as the game would show them in the pause menu. Below are two images which show every icon you can find in the game. Click on the images above to expand the images to show all the detail in a readable form. There are two images here so make sure you click the top and bottom part of the image to see the full set. These icons also appear on the game world as well so these images can be useful for those who are just looking to see what exactly something is.