Sailing in Assassin's Creed games of the past was a joyous pastime, though that might have had something to do with the sea shanties. But there was little doubt that sailing and naval warfare would return at some point. In Assassin's Creed Odyssey, this has you take up the helm of the Adrestia, sailing across the Mediterranean in search of treasure and adventure. However there are plenty of pirates, as well as the warring states of Athens and Sparta who can rip apart an unprepared commander at the helm. This guide will go over the ship's controls,what it can do, and explain how to upgrade the ship with resources.

How to sail in Assassin's Creed Odyssey

Fairly early on in the game, you'll gain access to the Adrestia and its crew. Controlling the ship is relatively straightforward in that you can have your chosen hero call out how fast they'd like to go. If you're going at full speed, this will only last a short while before your crew needs to recover, though this is determined by how good your oarsmen are. Travelling speed can be affected by the conditions of the ocean, especially when the ocean gets choppy, as well as the wind direction.

Combat when sailing is also slightly different to that of previous games. Instead of cannons, you have archers and javelins. Pressing the left mouse button on the mouse, right trigger on an Xbox controller or R2 on a PS4 controller, you will fire a volley of javelins that have a very narrow range. Holding down the aim button (right mouse button on mouse, left trigger on Xbox controller, or L2 on PS4 controller), like you would if firing a bow and arrow in the main part of the game will make your archers fire instead.

You can also ram boats for some damage by travelling at full speed, which can easily dispatch downed ships. That said, trying to board ships that are rendered immobile is better as the rewards are greater. Also, if you're about to be attacked, don't forget to brace (Q on keyboard, LB on Xbox controller, or L1 on PS4 controller) as this does prevent a lot more damage than you'd think.

Once you've sunk a ship, your health will restore a bit. This depends on whether you boarded the disabled enemy ship and took out everyone on board (which will fully restore the ship) or rammed into the ship with your own for a smaller chunk of health restoration. 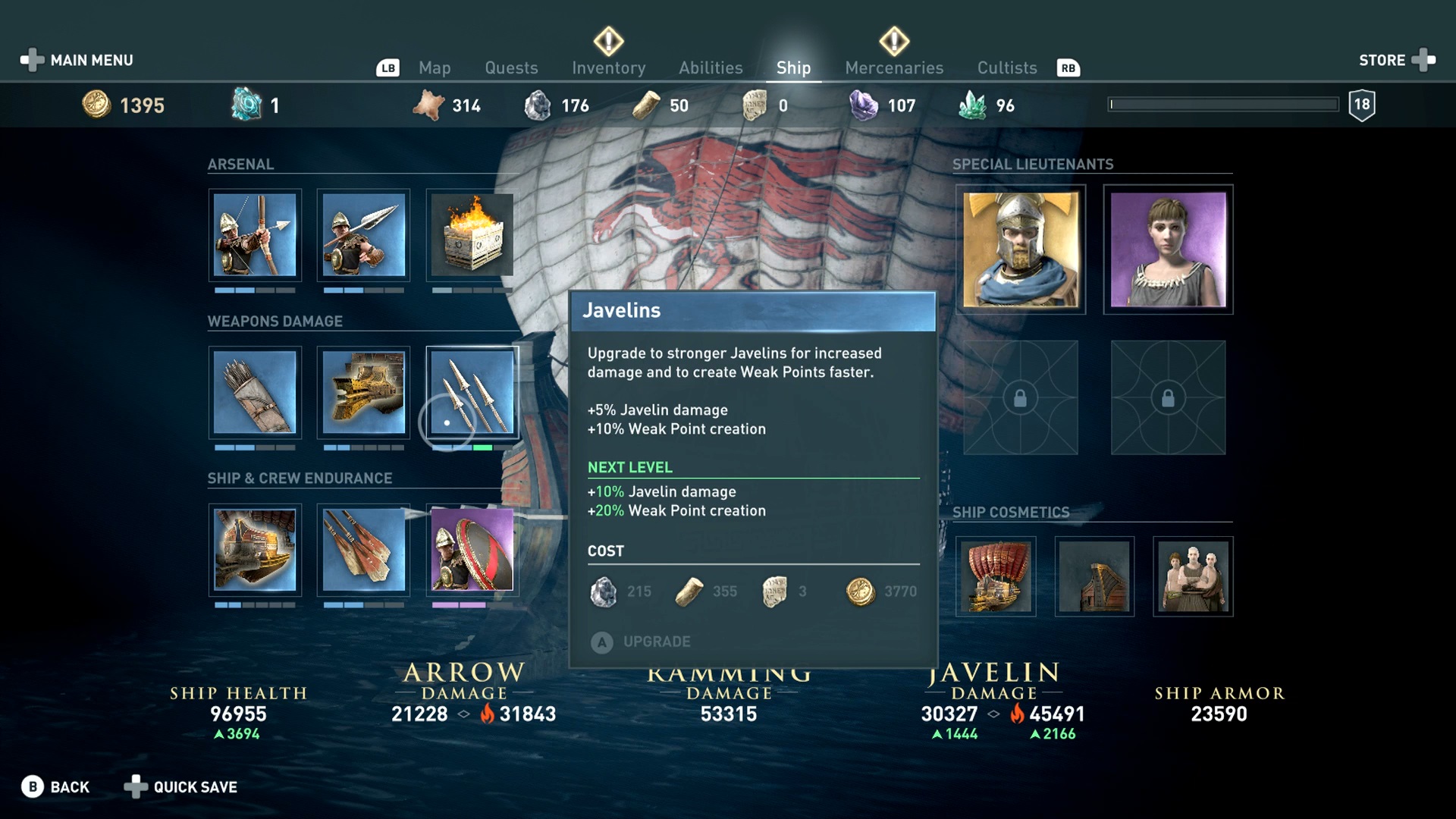 Upgrading your ship and its crew is as simple as collecting resources from around the world. Are the arrows and javelins not doing enough damage? Upgrade your troops for more volleys of arrows or javelins, or the arrows and javelins themselves for more damage per shot. Find yourself taking too much damage? Bolster the defences of your hull with the components you obtain.

You'll need items like wood, hides, and the like, in order to upgrade parts of the ship. I highly recommend building a hearth on your ship to enable those fire attacks which deal lots of damage with adrenaline being built up just like in regular combat. There are six resources that you can obtain to upgrade your ship:

How to get new crew in Assassin's Creed Odyssey

In order to flesh out your crew, you can knock out important foes (those with gold borders on their level ranking) before convincing them to join your side. Make sure your last blow is a non-lethal attack and the enemy will be knocked unconscious. Head up to them and you should see a command prompt to recruit the NPC. Do so and they'll join your crew without hesitation. You can then select them to be part of your team in the Ship menu, with one slot opened initially and further slots unlocked after upgrading the ship's hull. You can have a maximum of four personnel in your entourage.

All the ships cosmetics