A soft reboot four years in the making, Ubisoft Montreal's Assassin's Creed: Origins is one giant step back in time plus a smaller step forward in terms of world design, a stumble in terms of its levelling system, a sideways hop as regards combat and an exercise in jogging on the spot in terms of missions. This is exactly the kind of complex footwork that leads to messy accidents during parkour sequences, but somehow, the game keeps its balance throughout, though it's not quite the revival I was hoping for.

The bulk of Origins unfolds in North Africa, during the decline of Ptolemaic Egypt around 100 years BC, and is the tale of Bayek, a Medjay – think god-bothering policeman – on a quest to avenge his son's death at the hands of a powerful, scattered cult. As per not-so-fine tradition there's a modern-day component, featuring everybody's favourite villainous VR company Abstergo and an absolute avalanche of backstory documents, but it takes up less than one hour in a 30 plus hour game. You'll also spend a little time in the shoes of Bayek's Medjay wife, Aya, whose sense of the bigger picture occasionally feels like a segue into the original Assassin's Creed, and occasionally like Ubisoft passing judgement on its own recurrent structures and cliches (including its preference for leading men). As she says to Bayek at one point, “I must build a world that is larger than our griefs.”

Bayek himself is one of Ubisoft's more sympathetic protagonists, angry and hard-wearing yet not above the odd chariot race or round of hide-and-seek with the kids. Before I get to him, though, here's a quick paean to the intricacy of the game's historical recreation and in particular, the old man I saw seated in a corner with a collection of odd clay pots near the Library of Alexandria. In a functional sense the man was just background noise, his only role within the game to look spooked when randos decked in colourful weaponry fall off nearby buildings, but his air of concentration caught my attention. As I watched, he selected a pot and tapped it delicately with a hammer till it broke, revealing a shiny new-minted arrowhead, which he added to a pile on his left. I was delighted and mystified. How did the arrowheads get into the pots, and where did they come from? 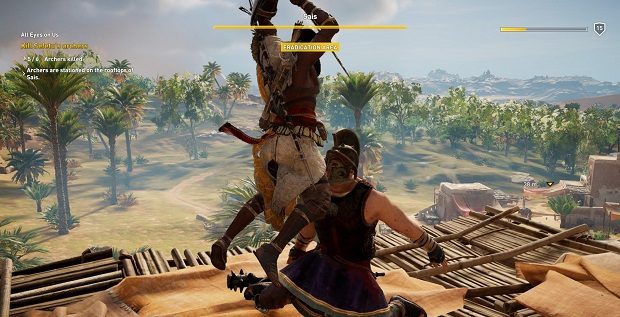 Many hours later, while roaming the lush, darkened city of Memphis in search of a renegade priest, I found the answer: a man hunched over a coal fire, melting down pieces of iron which he then carefully poured into similar pots using a pair of tongs. Of course - the pots weren't pots, they were moulds. I took a moment to savour the thrill of actually learning something about a long-buried society, under my own steam and without any exposition, in a game that otherwise defaults to killing people, hiding from them or killing them while hiding from them. Then I ran up a fortress wall by accident while turning a corner, and a man with a tower shield kicked my head in.

To play Origins is often to be hit by what I can only describe as acute “verb envy”, as the grandeur and delicacy of the setting chafes against the small, broad range of ways you're able to act upon it, a range that is a little bare-bones even by the standards of Ubisoft's famously repetitive open worlds. Bayek's story takes him from the pyramids of Giza (already falling into ruin) to the sacred pools of Shedet, home to the crocodile god Sobek, but there are essentially four kinds of activity throughout: find the thing (or, at least, follow the waypoint), rescue the hostage, acquire objects, and kill one or all of the dudes.

Many chapters commence with an overwrought detective sequence in which you call upon a mystic pulse ability to highlight suspicious objects, such as giant vats of poison. Then it's off to a fortified garrison, outpost or naval yard, where you're free to use any combination of stealth, acrobatics and bloodshed to ruin everybody's lunchbreak on the way to your objective.

In one of many nods to the Far Cry and Tom Clancy sequels that have flourished in Assassin's Creed's wake, Bayek has a pet eagle Senu who can be remote-controlled to flag up tactical props such as alarm braziers (which you can booby-trap), and grumpy lions in cages (which you can shoot open from afar). There are animals out in the wild, too, from flights of cranes to dangerously inconspicuous crocodiles, all a source of upgrade materials for your various tool bags and armour pieces. They don't play as extravagant a role as in, say, Far Cry: Primal, because much of Origins takes place inside walled encampments, but every now and then you'll parkour straight into a tiger while flanking a position, and things will get rather chaotic. I once found myself up a tree, wiggling around to avoid arrows while several enraged hippos pawed at the trunk.

If Assassin's Creed: Origins deals from the same old pack, Ubisoft Montreal does shuffle the cards with some artfulness given the greater amount of ground it has to cover. Those fortified areas are sufficiently varied in structure to host a number of missions per region; they can be rinsed of threats and treasures the first time you visit, or returned to once you've amassed new abilities and better gear. 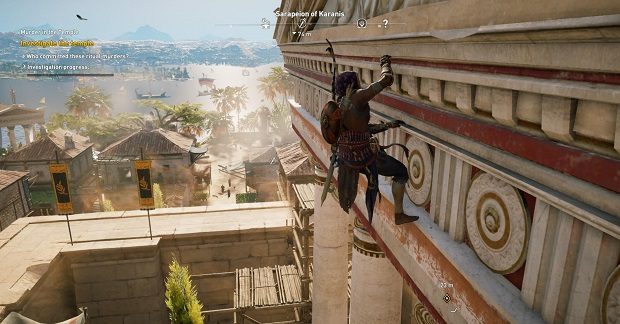 The quest design is relaxed enough that you can almost always wander off mid-mission if you're losing interest, and every side story has enough intrigue to dispel the tedium of scaling yet another gatehouse in search of yet another corrupt merchant or captain. Origins uses its source material to good effect here, introducing you to Ancient Egypt's animalistic pantheon, ornate funeral rituals and festering tensions with the ascendant Greek and Roman civilisations as it feeds you waypoints and targets. It's easy to forget that you're going through the motions when you're chatting to a man whose job is pulling somebody's brain out of their nostrils.

The subject matter also lends itself to some wonderfully textured location design, not just imposing and detailed but expressive of potent social divisions and vast distances in time. Greek shrines are made up of freshly cut marble and terracotta, their painted wooden trellises relatively unscathed by the blowing sand and sunlight. Egyptian monoliths are grander but shabbier, facades dimmed by age, often better integrated with the low dwellings that surround them. The sounds travel great spans, too, from the chants, pipes and drums of a temple rite to the insect hum and squelch of the farmlands along the Nile, where you'll glimpse tall ships sliding across the horizon.

Bayek feels at home in this setting in a way other Assassin's Creed leads often struggle to, thanks in part to some beautifully judged context-sensitive animations. Walk him through a field and he'll reach out absently to brush the stems. Stand near a fire and he'll hold out his hands to it. Catch a lift aboard a fishing boat and he'll lean casually against the mast, facing the pilot.

In a broader sense, your Medjay profession allows you to convincingly play the part of open world oddjobsman, after the example of The Witcher's Geralt – a figure of mild dread to whom people are nonetheless prepared to entrust their secrets and grievances. You might question whether Dragon Age's Inquisitor really has time to track down a lost book, but for a wayfarer like Bayek it's all in a day's work, as is breaching the Pyramids themselves to bring certain predatory souls to justice. Even the bodycount you'll amass, the usual point of departure between player agency and character motivation, doesn't feel entirely out of sync. Bayek is a bit of a zealot, happy to execute the odd smalltown blasphemer or purge a few bandit camps while chasing bigger prey.

In battle, he's the most capable Assassin to date. Origins swaps the series' traditional smallscale duelling and countering for a more aggressive and flexible system backed up by a three-branch unlocks tree (in essence, bows, melee and gadgets) and an absolute deluge of lootable gear. Armed with light and heavy attacks, a shield and a pocketful of smoke bombs and firebombs, you'll charge though mobs where other Assassins might have retreated to the sanctuary of a haystack - whittling away at multiple health bars at once, and flattening bigger foes with uber-moves that are powered up by dealing or receiving damage.

It's a recipe for gratifying freeform mayhem, all slow-mo guard breaks, splattery finishers and quickfire alternation between styles – slow, pulverising strikes with a halberd one second, a flurry of poison arrows from your light bow the next. That's providing you bear in mind the game's constrictive levelling system, which often obliges you to chew through sidequests if you're to make headway in certain missions or regions. 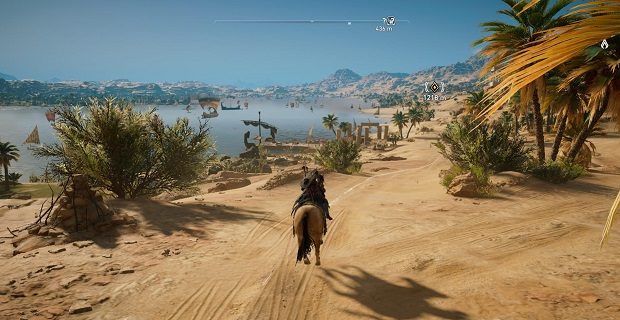 Tackling an opponent several levels above you is by turns frustrating and a shambolic exercise in taking advantage of the AI's less than surgical wit. You'll drop 30 feet to land blade-first on somebody's neck, only for them to shrug you off impatiently as though dislodging a cat, then spend five minutes playing kiss-chase around a rock. In the process you might fall foul of the game's stealth systems, which are bafflingly fiddly given Ubisoft's pedigree in this department. I often struggled to work out from feedback whether I had gone incognito, which amongst other things determines whether you'll execute a silent kill from behind or merely slash your target playfully across the rump. Enemy perception can be hard to gauge – once roused, guards are sporadically able to see through walls – as can the time gap between breaking line of sight and enemies losing interest.

These annoyances fade after a dozen hours or so, even as the feeling of over-familiarity intensifies. Ubisoft's open worlds have always operated a bit like global fast food chains - conjuring up huge and opulent landscapes packed with the fruits of painstaking historical research, only to serve up the same greasy little nuggets of homogenisation. A degree of design economy is, of course, inevitable even when you aren't talking about games as expensive and complex as Assassin's Creed, but a game billed as a franchise refresh really ought to have a bit more to say.

Still, Origins handles its creative inheritance more elegantly than some open worlders, not least because unlike, say, the first game's Altair, its protagonist actually feels like he is of this realm rather than merely in it. And if the levelling and to-do list grate, the series has never offered a society and a landscape so worthy of close attention. The next game needs to be transformative, but this is a fine place to spend time while it gestates.

Assassin's Creed Origins is available now for Windows via Uplay and Steam for £49.99.