There are three main resources in Assassin's Creed Valhalla when it comes to upgrading gear. The rarest of them all are Tungsten Ingots, which can only be found in the higher level areas around England. You'll need Tungsten to upgrade your weapons and armour from flawless to mythical level. Finding them can be pretty tricky, given that they're locked away in chests in some pretty tough areas. Here's where to find Tungsten Ingots.

In this Assassin's Creed Valhalla guide:

How to get Tungsten Ingots in Assassin's Creed Valhalla

Tungsten Ingots are only found in the highest level regions of Assassin's Creed Valhalla. This means Euvicsire, Hamtunscire, Snotinghamscire, Lincolnscire and Glowecestreshire. Basically any area 160 or above in suggested power level. All you need to do is head into these areas and scout out gold markers on your compass. Tungsten Ingots can be found at locations marked with the ingot icon. 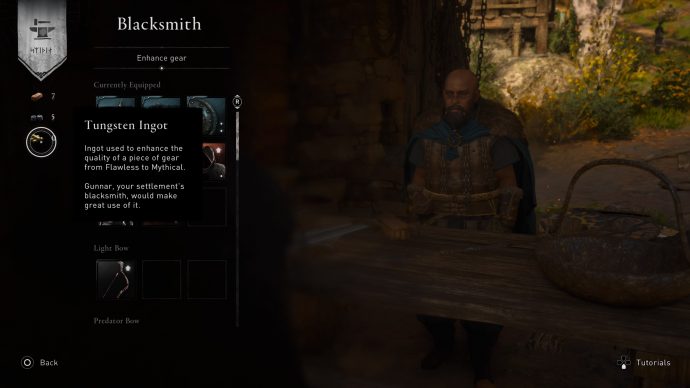 It's worth noting that unlike Nickel Ingots, Tungsten Ingots cannot be purchased once you've found your first one. There are other ways to get them however, which we'll detail below.

So far we've managed to trade wolf fangs, animal guts and viper eggs for rare resources. Make sure you're looting any animals you kill, especially vipers while exploring crypts.

Another way to get your hands on Tungsten Ingots is to trade in fish. You can do so after you've unlocked the Fishing Hut at your settlement. If you need to know where to find a specific fish, use our fishing locations guide.

What are Tungsten Ingots used for?

Tungsten Ingots are used for upgrading gear. They are used in the final upgrade tier, levelling weapons and armour from flawless to mythical rarity. This increases the number of upgrade slots available on the gear piece, letting you increase stats even further for a specific gear piece.

Now that you know where to get this rare resource, check out our guide to making money in AC Valhalla, or for even more tips, check out out Valhalla walkthrough.