Raiding can be tiresome work, so it's good to know that Assassin's Creed Valhalla has plenty of romance options that help you blow off steam between battles. These romance options are unlocked in a number of ways, some through settlement upgrades, some via story progression. So that you're not missing out of any potential love connections we'll be listing every romance we find during our time with Assassin's Creed Valhalla. We'll detail how to start off each romance quest, and which characters are available to romance.

In this Assassin's Creed Valhalla guide:

Assassin's Creed Valhalla romance options: which characters can you romance

You can romance the following characters in Assassin's Creed Valhalla:

As we spend more time with the game we'll add more to this list. To read more detail on romancing each character, head down the page where we'll be explaining each. It's worth noting that all romance options are available regardless of which gender you pick.

Bil is likely the first romance option you'll come across in Assassin's Creed Valhalla. They can be found in Norway, specifically next to a set of twin ponds to the north of your camp. We've shown the exact location on the map below.

To romance Bil you will need to retrieve their comb from the nearby pond. Just head to the rock in the centre of the pond and jump in. Dive down and follow the tunnel at the bottom. The comb is on the ground here. Once you've returned the comb you'll go on a date with Bil, and can take things further if you'd like. 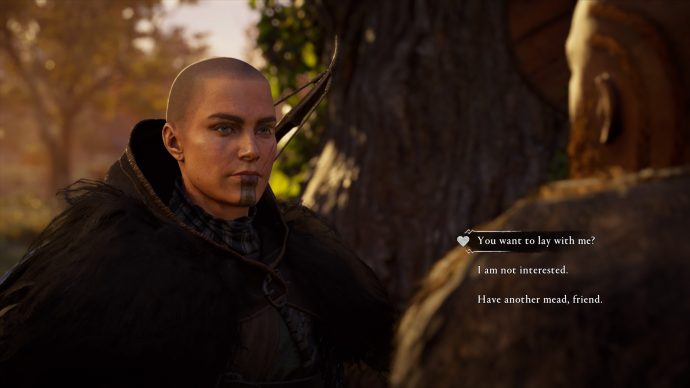 As part of the East Anglia alliance quest you will help a would-be King Oslwald prove his worth to his new bride's family. There are two brothers to impress, and while they both start off pretty frosty towards Eivor, Broder will take a liking to them at the end of the quest.

There's a wedding scene in which you get to drink, play games and chat to your new East Anglian friends. Broder will challenge you to a drinking contest and then later on he will proposition you over by a dining table (classy). It's a pretty simple romance option, you either choose to 'lay with' him, or you simply move on.

While playing through the Asgard section of Assassin's Creed Valhalla you can gift Thor's bridal circlet to a person named Gonlodr. You'll meet them in Jotunheim, and can romance them once you get to know them a bit. You'll travel to this icy world after completing the main mission in Asgard. 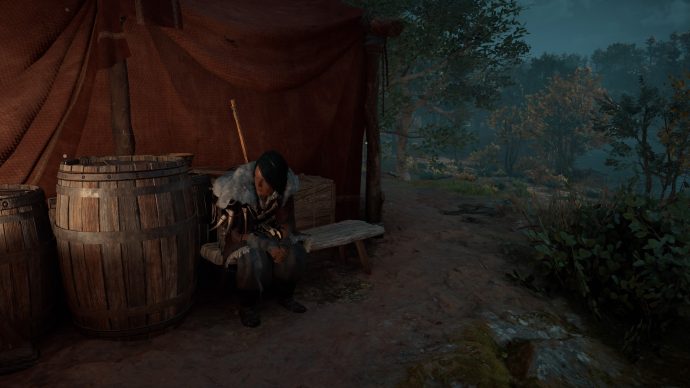 The next romance option on our list is Petra. They are a hunter that sets up the Hunter's Hut at your settlement. You will first need to upgrade your settlement to level 2 before Petra and Wallace will show up. You'll need to spend some resources to build the hut initially, then Petra will give you some quests involving legendary animals.

These are fun missions, and if you complete them all you'll unlock an option to go on a date with Petra. This date involves shooting things with your bow, so make sure you hit the targets to impress your date. After this, you can complete the romance arc for Eivor and Petra.

Estrid can be romanced as part of the Essexe arc in Assassin's Creed Valhalla. You'll be helping her stage a kidnapping to get out of her marriage, and can romance her after the final mission. Just make sure you pick the right traitor! 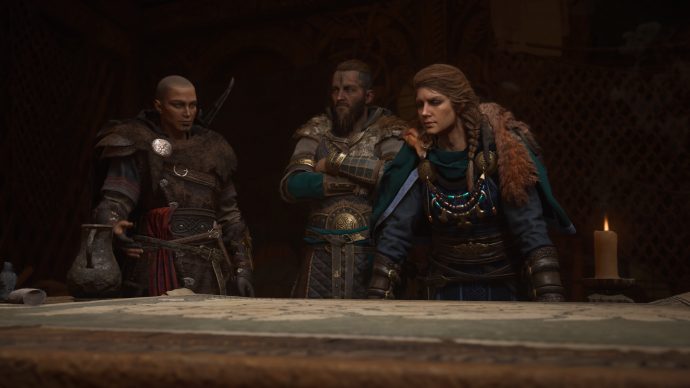 Randvi is the most surprising of the romance options in Assassin's Creed Valhalla, given that she is with your brother Sigurd. Well, Sigurd is away a lot and Randvi clearly has the hots for Eivor, at least according to some love notes you can find hidden around the longhouse.

To romance Randvi you'll need to complete three main missions at the Alliance Map. After you've done so (ours unlocked after finding the traitor at Grantebridge), there will be an option to take Randvi to Grantebridge for a day trip. Follow this questline to romance Randvi but be careful of when you seal the deal. Sigurd and Randvi will eventually separate on their own, if you move in before this happens you will affect a major decision at the end of the game.

To romance Stigr you will need to head to Snotinghamscire. This is a pretty late area in the game, and has such a high-level that you'll be able to pick up some Tungsten Ingots while on your travels. You'll want to head to Hemthorpe in the Northern part of the region. All you have to beat them at flyting.

Stowe can be romanced somewhat, more flirted with, during the first part of the Lunden arc. Just head to your war table and start the mission. You'll need to make your way to the northern gate, where a fight will break out. You'll get a brief moment to flirt with Stowe afterwards, but he won't really return the favour. As you play through the story it becomes clear that he only has eyes for Kere.

To romance Tarben in Assassin's Creed Valhalla you will need to first build the Bakery at your settlement. After you've done this you can start doing missions with Tarben. Eventually you will go fishing with him and there will be a romance option.

That's all of the romance options we've found so far. Once you're done with that why not check out our guide to changing gender in AC Valhalla or our Valhalla fishing tips guide.