Nvidia's first crop of RTX gaming laptops are finally here and the first one to slide across my desk is Asus' ROG Strix Scar II GL504GW. Packed with an Intel Core i7-8750H processor, 16GB of RAM and one of Nvidia's new RTX 2070 chips, this 15.6in laptop is primed and ready to take full advantage of its 1920x1080 resolution display and 144Hz refresh rate, but is it worth spending a massive two grand on? Let's take a look.

The timing's a bit ironic, really, given that only a couple of hours ago I was expounding the virtues of Shadow's cloud PC gaming service (which works beautifully when streaming at 1080p), but sometimes you want something a bit more powerful that you can take with you on the move and not have to worry about connecting up dozens of different peripherals.

Priced at £1949 / $1930 at time of writing, the Asus ROG Strix Scar II certainly doesn't come cheap, but when it's only around £200 more expensive (and actually $100 less) than the GTX 1070-powered Alienware m15 I looked at a month ago, it's actually pretty competitive compared to other high-end gaming laptops.

As you may recall, the Alienware m15 also had a 15.6in, 1920x1080 display with a 144Hz refresh rate (or at least the model I tested did), but its GTX 1070 wasn't really powerful enough to make use of all that extra Hz headroom when playing games on maximum settings.

The RTX 2070-powered Scar II, on the other hand, is far more capable of filling those frame rate boots. Naturally, you'll have to make do with the fans kicking up a storm any time you play a game (they were so loud and constant it sounded like I was by the seaside half the time), but as long as you're fine with plugging in a pair of headphones, the Scar II is a highly capable portable gaming machine indeed - made all the more impressive, I might add, by its comparatively slim 26mm thick chassis and lovely thin bezels.

In Shadow of the Tomb Raider, for example, I saw frame rates between 59-72fps in Cozumel's busy town square, reaching as high as 85fps in the opening tomb section on Highest, and that was with the game's tough SMAA x4 enabled. Whack it down to just regular SMAA and you're looking at 100fps+.

Even Monster Hunter: World was pushing 80fps out in the dense Ancient Forest on Highest, and never dipped below 55fps even when I was fighting its giant dinos. Similarly, Final Fantasy XV produced a lovely smooth range of 66-76fps on Highest with Nvidia's fancy effects turned off, which rose to 75-92fps when I knocked the quality settings down to High. I still saw a smooth 51-60fps with Turf Effects and HairWorks switched on though, which really isn't bad all things considered. 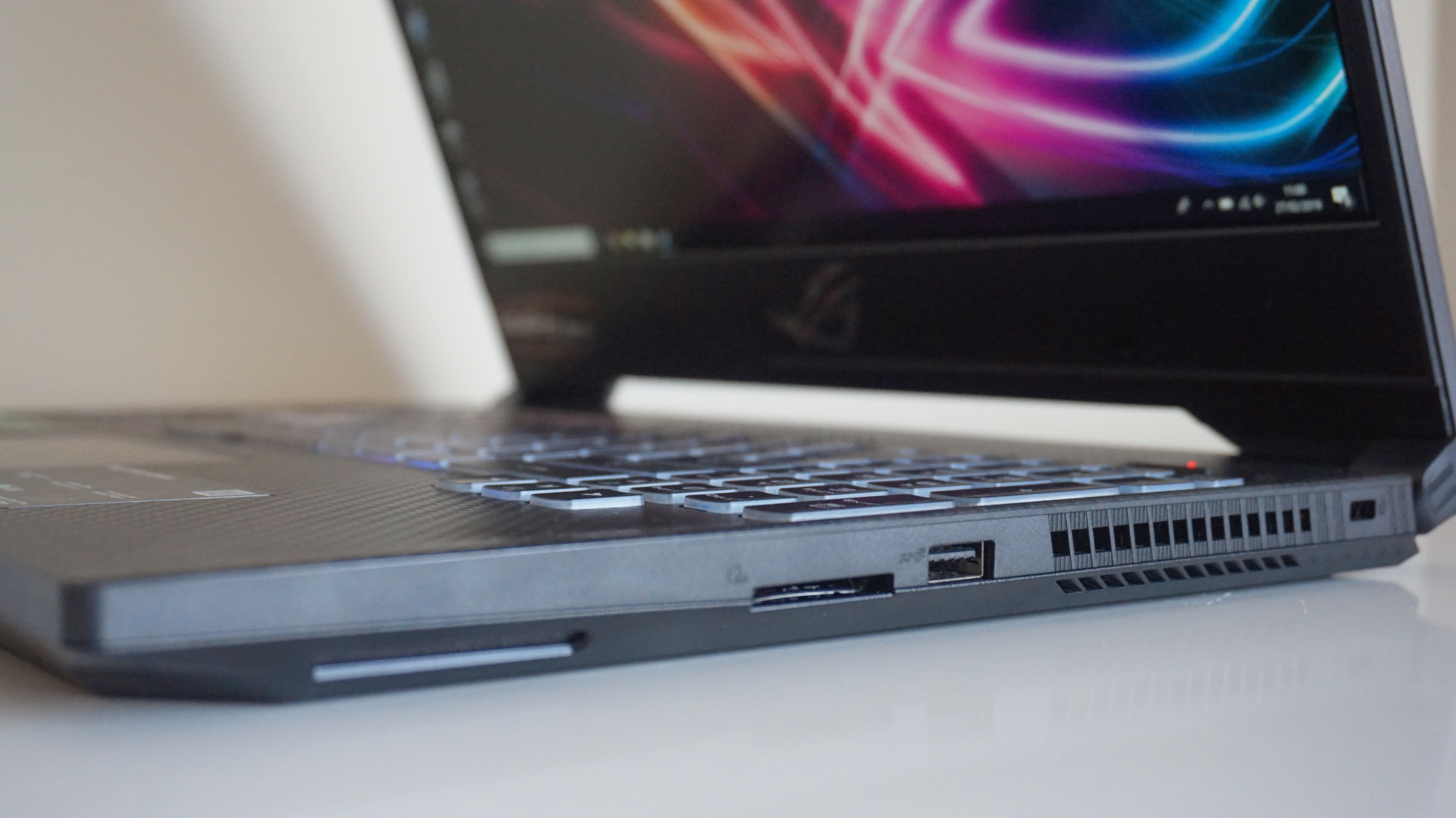 The Witcher III also made excellent use of the screen's 144Hz refresh rate on Ultra, as I saw highs of nearly 100fps (98fps to be exact) when gazing out on some of its lovely vistas. That often fell back down to nearer 70fps when I was charging through its dense woodland areas, but that's still a heck of a lot smoother than what I saw on the Alienware m15.

I've removed my Assassin's Creed Odyssey results from this review, as I've since been informed that the frame rate stutter I encountered on this and other laptop tests is, in fact, a bug in the game and nothing to do with the laptop. It's in the process of being fixed, but until then the game won't be appearing as part of my laptop benchmarking results. Read more here.

Naturally, there will always be some games that will struggle to hit higher frame rates on max graphics quality, but knocking the quality down a notch will almost certainly hoist you back up over the 60fps line. Total War: Warhammer II, for example, peaked at an average of just 62fps on Ultra - not that that's anything to be sniffed at, of course - but rose to an average of 76fps on High.

Metro Exodus needed a bit more cajoling, all told, averaging 51fps in its dedicated benchmarking tool on Ultra with all extra effects switched on (except ray tracing and DLSS, in which case you're looking at an average of 49fps) and just 63fps on High, but whack it down to Normal and you can expect to see a very agreeable average of 84fps.

Simpler, fast-paced games, however, are ideal partners for a laptop such as the Scar II, as both Doom and Forza Horizon 4 were way up into triple figures throughout the majority of my testing. Doom rarely dipped below 105fps on Ultra quality, often hitting 140fps during some of its quieter moments, while Forza Horizon 4 averaged 100fps on the dot (also on Ultra) when I ran it through the game's internal benchmark, hitting highs of 112fps and lows of 87fps.

Regardless of whether you're playing the latest blockbusters or more casual indie fare, at least the Scar II's brilliant screen makes everything look properly top notch. In fact, I reckon it's exactly the same IPS panel as the Alienware m15, as my i1 DisplayPro calibrator showed it was capable of displaying an identical 85.2% of the sRGB colour gamut. That's pretty good as laptop screens go, and certainly one of the better ones I've seen in recent months.

It's also got plenty of brightness at its disposal - up to 355cd/m2, if you want to put a number on it - giving you plenty of leeway if you happen to be using it near a sun-drenched window, and its black level of 0.27cd/m2 (the closer to 0.00cd/m2, the better) also ensured darker elements of the screen actually looked like proper black as opposed to a weak sort of grey. Combined with an excellent contrast ratio of 1303:1 (by my measurement), the Scar II's display is gets a big thumbs up. 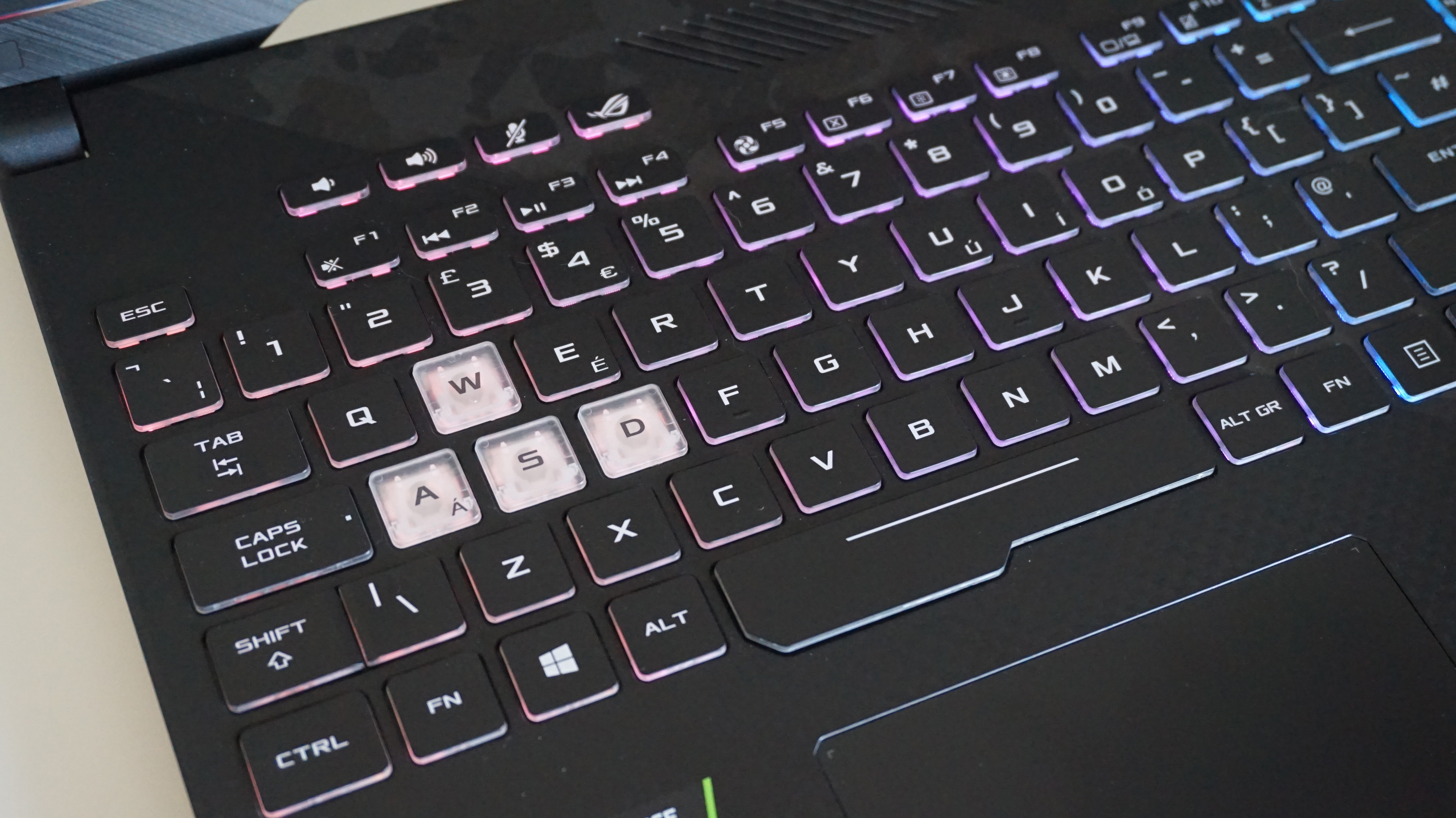 Asus have also chosen a nippier NVMe SSD for the Scar II's primary drive, too, as the 512GB Intel model inside my particular review sample managed random read and write speeds of 48MB/s and 99MB/s in AS SSD's 1GB random test, beating the m15's scores of 36MB/s and 93MB/s respectively. The only downside is that the Scar II's secondary storage unit is a 1TB Firecuda SSHD hybrid drive, which is a far cry from having a second 512GB NVMe drive like my Alienware m15 sample. Still, I'd swap that second SSD for the Scar II's extra graphics oomph any day.

One thing the Scar II does have in common with the m15, however, is its mildly irritating keyboard layout. Once again, the RGB backlit keys themselves were beautiful to type on, offering buckets of travel and quick, sharp key presses. It's about as close to a mechanical keyboard as you're probably going to get on a laptop, and once I'd actually got my hands in the right place, it was just brilliant.

You see, the Scar II's layout is slightly different from the Dell XPS 15 I use for work everyday, mostly because it has a number pad crammed in on the right hand side. This naturally shunts everything over to the left a bit, which when you're old and decrepit like me requires a significant amount of time to mentally re-calibrate where I need to put my hands. It's also got a short left Shift and single-height Enter key, which meant I spent a fair amount of time hitting the \ and # buttons when reaching for their stunted neighbours.

Much like the m15's keyboard, it's probably something I could get use to over time. But if you're moving from a laptop with no number pad to one with a number pad, you may feel a bit frustrated when you first get to grips with it. 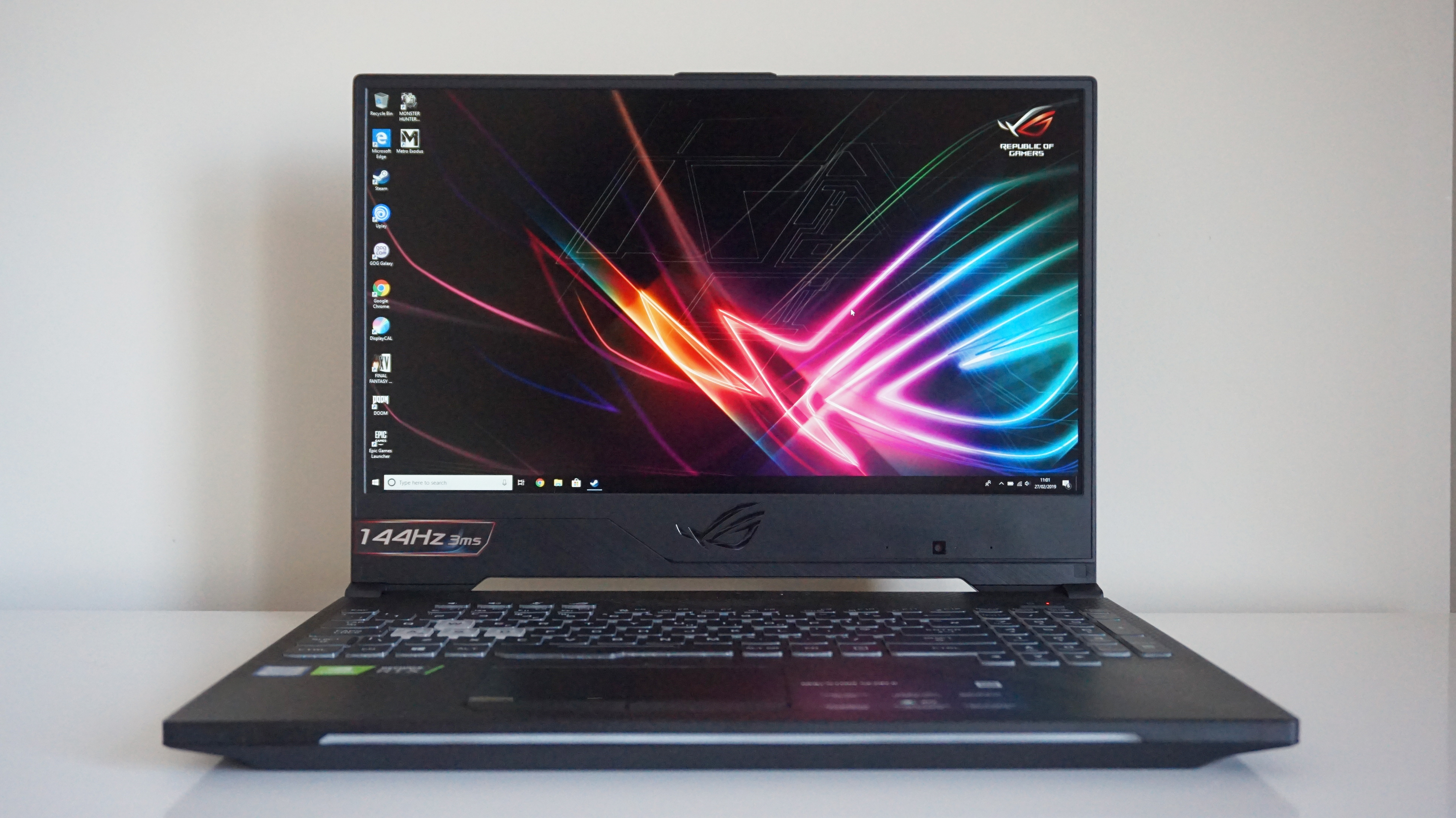 Still, I very much appreciate Asus separating out the volume and microphone mute keys so you don't have to peer at the long line of Fn buttons just to try and turn the sound down a bit, and the dedicated ROG logo button also gives you nice and easy access to the Scar II's customisation options.

Overall, I'm very much a fan of the Asus ROG Strix Scar II GL504. While its half black, half camo interior isn't nearly as sexy as the Alienware m15's stunning red number, I must admit that Asus' machine is almost definitely better value for money thanks to its more powerful graphics chip and ever so slightly nippier CPU. As such, anyone after a high-end gaming laptop with a gorgeous 144Hz display should almost definitely have the Asus ROG Strix Scar II at the top of their list.