If you click on a link and make a purchase we may receive a small commission. Read our editorial policy.
Developer: Hempuli Oy
Publisher: Hempuli Oy

I first saw Baba Is You a year ago during the Experimental Gameplay Workshop at GDC, and was -- like everyone else in the crowd -- absolutely blown away. But, of course, with these big novel ideas always comes the fear that it might not translate into a coherent game. Some of the stars of the EGW have gone on to be somewhat flat, their hook/gimmick never finding its way to becoming a compelling reason to keep playing. But, hoorah, not this time! Baba Is You is immediately completely superb, a puzzle game where you literally rewrite the rules as you play.

It's a lot easier to show than tell with an idea like this, so take a look at this trailer that captures the core notions:

So, think sokoban/crate-pushing puzzle game (Ittle Dew, Stephen's Sausage Roll), but where the tiles also include the syntax that defines the behaviour of objects in the puzzle. A level may have a goal walled off, and tiles that read "WALL", "IS" and "STOP" in a row. Push the word "STOP" away from the line, and now walls can be passed through. Or indeed push the word "KEY" in the place of "STOP" and the entire level's walls will turn into keys.

In most levels, the goal is to get you, Baba (a rabbit-like thing) to reach the goal, a flag. Although of course that's all up for change if it's possible to rearrange the word tiles in front of "IS" and "YOU", or what might come before "IS" and "WIN". "KEY IS YOU" will have Baba become an object in the level, and have you playing as a, or indeed all, keys. "JELLY IS WIN" will make any jellyfish the level may contain become the new goal. And then it starts to get more complicated. 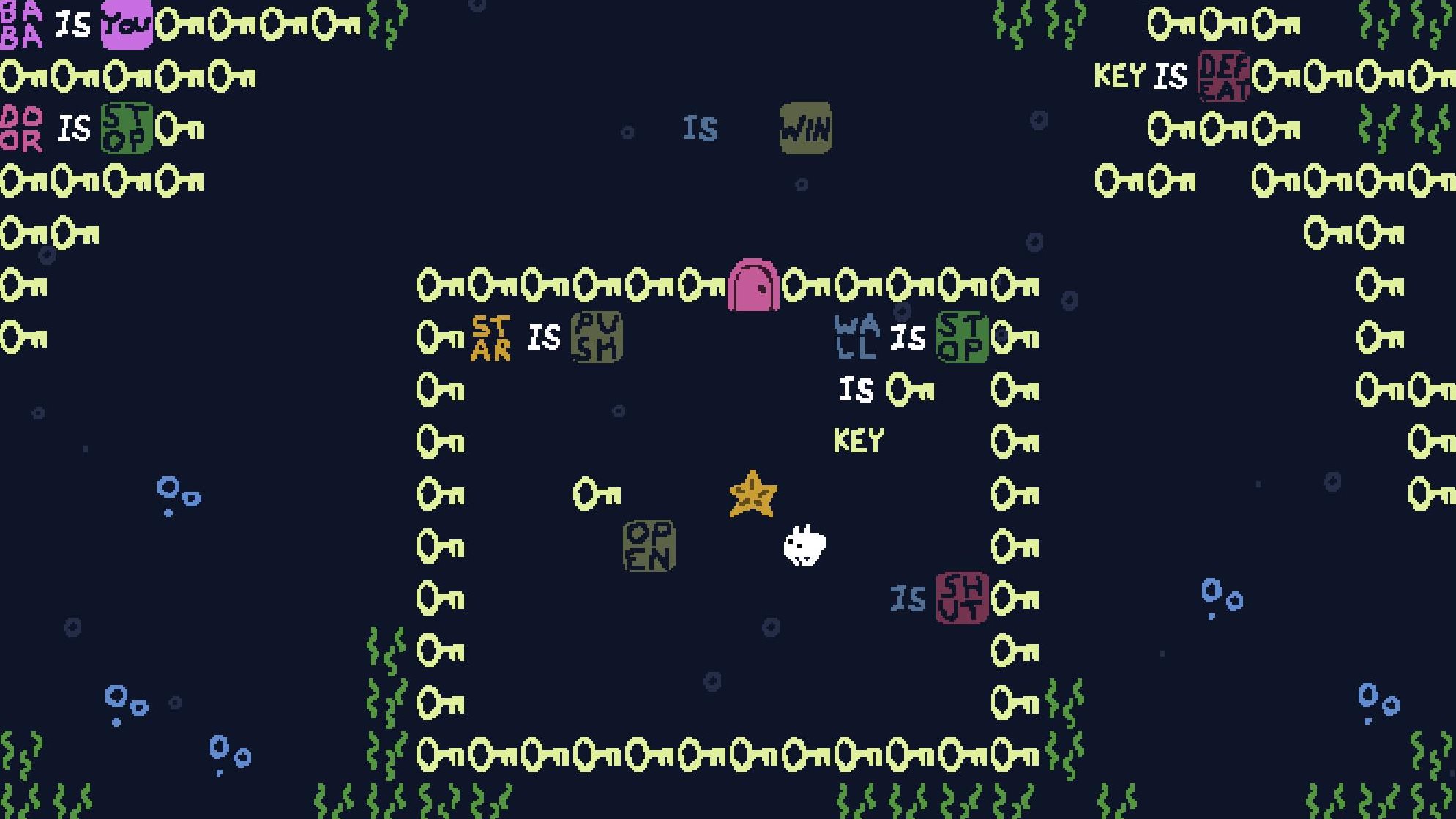 Finding out what you actually do is very much the point of playing Baba Is You, which is excellent while you're playing, but a pain in the neck when trying to explain the game to anyone else. Because stumbling upon the game's rules is a vast amount of the pleasure. Seeing a puzzle which, at first, looks utterly impossible, becomes a source of joy when you realise how else you can manipulate the rules. A screen might show the flag completely surrounded by walls, and the wall syntax written in a corner so none of its blocks can be moved. Argh! And then, you try a few different things, learn from what does and doesn't work, store ideas that didn't work out for later levels, and then have the moment of revelation. 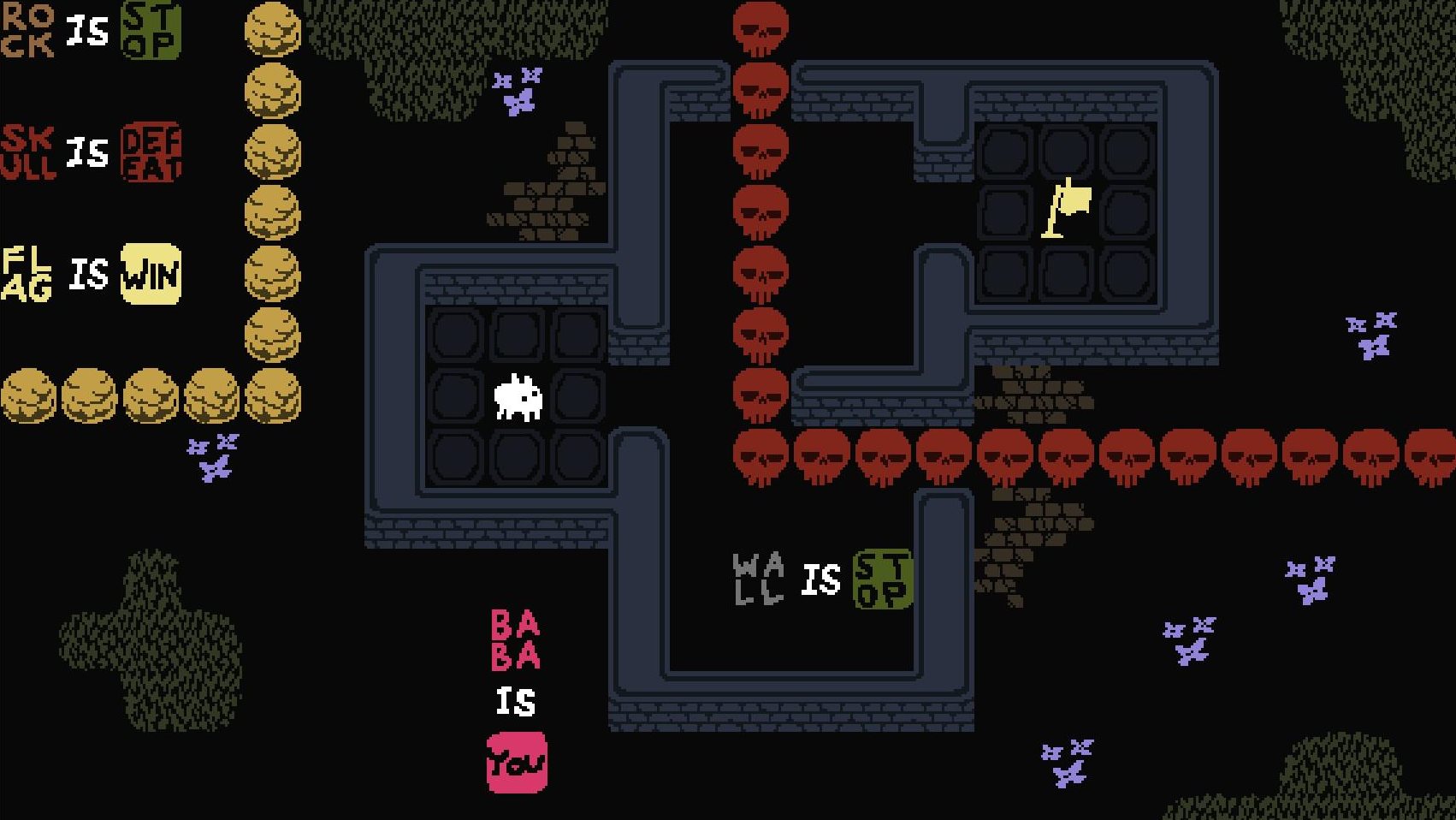 Sokoban rules do apply, so you're going to want to avoid pushing tiles into corners or against walls. However, mercifully, you always have access to an "undo", letting you take as many steps back through a level as you wish. The main reason why I've never enjoyed the puzzle type is that one wrong move usually means restarting an entire level, but thankfully not so here.

However, tiles being against edges, or walled off, becomes a useful starting point in any level. Noting that Baba is always going to be you this time, and there's no way to stop keys from being deadly, means you eliminate a whole pile of tricks and techniques you've developed, and focus elsewhere. It also introduces rules that prevent common tricks from working, like having inaccessible tiles reading, "FLAG IS FLAG", which means any rule you try to create that directly contradicts one that previously exists is made void. Cunning. 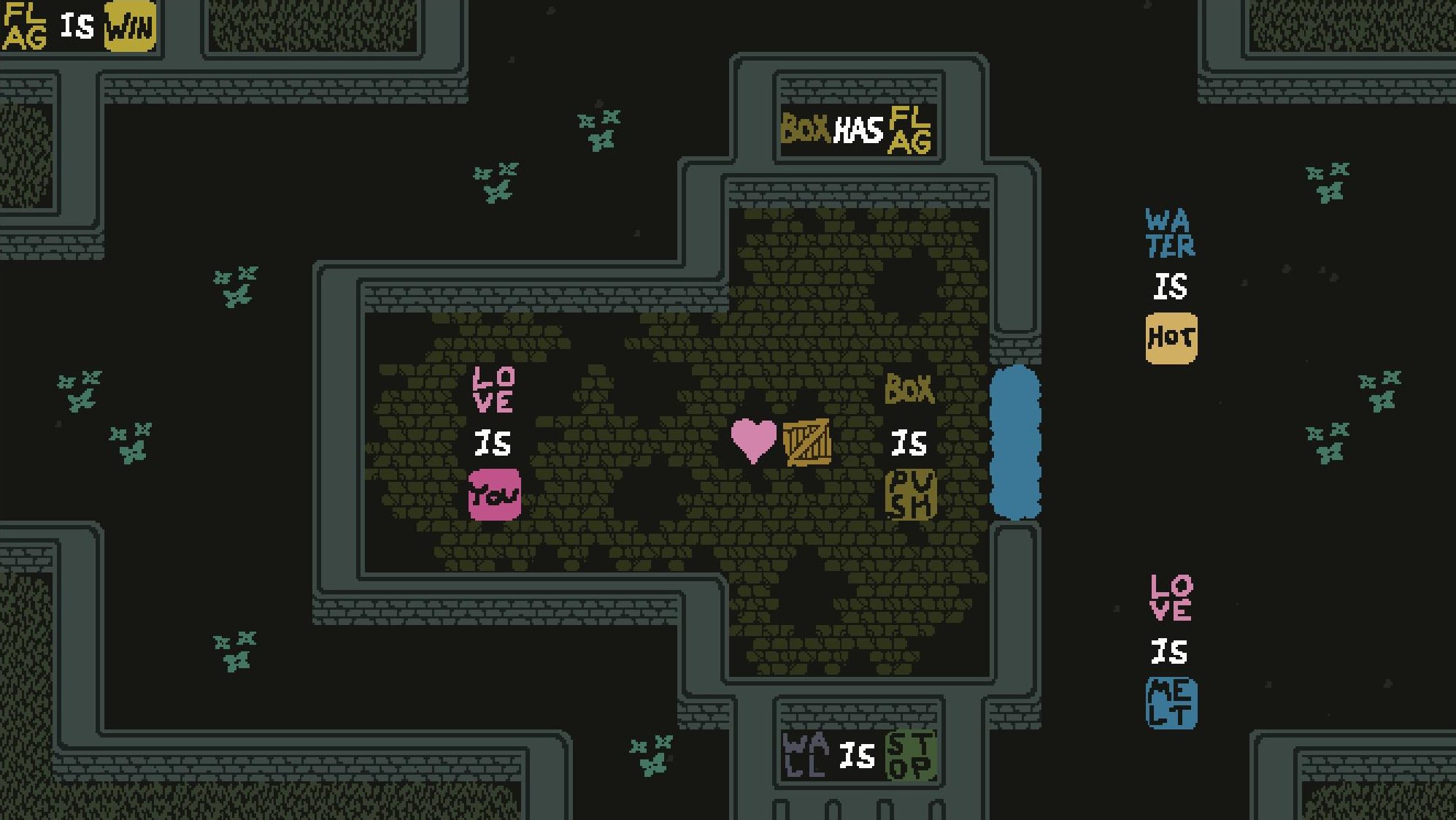 With so much variance possible, there are definitely multiple solutions to be found. I realised that when rewatching that trailer above, and seeing how the lava level was solved. They melted the lava! Clever! Not what I did. At a certain point, as I start devising absolutely bonkers methods of completing a puzzle, I'm certain that there must be more simple, elegant methods available. But at the same time, the sense of victory when my cockamamie technique works is just enormous. I don't mind telling you just how proud I felt when I managed to solve Wireless Connection (Island-9).

The farther you go, the more complexity is added, as you'd expect. Along with Baba there's also Keke, and who you control is very much up to the syntax at any point. Things can float, characters can be holding objects, items can be open or shut, and so on. But it's added with a careful hand, so it never feels overwhelming. 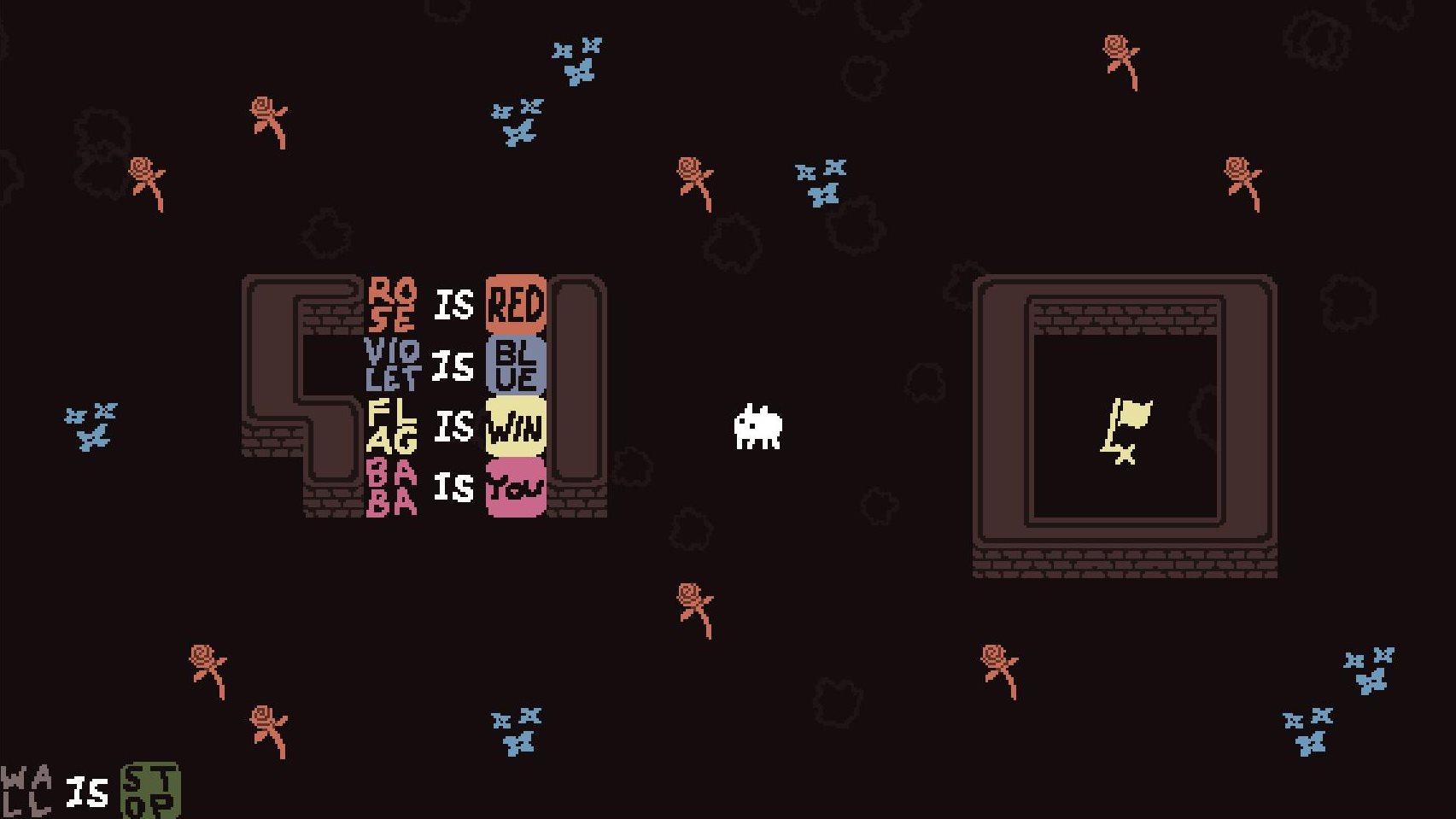 I think one of my absolute favourite things about this, beyond being a completely original and utterly brilliant puzzler, is how meticulously balanced it is in terms of offering progress. The difficulty curves up in each set of levels, getting pretty steep toward each groups' end, but it unlocks the next set before you've completed them all. The difficulty of the next group dips back down again as it also introduces new rules, meaning that even if you've become completely stuck in one place, there's likely somewhere else you can continue playing. Offering both super-difficulty and progress is all too rare, and something to celebrate. (And of course, now the game's out, you'll have the luxury of being able to watch other people provide hints for puzzles. You lucky things.)

In fact, it's sublimely refined in every respect. It understands the player, letting you reset a screen with a single button, never penalising you for undos, and even lets you switch off its wibbly-wobbly graphic effect if it starts to drive you potty. Tiny details, but too often missed, that show a lack of vanity on behalf of the creator. 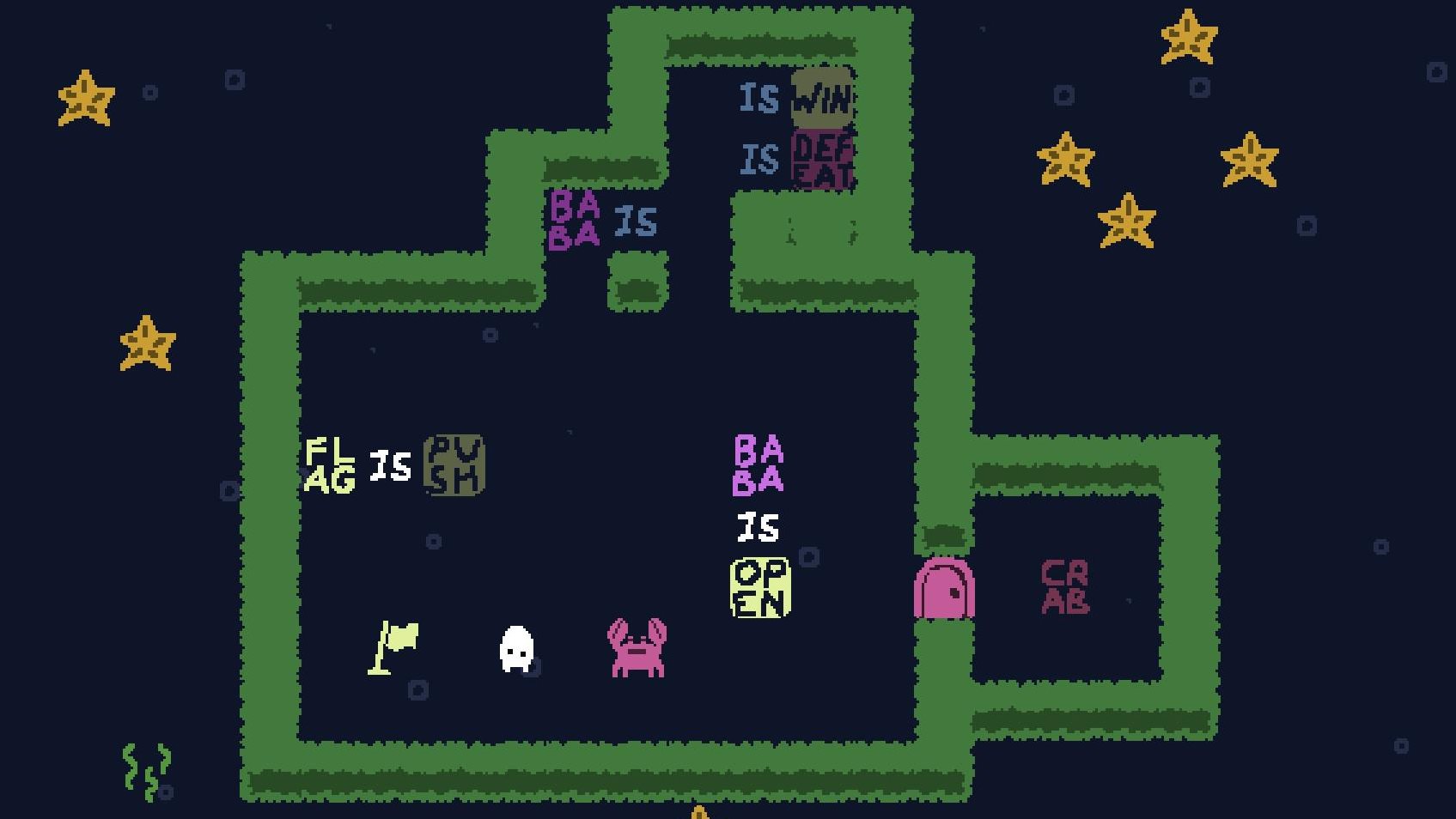 I'm not going to pretend to have finished it. I'm hoping this is a game I'll keep playing for a long time, picking away at puzzles, and then desperately hoping for extra levels to be added later. But this is wonderful. Completely wonderful. Original, inspired, challenging, and most importantly of all, that constant sense of "Oh no, how will I ever do this one!" so quickly followed by, "I AM A GENIUS!" It's a very, very smart game, that has the humility to let you, the player, feel like the clever one.