They say the best meals start with the finest ingredients. For example, if you take a freshly bought Pot Noodle, add a splash of boiling water and a soupçon of sachet sauce, you have a tasty meal for the bachelor in a hurry. Trinket Studios' Battle Chef Brigade is a little more omnivorous, and a lot more ambitious, drawing from puzzle games and anime and reality TV in a way that, perhaps, should result in a steaming mess. It's not a steaming mess, I'm happy to report, even if a couple of the ingredients do feel a little underdone.

Set in a bright and cheery fantasy world that, nevertheless, is full of monsters, Battle Chef puts you in the role of a young cook named Mina Han, who dreams of leaving her podunk town and joining an elite academy in the city's capital. That's the Battle Chef Brigade of the title: a cadre of elite troops that will a) clear out pesky creature infestations, before b) turning the resultant creature bits into a hearty lunch. It's not clear who ultimately enjoys these fancy meals, other than a procession of picky judges, but at least all those wings, giblets and eyeballs aren't going to waste. 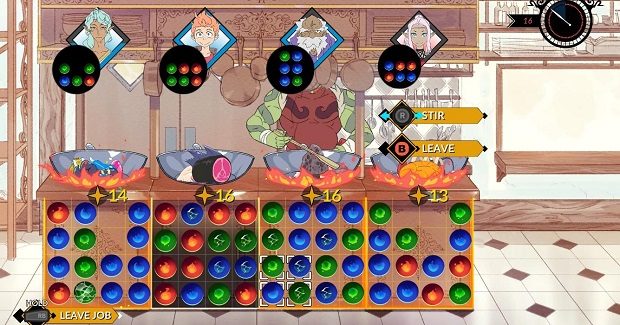 Actually getting into the prestigious academy is easier said than done, of course, and it's Mina's struggle to complete the proving tournament that forms the heart of this surprising genre mash-up. With its likeable cast, and its focus on the rigours of joining a military institution, the story reminded me of the terrific Attack on Titan (you know, that anime with the naked, murderous giants). I became pretty attached to Mina and her assorted friends, rivals and tutors through the roughly ten-hour adventure: a sizeable cast that includes a soppy orc, a punky necromancer, and a misanthropic, lovelorn hunter.

You're not going to be exploring an entire world in Battle Chef. The scope is actually quite small, primarily encompassing the city itself, with occasional sojourns to your hometown, or to a supposedly deadly nether-realm introduced later in the story. In the city, you'll chat to NPCs, buy new equipment, practice your cooking abilities, or take on odd jobs that test your puzzling, platforming and time-management skills. However, all of that's a side dish to the game's main course: a series of tense duels against rival battle chefs. 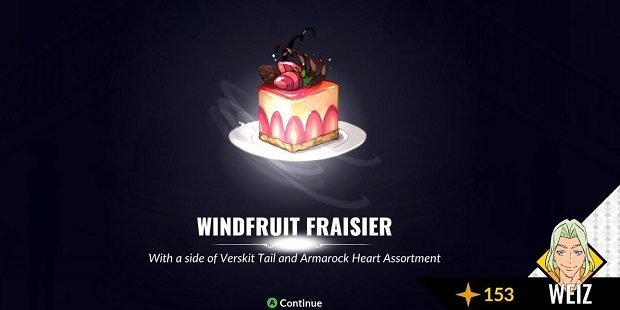 Imagine a one-on-one MasterChef, where Gregg Wallace has been replaced with an orc gourmand, and John Torode is now an elven alchemist with a penchant for fiery dishes. Rather than having the ingredients right there in front of them, the contestants first have to rush out of the kitchen and batter monsters for a good few minutes, hoovering up their innards for use in the cooking process. This part of Battle Chef resembles a sidescrolling platformer, and as Mina you have a couple of magical abilities with which to clobber slimes, rabbits, bats and so on against the clock. I say 'against the clock' because each duel comes with a strict time limit, during which you'll need to both gather resources and whip up one or more gourmet meals.

These platforming bits are fairly enjoyable in their own way, although I doubt they'd stand up on their own, shorn from the more fully fledged cooking sections you're generally rushing back to. The combat feels punchy and slick, but the animation – as in the rest of the game, for that matter – is a little rigid. Happily, Battle Chef sings once you've gathered enough monster bits and ferried them back to the arena. 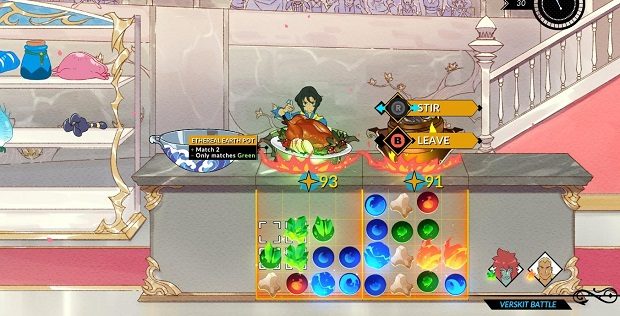 Approach a cooking pot (you can have up to three on-hand at a time) and, suddenly, this is a match-3 puzzle game. Once an ingredient is dropped into a vessel it transforms into a blob of 'taste gems', with each of the primary colours representing a specific type of food. Red gems equate to fire, green to earth, and blue to water, and when three of each colour are matched the gems will be 'promoted', meaning they'll turn all nice and glowy like. Not only will your food look more enticing, but your meal will earn more points as a result.

The type of grub you ultimately make depends on which gems you scatter into the cooking pot. Mostly blue gems will result in a water-themed dish, while a mixture of green and red will grant you a meal with earthy, spicy flavours. It's vital that you pay attention to your ingredient choices, as more than simply making a good meal you're trying to impress one or more harsh judges, each with their own favourite kinds of food. You'll also be rewarded for fulfilling the competition's theme, by including ingredients from a specific monster, fruit or vegetable. Once the time limit is up, and you've presented your dish or dishes, the contestant with the most points will be declared the winner.

If all that sounds complicated, then I'm sorry but you don't know the half of it, as the system is eventually embiggened with the addition of bone gems (match these to create a multi-purpose rainbow gem), poison gems that corrupt meals, and fragile gems that will shatter if they're rotated too many times. Meanwhile, consumable sauces will convert gems to a different colour, and certain pots will endow your ingredients with special abilities. It's a lot to take in, but thankfully you're given enough time to get to grips with each mechanic before the next is dutifully introduced. 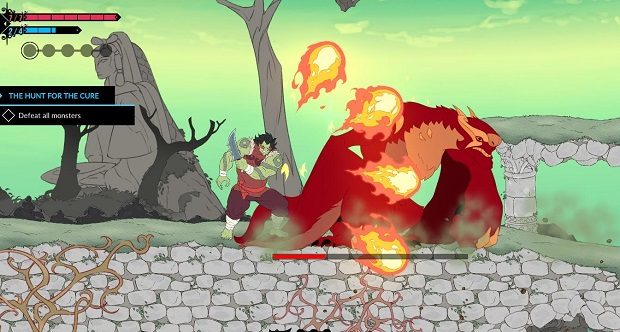 There are around a dozen of these tournament matches placed throughout the adventure, and while in many cases you can choose your next opponent from a handful of competitors, this remains a doggedly linear game. That's not necessarily a criticism (Battle Chef has a story to tell, and it tells it well), but I don't see much reason to return to this once you've finished that story – and that feels like an oversight in what is ostensibly a match-3 game, a genre known for its ability to devour your free time. The Daily Challenge mode offers a set rumble against other players' leaderboard scores, and you can play standalone minigames from the main menu, but there's no 'Endless' mode to really let you focus on the match-3 mechanics, which are undoubtedly the best part of the game.

It might not fully satisfy match-3 fans, then, but this is still a delectable puzzler wrapped in an engaging fantasy story, served with a side of so-so platforming. It's with great skill that Trinket Studios has managed to make that unusual combination work at all, even if I'm left longing for a more developed follow-up that makes the most of every one of its inspired ingredients.

Battle Chef Brigade is out now for Windows and is available via Steam for £15.49.