EA's fully armed and operational microtransaction station has fallen, for now at least - but in-game payments will return to Star Wars Battlefront 2. The sci-fi FPS has been making headlines for all the wrong reasons over recent days, due to the inclusion of a paid loot crate system that, many felt a) gave people who paid an unfair advantage and b) was arranged in such a way as to unduly coax people into repeatedly paying.

It's a story that has eclipsed the release of the game itself. And that's apparently the reason behind EA's unexpected announcement that they're turning off SWBF2's microtransactions.

"We've heard the concerns about potentially giving players unfair advantages. And we’ve heard that this is overshadowing an otherwise great game. This was never our intention. Sorry we didn’t get this right.

"We hear you loud and clear, so we’re turning off all in-game purchases. We will now spend more time listening, adjusting, balancing and tuning. This means that the option to purchase crystals in the game is now offline, and all progression will be earned through gameplay."

It's nice to hear a straight-up "sorry" - that's a rare thing for a big games corp to do. But I guess they know that community goodwill is an essential part of a successful multiplayer game, and they need to change the whole mood around SWBF2 if it's to be the mega-hit they expected it to be.

However, "all progression will be earned through gameplay" is a double-edged sword - a lot of the complaint has centred around the fact the unlocking stuff the old-fashioned way in SWBF2 involves a hell of a lot of grind. No changes to that are mentioned, so we have to presume that it will remain a long-haul to get all the kit and characters you want. At least it's a level playing field now, but it might remain a somewhat grim one.

Also in the mix is Venturebeat's report (unverified as yet, but they're not a site that tends to be spurious in their reporting) that Disney boss Bob Iger yesterday called EA boss Andrew Wilson to talk about this specific controversy. 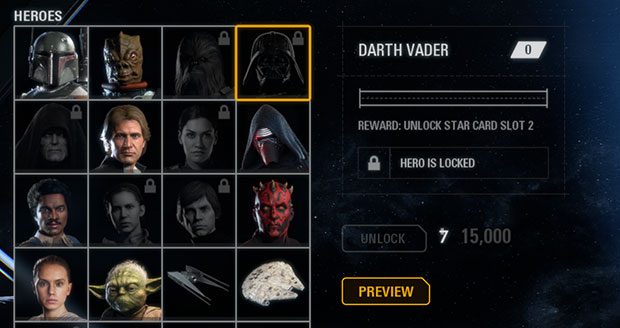 I'll admit to having been guilty of a degree of fatalism about this stuff - that this was one of those oncoming storms that online protest couldn't stop, as it didn't (or at least not until a year later) with SimCity's always-online DRM, and more broadly the likes of pre-order bonuses, season passes, dopamine-exploiting unlock systems, non-random microtransactions, hats and every other Big Videogames sinister monetisation strategy that we've worried about over the years.

I'm very happy to have been proven wrong in this instance. But let's not lose sight of the fact that, as I'll come to in a moment, this is a suspension, not a withdrawal, of SWBF2's in-game payments. And, I am quite sure, EA flipping the microtransaction lever to 'off' is more to do with concern that SWBF2 won't meet their lofty sales target unless the story around it changes than it is a heartfelt realisation that they went too far this time.

Where I shall allow myself to be optimistic is on the matter of precedents set. The fear was that a successful microtransaction-infected SWBF2 would only inspire other big publishers to adopt similar stances. The hope now is that a disastrous launch week (in terms of buzz - no idea about sales) will send other firms' money-folk back to the drawing board on this stuff.

Paid loot crates are a doubly pernicious concept - both the element of paying extra for boosted power/abilities/progress within a game you already bought and the blind bag element which means you never know what you'll get.

That latter is something which has had online commenters, politicians and experts alike expressing concerns that loot boxes could be uncomfortably akin to gambling - though, both legally and ethically, that's a question which will likely continue to be explored over the months and years to come. EA have insisted that the crates "are not gambling", saying they're not necessary to succeed, they can be earned without spending money, and they are guaranteed to contain something. As the father of a young child, I have spent far too many trips home from the supermarket listening to wracking sobs and desperate begging because the £1 random toy machine outside the checkouts coughed out the wrong plastic dog - so I certainly consider paid crates to be manipulative, at the very least. 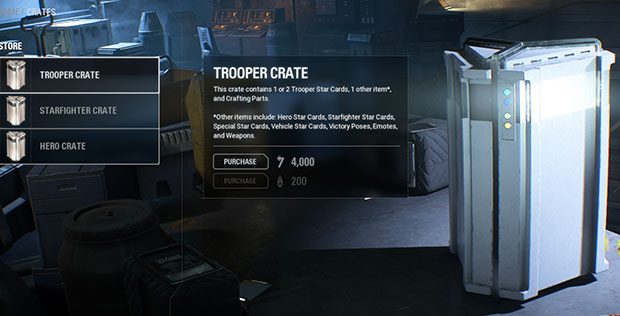 It is heartening to see that paid loot crates are not going to get a free pass after all. However, this is not the end of microtransactions in SWBF2. Write EA DICE:

"The ability to purchase crystals in-game will become available at a later date, only after we’ve made changes to the game. We’ll share more details as we work through this."

(Crystals are one of three main currencies in the game, and the one that can only be bought with real money). What they don't specify is whether, when they return, they'll be used to buy random loot crates again, or as a means of more directly buying some in-game thinger you're craving.

Of course, the question now for EA is whether this is enough to change the messaging around what was intended to be their biggest game of the year. When a celebrity makes a fulsome apology for past misbehaviour, does the story then go away? I'm not convinced that SWBF2 now has a clear run to the thermal exhaust port.

If you just want to steer clear of all this nonsense, there's always solo campaign mode, but, as Matt found in our Star Wars: Battlefront 2 singleplayer review, it's pretty middling.