It's odd to think of Mickey Mouse while ordering a giant robot to rip another robot's arms off, but in the words of its creator Jordan Weisman, Battletech is kind of like Walt Disney's Tomorrowland. Opened in 1955, the park was an homage to the march of science that inevitably struggled to keep up. Its present-day incarnations are a bizarre mishmash of the vintage, the cutting edge and the merely obsolete, Flash Gordon-brand retro colliding with touchscreens and VR. Similarly, Battletech is a vision of human history up to the 31st century that began life as a table-top strategy game in 1984, made up of once-outlandish concepts such as artificial muscles that now seem positively quaint.

The series wears its age more gracefully than Tomorrowland, however, because its campaign is as much about obsolescence and forgetfulness as the far future – a re-imagining of the fall of the Roman Empire and ensuing “dark age” that rebuts the concept of history as a steady, linear advance. It's a solid footing for a strategy sim in the vein of Total War, comparable to Warhammer 40K's Imperium but less, well, preposterous, though I still think the turn-based battle system Adam sampled in June is Battletech's strongest asset. 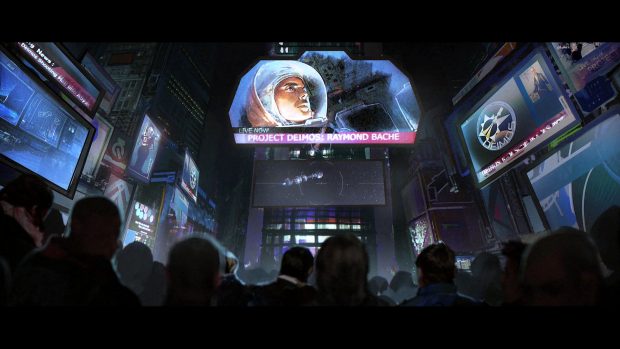 The base campaign starts you off as captain of a mercenary mech outfit in a galactic backwater, tasked with paying off a bank loan so that you can venture out into more lucrative regions of space and enmesh yourself in the squabbles of various ancient noble houses. The game is set in 3025, following the collapse of the illustrious Star League and three bloody wars of succession, with much of the older tech in operation now beyond the science of the day.

This premise lends a certain workmanlike charm to an otherwise unsurprising core loop of travelling to planets, taking on missions and overhauling your ship, crew and mechs. If you want to warp to another star system, for instance, you'll need to factor in how long it'll take your battered Leopard-class starter vessel to chug to a jumpship. Your funds will continue to deplete in the process, so it's possible you might reach the destination without the means to pay your mech pilots or take on vital replacement crew. In battle, meanwhile, you'll find that salvage is often worth more than cold hard cash. If you spot a mech with a rare League-era arm cannon, for example, you'll probably want to keep that arm in one piece by firing on the target from the other side. 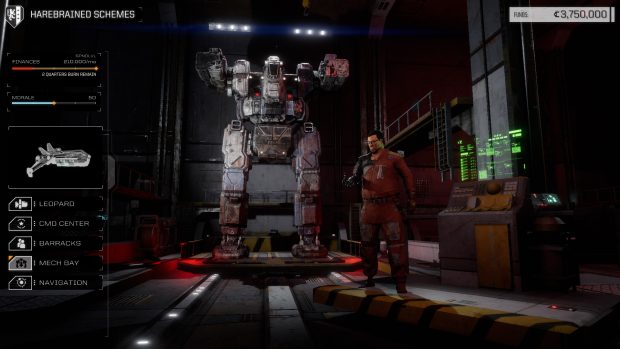 Battletech's mix of rickety, venerable gizmos and a sprawling cosmic theatre naturally owes a lot to the original Star Wars. “I was a teenager when that came out, and the first couple of moments are just completely mind-blowing, oh my god what's going on, walking robots and giant spaceships!” Weisman recalls. “And then you're in a kitchen, and you're like, oh I know that. I've been in that scene, with my parents. You have to create that foundation, you have to create something people can relate to and then bring in the exotic from there.”

If grounding flights of fancy is a familiar sci-fi concern, Battletech's theme of regression also draws on Weisman's time with the real-life navy. “During my limited college career in the United States Marine Academy studying to be an officer on commercial ships, one of the things I learned was that we can't produce a ship's hull with the level of friction that we had in World War 2. The welding techniques that produce low-friction hulls have been lost. They were making so many ships that they had to develop these techniques, and then we didn't make ships for a long time, and those people all retired. So even in amongst constant evolution, we lose things, we lose knowledge.” 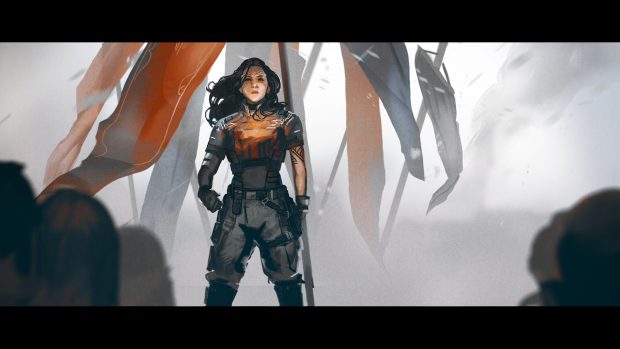 Time and cash aside, Battletech's broad overarching campaign dynamics are morale, which is tracked by individual ship crew member or mech pilot, and faction reputation. In addition to four preset base traits (loosely - ranged accuracy, mobility, resilience and perception), pilots unlock valuable battlefield skills with experience, so keeping veterans happy by bumping up their wages is important, though in the event of a departure you can always find fresh meat at hiring halls on each planet. Pilots also come with origin stories that affect the proceedings in little and large ways. Employ the scion of a noble family, for example, and you can put his or her contacts to use when soliciting new missions.

Faction rep, meanwhile, broadly determines the quality of mission you'll be offered and the size of your payout. There's a haggling system that lets you adjust the ratio of cash to salvage to reputation gains per sortie: if you're desperate for one particular group's affection, you can even offer to work for free. Lest all this seem too much a question of fiddling with sliders, there are also semi-random multiple-choice story events that may affect crew morale and reputation. One example I'm shown involves stopping two underlings killing each other over the last cup of coffee. You can divide it up between them, tell them you've got bigger things to worry about, or down the cup yourself in a fit of alpha-dog posturing. A minor incident, for sure, but one that may haunt you on the eve of a major battle when your ace mechwarrior ups and quits. 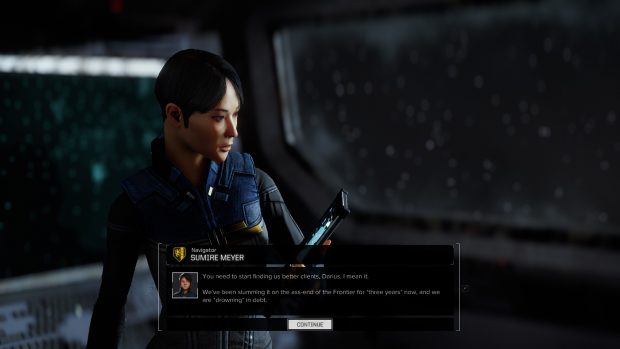 When not soothing egos and balancing the books, you're going to spend most of your time outside combat tinkering with your mechs - each a gorgeous blend of World War clunk and the sleek proportions of a Macross figurine, comprising a maximum weight allowance and a number of hardpoint slots per limb. There's scope for quite the range of builds, from insectile, evasive flankers armed with artillery pods and jump jets, to broad-shouldered heavies who are designed to push through concentrated turret fire without losing their footing. You'll need to allow plenty of time to carry out these overhauls before undertaking a mission, however: nothing screams “amateur” like accepting a tough gig only to find that your star robot is still having its legs reattached.

The most intriguing flourishes in construction are stability and heat management, each of which keys into the wider pressure to salvage choice parts. Most energy weapons inflict barely any knockback, but will overheat the victim faster, ultimately forcing a shutdown and rendering it susceptible to surgical limb shots. Projectile weapons will bowl mechs over much faster, again allowing you to shoot at individual components, but dish out much less heat. Which tactic you favour will vary according to the planetary biome underfoot: when defending a base on a waterworld there's less need to worry about the temperature, but if you're escorting somebody through a desert you might want to detach launchers that generate lots of heat when fired. 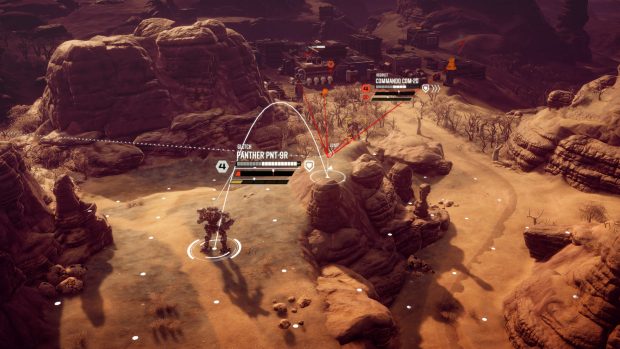 There's a main story arc buried in amongst the game's dozens of star systems, involving the restoration of a usurped princess (a tale told via lustrous 2D art with animate touches). It's one of many, many stories Weisman and Hairbrained Games might unearth from or weave into Battletech's 30 years of world-building, whether in the form of updates or, touch wood, sequels. Weisman is enthused by the prospect of a Battletech equivalent for Paradox's legendary feud 'em up, Crusader Kings. “I do think there's a very interesting game to make there,” he says. “I wrote a version of Battletech for tabletop called The Succession War that was at that kind of global, geopolitical level. That would be a classic Paradox gambit, to do Battletech at that scale.” In the shorter term, there's the possibility of an expansion themed around the return of the Clans, Battletech's equivalent for the barbarian hordes who brought down Rome. 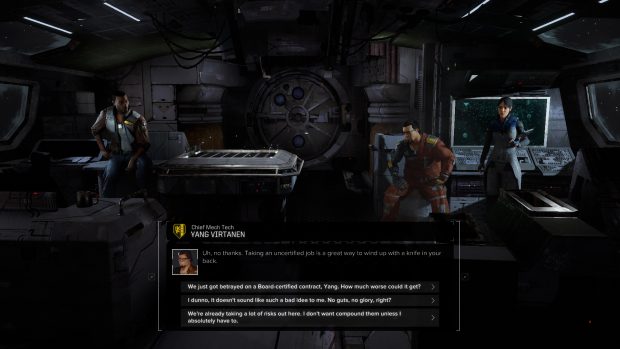 If, like me, you're mostly familiar with the Battletech universe care of the MechWarrior spin-off games, you may be shocked by the sheer amount of ground there is to cover. This is a vast and engagingly ramshackle fiction, encompassing over a hundred spin-off novels and dozens of tabletop and computer games, all of it funnelled into the mournful spectacle of massive, ancient, rickety robots laying each other out for the count. I'm not sure the new game's campaign options can match the volatility and variety of XCOM or the later Total Wars, but the battling continues to be excellent, and while I've picked over the spoils of imploding empires in many games, this is among the few that really explores the premise at the level of systems and tactics. Tomorrow can wait.

Battletech is due for release in 2018.