Beast Battle Simulator [Steam page] is what I’d call a Joke Game, invented to provoke a single snort of laughter as you scroll over silent videos during your tea break. It’s more or less identical to Ultimate Epic Battle Simulator, in that you pit groups of AI-controlled beings against one another, then sit back and watch as they fight. Except this time you can strap bombs to the penguins and make them play football against a team of grumpy giraffes.

Here’s some fights I made happen.

A hundred dogs vs one tank 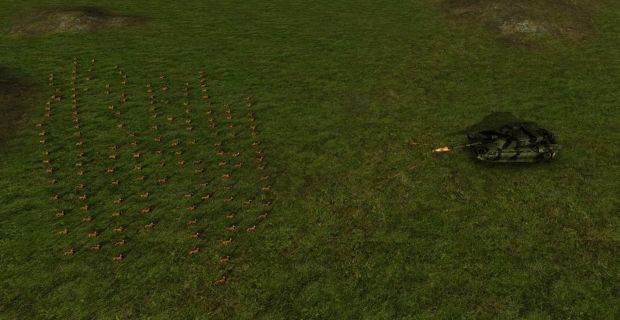 I’m not sure why I did this. The gang of dogs either concluded that their best chance of survival was to rush the armoured vehicle, or they were simply very enthusiastic about meeting a tank. Whatever the case, they ran toward their enemy with such gusto that many were killed upon first contact. Ie. dozens of good boys were crushed beneath the treads of a powerful war machine.

Surprisingly, this didn’t dampen their canine morale and they continued to chase the strange metal creature around the grassy plains, barking at it in a way that can only be described as “a normal dog barking noise”. At this point the tank was firing both machine guns and its primary cannon, but still a handful of the hounds remained. This last wave of doggy resistance was only defeated after running into the tank’s armour head-first and crushing their own skulls with the force of impact. 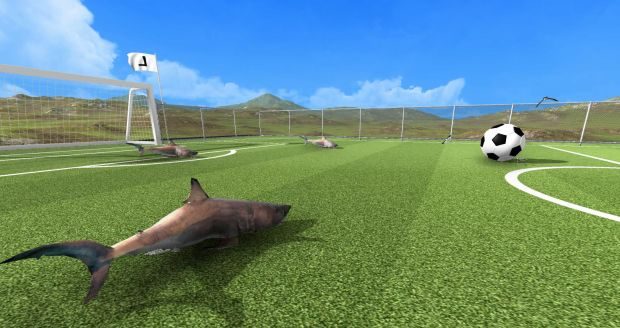 Now this is interesting. The sharks are seemingly at a disadvantage, being aquatic animals, but the seagulls are vulnerable and weak. For some reason, I believe the gulls to be so outmatched in this face-off that it’s only fair to obstruct their goalposts with a pile of crates.

But as soon as the whistle blows, the victor becomes clear. The great whites, lacking the maneuverability that has been historically granted to creatures with feet, could get neither the strength nor the momentum to proceed into their opponent’s side of the pitch, instead opting for a “flailing wildly” strategy. The birds, meanwhile, flew chaotically toward the ball at any given opportunity, with no concept of teamwork but with an admirable amount of energy. In the end, it was enough that they moved swiftly, driving the ball repeatedly into the goal area. At one point, a seagull was eaten alive and I thought the sharks could make a comeback. But, if anything, the death of their midfielder simply made the seabirds more efficient.

Result: 3-0 to the seagulls

War Hippo vs a battalion of ostriches 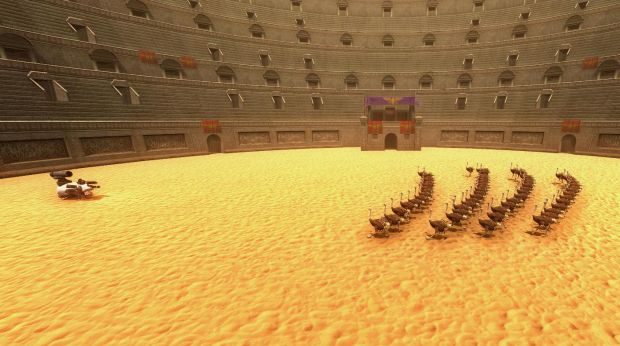 The sun rose high above the old coliseum that day, and the hippo knew his Gods were with him. In front of him stood The Enemy. Endless droves of flightless birds, hissing, stomping, yearning for his blood. The ostriches had come. Their peoples had been sworn enemies for centuries, a grand animosity that had left Africa in ruins and which had almost wholly destroyed the hippopotamus population.

The War Hippo, as his foes called him, was ready for battle. He was the last of his kind, and although the odds were against him, he stood with a stoic grace, waiting patiently for the first talon to take a step forward. With his trusty cannon atop his back, he regarded the restless, gladiatorial mass of birds with a sad but determined eye. Also, he had flamethrowers, miniguns, lasers and a shotgun.

The ostriches charged. But the last hippo was ready, because his Gods were with him. 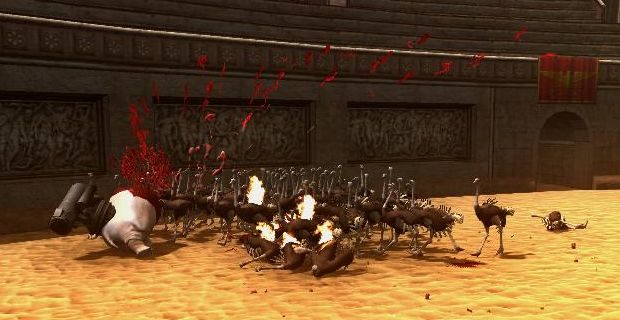 Beast Battle Simulator is on Steam for £6.99