If I had to choose a single incident to sum up my time in physics-y medieval build and destroy ‘em up Besiege, it would probably be the time I got 15 steps into its 33-part guide to making a plane, saw that it was asking me to access the “advanced build” menu, despaired for a second, and then realised that I didn't need a plane at all: I could do what I wanted to just by making a really tall, leggy mess of a thing. This was my quintessential Besiege moment for a lot of reasons, but the main one is this: Besiege lets you do a lot of very complicated things, but it’s actually a lot more fun when you’re just messing about.

Besiege is a game about building weapons and unleashing chaos. The campaign unfolds across a few dozen levels, each with a different objective. Typically this involves destroying something, be it person, animal, or building. But it can also be something more subtle, like navigating narrow mountain paths or stealing supplies. Each requires a different approach, and there’s little to no guidance offered on what that approach should be. Instead, it’s just you, the goal, and an utter maze of machine-building possibilities in between.

So you build. And boy does building feel good. The menu is unobtrusive but easy to navigate, and blocks snap together with a single, satisfying hammer clink. Testing your work against the objective and then jumping back into the build mode to iterate is as easy as hitting the play and stop button; any damage done to your rickety craft is immediately smoothed over, and you can get right back to work.

This build-test-iterate loop lends a compelling momentum to levels. Often that momentum can go somewhat off the rails, with an idea growing in complexity until the machine you've built is a Frankenstein’s monster, only loosely based on the original concept at all. This is excellent. And while it might often be more straightforward to start over and begin something new, there’s nothing quite like using over a hundred blocks to lift a single-shot cannon a few feet in the air in order to knock down a standing stone. 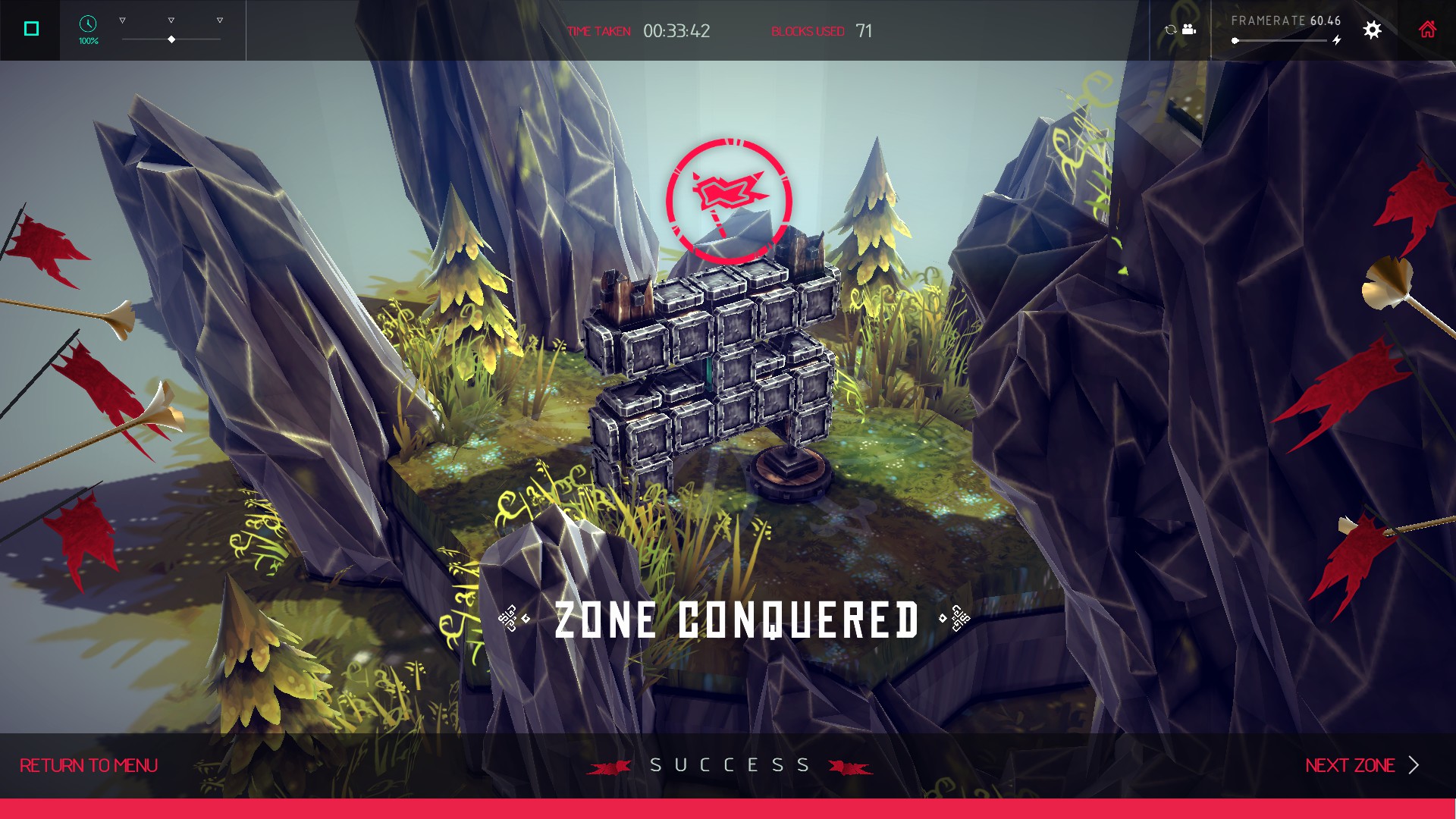 Increasingly chaotic machines also mean increasingly chaotic physics. Some of the chaos is maybe down to bugs, or at least unintentional interactions - like my machine that juddered itself to pieces within three seconds of switching it on, for unexplained reasons. The reasons don’t really matter, to be honest. Intentional or not, I found myself laughing out loud multiple times as things utterly backfired – sometimes literally. The time I spent painstakingly creating an obviously inefficient, twisted, and ugly weapon all set up the perfect punchline when the cannon fired itself out of the rear wall of the machine it was built in, tearing the whole thing to shreds.

To a degree, this kind of machine-based mad science is only possible because the game does so little to push you in the most effective directions towards the tasks it gives you. Still, it could stand to give a little more guidance. Many of the dozens and dozens of blocks available don’t have any immediately obvious applications, so I often felt like I was only playing with half the toolbox, even though I was more than willing to experiment. On the other end of the problem, necessary mechanics like steering are only explained in guides hidden away in the menu, and even after following them I often didn’t feel as though I totally had the hang of the trick in question. 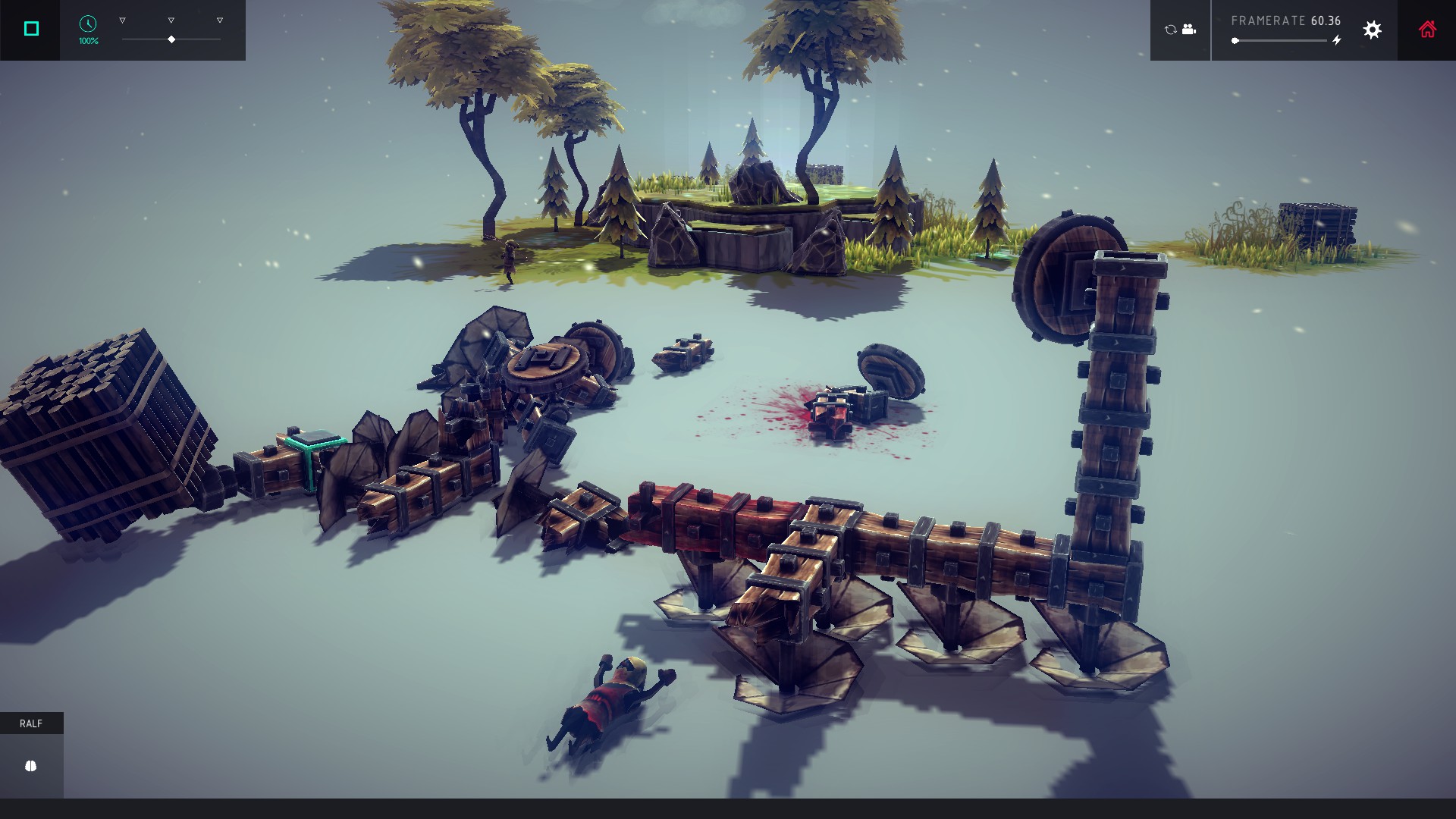 This is not to say that there aren’t an awful lot of people who do have a very good handle on Besiege already. It’s been in early access for five years now, and it looks like a lot of the current features were in place all the way back in February of 2015. That’s a long time in which to build a community, and Besiege’s has been utterly prolific in the mod department. There’s hundreds of thousands of pre-built machines you can crib with ease through its inbuilt mod integration, whether you’re looking for something simple that’ll cruise you through a certain level, or you just want to get weird. Not into the medieval style? Don’t worry, you can easily make it a game about fighter jets. Or Gundam. There’s also everything from new tools which make building easier, to fresh skyboxes, to mods that’ll turn the sheep all the colours of the rainbow.

I have to admit that I would never change the art style or setting of Besiege, though. It’s achingly pretty, in a way that at first seems bizarre given the objective is to rampage through it all and cause destruction. But progressing through the campaign, the delicate cottages and bobbing sheep, complete with the gentle sound of cowbells and quiet, slightly mournful music, started to make sense. What you are doing in Besiege is clearly not even warfare; most of what you’re rolling over is farms or cultural monuments, after all. In one level called “the Duke’s plea,” you crush (or stab, or explode, or whatever) a gathering of knights who are only trying to deliver a message, and don’t fight back. 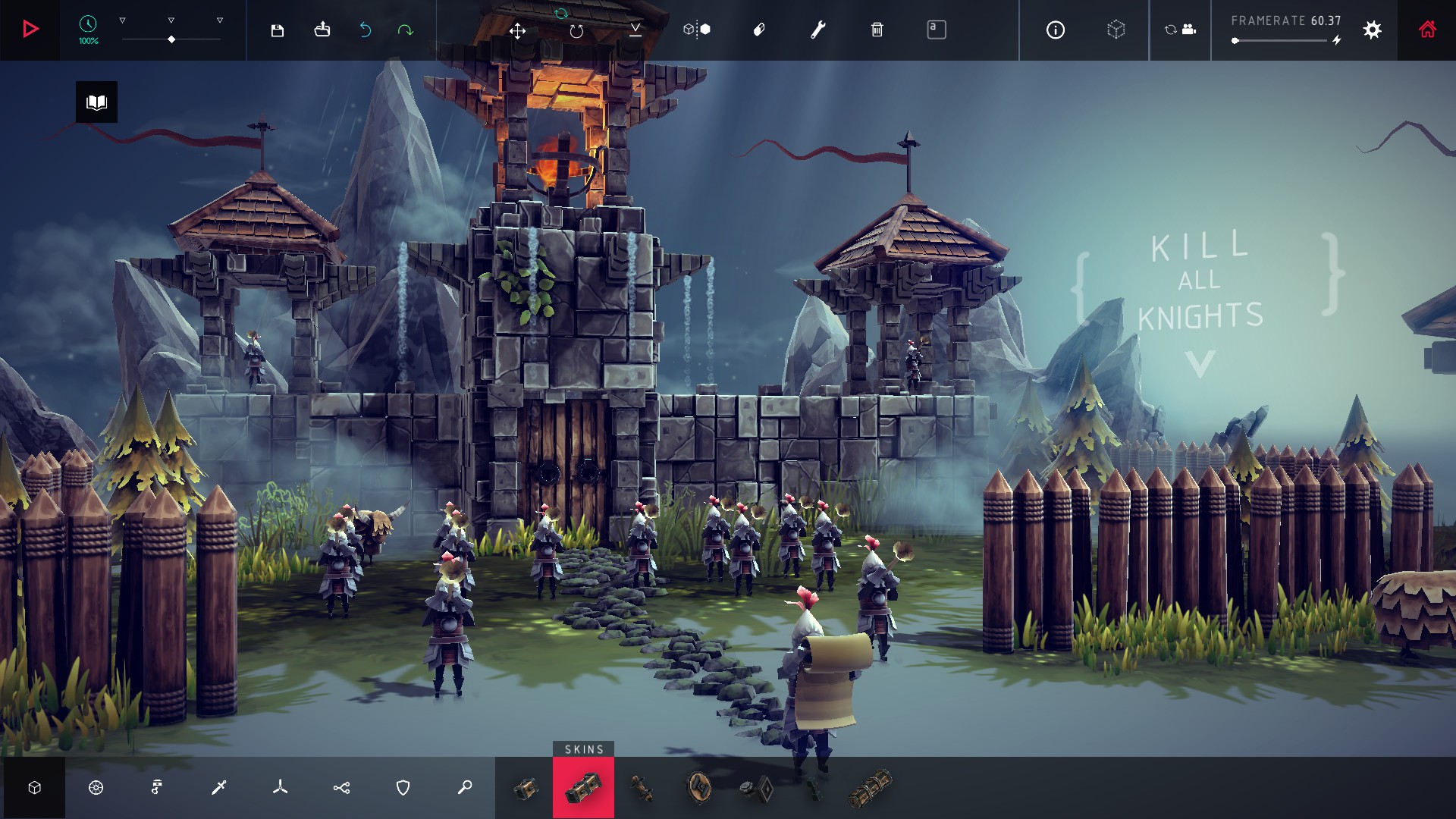 This did not ultimately slow me down in producing killing/mistake-making machines, of course. The only thing that gave me pause, in fact, was the determined “pop!” that sheep make when you run them over. And you’ll run them over a lot, because they’re hopelessly attracted to your builds, for reasons known only to their fist-sized, overenthusiastic, ovid brains.

If you’d rather avoid all that, mind, you can build your own levels, in a process which is just as straightforward and satisfying as machine building. That way, you can leave the sheep out of it. There’s also the eight-player multiplayer mode, which drops you and some pals into a free-for-all sandbox for more happy chaos, where you only have to think about the morals of destroying your friends’ machines and level creations. And I’m sure they have it coming.

While I’ve been writing this, I’ve still been playing Besiege, in a way. Ideas for new creations have been bubbling away under the surface of my mind, just waiting for me to hop back in and build them – presumably so that they can crumble immediately. At least that’ll spare some sheep.