Well, sort of. Let’s fix what we can at any rate. If CD Projekt Red did one thing right with their latest game, it was using an engine that people are comfortable modding. We’re not at a place where there are wholesale balance changes or complete UI makeovers, but there is a plentiful supply of menu tweaks, annoyances de-annoyed, and attempts at fixing vehicle handling. This list doesn't include the scary legs third-person mod, mind.

Since no-one asked, I’ve had some fun with Cybeyplonk. After a few hours, I mentally readjusted my expectations and decided it was basically just a Fallout game. That’s right, I modded my own brain, and it worked a treat. But to mod the game, here’s what you do.

All the main files will be taken from Cyberpunk 2077’s Nexus page. That includes the mod manager there. Leszek Pomian is working on the Cyberpunk 2077 Mod Manager, which should help automate everything for you, letting you pluck mods from a folder and load them into the game. As long as you know where you have the mod file, and what the game folder is, you’ll be fine. Point the program and both folders and then use the 'Add Mod' option.

And don’t worry, despite the opening animation of the program you’re not being hacked. If you want to skip that, hold down the Shift key while starting the application.

This has many ‘fixes’ for the game’s performance, including potential boosts for both Intel and AMD CPUs. Your mileage will vary with them, but I gained 10 FPS with it installed, hitting the heady heights of 49fps. Some might not gain any frames at all. Still, there are a few ancillary additions that let you turn off TAA, skip the start menu (no need to press Space to get to the first proper menu of the game), remove pedestrians and traffic (really that’s a drastic step) and unlocking a debug menu. There’s also a console with support for LUA scripting that’ll let you change other aspects of the game. For example, this collection of scripts will add “1056 clothing items, 250 weapons, 51 attachments, 218 cyberware, and 41 programs.”

It’s a reasonably technical mod, and as such comes with a wiki. 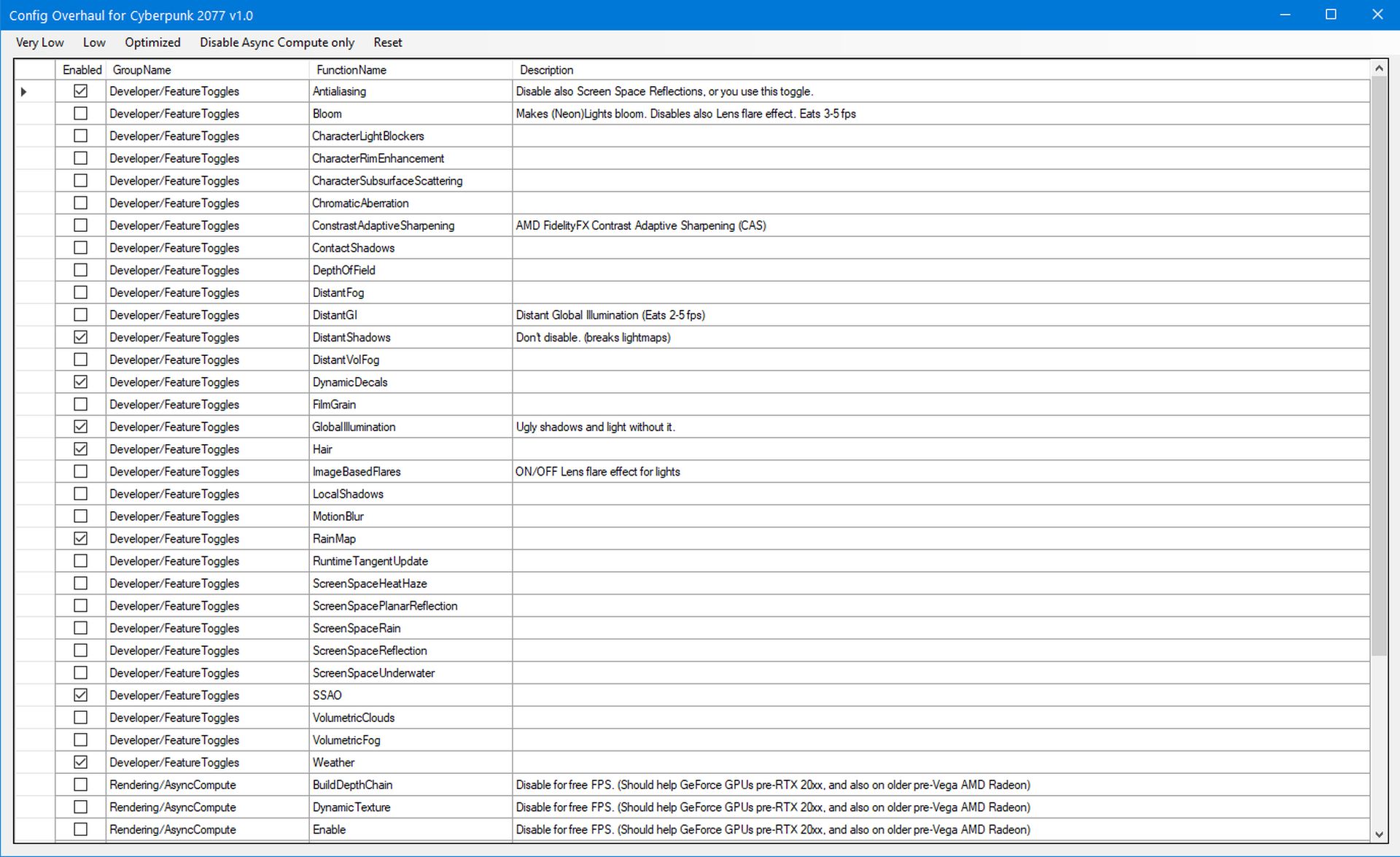 If you want a very targeted approach to changing your settings, including the vast number that are hidden, Config Overhaul will expose a huge number of variables for you to fiddle with and comes with several presets that’ll enable you to boost your FPS. I gained about 10 FPS setting it to medium. It’s easy to apply, and easy to undo with the press of a button, so there’s no real reason not to own it. Just drop the file into the game’s main folder and run it. 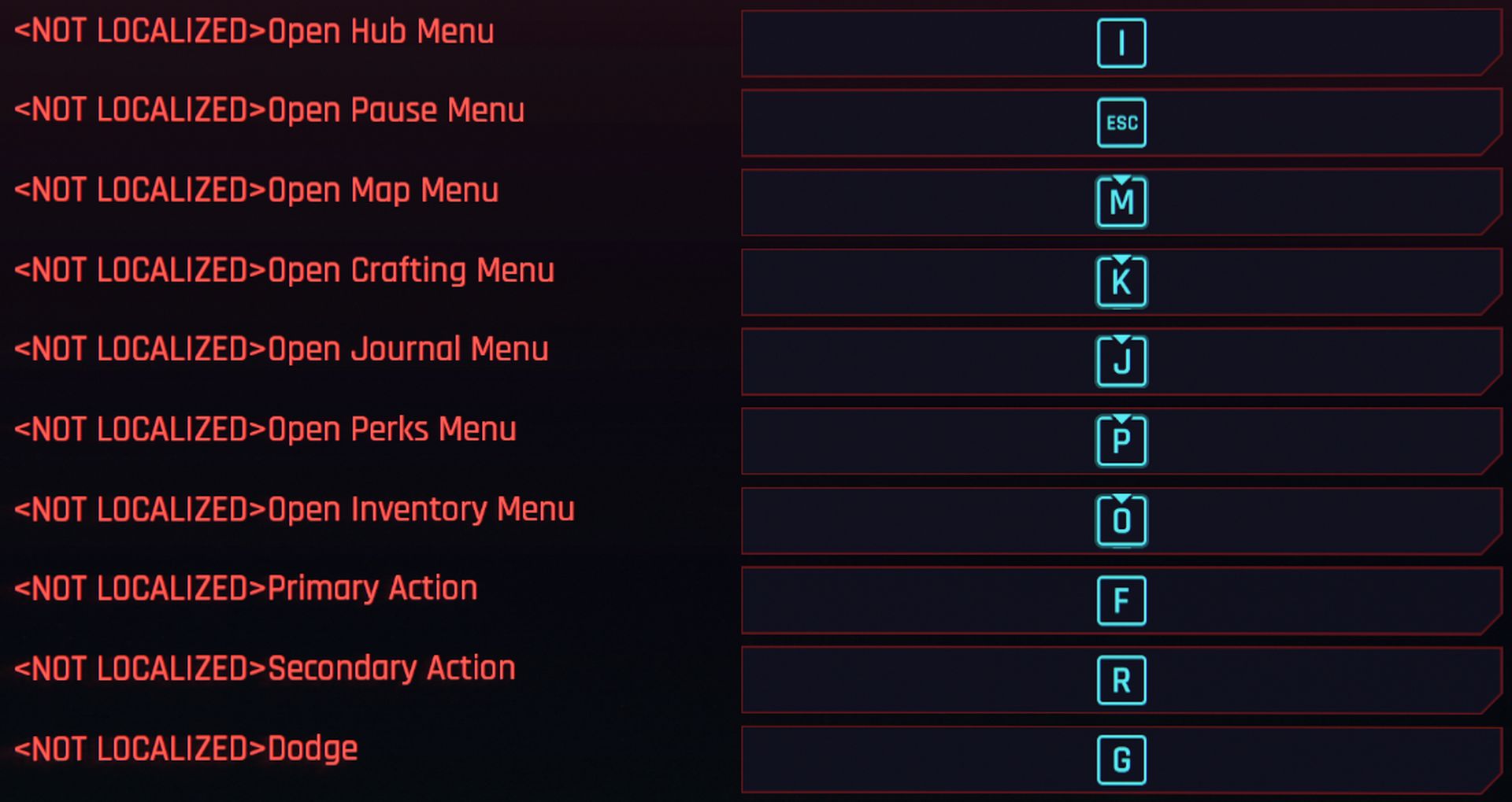 One of the more baffling decisions CD Projekt made was to hide away some keys from the controls menu, meaning players were stuck with 'F' to interact, and couldn't change how dodge worked. A whole slew of fixes came out for those, but Better Controls Menu works best, enabling you to rebind keys, bind slow walking, change how dodging works, and more. 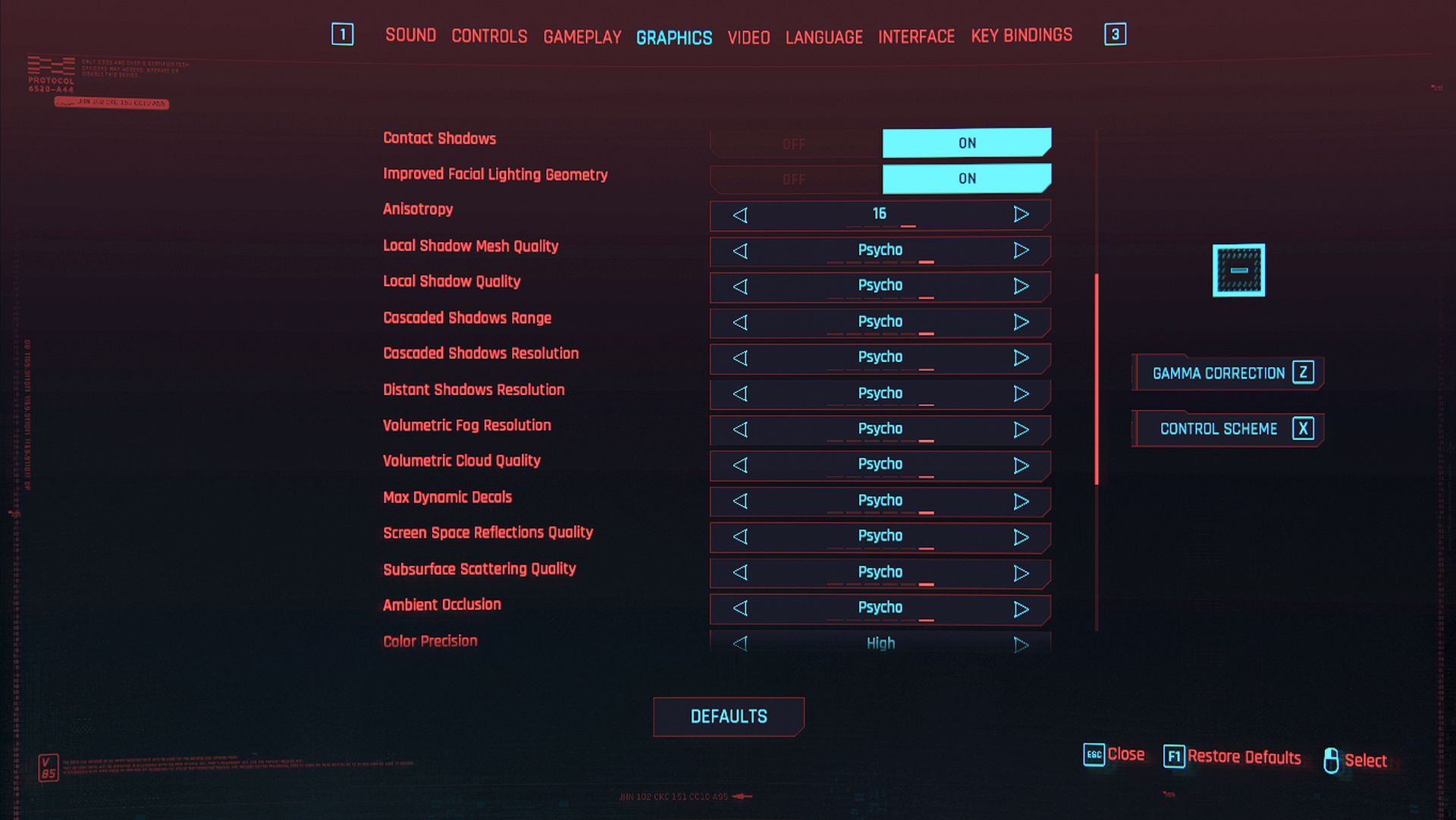 A nice companion mod to Better Controls Menu, this allows you to change the FOV scale, the mouse sensitivity limits, zoom range, and alter the resolution scale of the game. You'll need the additional files here if you have Better Controls installed. 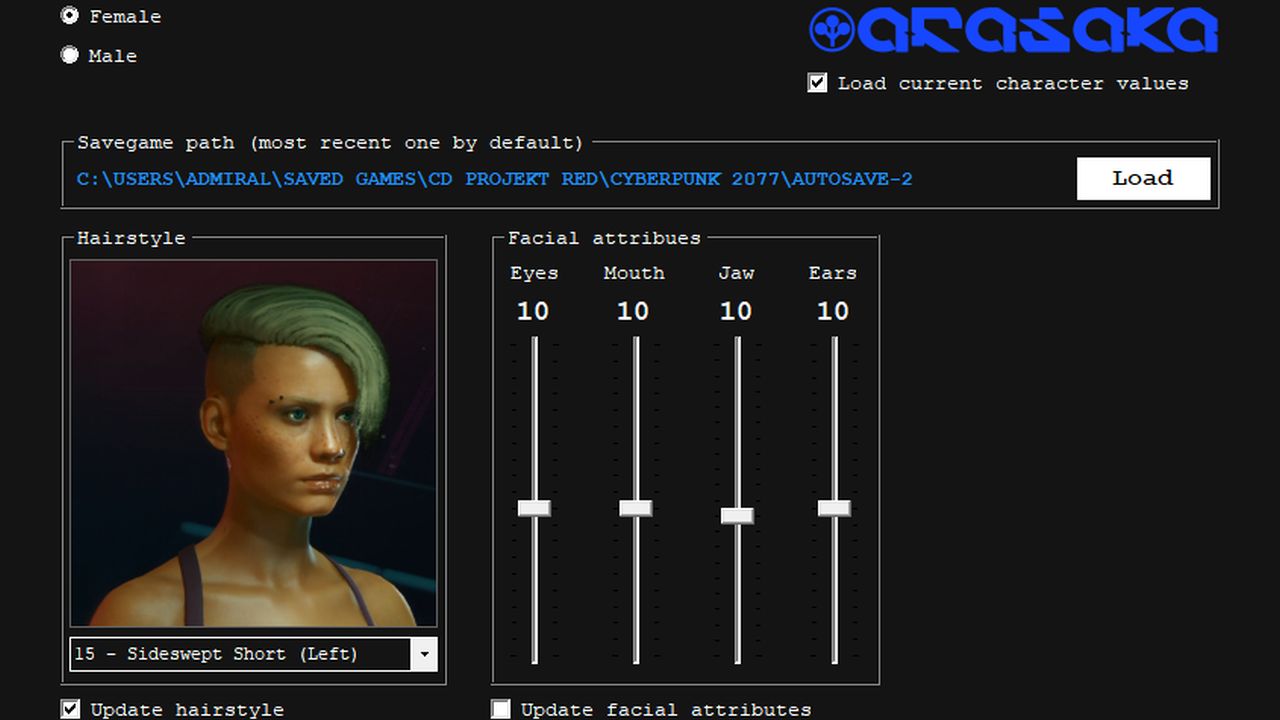 How V looks in the character creator vs how they look in the game is one of the great battles of our time. I spent an hour creating my usual ‘Buckie’, with a side-shaved haircut, interesting hair colour, and cool eyes. What I got was a sharp-featured terror that I thought I was stuck with forever. Arasaka Appearance Updater is a save utility that lets you select the various elements from the game in a GUI and will patch the character you create into Cyberpunk. It’s very hacky compared to what the game should be doing, but it works.

To use you need to direct it to your save file in your Users folder and then remake your char's face on the app.

Though there is no magic bullet to fix the meandering and brainless NPC behaviour, Alternate Crowd Behavior is an attempt at making them feel less stilted.

It alters many respawn timers, changing the AI respawn behaviour from anything from 5 seconds out of sight all the way up to 5 or 10 minutes. Each of these comes with its own issues: the 5 second respawn time means you're surrounded by new NPCs all the time, the longer respawn times can cause NPCs to walk back and forth along the same street.

The mod also enables busier roads and possibly makes NPCs search for you longer when you've escaped their line of sight. 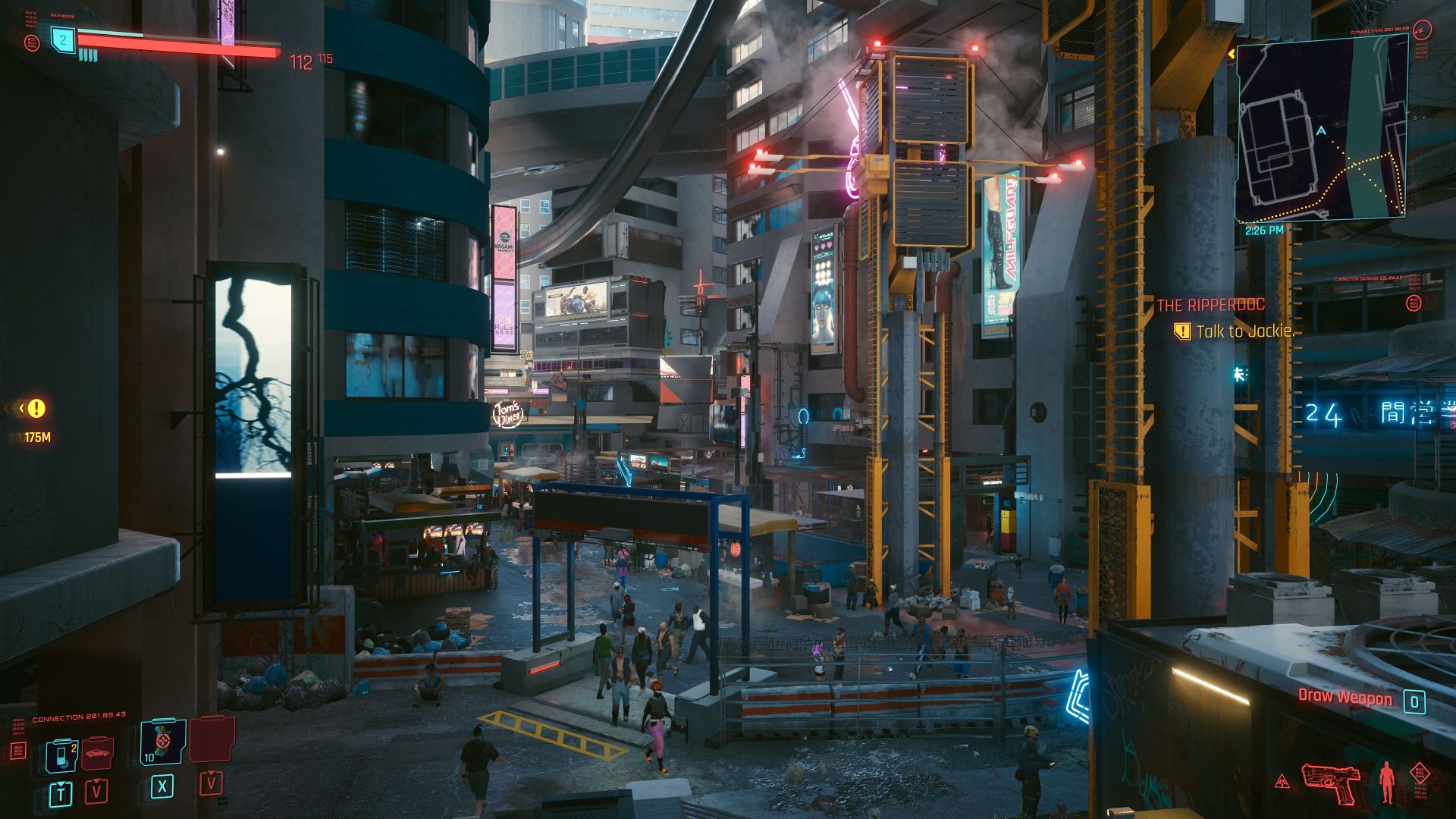 A very Craig-specific tweak. I generally crave all of the draw distance when playing open-world games. Then I demand more. Draw Distance Boost is a simple .ini file tweak that should make things in the distance just a little bit nicer. It's apparently dynamic and adjusts according to your settings. You can change the setting in the .ini file, but taking it over 50 will cause lots of flickering.

Drop the file into Cyberpunk 2077\engine\config\platform\pc\

Simplified Beverages and Food by andwhat112 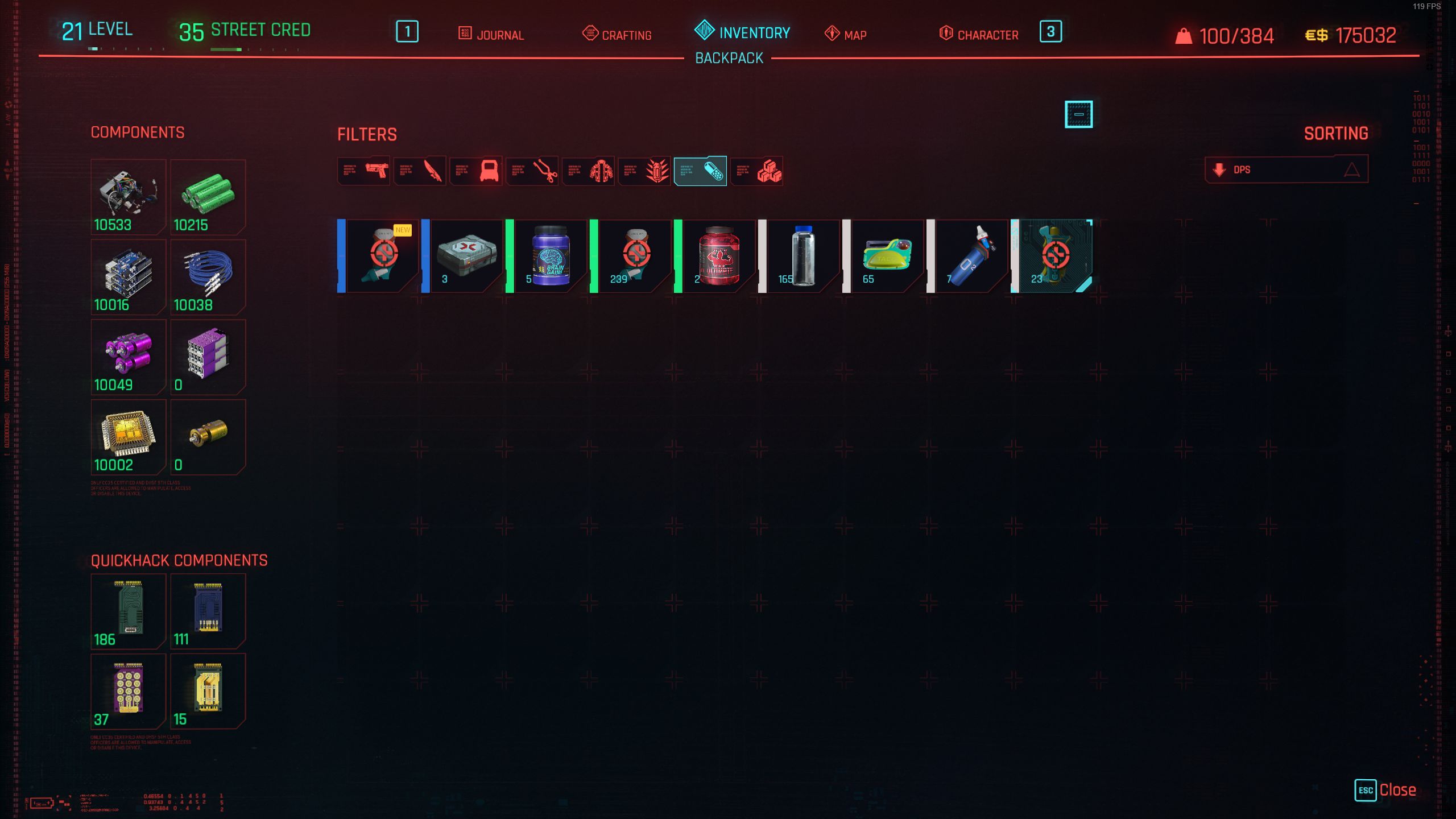 It was a while before I realised that my V was carrying the equivalent of a local shop's stock in her inventory. I had a baffling array of drinks and snacks, and honestly had no idea what I should be doing with them. So I just left them. But a quick run of Simplified Beverages and Food, and everything was fine.

It watches your inventory for any new food or beverage and converts it to water and tacos. That's it—no more piles of bizarre vittles to ponder. A few options in the file lets you tweak things further, so booze can either be automatically sold for $30 or combined so you can craft with it.

This one needs the Cyber Engine Tweaks mod above. When extracted into your \Cyberpunk 2077\bin\x64\ folder it'll do the rest.

Cyberpunk's cars feel a bit like balloons with "A reel CArE" written in crayon on them. They're not fun to drive. Better Vehicle Handling can't work magic with its new configs, but they do make everything feel weightier and just a bit more interesting to drive. They stopped development in December, but there are definitely improvements with handbrake turns. I hope someone picks it up and develops it further, or that CD Project takes a long hard look at that they've done and fixes it.

There aren't many visual overhauls that I think I can put out there without a bunch of caveats. Reshading a game is a particularly personal process, so I'm not about to tell you that you should make the bloom more or less bloomier, or that your saturation would be better higher or lower. I will, however, suggest that there's a DOOM reshade that's worth installing because there's nothing more fun than pretending it's 1993 again, and your CRT is splashing individual pixels around like a mad painter.

So, yeah, try DOOM Reshade out for shits and giggles. Though it really trashes the in-game text, it's still fun.

You'll need Reshade installed and the DOOM Reshade applied. Copy everything to your Cyberpunk 2077\bin\x64 folder. Home enables the Reshade menu, and Page Up enables and disables the mod.