During this year’s E3, I saw the largest screen I’d ever witnessed, folded around the corner of a building like a giant piece of glowing paper. It told me to buy Nike. LA is already the neon futuretown of California, never mind Night City. But I didn’t just see ads for shoes at the LA convention centre, I saw a lot of games too. From the bustling streets of Cyberpunk 2077 to the twisting tornadoes of Just Cause 4. From the crumbling Capitol of The Division 2 to the clumsy motorcycling of Trials Rising. Here are my highlights from the game industry’s annual festival of bullets and colour, the sci-fi dystopia that was with us all along.

Dust is the perennial enemy of mankind. But so are horrible mutants. GTFO has both. It’s a new 4-person co-op shooter from some of the folks who broke away from Payday, including the heist-em-up’s principal designer Ulf Andersson. I played two games of this, delving into a 300 foot deep sci-fi cavern armed with a glue gun, and later with some trip mines. The atmosphere is pure Aliens, and the monsters are otherworldly and demonic. One of them casts horrible scent tendrils out into the air. Others are lanky, pustule-covered giants.

Setting traps and preparing for an assault by these door-busting creepers at times felt like the defensive firefights of BioShock 2. But the best part was using the terminals, old-fashioned MS-DOS style computers that you have to type commands into, Duskers-style, to open doors and lockboxes for your mates in other parts of the cavern. That means briefly splitting up. But what’s the harm in that?

The ragdoll riders of Trials have always been inherently funny. And what’s better than a ragdoll motorcyclist? Two ragdoll motorcyclists. Both on the same comically long bike. This is Trials Rising’s tandem mode, a local co-op version of the bike balancing shenanigans. Each player has 50% of the throttle, and 50% of the balance (although I couldn’t tell if the bike’s physics are split by position - if player on the back has more weight and control of the rear end, for example).

I played it with a Redlynx artist, who reminded me that it is possible to bail out of your bike by tapping Y on the gamepad. We spent the next 15 minutes throwing ourselves from our bike during ridiculously high jumps, sometimes together, sometimes just one of us. It’s possible to drive on without your partner, but without their throttle and help, it becomes harder. This only made suddenly abandoning the bike during a difficult jump even funnier, as it means you get to watch your mate suddenly try to right the extra-long vehicle by themselves.

I never got on with Life is Strange and its high school protagonists. The cheesy hello-fellow-kids dialogue made me wince at every "hella". But this free, self-contained follow-up featuring a young boy within the Life is Strange universe looks like it could change my mind. A short demo at the Square Enix booth saw young Chris designing his superhero costume, confronting a vicious monster (the water heater) and talking to his unkempt, day-drinking dad (it seems mum has died recently).

At one point, we see Chris firing a nerf dart at his dad, who’s sitting watching an American football game. His dad plays along, pretending to be a grumbling zombie, and although he is often sweet and well-natured in this way, we do catch glimpses of a deeper neglect and breadline poverty. An untidy bungalow, basic meals, an angry swear word, chores left undone. There’s something lonely and pathetic, in the literary sense, about Chris’ Saturday morning spaceship flights and walkie talkie status reports to his imaginary ally hiding in the treehouse outside. Sniff.

The ‘Please Let It Actually Be This Good’ Award - Cyberpunk 2077 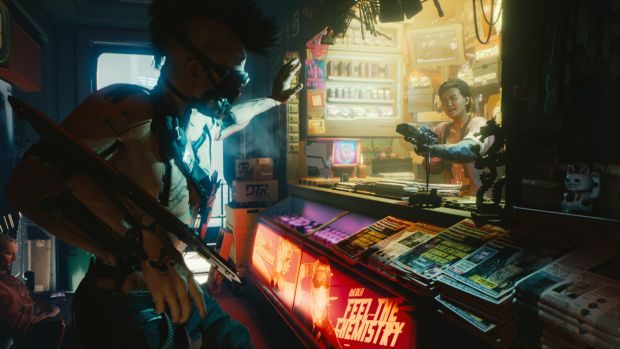 Everyone was nattering about this first-person taster of gunplay and cyber dialogue. CD Projekt Red took crowd after crowd of media and industry bods behind closed doors for a 50-minute demo. I hope it’s as good as it looks. I’m sceptical the final game can be as detailed and exciting, and E3 demos for anticipated games have a habit of being unrepresentative slices full of subtleties and features that get watered down in development (RIP the roaming herds of No Man’s Sky, the quantum world-hopping of BioShock Infinite). Cyberpunk 2077’s demo set off my bullshit detector a couple of times, and was highly scripted, but it also showed much that was feasible. If the creators can retain the bright atmosphere of the demo’s crowded, quest-filled city, if they focus on dialogue and storytelling in the same way they did for parts of the Witcher 3, I’ll be satisfied.

This stood out for the opposite reason as Cyberpunk 2077. It felt real. It was still a hands-off presentation, the kind of demo that sees someone from the studio fiddling with a controller while you watch. During these it’s often impossible to tell if what you’re looking at is game or theatre. It might be a scripted sequence, it might be carefully choreographed, or it might even be a recording, with the player(s) basically miming their thumbs across a battlefield.

But in the case of Just Cause 4, the small mistakes, pauses, and playfulness of Avalanche’s player made it clear he really was in the fictional nation of Solis, and was partaking in firmly do-able stuff. Yes, you can pursue a tornado in a heavy stormchaser. Yes, you can stick a bunch of thrusters to a cargo container. Yes, you can attach some balloons to a car and have it follow you through the air. Yes, that was a goat standing on a car bonnet for some unknown, buggy reason. The tornado we saw looked particularly good, lifting up all trucks and shipping containers in its way, levelling buildings and destroying bridges. “None of this is scripted,” said the developer talking us through the demo. He didn't need to. It showed.

This was as dumb as a bag of mudskippers. 11 years ago From Software made a game for the Xbox that was only released in Japan: Metal Wolf Chaos. It featured the President of the United States jetpacking around in a mech suit, packed to the brim with stupid weapons, gunning down soldiers, choppers and trucks of a rival who had instigated a coup d’etat. It couldn’t be more over the top if it was the final scene of Blackadder Goes Forth. Now, Devolver Digital have organised to finally publish a polished-up version in the West. How they managed this is an interesting story in itself, but I’ll tell you about that some other time (basically, it happened because of a joke tweet). It’s hard to see how the creators of this batshit action game went on to make Dark Souls, but that only adds to the joyous stupidity of it all.

Most indistinguishable from its predecessor – The Division 2

One of my fellow RPSers asked me to take note of what was new about Tom Clancy’s The Division 2, so he could tell you plebs everything we know about it. After less than 25 minutes of rambling through a destroyed Washinton DC, I barely had anything to report. You have armour now, and you can replenish it mid-fight. And classes now have special weapons (I played as the Survivalist, who has a crossbow with explosive bolts). Apart from those two changes, the promise of raids, and a few small UI tweaks, it was hard to see much different in this semi-shared-world shooter, other than the new summer setting in the US capital. The city does look threatening and atmospheric, to be fair. Effigies hang from posts, warning survivors away from territory belonging to the True Sons, a bunch of Joint Task Force boys gone rogue. Graffiti on walls reads: “We have more guns than you”. A boast that, by the endgame, will likely be proven false. 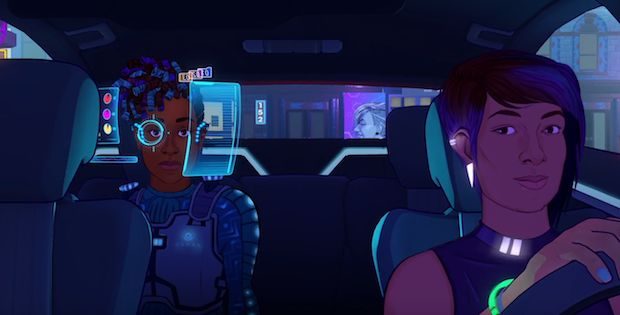 I had some fun taxi drivers in LA. One of them was from Palestine, and showed me a bullet scar in his bicep, a wound he got as a 13-year-old rioter, he said. Another had parents from Mexico, and his mother got into the States in the boot of a car. Taxi rides in Neo Cab weren't quite as high stakes, but they were often as storied.

It’s a swish-looking bit of interactive fiction, set in a future where cab drivers are almost extinct, replaced by self-driving cars. You pick people up via an Uber-like app, and try to keep both your rating and your mood in check. How much you earn has an effect on how well you live. I picked up two passengers in my short play sesh. One of them was a doctor, or “someone who helps people” as he put it. His medical school, it turned out, was YouTube. And he was on his way to “help” a patient now, your cab being the de facto ambulance. My second passenger was a cultist who told me to “embrace the Pain Worm”. I absolutely will, I said. He gave me five stars.

After playing this at a party for indie developers, I got into a real cab once more. My driver's first words to me as I sat down: “Sorry it smells like weed in here.” Her last passenger had been carrying a massive bag of the herb and, yes, the smell lingered like a grassy fart. Five stars.

Hang on. Outer Wilds… Outer Wilds… Yes, that was the space exploration game that won an IGF prize three years ago. You know, the one where the universe explodes and resets every 20 minutes. Why did I go see something I already played as a prototype years ago? Because I’m thorough. And so are Mobius Digital, by the looks of things. They’ve given it a big overhaul. What were once lumpy green beings are now fully-formed aliens with freckles and pointy ears and Mudokon-like posture. The worlds are more detailed, the ship’s cockpit is splendid, and has an easy-to-read flight system. Cryptic text left scribbled around the solar system is auto-scanned with a nifty translation device, and a "Rumour" log keeps track of stuff to investigate, even between the apocalyptic resets.

Crucially, the magic of discovery is still there. I visited a couple of worlds during the E3 demo and even though I’d been on those planets before, years earlier, they still surprised and delighted me. On one tempestuous world, I was checking the map on my ship when we were suddenly flung into the air, captured by a spinning tornado and launched back into space. It’s due out some time this year, and I’m looking forward to exploring the miniature solar system and chasing the mystery behind its time loop.

World I most want to hike through – Ashen

I wish I’d had more time in Ashen’s colour-drained world of skinny wanderers. There’s a ton of Dark Souls sprinkled in this particular kiln, and every single button matches its Soulsian counterpart. That doesn’t bother me. If there’s a control scheme and combat philosophy to copy, you can do a lot worse. But it’s the landscape and townsfolk I want to know more about. Here, there’s no Firelink, but there is a settlement that grows and changes as you explore the world, telling people of its whereabouts.

It’s also designed to be played in co-op, with no invasions possible – a slightly softer adventure for those who fear the PvP rats of Miyazaki’s worlds. Visually, it reminds me a lot of Absolver, another gorgeous world of interconnected harbours and ruins. We're starved of new places to explore in that game, so the open lands of Ashen - with all it’s giants, creatures and sweeping hills - looks very inviting.