Did you know that in 2004 Valve launched Half-Life 2 [official site]? And did you know that Episode 1 followed two years later and Episode 2 a year after that? Did you know it's now been ten years and besides a mass of rumours, bad jokes and conversations with unverified sources, Gordon Freeman's elusive third Half-Life outing - be that Half-Life 3 or HL2: Episode 3 - is still Not A Thing?

I'm sure you did. Let me now ask you this: do you know about Half-Life 2's modding scene - a community which has been producing consistently brilliant tweaks and tinkerings to Freeman's Combine-killing shooter for over a decade? Built from Valve's Source Engine, the following list is comprised of single and multiplayer mods for the Seattle-based dev's seminal and ever-enduring FPS - some of which are set in Freeman-familiar worlds, others which take on completely new looks entirely.

I know it's hard to swallow, but Half-Life 3 might never happen. Play these mods instead. 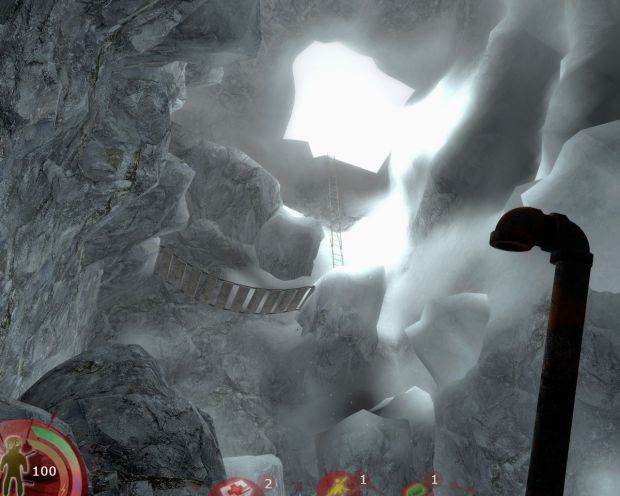 Get a Life was one of the first Half-Life 2 mods I ever played, and I instantly loved how different it was from its source material. Playing as Alexander Zemlinsky, you assume control of a vulnerable subway technician suffering from leukaemia and are tasked with taking on an unscrupulous agency and waves of otherworldly beings.

As an everyday civilian, Zemlinsky can barely handle the mod's 13-weapon arsenal and afflictions such as bleeding, dizziness, shaking while aiming, and limping make combating its 60+ enemy types across its 24 maps less than straightforward. Add that to the mod's limb damage system and you've got your work cut out for you. Upgradable weapons and drugs that trigger a special bullet-time mode work in your favour across Get a Life's ten hour or so runtime. 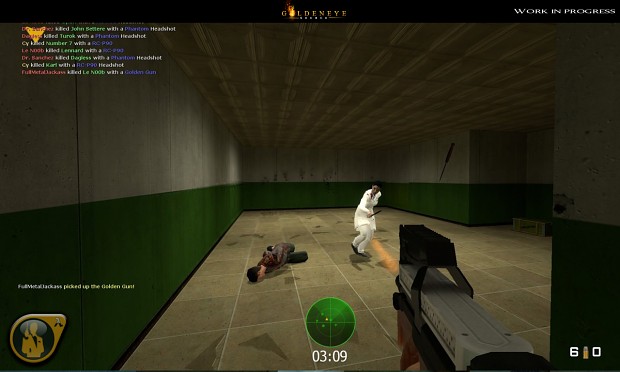 Designed to reimagine the Nintendo 64's wonderful GoldenEye FPS from 1997, GoldenEye Source is a fan-made Half-Life 2 total conversion mod with one goal in mind: "To bring the memories and experiences from the original GoldenEye64 back to life using Source technology."

It's been around for almost 12 years and has been consistently updated along the way - having launched its version 5.0 last year. Classic maps such as the Bunker and the Dam return, however while its team promise to maintain the "original feel" of the game now two some decades old, naturally it's been brought up to speed with ten multiplayer game modes, 25 maps in total and all 28 weapons from the original. Here's its latest trailer: 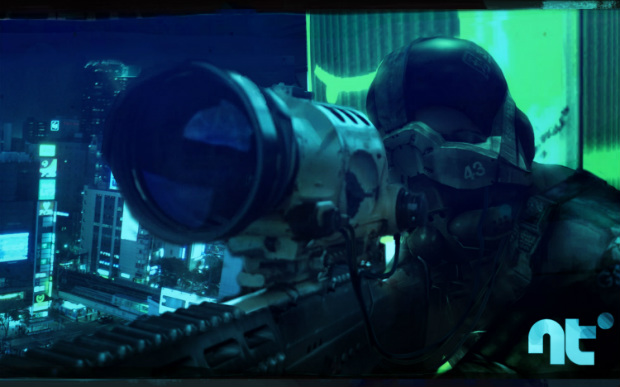 Set in a fictionalised cyberpunk Tokyo some 30 years into the future, Neotokyo is best described as a class-leaning Counter-Strike mixed with the Japanese fantasy/sci-fi manga series Ghost in the Shell. Government corruption is said to have turn the Japanese capital as we once knew it into a dystopian nightmare where war rages between the military sect Jinrai and the National Security Force. In practice this means loads of twitch shooting and relentless warring across Team Deathmatch and Capture the Ghost - the latter of which is portrayed by a female robot and is, as you probably expect, this mod's version of capture the flag.

Once housed on ModDB, Neotokyo now exists on Steam and can be downloaded without owning Half-Life 2 itself which is pretty neat. 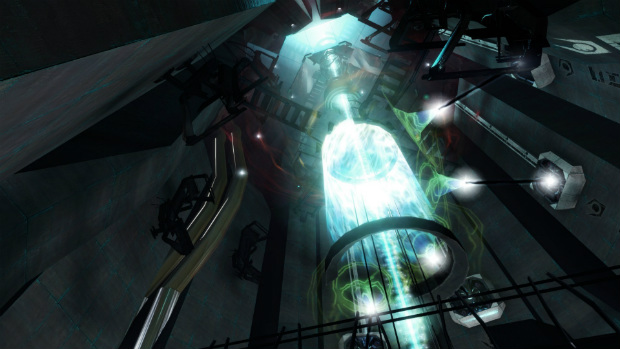 Perhaps Minerva's greatest achievement is that much of its sprawling levels play out in tight corridors and confined spaces, yet it rarely, if ever, feels cramped or claustrophobic. And this is testament to lone creator Adam Foster who, through this wonderfully designed three-episode mod, wound up with a full-time job at Valve.

Filling the boots of an unnamed hero, you're tasked with uncovering the mysteries of the heavily Combine guarded island you've been held prisoner on. "Something is going on here," suggests the mod's blurb. "Your goal is to uncover what that is and destroy it." Doing so will lead you into the island's central mine shaft and with the help of the titular Minerva - who only exists via on-screen text messaging - you'll set about taking down whatever it is that's keeping you trapped on the archipelago.

First released in 2007, Foster launched Minerva on Steam Workshop on 2013. You're required to already own Half-Life: Episode One to play. 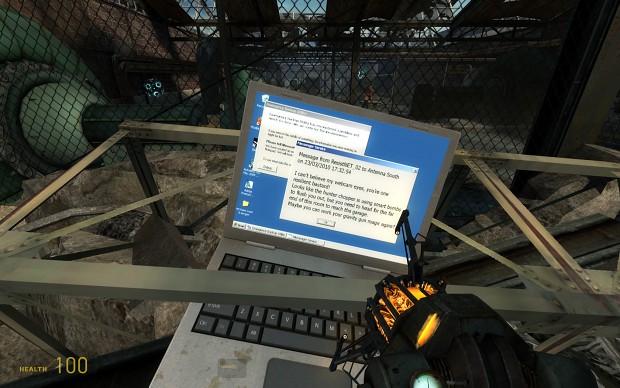 A non-combative game before non-combative games were cool. Crafted in 2009, two years after the aforementioned Minerva, R&D was often uttered in the same breath as Adam Foster's work by way of its originality and ambition. Minus guns, besides the Gravity Gun, Gordon Freeman must here rely on his wits as you guide him through a series of tricky, often mind-building and sometimes infuriating puzzles. Occasionally, you'll face the odd baddie who wants nothing more than to see you dead, but only by leveraging your surrounds can you see them off.

"You're definitely not Edward Pistolhands," said Alec not long after R&D's release, before saying this:

"The best comparison, oddly, is the original Half-Life – a game whose noble puzzle values its sequel largely abandoned in favour of super-atmospheric action. There is very much that sense of strange tricks and traps born of scientific experimentation, and your largely non-combative persona is in many ways more in keeping with the mind-over-matter character we’re often told Gordon Freeman is than the openly, incongruously murderous role he dons in Valve’s games."

Games such as the Talos Principle have since performed the idea better, but R&D was well ahead of its time some eight years ago. 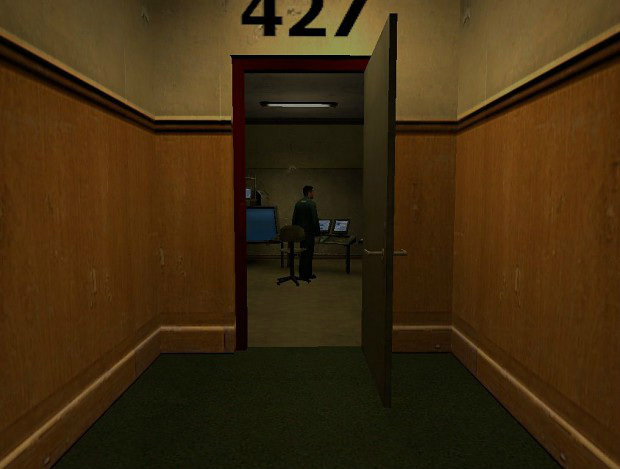 How to explain The Stanley Parable without spoiling it? And how to explain it without sounding mad? Two tough questions that I'd honestly rather you worked out for yourself because The Stanley Parable really needs to be experienced to be believed. You probably already know this mod went onto become a fully realised paid-for game - which is absolutely worth paying - however its less sophisticated, rougher-around-the-edges, and free mod version can still be played and enjoyed today.

Exploring themes of 9-5 culture, the illusion of choice, and the contradictions of self-fulfilment, The Stanley Parable takes you on a journey where your only friend is an omnipresent, overseeing narrator. But do you trust him?

"You will make a choice that does not matter," suggests the mod's description. "You will follow a story that has no end. You will play a game you cannot win... it's actually best if you don't know anything about it before you play it." I agree. 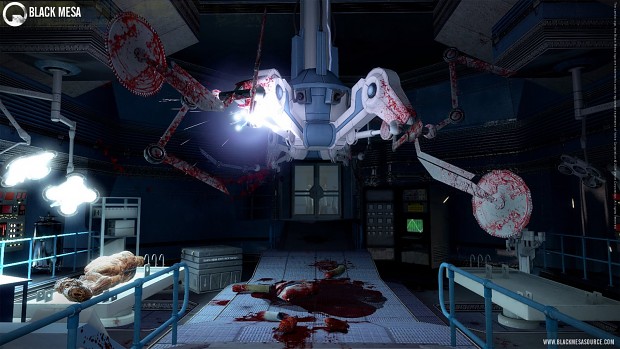 Put simply, Black Mesa is a mod project that started in 2012 with the aim of reimagining the original Half-Life in its sequel's Source Engine. Having somewhat grown arms and legs since, Black Mesa now exists as a free mod which its creators the Crowbar Collective are no longer progressing, and a paid-for Early Access game, which will receive the most attention.

For example, this means Xen - the otherworldly zone Gordon Freeman visits towards the end of the original game - will not feature in Black Mesa's mod version, and the premium version plans to add ten or so hours which won't feature for free. That said, about 85 percent of the single player game does exist in the mod and is for the most a beautiful reinterpretation of Freeman's first outing. Perhaps the best testimonial I've spotted for Black Mesa is tied to generational differences: "Now I understand what people felt like in 1998," said ModDB user HunteR4708 which is probably absolutely right, even if it makes me myself feel old. 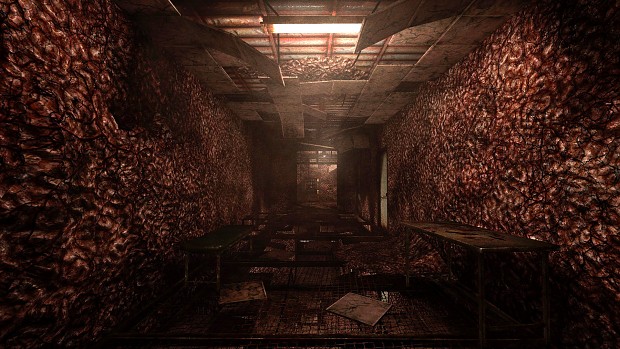 There are loads of horror-inspired Half-Life 2 mods kicking around these days, however 2015's first-person Silent Hill: Alchemilla is my favourite. While it claims to tell a "completely original story", Alchemilla is heavily inspired by the first game and reimagines its world - particularly the titular hospital and the outside otherworld areas - to terrifying effect.

Without spoiling anything, its puzzles are a little on the light side, so it's perhaps best to avoid diving into this one expecting a revolutionary first-person modern day retelling of the 1999 debut - a la Resident Evil 7. That said, while Alchemilla promises to entertain "fanatics of the original game", there's definitely enough meat on this 'uns bones to impress series fans of all understandings. 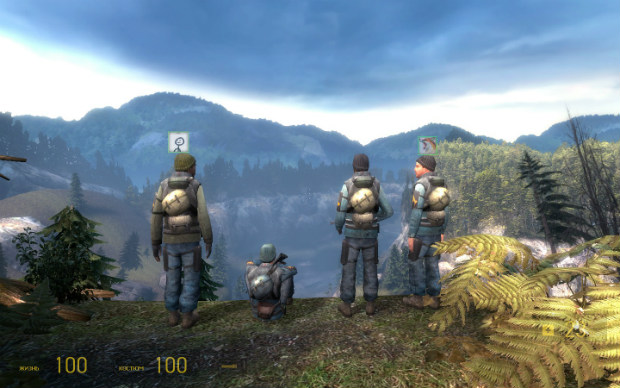 If co-operative multiplayer is your bag, look no further than Synergy. Another long-standing mod that's since been housed in the Steam Workshop, Synergy was born from a number of other mods - DC Co-op 2, Dev Co-op, Tim-Coop, for example - and stands to let players play through Half-Life 2's otherwise single-player campaigns with friends.

Be that Half-Life 2's base game, Episode One and/or Two, you and your pals can take down Headcrabs, Gunships and Striders to your heart's' content - and Synergy now even works with other user-made mods such as the aforementioned Minerva: Metastasis. Synergy also brings a handful of its own levels to the table, which means there's plenty here to hold you and your pals' attention. 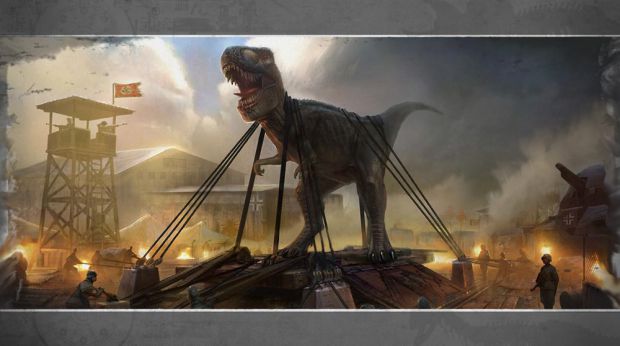 Besides having the best name on this entire list, Dino D-Day almost certainly has the best premise: during the second World War, Hitler has discovered a way to resurrect dinosaurs and, by fighting online, players can either choose to side with the Allies or the Nazis.

Now, a war-based Deathmatch-style shooter that lets players ride around on dinosaurs is probably enough to sell those of you inclined, however Dino D-Day offers a host of classes which vary on each side, a range of dinos, and an impressive arsenal of weaponry.

Dino D-Day is another mod which has since graduated to paid-for Steam release, however the original freebie itself is still available to download and packs five maps and three game modes - the latter of which includes team deathmatch, king of the hill, and objective mode. 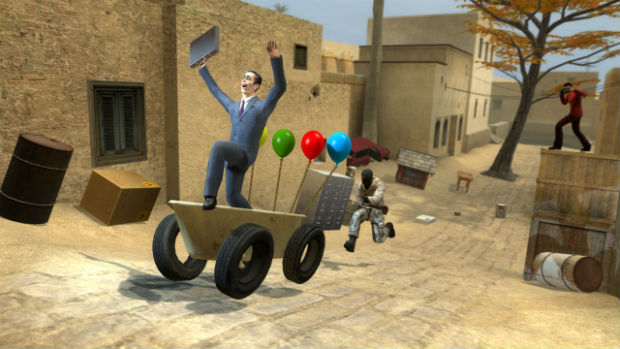 The archetypal mod - Garry Newman's Garry's Mod offers players a sandbox and tools to make it their own. There are no rules or objectives, but tens of thousands of players and game modes. 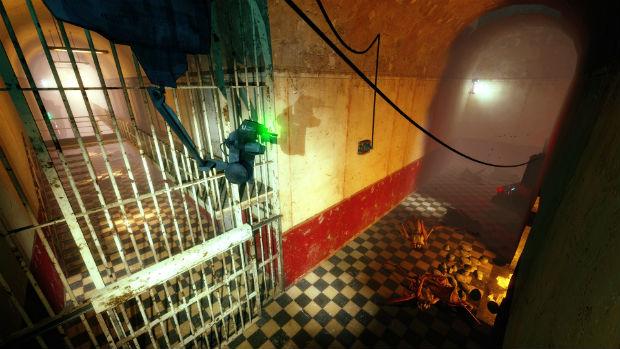 Prospekt has received middling reviews on Steam, however is a fun one-man project which furthers the story Adrian Shephard, star of Half-Life 1 expansion Opposing Force.

Dear Esther
By The Chinese Room 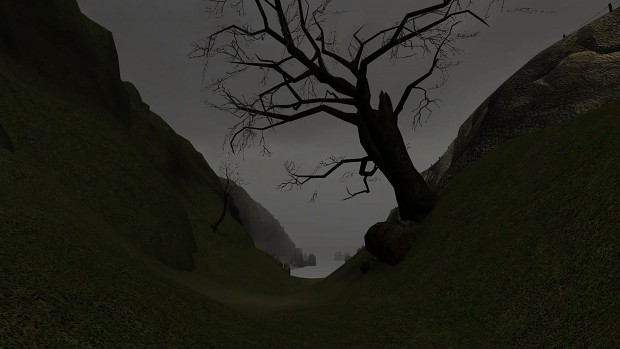 The non-combat exploration game, or Walking Simulator if you prefer, that started it all.

HL2: Capture the Flag
By MeNtHoL 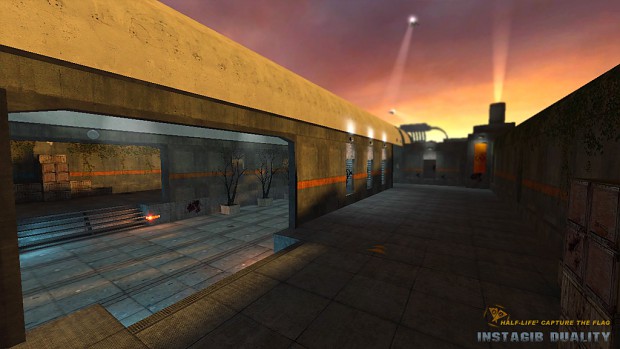 Simple, yet necessary. The Half-Life 2 Deathmatch mode than never was. 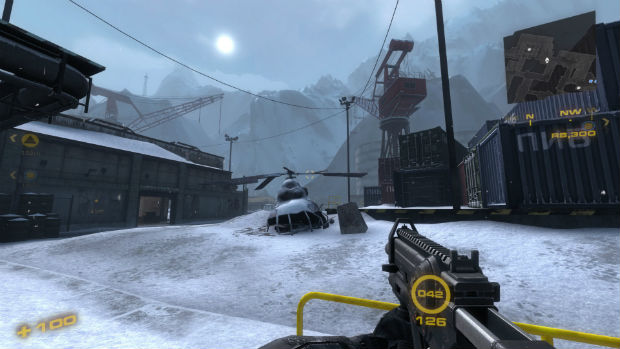 As noted above, Half-Life 2's modding community has now been operating for well over ten years. This means I've definitely missed some crackers, but the above list should more than get those of you new to the scene started. Again, these are my own favourites but, as always, I'd love to hear which ones I've missed in the comments below.