The HDR has always been our pick for the best sniper rifle in Warzone, closely followed by the slightly nippier AX-50. And the reason for this is just how much you can crank up the bullet velocity of the HDR with the right attachments. Our best HDR loadout in Warzone makes use of these attachments to give you an extremely powerful, virtually hitscan sniper rifle that can easily down an enemy with a single shot.

We're not going to waste your time with this guide. Below you can find the best HDR loadout we've found so far in Call Of Duty: Warzone.

Let's see what the HDR looks like with this particular loadout equipped: 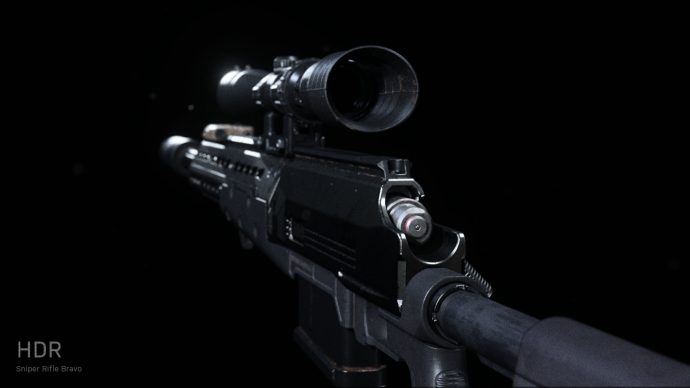 Key to the HDR's dominance is the 26.9'' HDR Pro barrel, which dramatically increases the velocity of each bullet - so much so that for all practical purposes you can treat the rifle as hitscan. Point at an enemy's head and click, and they die.

Alongside this we've further boosted the range of the HDR with the Monolithic Suppressor, but the real reason for the suppressor is to silence our shots so that we aren't highlighted on enemies' minimaps when we fire. The range increase doesn't actually matter too much here, as you'll see from the stats below in a moment.

We've done what we can to increase the ADS speed of this now-very-heavy sniper rifle with the Stalker-Scout stock and the Tac Laser (don't worry about the laser itself, it's never visible over the kinds of distances you'll be using the HDR at anyway). And finally, we've opted for the FMJ Perk to significantly increase the bullet penetration of the HDR, allowing us not only to deal more damage to vehicles and killstreaks, but also to hit far harder through walls, doors, and even trees. If you've always shied away from putting FMJ on a weapon, try it on the HDR. It's the perfect choice for your final attachment slot.

Now that we know what must be done to turn the HDR into a hitscan wall-penetrating one-shot monster, let's take a closer look at some stats to get a clearer picture of this extremely powerful sniper rifle:

On the whole, these HDR stats tell a pretty clear and simple story. It's one powerful and punchy sniper rifle, and it's a guaranteed knock if you headshot at any distance. You just have to be prepared for the low handling and mobility - as you should be whenever you use any sniper rifle.

And that wraps up our Warzone best HDR loadout guide! But we've got plenty more on Warzone, including our page on the Best SP-R 208 loadout in Warzone if you're still getting to grips with this powerful new DMR; or our larger Best guns in Warzone guide if you want to brush up on the current weapons meta.