It's only been a few weeks since Microsoft Flight Simulator cleared the runway and soared into my heart. The flight has been mostly smooth, but there has been some turbulence here and there, with a few major monuments missing and the autogen occasionally creating abstract art instead of hills. No matter, the overall excellence isn't impacted by that, and it has rallied the sim community to help fix those flaws. Flight Sim's SDK has enabled the players to swap out stadia and flatten fjords. And beyond replacing a few mishaps, they've been getting creative. Kaiju have started popping up in flight paths.

I've already taken a small look at what the community has made, which spurred me on. The game is so new that there's no single place to find add-ons. Generally, Flightsim.to is a good place to grab things from, as it does its best to talk to the mod authors about how they want their mods presented. But even it will send you elsewhere to grab some downloads, as per the author's request. If the mods just have download links I've done my best to provide some context and information about where to find any potential updates.

One thing I won't be listing is anything that removes the giant monoliths that dot the world. I want to make the map more interesting, not less. Chock's away!

How to mod Microsoft Flight Simulator

You need to find your main game folder and the "community folder" within that. There are many places to download the game from, and each seems to place the main folder in a different location. As long as you know where you put it, you'll be able to find the community folder. This video will help if you struggle.

When you download file, you place the mod's main folder in the community folder. That's really all there is to it.

There's a mod manager that should help you add and remove any files. It was made for DCS, but the author has updated it for Flight Sim. Download it from here and extract it wherever you want. After you point the program to your "community" folder, you can use it to add or delete any mods you want. 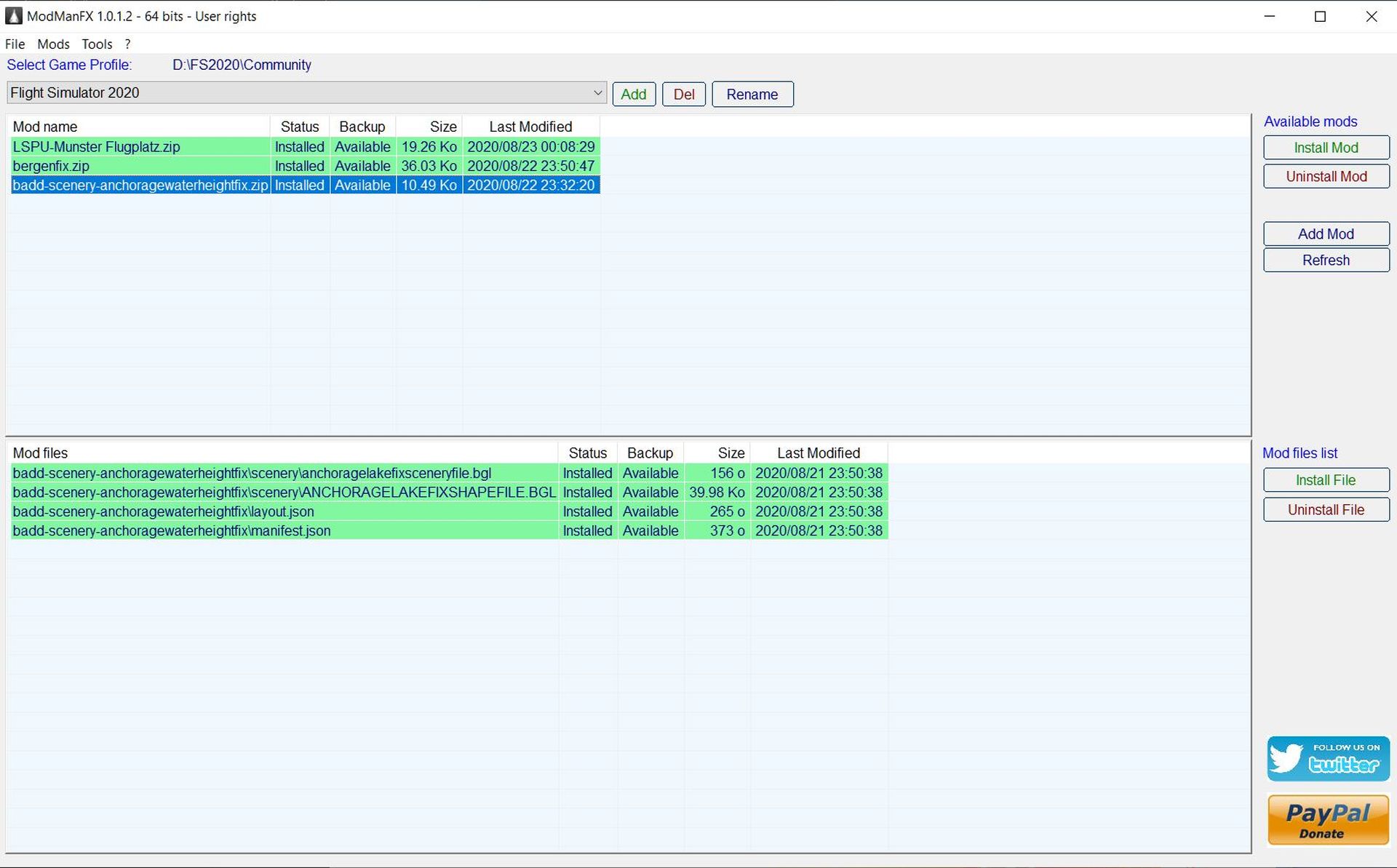 The manager only works with new mods. It won't work with previously placed folders, but all you need to do is move them out of the community folder and you'll be able to start again.

Scotland's capital didn't fare terribly well in the transition to Flight Sim. The city of castles and monuments is filled with generic lumps. Do you know what they have spanning the River Forth? A sunken road.

Captain "SirLeinad4" has been speedily swapping out those basic bridges with fabulous facsimiles from, ahem, Google Maps. The current list also includes the likes of Murrayfield Stadium, the Scott Monument, and Holyroodhouse, and would make for an excellent little tour if you're up for it. 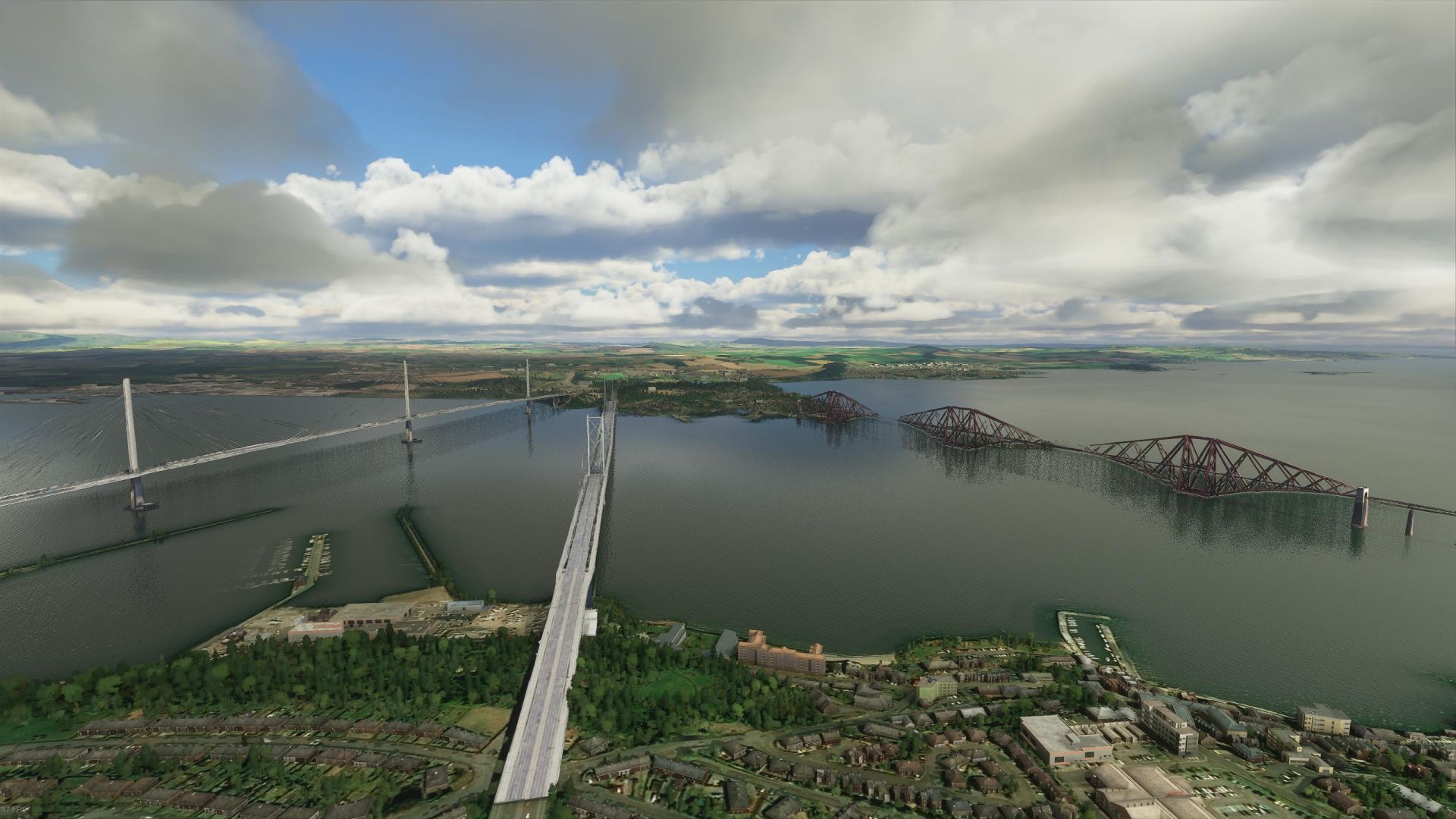 Not every city in Flight Sim has been rendered photogrammetrically. Lyon wasn't, so "robin00795" ripped and converted the whole city for anyone who wants to see the Cathedral Saint Jean Baptiste or the offices of Dishonoured developers Arkane. This FPS chewing beast is only suited to a powerful PC, but those with the CPU cycles can enjoy the urban sprawl.

Buffalo is another city where the buildings were swapped out for shifty-looking alternatives. Until now, you'd have been wasting your time if you went looking for the McKinley Monument or the Statler Tower. But with this mod? Eyyyyyyyyyy! 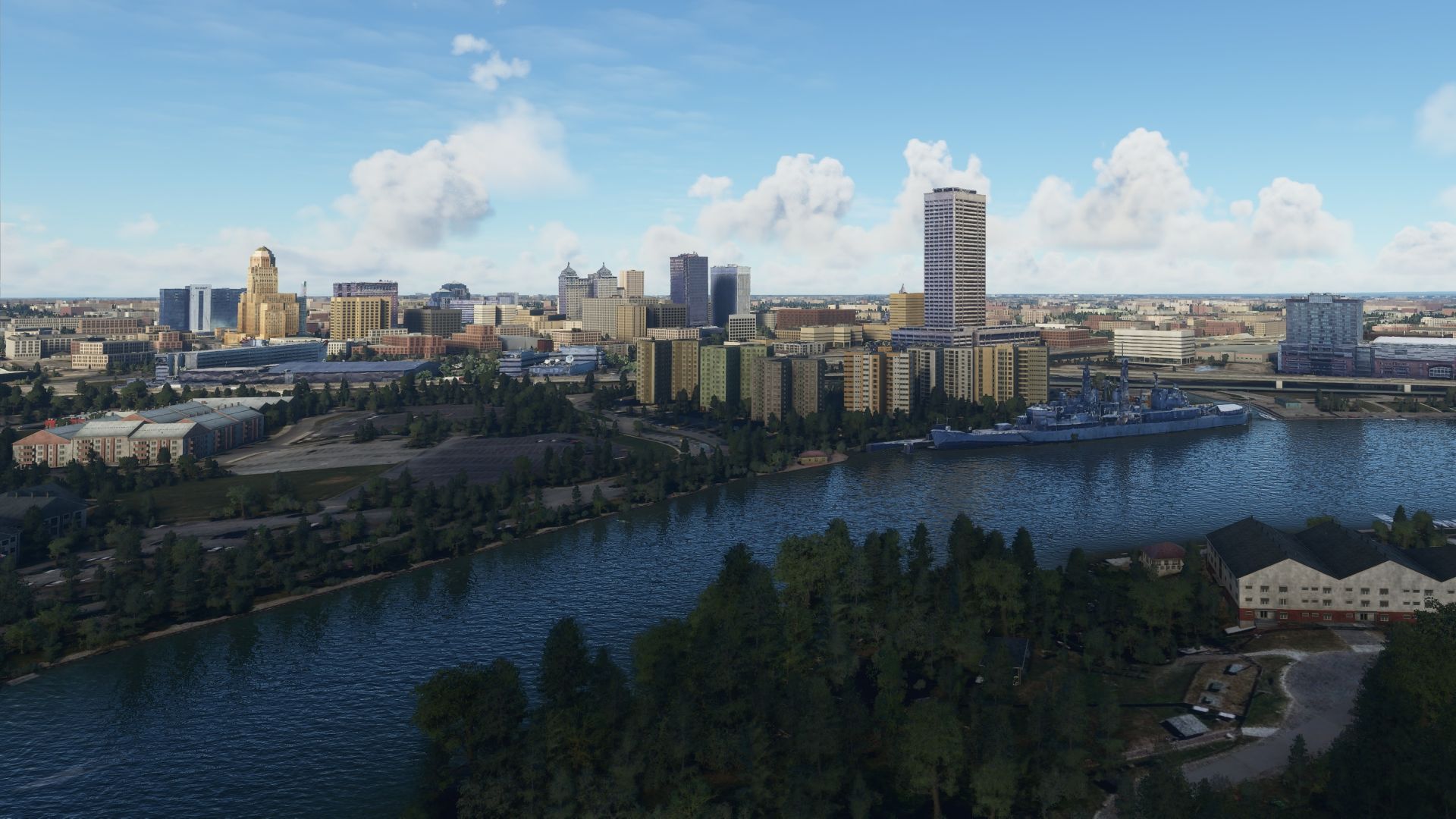 Iceland's terrain bugs have turned the dramatic scenery into a bit of a lumpy oddity. That's why "baddweapon" has taken on the task of overhauling the island with obsessive zeal. This is the sort of thing you can expect: "I used a map of Iceland's forested areas as a guide on where trees should and shouldn't be."

Reykjavík Cathedral, Harpa concert hall, Brautarholtskirkja, and the DC-3 plane wreck are in this download. It's not been uploaded to a handy site, so I'll be linking to the Reddit post with the download link. I'd keep tabs on baddweapon's Reddit account if you want to know when the next update is. 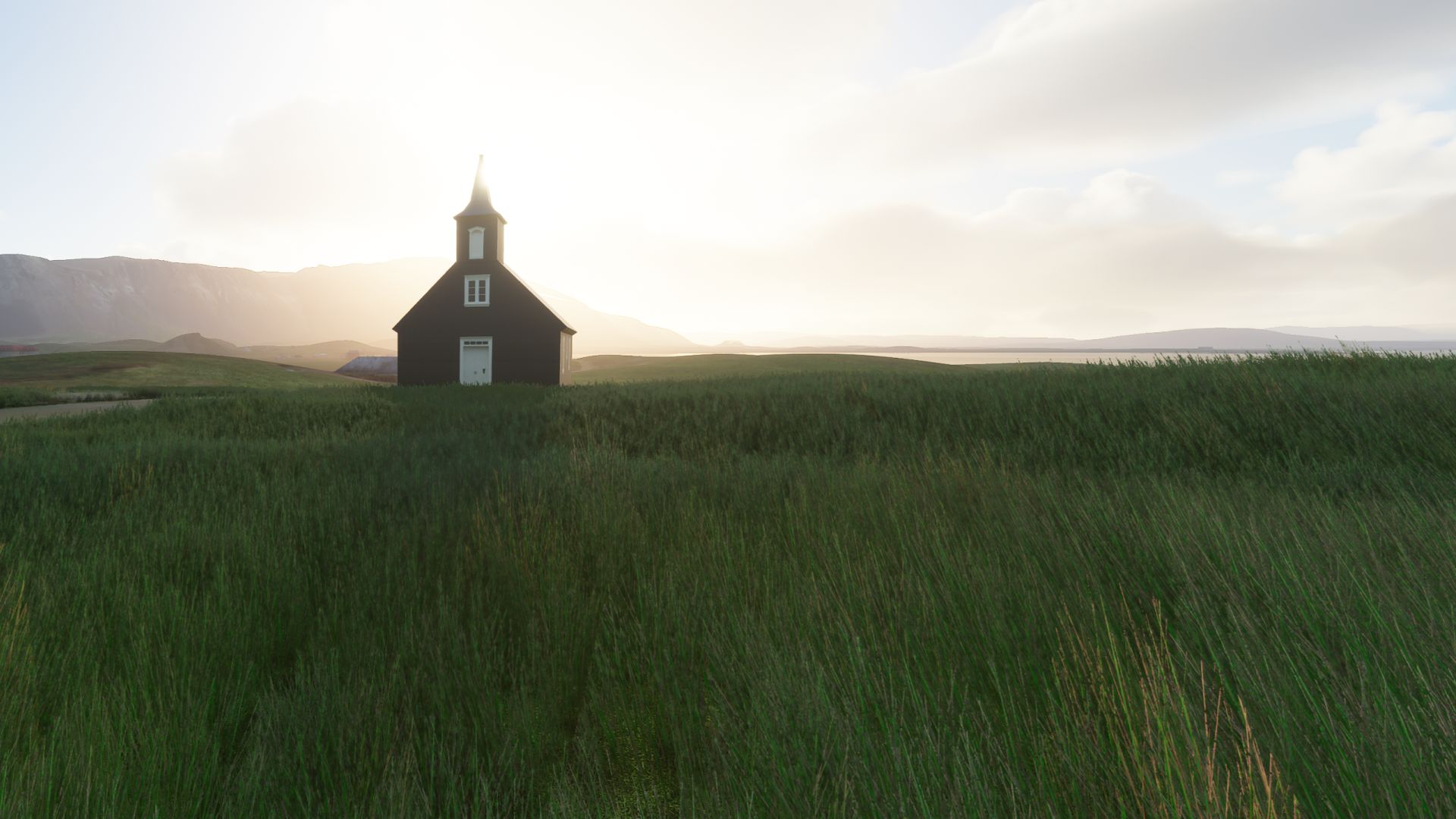 The world's worst wall is absurdly flat in Flight Sim. The autogen has splatted the terrain with a photograph of the henge, and what you see when you're pulling off a fly-by looks more like an overgrown garden path. Do yourself a favour and install this fully 3D henge. You'll thank yourself during the solstice. 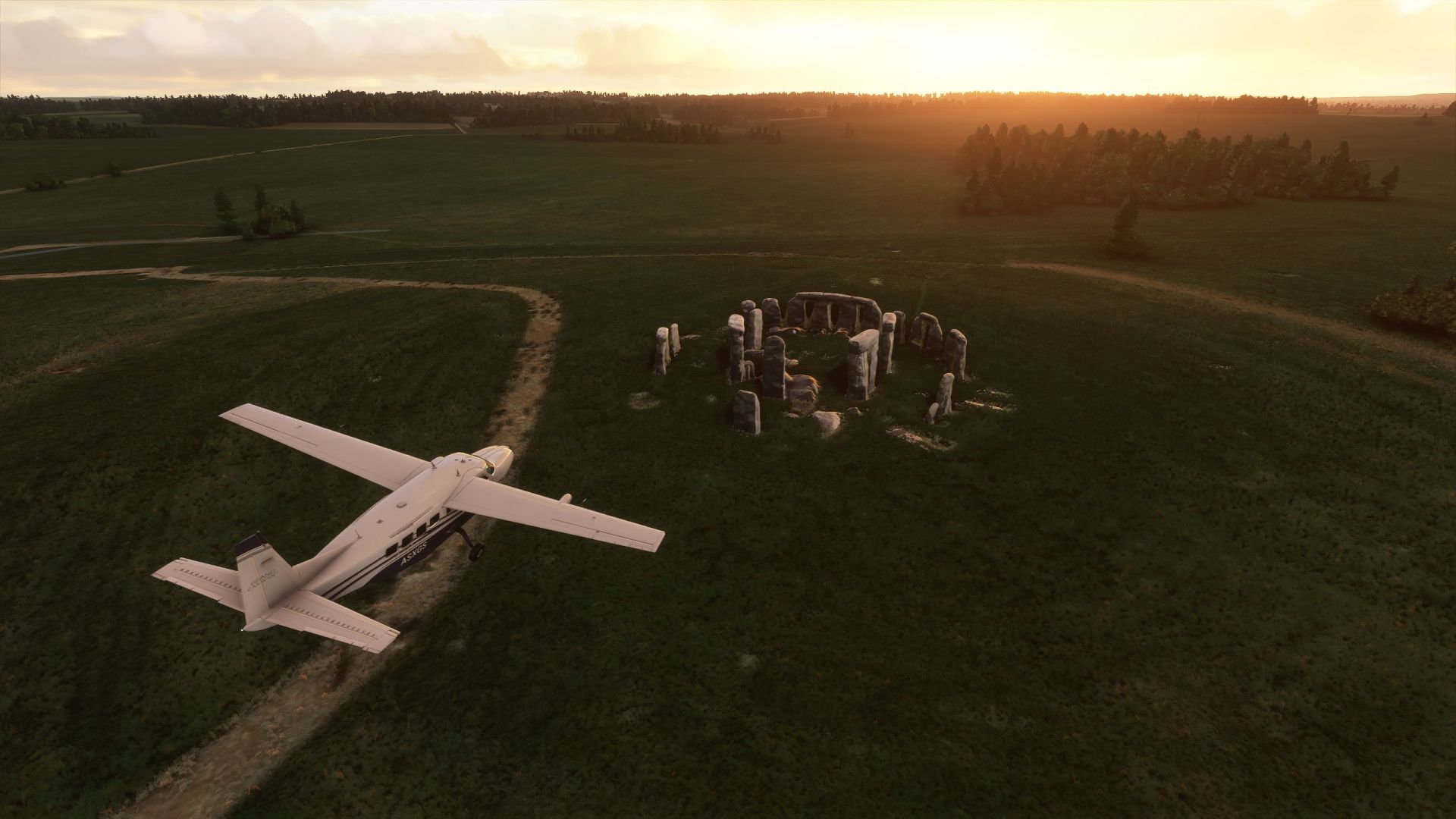 The Lovell Telescope by timhuckle

I love it when modders get specific. "Timhuckle" found the Cheshire landscape missing one crucial element: the Lovell Telescope at Jodrell Bank. With this, you can restore the 50-year-old landmark AND scan the heavens for meteors and other planets. 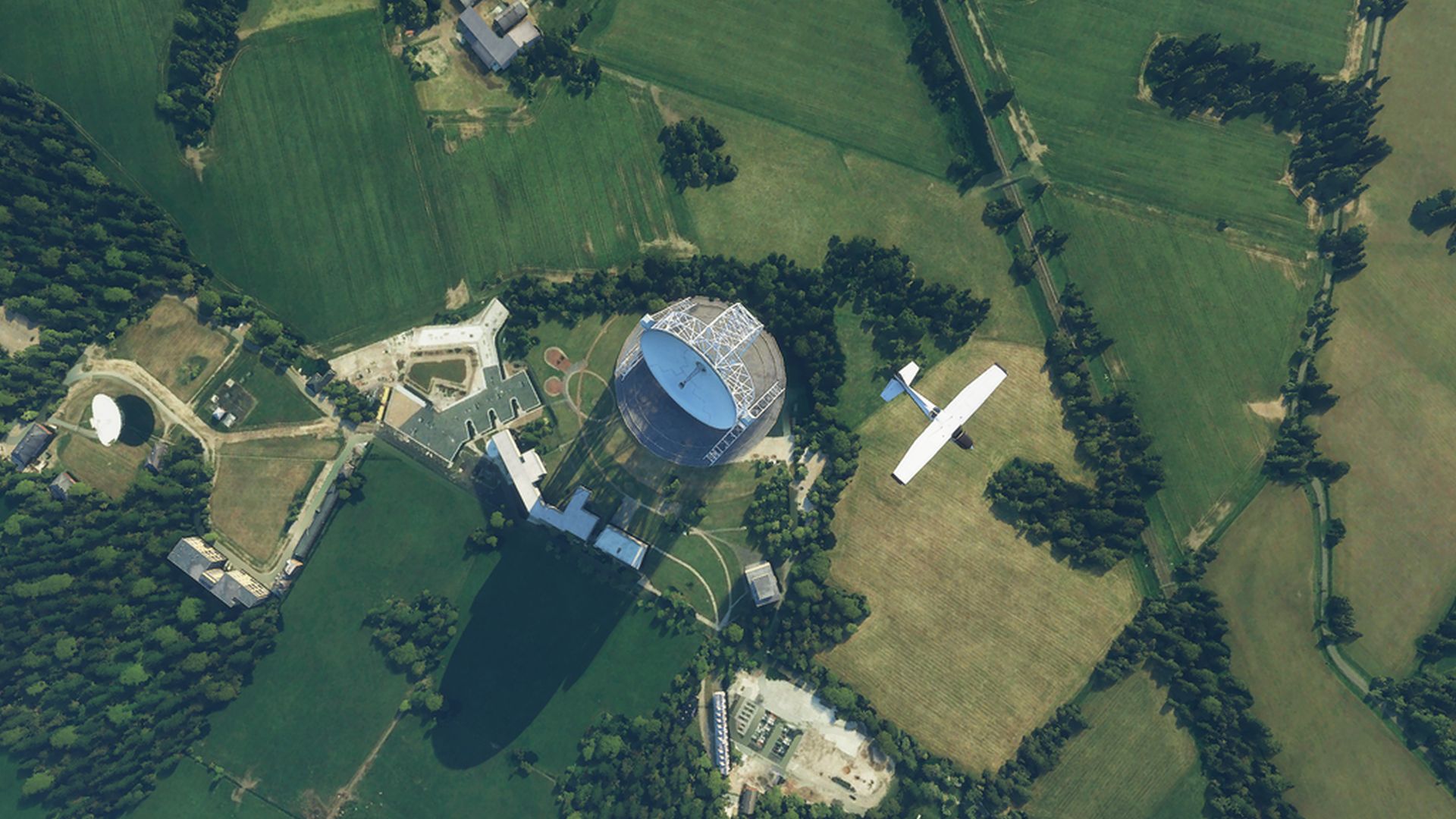 Flight Sim turned Alaska's rivers into swollen varicose veins. Iceland overhauler "baddweapon" took on the task of smoothing things out, flattening over 400 bodies of water. It's by no means an exhaustive list, but if you're flying around Denali, Lake Clark, Katmai, and Kenai Fjords, you'll find things considerably flatter. 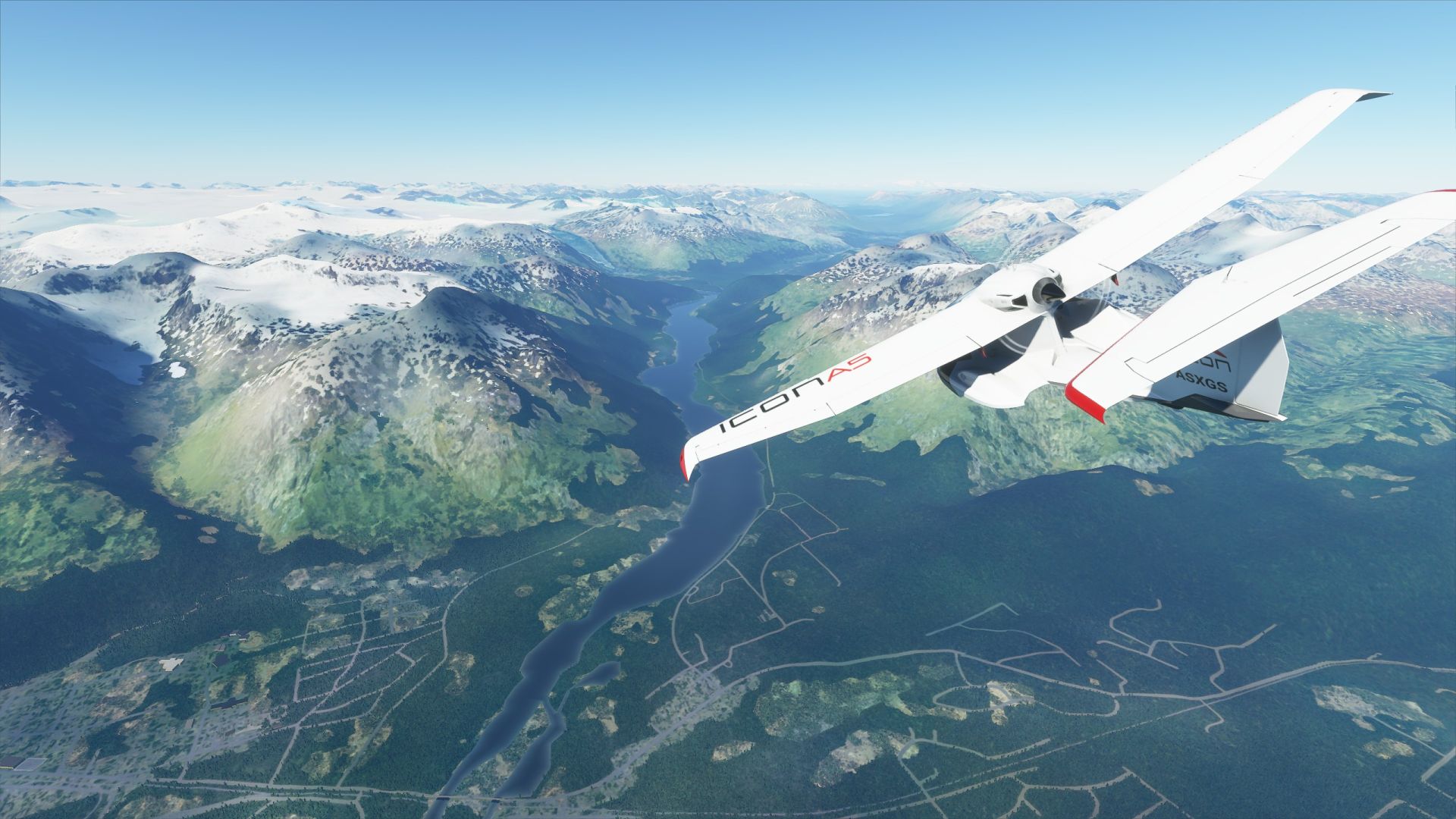 This similar fix to Bergen was made by "henrikx". He encountered extreme variations in the water levels there and smoothed them out like a giant creature that stomped them back into place. 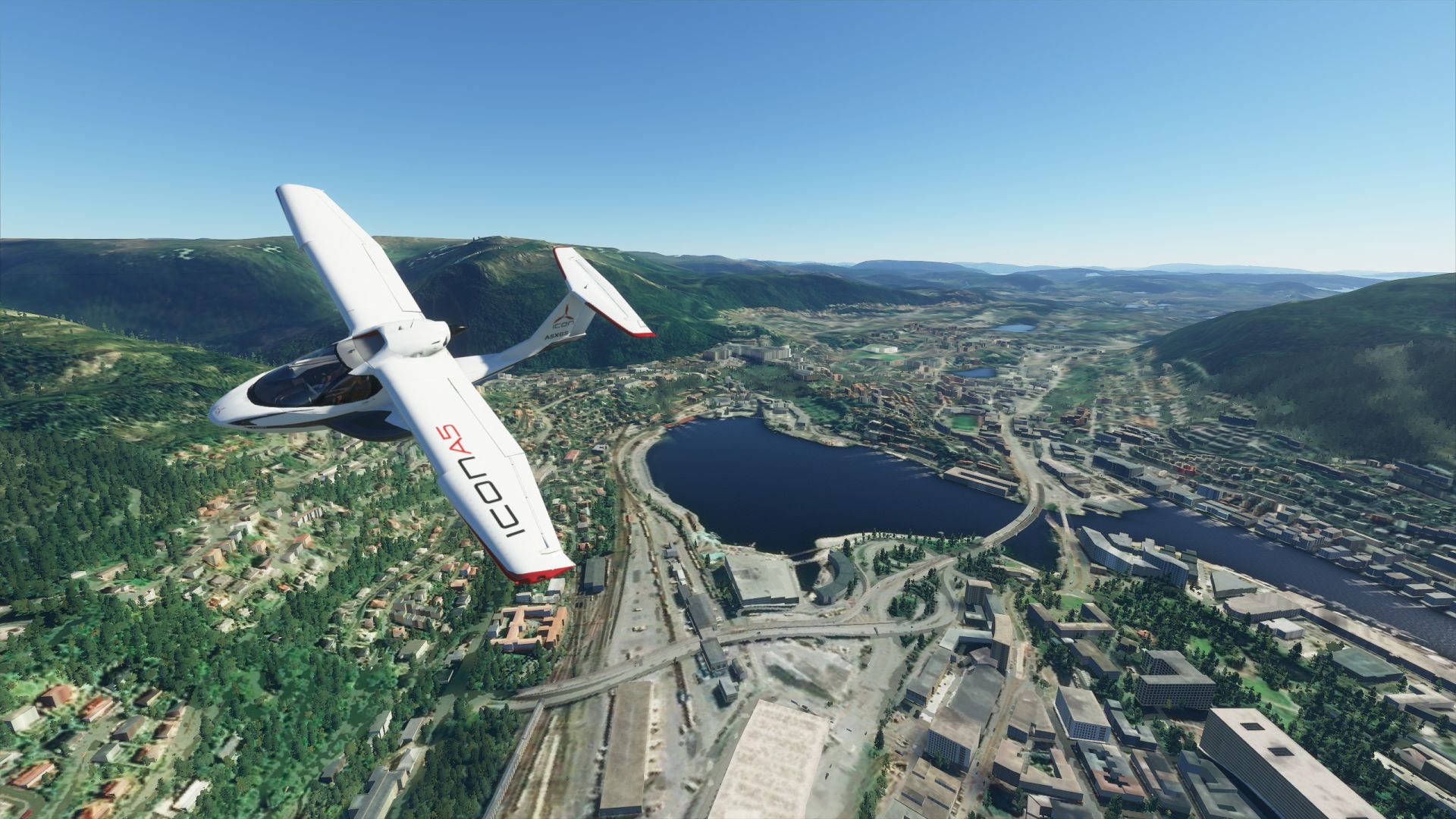 You can fix, flatten, and tweak every broken corner of the globe, but you can also have fun if you choose to take your simming with a hint of satire. "GhostofSatan" crafted a San Francisco skyline dominating Godzilla model. It's a bit plasticy close-up, but having it on the skyline has made it my game of the year. 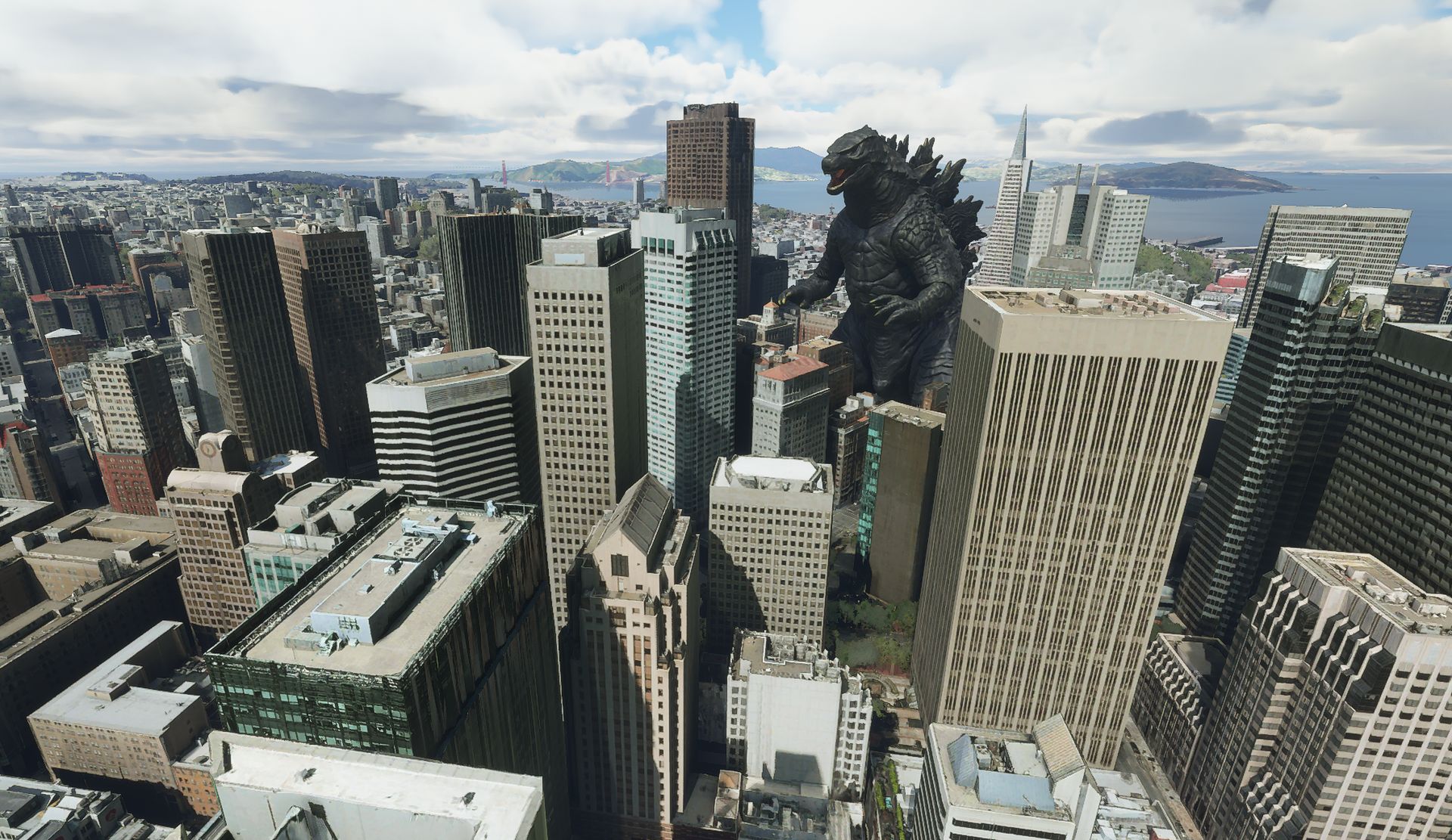 You can replace more than the buildings and monuments. "Eggman28's" simple model swap will let you drop in an X-Wing, a Tie Fighter, and the Millennium Falcon from Star Wars into the game, though they will fly around like regular aircraft, and you can only use one at a time. To make things a bit more Lucasy, you can add a Star Destroyer to Sydney Harbour as well. I've linked to their Itch.io page below, where you can find all the downloads.

MSFS Liveries Mega Pack Version 8 by Clink123 and others

If you have a hankering to fly a commercial airliner or a customised one, then Clink123's Mega Pack is something to keep an eye on. We're already at version 8 of the reskinned plane pack, and it clocks in at over 2GB. It's also hosted on Mediafire, which means by the time you've downloaded this version the next one might be out. Still, it's the best package for this sort of thing.

The mega pack has a discord server, so the best place to find the most updated version is there. The link below goes straight to version 8.

This is something I dearly needed—a more straightforward VFR map. I'm not quite good enough to rely on the in-game VFR map. I need more detail, and that's where VFRMap helps out.

Download it and load the game. When you run the app and open a browser window to http://localhost:9000/, it will show you where you are, your speed, and altitude, but in a browser window and with OpenStreetMap providing the overview. For me, it's an absolute must-have. I can't parse the blue and green in-game map all that well, but with this, I know exactly where I am. You can even use it to drag and drop your plane elsewhere on the globe. It's the training wheels I need. 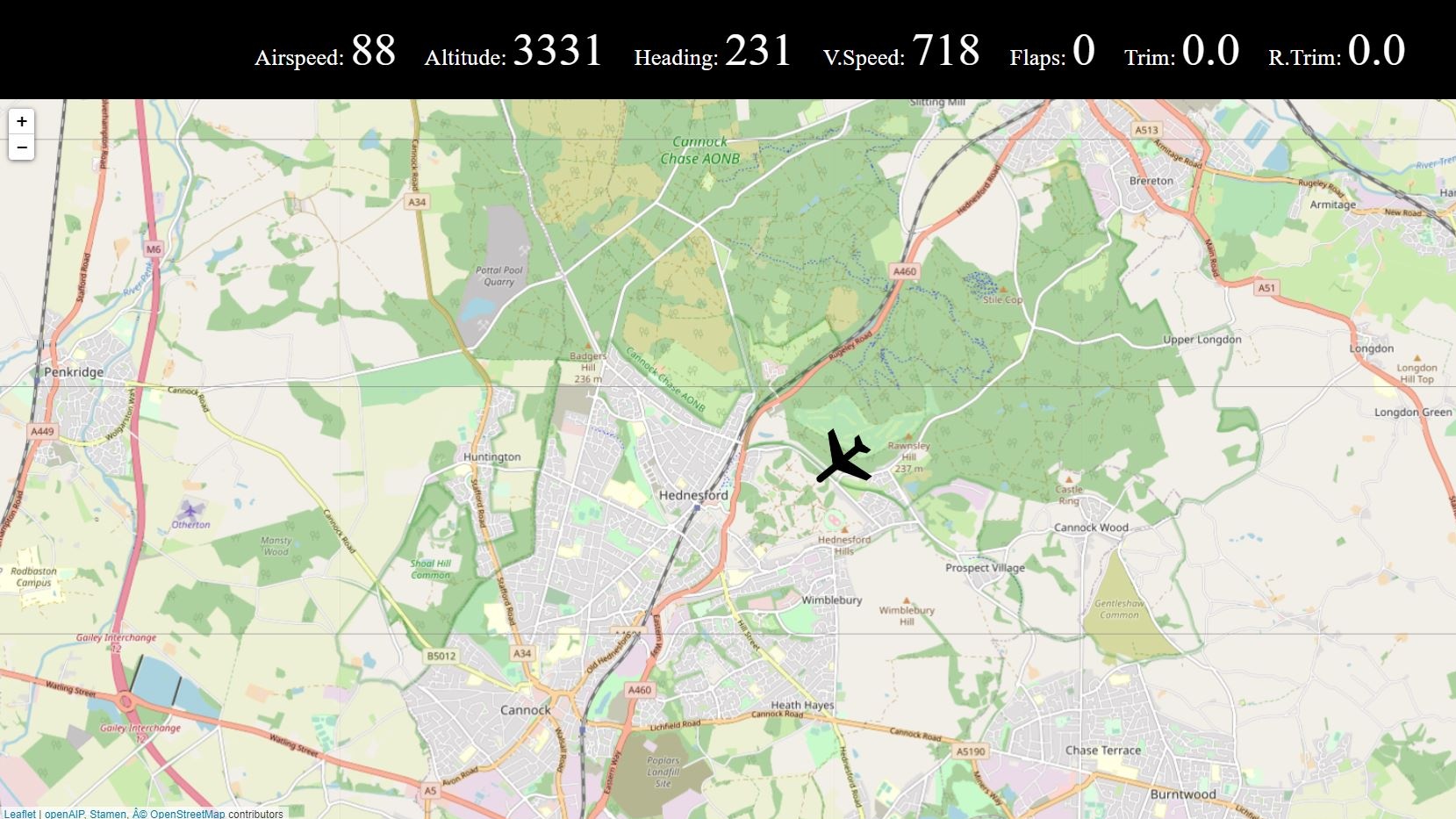