Winter has finally arrived in force in London, bringing with it some questions. Whose idea was it to live on the surface? Why would anyone wear a fleece without arms? What kind of monster thinks it's okay to make a coat with fake pockets, and why didn't everyone immediately kill him with spears?

Alas, these are not questions that Unknown Pleasures can answer. But if your local mountaintop hermit has no idea what the best new Steam releases are, you're in luck.

It's easy to misrepresent The Mind's Eclipse. It's a visual novel, or heavily stripped down adventure game. You wake up in an abandoned hospital with amnesia. You're joined by a helpful but snarky and faintly suspicious AI. The writing is competent but didn't exactly blow me away. You see how faintly damning it all sounds?

The story, in particular the mysteries it teases, is the main draw. The setting is Jupiter's moon Europa, long since colonised, and now apparently the scene of some sort of attack. Protagonist Jonathan Campbell is a scientist and/or doctor, a widower who did something in a bid to save his sick wife Hannah. Bionics and human augmentation are routine, some sort of Matrix/Better Than Life situation occurs with advanced VR, and it's pretty clear that Campbell did something Icarian.

It's that little space between the sum of all its parts where it comes together. The controls are fine, the 'puzzles' largely locked gates to keep you from skipping ahead until you've visited the key room. The moody music and sound bring that constant low dread whose absence ruins most bad horror games. The monochrome scheme should fit a clean space hospital, but this is a damaged, terribly wrong place, so it's juxtaposed with deliberately rough, loosely drawn lines. Hazy in the details just like your mind, not quite sure what's real and what's distorted by your augmentations.

This came damn close to going in the latrine marked "Zombie Shooting Arena", but that would be a grave error.

Serious Sam is perhaps the closest comparison. You dash around an arena full of demons, who obligingly wait for you to get close or attack. Shooting enough of them will open the exits, but you might opt to scour the level for money, weapons, and health first. However, if you dawdle too long, an absolutely terrifying incarnation of Baron von Blubba will appear in the form of a giant hovering skull, and chase you down.

Levels, items and weapons are random. You accumulate blessings and curses at the start of each level. You might choose a small chance your bullets will explode on impact, but next level have to pick a curse that charges you a fee for every hit you take. Some are dangerous double-or-nothing gambles, others inconsequential, but once you start surviving for a bit longer they can combine in unexpected ways.

Still Not Dead has a strange rhythmn. It's frantic but you have a lot of control over the terms of the fight. It's difficult but not sadistic. I'm not as taken with it as I should be, not least because I didn't seem to get a decent gun often and the default one lacks satisfaction. But it's an original blend of very familiar elements.

Minimalist Puzzle Game of the Week declines to crash through the wall and instead glows orange and gently plucks a harp symbolising its triumphant return. This time it's isometric Minesweeper. While it's surely impossible that this is a new idea, Delete does well with it. Each level presents a shape comprised of yellow squares, plus a few grey ones with a number on. You've played it, come on.

More complex rules come in, and buttons move parts of the level about. The challenge isn't taxing, nor enormously satisfying, but it's pleasant and well paced. Two slight flaws are compounded by a third; first, flagging a red makes the adjacent numbers go down, which will throw you repeatedly if you're used to Minesweeper rules. Second, there are occasional corners where you simply have to guess. Each would be acceptable, but Delete restarts the level if you click the wrong square three times, and this can get a tad irritating.

An annoying prologue is a dangerous flaw for Unknown Pleasures. I almost threw this out for the entirely trial and error introductory sequence, which gives you a few decisions, most of which kill you utterly unpredictably. And then you have to click-scroll through all that text again. Oof.

Fortunately, it gets better. It is a glorified choose your own adventure game, in which you swear revenge on the kingdom that killed your dad, and wander about the world trying to forge alliances and raise armies.

The pretty world map serves an abstract function, even if your actual position on it is meaningless. Interactive fiction should stand on its writing, but it certainly doesn't hurt to have a nice big map to look at and contextualise your journey. Most of these adventures involve saying the right things to people, some of which depend on skills. These are based on your behaviour in the prologue, rather than by mucking about with XP, so there's some replay value. A very simple turn-based battle occasionally pops up, but doesn't make much of a splash. It doesn't feel like an adventure the way, say, 80 Days does, (what does?) but I cared about my decisions and wanted to know what would happen next.

Unbrace yourself and retrieve the weary sigh that title probably provoked. Mere weeks since Chess of Blades, we've got another silly, funny game about gay aristocratic romance.

Prince Amir's parents are away for a while, leaving him in charge of everything. Assisting him are his general, his genderqueer spymaster, and a magical lizard called Barry. And while it absolutely is daft and utterly uninterested in a tangible game world, it's not the WACKY RANDIM LOL nonsense it may sound like.

There's a hint of Reigns, as you must balance four numbers representing the pillars of your realm - wealth, nobility, soldiers, and happy commoners - mostly by having your advisors go out gathering, but also by making decisions during your daily audiences. This isn't particularly challenging, but nor is it meant to be. Rather, the focus is on the plot and the outcomes of your decisions. Bad decisions aren't harshly punished, but can spiral a bit, and handling people well is vital, not least because Prince Amir is secretly gay, which is outlawed.

This is mostly handled comically, but not mockingly. Instead, the absurdity is emphasised, most notably with the regular visits from interested princesses, who must be fended off by a terrified Amir with absurd excuses like having a premonition that he'd die on his wedding night, or that he's Batman. There are more serious moments sprinkled in, but the focus is very much on being fun and a bit odd, and trying to be a good ruler, both to keep yourself going, and to build up the capital needed to maybe improve society for everyone.

It could use a little more structure. Something like Princess Maker 2's annual Harvest Festival and birthday would reduce the vague feeling that the other boot is going to drop at any moment. But then, perhaps that's an appropriate feeling, given Amir's predicament.

I'll be candid: I was quite disappointed this week. I'd never feature a game that I didn't think was good, but where previous weeks were closely fought, today's Pick of the Week is only contentious because I already picked Chess of Blades so recently. It's Your Royal Gayness. 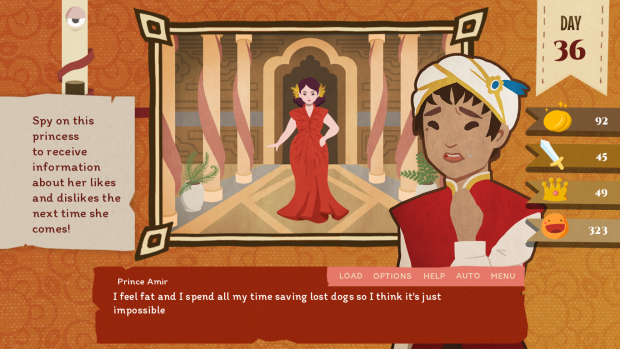 Some of its conversations may feel a tiny bit shoehorned, but I liked the mashup of casual kingdom management / decision making / visual novel subgenres enough to keep playing it for far longer than I should have. Now, if you'll excuse me, I'm off up a mountain to ask why the hell slide belts still haven't replaced the useless ones with the holes.