Roblox is a game creation platform that lets you create all sorts of wonders with only the thinnest knowledge of scripting. The results are many and varied, so it's easy to glance at the vast library and write off the whole set as a minefield of easy-cash scammers with characters that look Lego knockoffs. However, look further and you'll find plenty of examples of creativity just waiting to flourish.

The overall impression is of seeing the early drafts of tomorrow's great designers - where once the curious and determined turned to creating maps for Doom, or modding the original code for Sonic the Hedgehog, today they get their start in Roblox. We've already seen at least one developer hone their skills and build their community within Roblox's garden, before rebuilding their idea as a commercial project, in Unturned. To help you get straight to playing only the good stuff, we've put together this list of the best Roblox games you can play for free right now.

There are going to be a number of caveats to this list as I'm only going to be looking at those games that you can play for free. Those that require the currency "Robux" to play are a great way to give back to the developers, but we're going to focus on those that require less of a commitment from you. Some of these games do have micro-transactions however, so bear that in mind.

A vast majority of Roblox games have a similar theme: they're either town simulators of varying quality, fan games based on anime, or some very weird dioramas. Roleplaying is also highly encouraged in these games and while some can be potentially great - such as Ace Attorney role play - they're highly reliant on others playing in the spirit of the game. We'll therefore only be looking at ones that are pick-up and play without the need for gathering friends or finding a lucky selection of strangers.

Finally, I won't say that these recommended games are masterpieces. The gems that are worth playing in any selection of games aren't always perfect, and these are just neat ideas that will entertain despite their rough edges. So in no particular order, here are our recommendations. 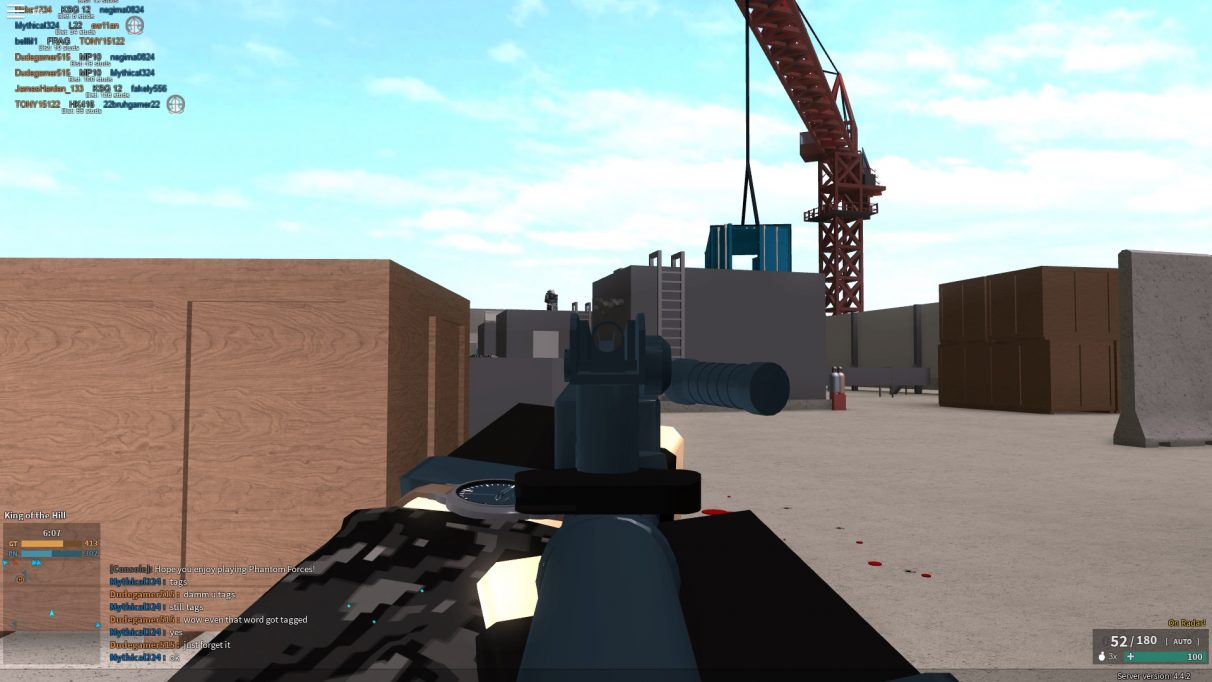 Phantom Forces from "Stylis Studios" is a first-person shooter that has you choose one of four different classes that you'd expect to find in a shooter like Battlefield, but the mission objectives are as frantic as Call of Duty's multiplayer. Game modes include King of the Hill, Deathmatch, and Capture the Flag on a fair number of maps.

There's a lot of potential for those who want to invest more time into it to get new weapons at different ranks, and there's been some work done on the game as recently as May 2019. I'd like to have seen the weapon selection up-front be a little more open, as the weapons available to new players are limited, but I was able to get some good kill streaks with a light machinegun. I'd also like to see them experiment with new game modes, as experimentation is the beauty of Roblox, but what's here is a good base. 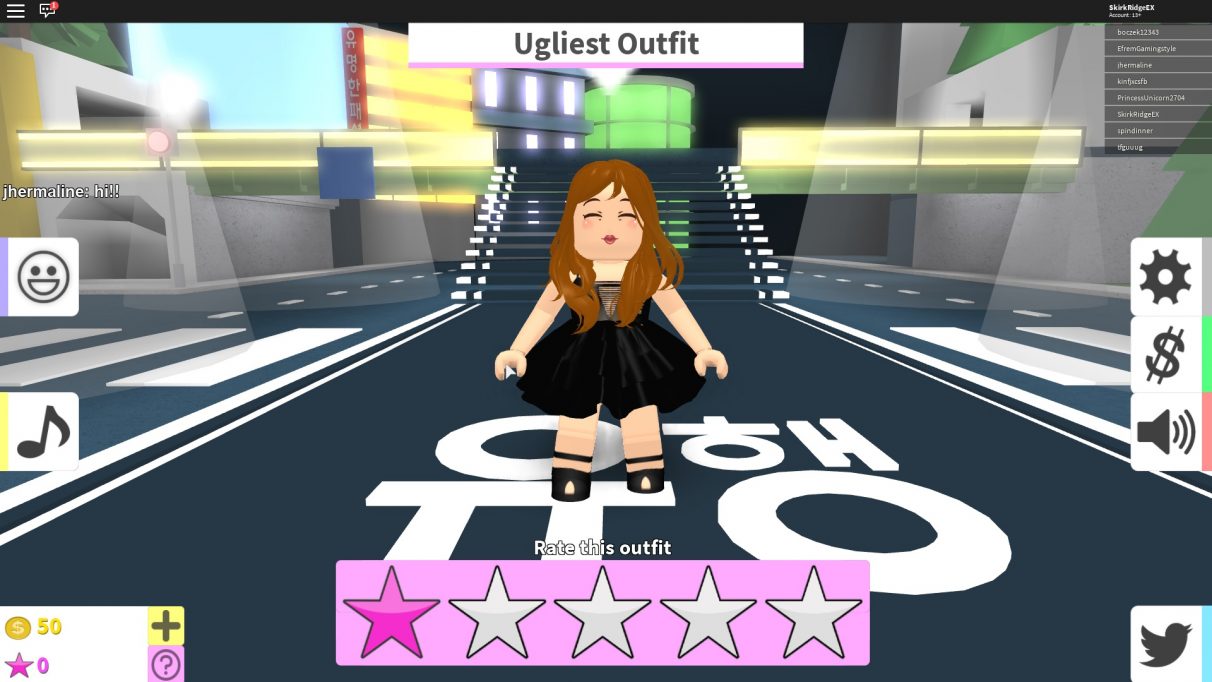 Formerly known as "Fashion Frenzy", Fashion Famous is one that has been highlighted on RPS before. It's a multiplayer game in which players have a theme that they must create an outfit for, by dressing up in some of the pieces, dying their hair, and applying some accessories/faces. A lot of the more interesting items are locked behind a VIP area that does require Robux to purchase, but it's a one-off purchase, unlocking the special VIP room forever. Once you've created your outfit, or when time runs out, everyone struts their stuff on the catwalk, before being judged by their peers.

It does have a bit more of a social element, as the winners of each catwalk challenge are determined by the other players - I had one game where the person who won did so because they said it was their first time playing. But if you're with right-minded people and you establish some ground rules to keep everything fair, there's a lot of fun to be had. 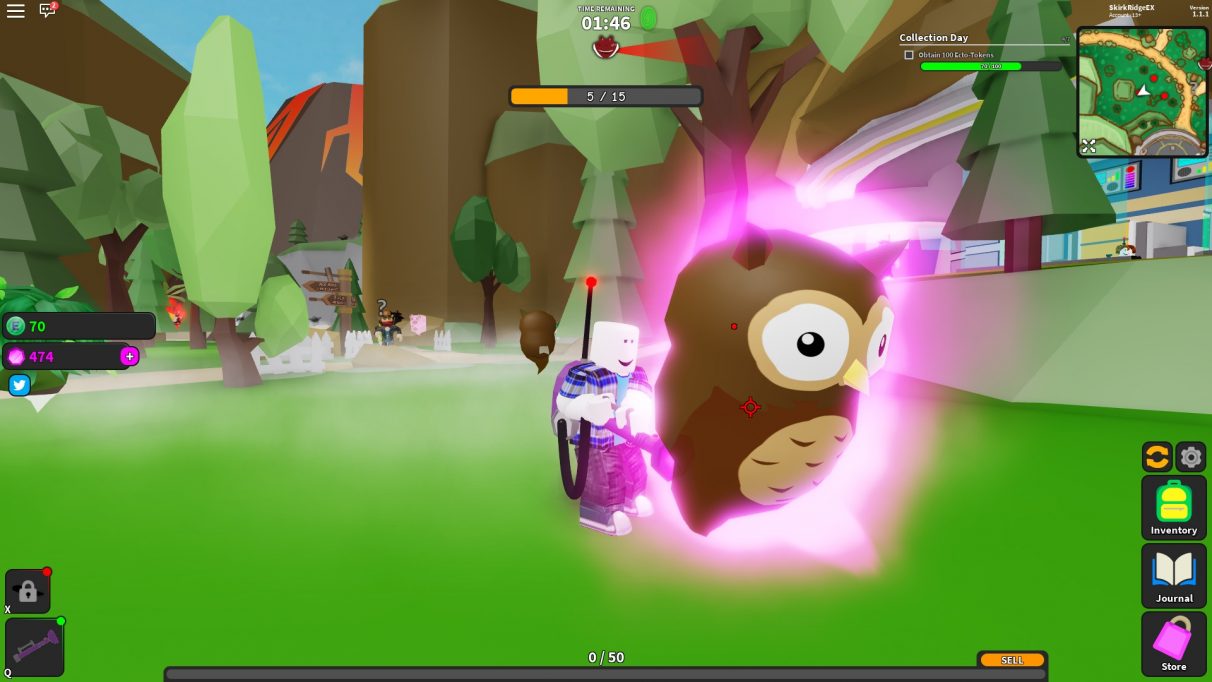 There are a lot of Roblox roleplaying games that are structured around fetch quests, and which gate features away from those deemed unworthy. Ghost Simulator from BloxByte Games tasks you with completing quests for rewards by sucking up ghosts with your vacuum cleaner.

Each world is an assortment of towns, forests, junkyards, and deserts, all filled with themed ghosts to cleanse the neighbourhood of. The ghost designs are adorable, with my favourite being the owl that looks constantly surprised by the fact you're trying to hoover it up.

Ghost Simulator has more in common with clicker games than Luigi’s Mansion, as you only need to click on a ghost to begin sucking it up. You don’t need to move or wrestle it into submission, Ghostbusters-style. Obtainable pets and upgrades expedite the process, but unlike some other click-and-upgrade games in Roblox, this one feels more game-like thanks to at least the illusion of “fighting” enemies. Bosses do appear occasionally, where you need to work together with others to avoid attacks and defeat it within a time limit. 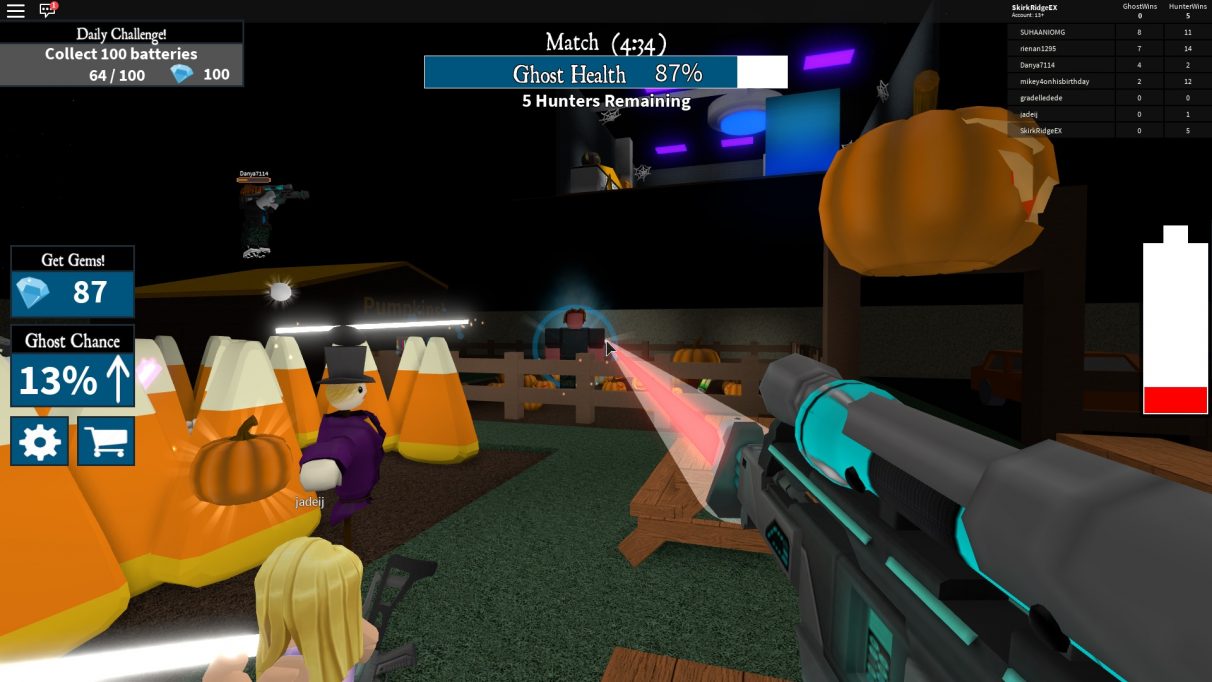 Haunted Hunters from Hidden Powerup is an asymmetrical multiplayer shooter which pits five hunters against one ghost. The idea is for the hunters to kill the ghost before the ghost kills them. Hunter's lasers are battery powered, meaning they need to keep their stocks filled to defeat the ghost. In the same vein, the ghost has powers on recharge, but can only recover lost health by grabbing and holding a hunter player.

The progression of new abilities comes at a decent pace and there's plenty to do in the lobby between rounds, such as testing your laser against proxy ghosts and buying new upgrades, including pets that can detect ghosts nearby by spinning around. Being the ghost can be a little unfair if you get a rather open map, but generally there are enough corridors to lose the hunters with. This is worth grabbing friends to play for a few rounds. 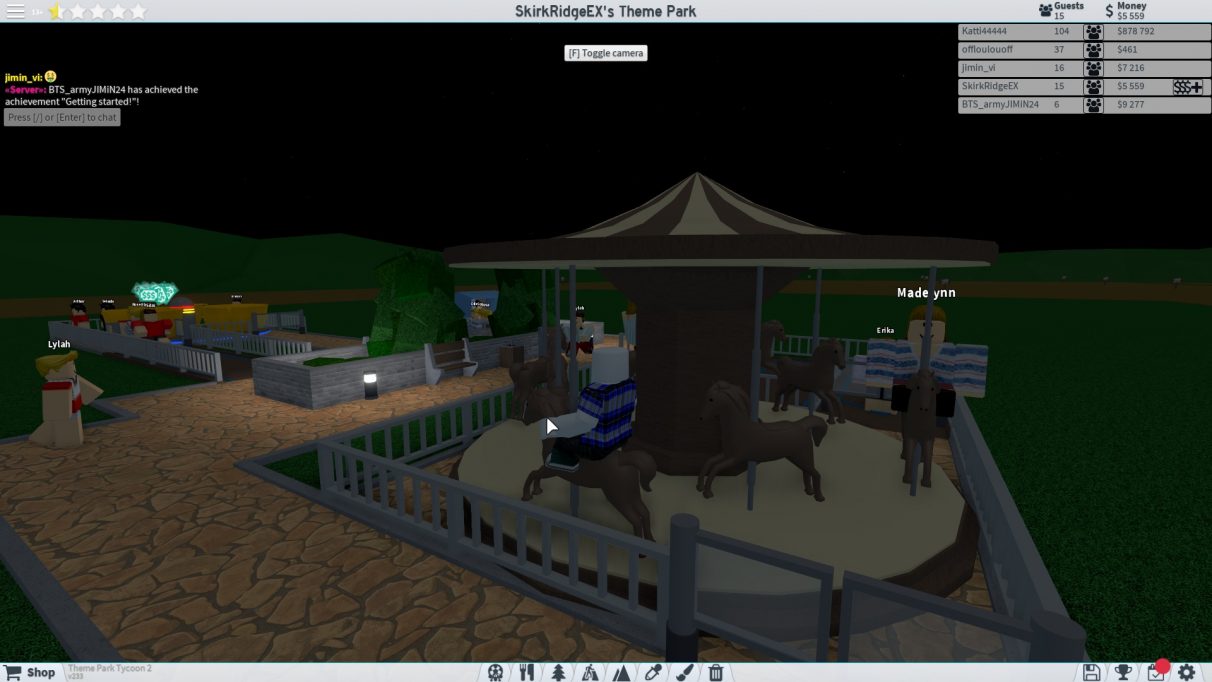 Theme Park Tycoon 2 from Den_S is what you'd expect from a theme park management simulation, but what made me smile about this one is the fact you can build parks cooperatively with others. There are plenty of other simulation games that either have decent approach to managing the establishment you're trying to build, or have that multiplayer focus, but for me this one seemed the most fleshed out.

This does need a little more optimisation with some of the item placement - it can take a while for a path to appear once you've plonked it down. It is also very tricky to get the roller coasters to sync up properly compared to the likes of Planet Coaster, but it's a decent effort. 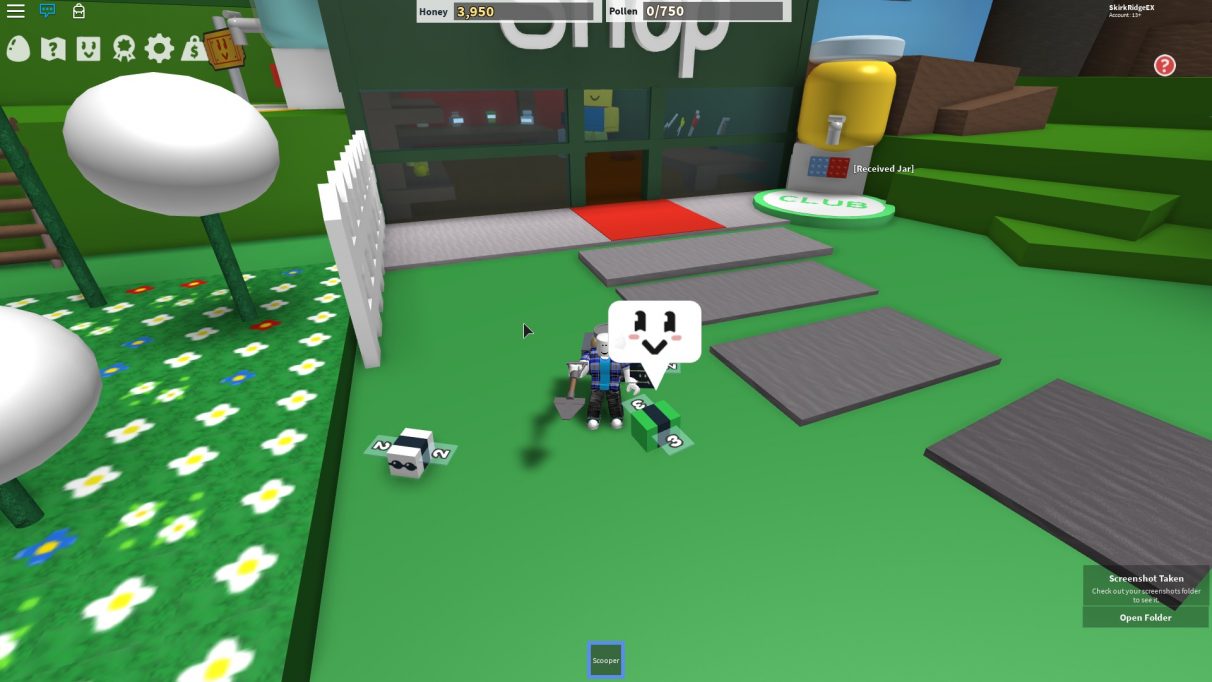 Bee Swarm Simulator is very much in the same vein as Ghost Simulator, but it has a lot more charming ideas. Onett's creation has you wander around grassy fields and can raise different species of bees, upgrade their abilities by feeding them fruit, and even take on enemies with your little bee army. They sort of act a little like Pikmin, only they don't require you to throw them at the enemy to get them to attack.

It very nearly carves out its own niche, though the collectable quest objectives do fall into the same trap of being repetitive - even if they are mostly given out by oversized bears. 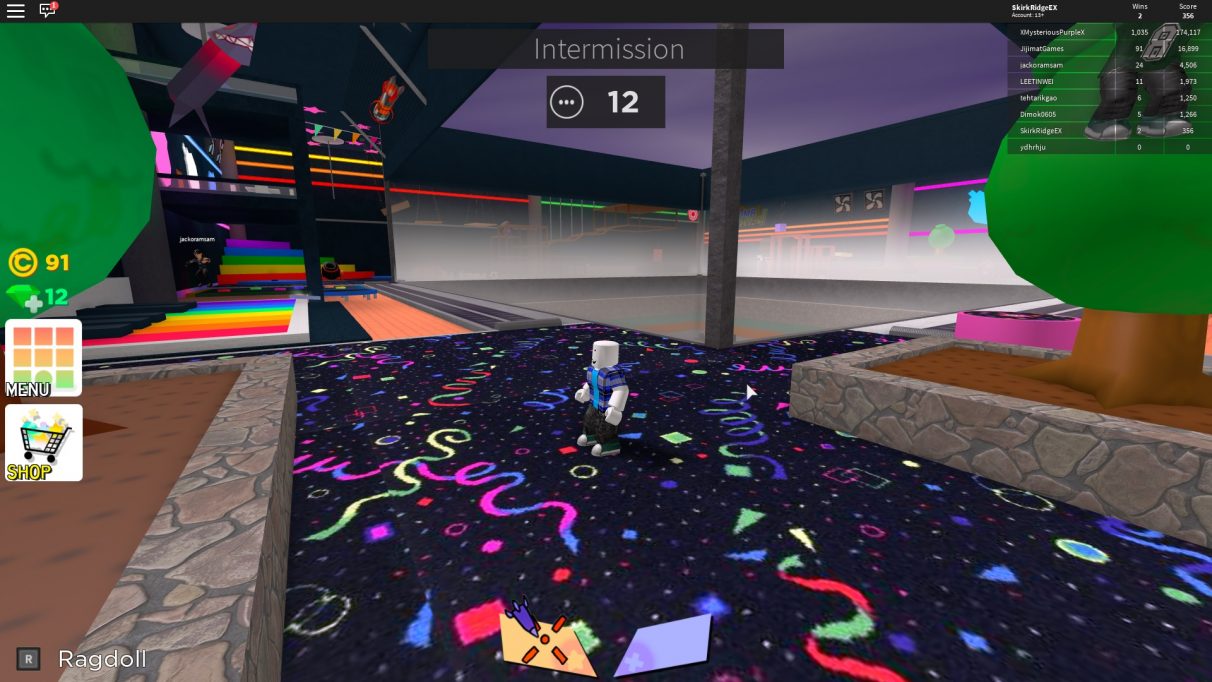 While the game itself isn't all that special - you run away from explosives until the timer runs out, messing with other players with your own bombs - special credit goes to Polyhex's Super Bomb Survival lobby. Many multiplayer Roblox games have their own distinct lobbies that are a mix of labyrinthine corridors or densely packed rooms.

With Super Bomb Survival, it's an early 90s arcade that surrounds the main game world, but has a bunch of physics-based attractions, such as a giant piano, travelators, and a climbing frame. It also has a cannon that you can launch yourself across the screen with. It's perhaps more fun messing around with the obstacles than the game itself, though the game does invoke a little bit of Bomberman. 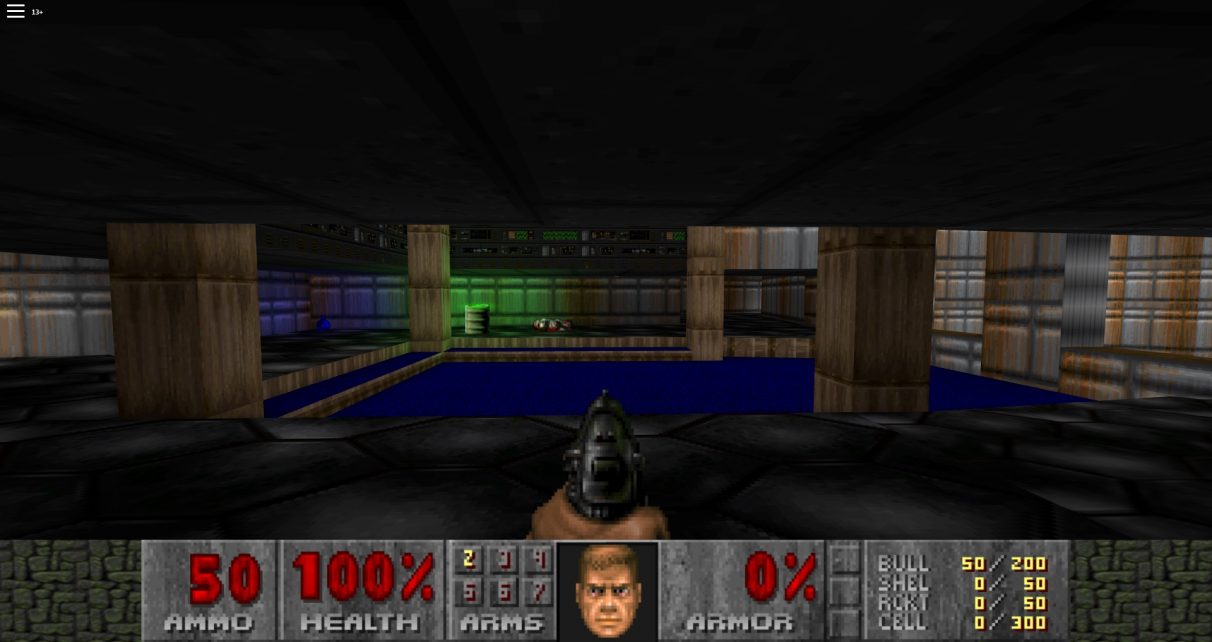 Where would we be without some kind of Doom recreation? PoptartNoahh's "RooM" is more like Brutal Doom than the classic game, but it comes with a whole host of modes. You can play a survival mode in one of the many included maps or you can just go frag crazy in the classic Doom style deathmatch modes.

What's impressive about this is just how unlike a Roblox game this manages to look. No blocky men in sight. No usual Roblox trimmings. It merely uses Roblox as the platform and it does make you wonder what else is possible. 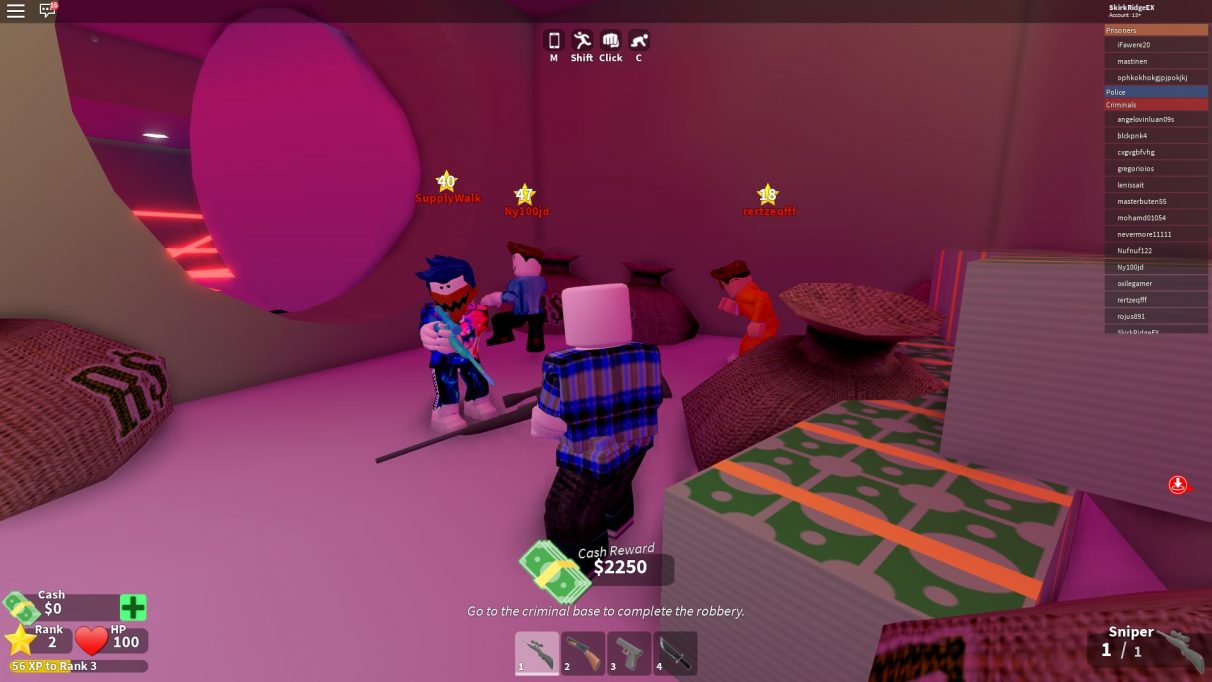 Ever wanted to bring criminals to justice, rob banks, escape from prison, or even take on evil as a superhero? Mad City by the unfortunately titled "Schwifty Studios" has all of this and it's just as crazy as it sounds, provided not everyone is a criminal. Think of it as a sort of GTA Online lite, only other players take on the roles of the police trying to bring the bad guys down.

The map is huge and even comes with a secret hero base for superheroes to choose their powers, bases for criminals to hide their money away, and multiple facilities for the bad guys to rob. This is another game that's hidden behind a lot of ranking-up guff, but you're at the very least able to play enough of it to get a good idea of what it's going to be like if you persist or pay up. 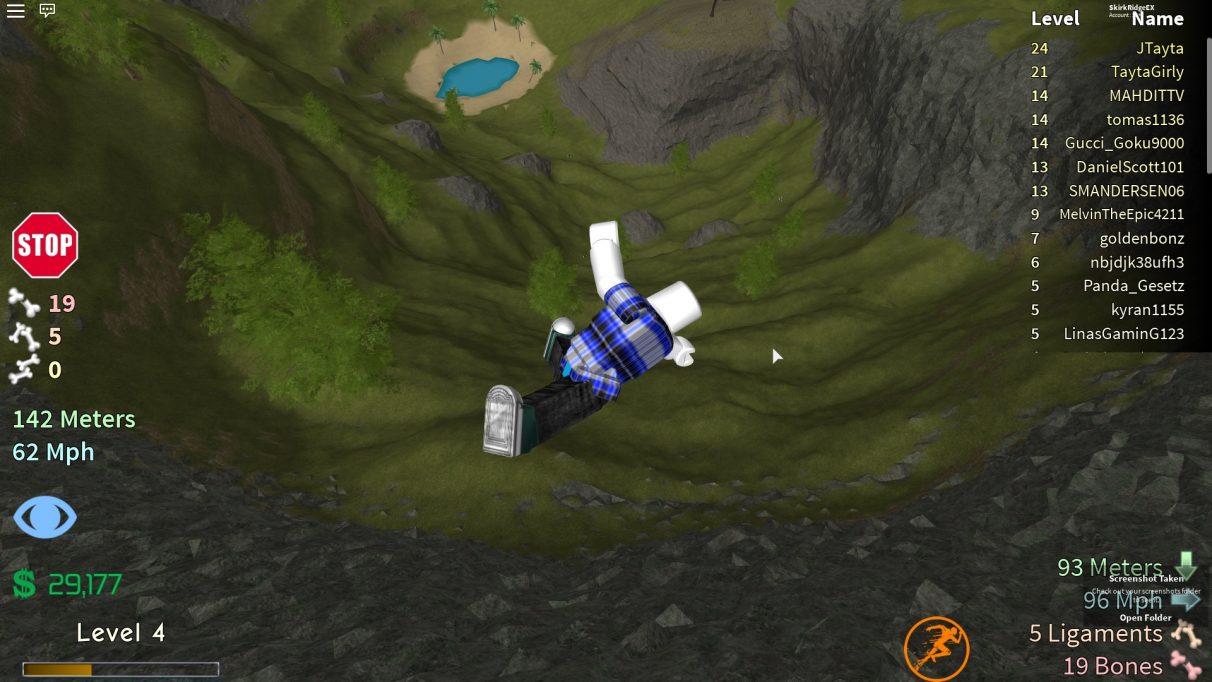 Remember that mode in Skate 3 where you could break all of your bones by jumping off tall things? Someone has made four of these in Roblox and the idea is to just break as many bones and ligaments as is possible. It's not purely about getting a high score, but Broken Bones IV has some progression, as cash earned for bone breaking unlocks more control over your character as they fall, as well as access to higher-off-the-ground areas that are otherwise gated away. You'll probably spend little more than a few minutes on this, but if you miss the days of early indie darling Stair Dismount, this is a good way to recreate the experience.

And those are our current picks of the best games on Roblox. If you have any recommendations for games in Roblox that we've missed somehow, drop a comment in the comment section and I'll be sure to check it out. After all, this is an evolving list, and we can always update it later.