The best SMG in Call Of Duty: Cold War is already a hotly debated topic. Most players seem to be opting for the MP5, but we suspect we've found a gun that's even stronger right now, and you may want to give it a try yourself before you make up your mind. Take a look below, we're we'll rank every SMG in Cold War from best to worst.

So far, we have to disagree with the majority of players out there: the best SMG in Cold War is the Bullfrog. Best-in-class ironsights, magazine capacity, accuracy, and range puts this gun just above the MP5.

We'll talk more about the Bullfrog and its competitor SMGs in a moment, but first let's take a quick look at the stats of each weapon using this table from our Cold War weapon stats page.

Now we can walk through each SMG in turn, from most to least effective in Cold War's current meta. 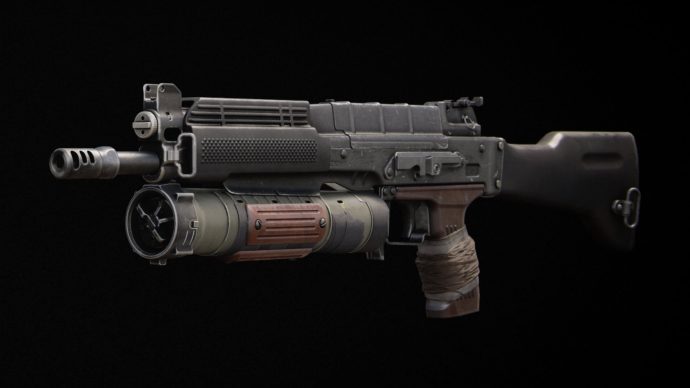 In an early meta dominated by the ever-familiar MP5, so many players seem to be overlooking the Bullfrog. This beast of a gun may not win out on pure DPS, but it features the best accuracy and effective range of any SMG, the largest magazine capacity, the second fastest rate of fire, brilliant ironsights, and higher damage per shot than the MP5. Kit it out for bullet velocity and range, and its precision will give you a far greater chance of hitting those headshots than any other SMG in Cold War right now.

Check out our guide for building the Best Bullfrog class in Cold War.

The MP5 is nearly as powerful in Cold War as it was in Modern Warfare. A startlingly high rate of fire makes up for low damage, and it's more than accurate enough for close-quarters engagements. The only reason the MP5 doesn't take the top spot is because its bullet velocity is so low that you have to make it the focus when adding attachments. But the MP5 deserves its spot as the most popular SMG - if not quite the best in our books.

Check out our guide for building the Best MP5 class in Cold War.

The AK-74u stole some hearts in the Cold War Betas, and it's certainly got a kick. Significantly higher damage per shot than the MP5 or Bullfrog, and not a terrible rate of fire either. In fact, apart from the burst-fire KSP, the AK-74u's time to kill is the best in its class. Where this SMG falls a bit short is its very low effective range and comparatively high recoil, both of which must be addressed with attachments.

The Milano is like the AK-74u, but more extreme. To show how close together these guns are in the tier list, I'll reveal that the Milano was my go-to weapon in the Cold War Betas thanks to its excellent damage and low ADS time. Unfortunately it's shunted near the bottom of our tier list thanks to its low rate of fire and high recoil.

The KSP 45 can certainly be deadly, but the very idea of a three-shot-burst close-quarters weapon rebels against my brain. Perhaps that's the only reason I can't get on with it, but I doubt it. Despite having the highest damage per shot and potential time-to-kill of any SMG, the KSP is a very unforgiving weapon with extremely low bullet velocity and unpleasant recoil.

That just about wraps up our Cold War SMGs guide. But that's not all we've got to offer when it comes to the latest Call Of Duty installment. Why not check out our Cold War Zombies guide while you're here?