SMGs often play a key role in your Warzone loadouts. Paired with Assault Rifles and snipers, you’ll be using submachine guns a whole lot in your Warzone adventures for close-quarters combat.

This Best SMG in Warzone guide will walk you through the stats of all the SMGs in the game, before letting you in on the reasons behind the very best and worst Warzone submachine guns.

The best SMGs in Warzone

The best SMG in Warzone is the MAC-10. Prior to the Cold War integration we had a pretty solid idea of the very best SMGs available, but now we’ll have to take more of a look into the best SMGs in Warzone. First though, here’s some stats from our Warzone Weapon Stats guide:

Right then, now let’s go through all the SMGs in Warzone from best to worst then! This’ll be fun.

The first new weapon added after the Cold War/Warzone merger, the MAC-10 doesn't have the largest amount of damage per shot. However, this gun's ludicrously fast rate of fire absolutely makes up for this, completely wrecking shop at close range and offering a ridiculously fast time-to-kill in Warzone. You also have extremely fast mobility stats and can kit this weapon out to be amazing in all situations. Pair it with a ranged AR like the CR-56 AMAX or a Sniper Rifle like the LW3 - Tundra and you'll be a monster in the final circle.

Check out our best MAC-10 loadout guide for more tips and advice!

The MP7 isn't the most powerful SMG, with a pretty low damage-per-shot in comparison with its rivals. However, it's extremely easy to control, to the point where most players will be able to hit their shots at a decent mid-range.

This is the MP7's main advantage over the MP5 and others in its category. Most SMGs have a tendency to bounce quite a lot between shots, but the MP7's bounce is almost negligible - particularly when kitted out for recoil and range. Added to this is a high base magazine size and extreme rate of fire, both of which more than make up for the MP7's low damage profile and ensure its place as one of the strongest weapons in Warzone.

When it comes down to it, SMGs are meant to be used in close-quarters encounters. And at point-blank range, you can't do any better than the MP5. Its recoil is significant, but it has one of the fastest time-to-kill stats of any weapon in Warzone.

You can definitely kit out the MP5 for range, but to be honest I prefer to use it with an Assault Rifle or LMG capable of handling mid-to-long ranges, and kit the MP5 out purely for extremely close quarters dominance. This is where the MP5 becomes truly unmatched, but it does rely on you picking the right times to use it. Attempt to outgun a Grau with an MP5 at 50 metres and you'll be punished. But force that 50 metres down to 5, and it's a very different story.

Check out our Best MP5 loadout in Warzone guide!

This weapon completely destroyed everyone in Cold War at launch, and post-nerf it still does a solid job. If you want an SMG that does what it says on the tin in Warzone, the Cold War MP5 will give you exactly that. Some people even prefer it to the Modern Warfare version, but its slightly lower bullet velocity and slower aim-down-sights speed means it struggles head-to-head in some cases.

Still though, the Cold War MP5 will serve you very nicely if you've gotten used to it.

The Bullfrog has some shockingly good damage output, and as ground loot it’ll absolutely dominate. It’s also amazing in squad-based modes when you deck it out with a proper loadout too, as by default it has a chunky magazine which allows you to take down entire squads if they get in your way. This rangey SMG hits damn hard, and shouldn’t be underestimated.

Check out our guide for the full rundown on building the best Bullfrog loadout.

The LC10 doesn’t stand out massively in the way of stats. It’s got a solid time-to-kill that’ll serve you decently when you get the drop on your enemies, and it’s pretty mobile as well.

The thing with the LC10 is that it’s so damn usable. I don’t know what it is, but this weapon feels fantastic to use against enemies. It’s a combination of how surprisingly solid it is at range to be honest, and I’ve had a great time gunning people down with it both in loadouts and as ground loot.

Check out our best LC10 loadout guide for tips on how to kit this thing out too.

Introduced at the beginning of Season 4, the Fennec quickly made a name for itself as the fastest-firing weapon in all of Warzone. On paper, this beastly close-quarters SMG outranks even the MP7 by featuring the same damage profile but firing out a stonking 1100 bullets per second, compared with the MP7's 950. And it's fairly controllable, to boot.

Why, then, is the Fennec not the faraway best SMG in Warzone? Because its low magazine size combines with its fast fire rate to make a seriously unforgiving weapon which proves not nearly as reliable as the MP7, nor the MP5 in my opinion.

Shortly after Warzone began, players realised that the AUG had hidden potential as one of the strongest top-of-the-meta guns in Warzone. It's always been a powerful and reliable SMG, but the revelation was specifically with the AUG's 5.56 conversion kits, which inexplicably give the AUG the fastest time-to-kill (from 250 to 0) of any weapon in Warzone.

In reality, I find it doesn't quite match the strengths of the MP5 or the MP7, but the AUG is still a popular choice and a true force to be reckoned with. This is the one gun I'd consider using in place of an Assault Rifle or LMG for mid-range combat, because a 5.56 AUG with the longest barrel and a Monolithic Suppressor can go toe to toe with the very best Assault Rifles in certain situations.

Learn how to shred with this killer SMG in our guide to building the best AUG Warzone loadout.

This SMG deals really good damage per shot, allowing you to 5-shot kill fully-armoured enemies if you hit every headshot. Your fire rate is solid too, at 730RPM, so these shots will come out pretty damn fast. It's actually usable as an Assault Rifle alternative, much like the AUG SMG, and if you boost the magazine capacity and bullet velocity with attachments, the AK-74u can hold its power and rival ARs if you hit those shots.

Make the most of this tiny beast with our guide to spec'ing out the best AK-74u loadout.

The P90 offers probably the smoothest and most controllable recoil of any SMG in Warzone. Taking a similar path to the MP7, it combines this smooth recoil with a very fast rate of fire and naturally high magazine size, all three of which are designed to make up for the gun's low damage per shot.

Make no mistake: the P90 is a pretty wonderful SMG. The reason it's lower down in this list is that it tries to beat the MP7 at its own game, and marginally fails - thanks mainly to its mediocre attachment options and its poor damage dropoff values, which drastically reduce the P90's damage as you head towards mid-ranges. But the P90 is still very capable of wiping out entire teams at close range.

The Uzi has some very interesting qualities. Its unique magazine attachment means it offers a seriously competitive time-to-kill with fantastic speed and handling, making it potentially amazing in the right hands.

The only real issue holds this gun back significantly - the magazine capacity. It caps out at 32 with the unique ammo type, meaning you won't be able to completely cap enemy squads without having to duck away and reload, which can make all the difference.

I actually love using the Bizon, and wish I could have placed it higher up on this list. It's nearly as controllable as the P90 but with the added benefit of much better damage over range. And it boasts the highest magazine capacity of any SMG, which is a very important factor when it comes to fighting multiple enemies at once in Warzone.

Unfortunately, it comes down to the fact that the point of an SMG is to dominate at close-quarters combat, and from this standpoint the Bizon is handily beaten by the MP5 and the 5.56 AUG. The Bizon's strengths relative to other SMGs is that it's more like an Assault Rifle; but then, why not just use an Assault Rifle?

The Milano has high damage properties, but its low fire rate means your actual DPS is pretty low. Outmatched by a lot of its rival weapons, the Milano 821 can't really handle tight firefights, and unless you're up against an enemy with a low-mobility gun (the Milano has great ADS speed), you won't be able to pour enough damage into your opponent fast enough.

Regardless, you can still make the most of it with our guide to the best Milano 821 loadout.

The struggle of the ISO, Season 5's addition to the SMGs roster, is that it tries to be the best close quarters gun in a class that already contains the MP7 and the MP5. It lacks the fire rate of the MP7, the damage of the MP5, and the reliability of either. Another large thorn in the side of whoever uses an ISO is its poor magazine size, which forces you to sacrifice an attachment slot and slow down your handling in order to make up for this deficit.

It can still rip players apart - as can all SMGs in Warzone. And the recent buff to the gun's ADS walking speed and your movement speed with the 50 Round Mags was welcome - albeit not nearly enough to make this a top-tier gun. The mismatch of better range but higher recoil than the MP7 makes this a strange choice for most Warzone players.

It's a shame this is a 3-round burst fire weapon then. You can 4-shot headshot a player at close ranges, which sounds brilliant, but a 4-shot kill on a 3-round burst weapon just means you might as well 2-burst them, drastically reducing the gun's efficiency. On a personal level, it's just not as satisfying to use as the likes of the M16 and Cold War AUG, and it doesn't hold damage at range as well. It's a weapon that doesn't do anything amazingly, unfortunately.

It's true that with all the right attachments you can make the recoil of the Striker fairly solid, but it requires you to sacrifice so many slots to the cause, and the end-result will always be something that is outclassed by any SMG at close range, and outclassed by any Assault Rifle at longer ranges. It's just not worth it. 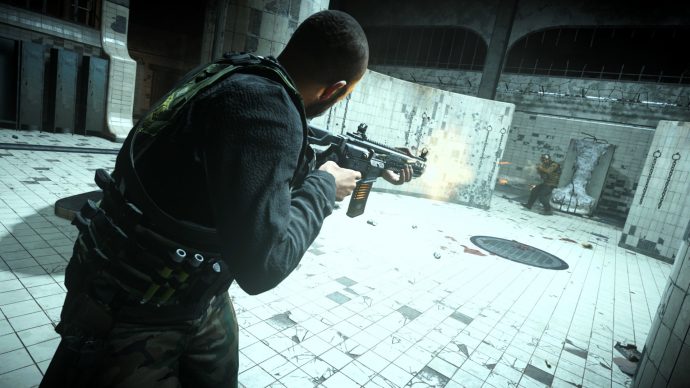 And there you have it! Hopefully now you're a master of the SMG's arsenal, and you're ready to put your newfound knowledge to the test. But in case you're still hungering for tips and stats, be sure to check out guides to the best Warzone guns and weapon stats.