The Binding Of Isaac: Rebirth (plus Afterbirth add-ons) is very much my jam right now. It's been in my life for a while, but December (and now January) was when I fully committed to it. By which I mean 'it took over almost my entire life.' I've seen so much, I've killed so much, and I've been killed by so much. I have a degree of skill at the game I never believed possible (and which, clearly, pales into insignificance against that of longer-term players), but even so, there are certain enemies that always, always give me grief, even as I am able to face down far great horrors.

I say enemies. I mean dicks. Absolute, total dicks who have humiliatingly cost me victory on more occasions than I could ever admit to. These are those dicks. 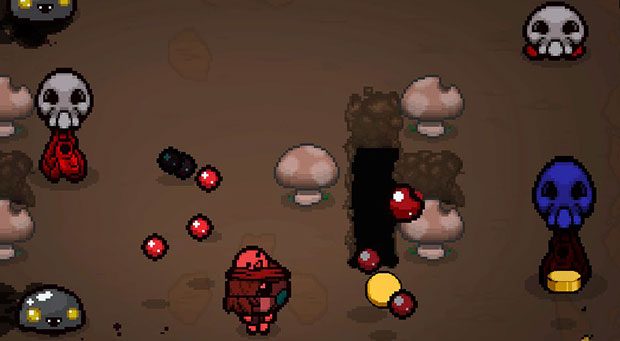 Man, I hate these guys. In their standard spawn, they can't move anywhere by themselves, though this is half the problem. If they're tucked behind a rock or a turd, you'll have to run right up to them - at which point they pop out of the ground and lob a spray of blood-bullets at you. If you're too far away from them, they remain stubbornly tucked under an indestructible skull, which means they can never be taken out from range. When there are other, roaming enemies in the room, these dicks are the worst, as you can't even run away safely. 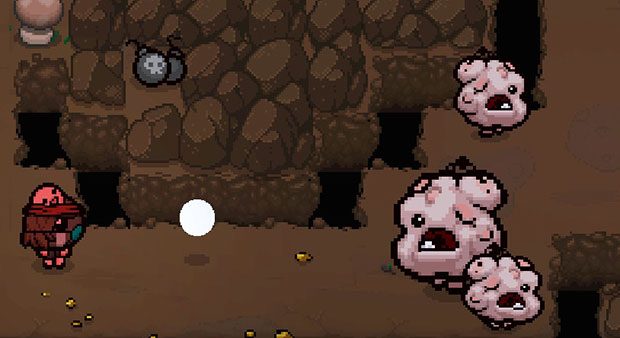 Man, I hate these guys. I hate them not because they're particularly dangerous - they have no direct attack, after all - but because they run away from me on sight, sporadically spawning spiders, flies or slugs as they do. Until they're dead, the room will just keep on filling up, which means I need to hound them down, hectored by their spawns all the while. But that's not really the reason I hate them. I hate them because there's a variant which explodes if I touch it - and, in the split-second it takes me to realise I've encountered the suicidal rather than cowardly variety, the dick's already sprinted right into me. 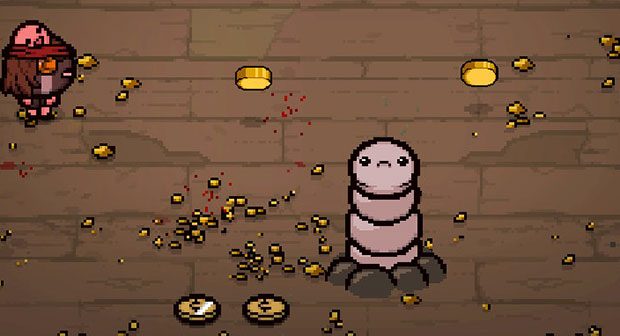 Man, I hate this guy. He's one of surprisingly few Isaac baddies that actually resemble a dick - which is appropriate, because he's a dick. In my experience, once you learn their patterns, many Isaac bosses tend to be easier to manage than a roomful of random spawns, but Pin (his actual name) frustrates because his movements are that much more random. He spends most of his time burrowed underground, randomly either erupting Jaws-like from below and sailing over a sizeable section of screen while spraying bullets, or simply popping up, hanging around for a few seconds and lobbing predictable shots. Basically, it's a blind guessing game of where and when he's going to pop up, which usually needs doing at least half a dozen times. 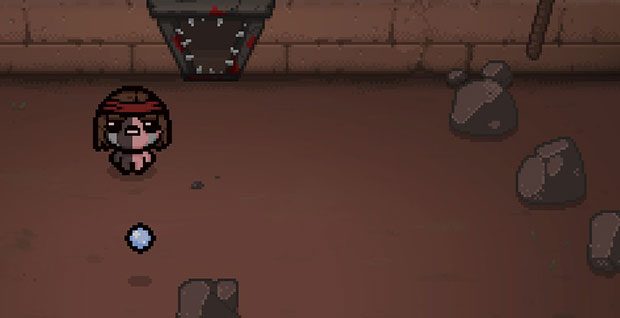 Man, I hate this guy. I don't mean the door - I mean myself. I hate myself because I cannot resist running through a door framed with spikes, knowing full-well this will damage me on both the way in and the way out, but unable to resist the potential goodies stored beyond it. I also hate myself because I do this knowing full-well that, more often than not, all I'll find in there is a couple of angry spiders or a self-detonating bomb.

Man, I hate this... log fire. Usually, Isaac fires are harmless so long as you don't run right over 'em, but once in a while there's a bright orange variant. Which sporadically spits a semi-homing shot at you. Rare is the time I outright fail to notice that there's an orange fire on the scene, but all too often there's a row of enemies in front of it. It usually takes around three shots to take out a fire, which are hard to line up when all those other dicks are in the way. Which means that I always always, end up taking fire-spit in the back of the head while I'm dancing with everything else. Or, alternatively, I get so paranoid about the fire that some ambulatory horror stomps me to death while I'm trying to extinguish it. 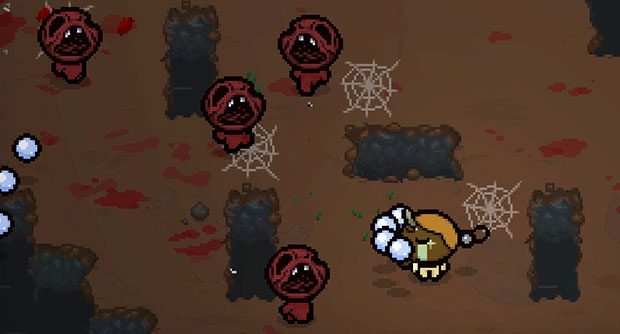 Man, I hate this respawning guy. He can't shoot, but he sure can sprint, able to stick right to the heels of even the speediest build, but that's not the problem. The problem is that, when killed, he turns into what looks like a mistreated liver on the floor, which will in turn fully recover into a sprinting red git if I don't land a few good shots on it first. Trouble is, self-healing dick never appears on his own - there's always a pack of them, with the others sprinting in front of the liver before I can take it out. It all gets a bit Benny Hill, basically, as I'm chased round and round and round by the same guys, often needing a canny bomb or power-up to finish 'em off before they can start the farce all over again. 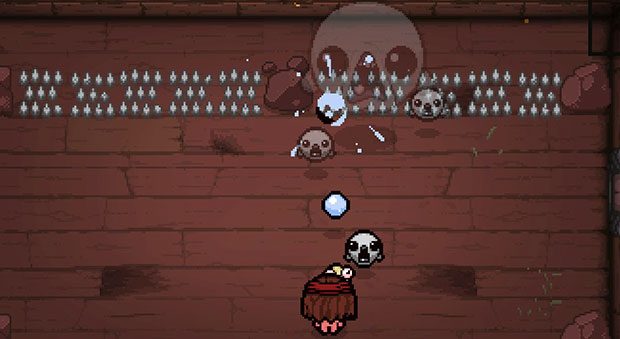 Man, I hate this ex-guy. Again, most Isaac bosses are a cakewalk for me these days, and The Haunt, as this big ol' spook is officially known, is technically no exception. But jeez, he's so boring, it takes so long to kill him and that invariably leads to disaster as my patience crumbles. He's indestructible until you take out his three micro-ghost-dick chums, who themselves are irritatingly speedy and bouncy, at which point he retreats to the top of the screen, behind a row of spikes. Then he slowly moves left and right and back again and again, occasionally spewing a death ray. There's a visual warning before he fires, but the sheer tedium of tracking him back and forth and back and forth and bleh means I've glazed over after a few passes and wind up with a death ray in the face. 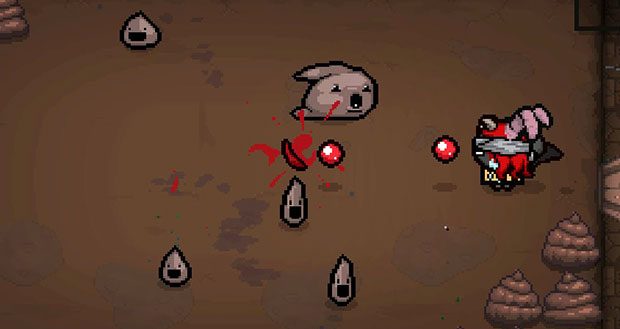 Man, I hate this turd. Pardon my French, by the way. The single most harmless enemies in Isaac are what I call turdlings, tiny little poo drops with permanent smiles and no particular inclination to hunt me down. But their evolved form is what I call Turdo, a large, aggressive blob of ambulatory excrement who can unexpectedly burst into the sort of the speed that you'd think impossible from last night's curry. And then he just keeps on going, pinging across the screen like a nauseating maniac, hard to dodge and adding to injury the insult of having been murdered by shit. (The even more evolved form, the boss Dingle, is much easier to deal with because he's so much larger, so easier to land shots on despite all the hitpoints).

Man, I hate the front of this guy. I hate it because it's covered in some sort of bone armour which means I can't damage him. The only way to take him out is to shoot him in the back of the head, which is easy enough when there's only one, but an exhausting dance when there's several or anything else in the room. Certain power-ups will damage the face too, and I live for those. 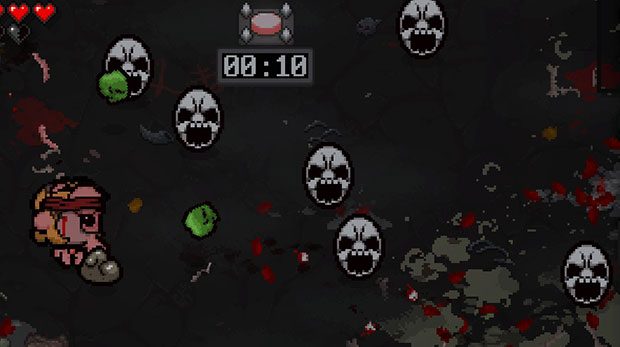 Man, I hate the front, back, left and right of this guy. The inevitable next step from the above, this one cannot be harmed by almost anything. The only way to get rid of 'em is to slaughter any other foes in the room, which is far easier said than done when there's a half-dozen invincible skull-balls flying about the place.

Man, I hate this eye. Its laser covers the entire length of the room, which basically means that you're getting hit no matter where you might be. It's one of those that takes just a couple more shots to kill than you'd suspect, and my inability to entirely remember that has been the cause of many a late-game death. 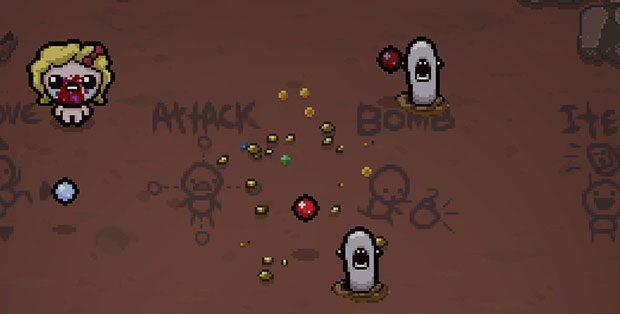 Man, I hate this what looks suspiciously like a certain part of a guy. The most penile enemy in the game (in my experience so far, at least), it's a sort of flaccid mole-thing that burrows, pop-ups and fires what seem to be semi-homing shots. It's chasing 'em down before they disappear again that really sucks - if I have a build with poor range or slow shots, too many of these guys can mean curtains even if I'm otherwise a powerhouse.

The absolute worst dick of all 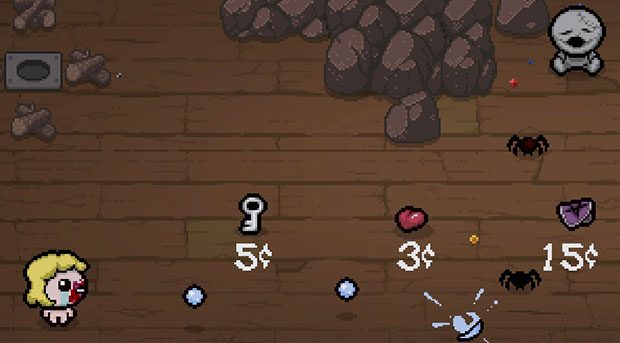 Man, I HATE HATE HATE HATE HATE this guy. By which I mean, 'tiny spider who can't even shoot, die after a couple of hits and who you probably encountered in the very first floor of your first-ever Isaac run-through.' I have faced down horrors beyond my worst imaginings in Isaac's misery-turd-dungeons, but, to this day, nothing chills my blood like the sight of a few teeny, scuttling spiders. It's not arachnophobia - it's sudden-unpredictable-movement-and-too-small-to-easily-hitophobia. The bastards can lurch suddenly towards me, defying the usual movement patterns I expect from other foes and, God, the number of times I've wound up losing a heart and half to a few spiders who are scuttling around the feet of other, tougher foes I'm steadfastedly dealing with. And don't get me started on enemies that explode into spiders when I kill 'em. Spiders! Why'd it have to be spiders?