There's never been a better time to pick up a new SSD this Black Friday and Cyber Monday season, and you'll find all the best storage deals from today's Cyber Monday sale in our curated hub below. We've scoured the web for all the best SATA, NVMe and external SSD deals we can find taking place in the UK and US, and all of them come with the RPS seal of approval. Finally, we've got some fresh WD Blue SN550 deals for those shopping in the US, and there are also new deals on WD's Black SN750, too. You'll also find Samsung 860 Evo drives for some of their lowest ever prices. So, to help you secure the best savings on today's best SSDs for gaming, read on for our Cyber Monday SSD deals highlights below.

Regardless of whether you're after a deal on the best SATA SSDs or mega discounts on super fast NVMe SSDs and portable SSDs, you'll find all the best Cyber Monday SSD deals right here. I'll be updating this article with more and more SSD deals as and when they go live, so make sure to keep this page in your bookmarks so you can keep up to date with all the latest info.

To help make things nice and easy, I've split the deals up into the best SATA deals, best NVMe deals and the best external SSD deals so you can find exactly what you're looking for with a simple click. All you need to do is click the category you want and you'll be whisked down to the relevant part of the page.

It's not just SSDs that are going cheap over Cyber Monday, either. For more Cyber Monday deals, check out our regularly updated hub pages below:

Some fantastic deals on one of the best budget SATA drives around here, the 250GB model of Crucial's MX500 is currently at an all-time low price, beating last year's Black Friday price and what it cost over Prime Day. Ditto for the 1TB models, which also has a sizeable discount. The 500GB offer is less good, dropping by just a couple of quid, and has been cheaper in the past. At this price, you're better off with the £53 Samsung 860 Evo below.

An oldie but a goodie, the Samsung 860 Evo is our number one SATA SSD recommendation. The 500GB model is the same as what it cost over Prime Day, and is arguably a much better deal than the 250GB model right now.

A great budget option for those after a massive SATA SSD, the WD Blue 3D NAND is currently £50 off its usual price. It wasn't on sale during Prime Day, but this is still the cheapest it's ever been.

At £35 for 250GB, our favourite budget NVMe drive is astonishingly cheap right now. CCL Online's also backed this up with a strong £30 discount on the 1TB model, not quite the £80 all time low I've seen previously, but it's still a great saving nonetheless.

The Samsung 970 Evo Plus is one of the fastest NVMe SSDs you can buy right now, and at these prices, it's a fantastic buy. Unfortunately the 500GB model's hefty £50 discount has since vanished, but we're on the hunt for more deals on these larger storage capacities - stay tuned.

The second fastest NVMe drive after Samsung's 970 Evo Plus, the WD Black SN750 is a great SSD. The 500GB is now back to its previous all-time Prime Day low of £75, while the 2TB model is cheaper than ever, beating its previous Prime Day price of £300 by quite a considerable margin.

Unfortunately some great deals on the regular Samsung T7 have vanished into the void since their debut on Monday, but its fingerprint sensor-enabled T7 Touch sibling still has some strong discounts - particularly the 500GB T7 Touch, which is at a decent low of £75 right now. That's £40 cheaper than its usual price, and £30 lower than its previous all-time low. It's a great buy.

Another top class external SSD, the Crucial X8 is a great alternative to the Samsung T7. It's not quite as diddy as the T7 and T7 Touch, but it supports the same USB 3.2 Gen 2 standard and has exceptional transfer speeds and read and write speeds, beating its Samsung rival. The 1TB model is a particularly good buy now, being £14 less than the T7, but Samsung still has the edge on value at 500GB and 2TB. 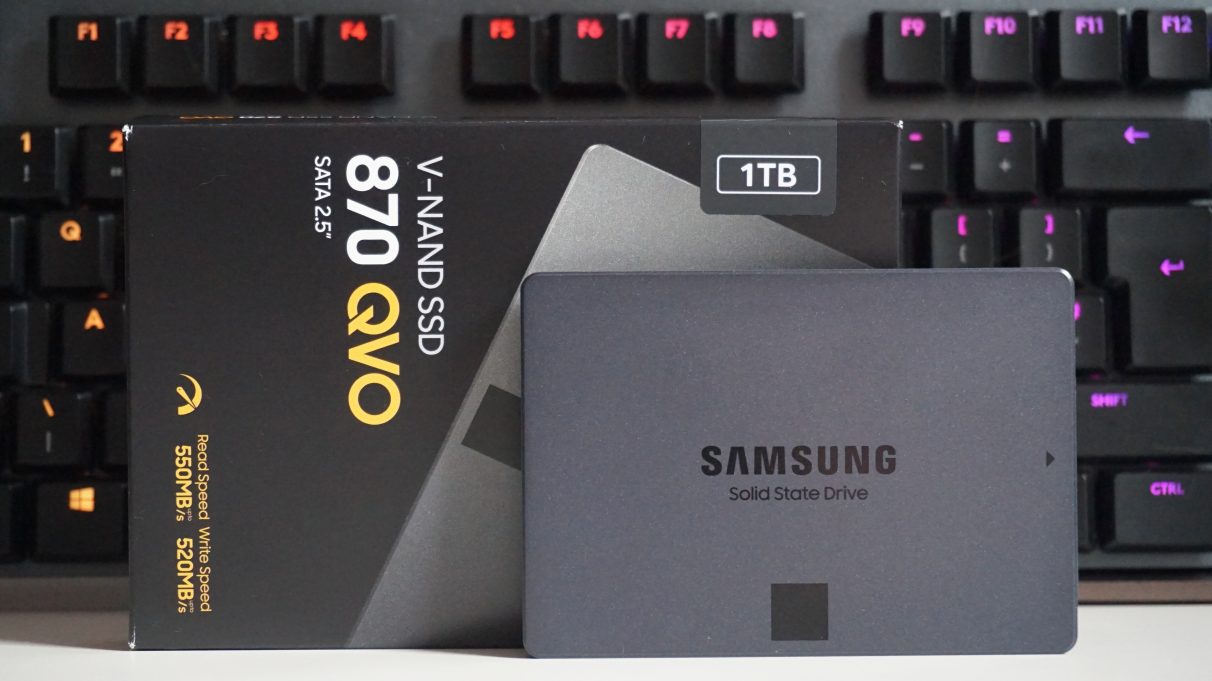 Samsung's 860 Evo is still the best SATA SSD you can buy right now, and both Newegg and Amazon have shaved $50 off the 1TB model. This beats its previous all-time low price during last year's Black Friday sale over on Amazon by $10. The 2TB model is also down to a record low of $200 at the moment as well at both Amazon and Newegg.

Not a great deal in the grand scheme of things. The 1TB model has been $110 for a while now, and was actually down to $100 just the other week. Until a better deal comes along, you're better off getting the 1TB 860 Evo deal above instead.

Not a huge deal compared to its usual prices, but if you're looking for a fast, high capacity SATA drive, the 870 Qvo is a much better buy than its older 860 Qvo and Evo siblings, especially at 2TB.

A great budget alternative to the 860 Evo, Newegg's deal on the 2TB model of this SATA drive is another pretty tasty discount. It dropped to the same price over Amazon Prime Day, giving you another chance to pick up this fantastic deal.

A pretty small deal here, but historically it's still a pretty decent price for this excellent budget SATA SSD. Indeed, the last time it was this cheap was during last year's Black Friday sale, where it fell to $55.

The WD Blue SN550 was one of the key absences from this year's Black Friday sale, but thankfully, Amazon and Newegg have all three capacities on sale as part of their Cyber Monday sale. The 500GB is particularly good, as it's just $5 more than the 250GB model at the moment (and the cheapest it's ever been), while the 1TB model matches its previous all-time low.

Samsung's first PCIe 4.0 NVMe SSD only came out last month, but this year's Black Friday has brought us our first discount on it. Sure, today's saving of $10 means it's still the same price as a 500GB 970 Evo Plus (see below), but if you want to future-proof your PC and get a taste of what PCIe 4.0 has to offer today, this is a rare discount not to be missed.

A new all-time low for the 500GB and 1TB models of Samsung's excellent NVMe SSD, this is a great set of prices for one of today's best SSDs for gaming.

More all-time low prices for Samsung's newer 970 Evo Plus SSD today, and in a wider variety of sizes than the original 970 Evo. It's the best NVMe SSD you can buy for your gaming PC right now, but it's still quite expensive compared to its also very good competition from WD. Still, at least Newegg have matched Amazon on pricing here, giving you more choice in who you buy from.

Newegg have the best 1TB WD Black SN750 deal this year, dropping to a new all-time low of just $116. Previously, its lowest price was $120 over on Amazon, although it's possible Amazon may well drop prices again closer to Black Friday.

Read our WD My Passport SSD review for more info

It may only support the slightly older USB 3.1 Gen 2 standard compared to the latest USB 3.2 Gen 2 speeds like the Samsung T7 Touch below, but the WD My Passport SSD is still a very fast (and great value) external SSD in its own right, particularly compared to Samsung's older T5 Portable SSD.

Samsung's T5 portable SSD is becoming increasingly scarce these days, but it's still a fast external SSD for gaming, and a great budget option to the newer T7 below (although given the Black Friday prices for the T7 at the moment, you may as well spend the extra money in all fairness).

Both Amazon and Best Buy have got the 2TB model of Samsung's latest external SSD for a low of $280 at the moment, which isn't quite as good as $250 the other day, but it's still not terrible value considering its RRP of $360. The 500GB and 1TB models match their previous low prices as well.

Amazon have the 500GB T7 Touch at a $20 discount and the 1TB model at a $60 discount. The latter's a pretty decent deal right now, considering it's Black Friday price was a good $40 pricier.

One of my biggest complaints about the Crucial X8 at launch was that it was just a bit too expensive compared to its Samsung rivals. Happily, this year's Black Friday deals have levelled the playing field for this excellent external SSD, making it a great alternative to Samsung's T7 and T7 Touch with these new all-time low prices.

How to get the best Cyber Monday SSD deal

Speed is one of the most important things to consider when buying a new SSD, and many of the drives on my best SSD for gaming list have excellent read and write times - and I'm not just talking about the crazy-high sequential times you'll see plastered all over an SSD's box, either. These can often reach up to thousands of MB/s, which may sound like good news, but in practice it's not a very good indicator of what kind of speeds you'll get in day to day use. That's because most SSDs read and write data randomly, sticking bits here and there all over an SSD's storage blocks.

As a result, an SSD's random read and write speeds are really what you should be looking out for when selecting your next SSD, which is why I place such an important emphasis on them in my SSD reviews.

Another important consideration is capacity. The minimum size SSD I'd recommend these days is 250GB, as this will give you enough room for your Windows installation (around 20GB), a few big games, plus all your music, photos and any other creative / productivity programmes you might need. If you'd like to have more than a couple of big titles installed at once without compromising on load times, however, you may want to consider finding the cash for a 500GB or 1TB SSD.