If you've ever looked at your pet in Diablo III and thought "it's a shame that's not a miniature version of a high-tech flying battleship", then I've got some good news. To celebrate the 20th anniversary of StarCraft's release, Blizzard are giving out some free bits and bobs for StarCraft: Remastered, StarCraft II, Diablo, Overwatch, World of Warcraft, Heroes of the Storm and Hearthstone. You play at least one of those games, right?

I find something undeniably icky about the phrase "cross-franchise celebration", despite having no real objections to what it entails. Maybe it's just that in whatever context it crops up, I can't help but recoil at the f-word.

Ok, I've un-recoiled - let's see what we have here. Stacraft: Remastered and StarCraft II are receiving retro UI skins, along with some new player profile portraits for the latter. Those will both become available tomorrow, as will a Sarah Kerrigan Ghost skin for Overwatch's Widowmaker and a delightfully incongruous Battlecruiser pet for Diablo III. 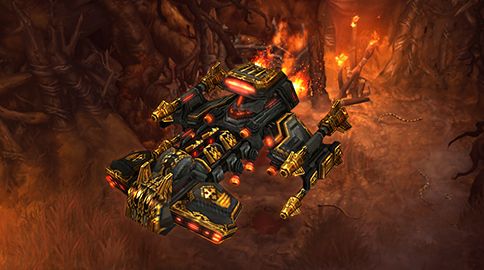 On March 21st you can get three Kobold and Catacombs card packs for Hearthstone. Then on March 27th, if your insatiable appetite for classic StarCraft player profile portraits hasn't been appeased, you can get some of those for Heroes of the Storm. Finally from March 31st, if you can track down one of the StarCraft pets that already exist in WoW and salute it, you'll get one of those fancy "Feat of Strength" achievements. You can get all of the other rewards just by booting up the relevant game.

You'll also have to wait until March 31st for a documentury called "StarCraft is Life: A Celebration", in which "some of StarCraft’s biggest fans look back on their favorite memories from the past 20 years."

Perhaps of more interest than the freebies is the flurry of articles that Blizzard have featured as part of their anniversary celebrations. There are interviews with esports types and developers, but the headline that caught my eye was "Checking in with the DeepMind StarCraft II team". DeepMind is Google's ongoing attempt to build an artificial general intelligence - an AI that can teach itself to accomplish almost any complex task. DeepMind made headlines last year when their "Alpha Go" AI beat renowned Go champion Lee Sedol, though researcher Oriol Vinyals is less confident about DeepMind's chances against top StarCraft players.

"What I like about our approach is that, if it all works out, the agent has learned a very large variety of tactics and counters that couldn’t possibly be programmed, in the same way you couldn’t program a very good Go player.

In terms of beating the very best — I don’t know. That’s to be seen. I cannot predict whether we will be able to beat them or not."

I reckon he's just being modest.